If there’s one thing everyone in an office is interested in it is office acquisitions. Be it the basics like pens and paper, niceties such as fridges, microwaves, toasters and chairs that don’t induce Total Spinal Spasmodic Painful Muscle Failure Disorder, or extravagances such as a foot massager that features tea and coffee making facilities, everyone has an opinion about what they want and need.


Moreover, though most get lumped with whatever PC they’re given, the smart people get the ear of the head of IT and make a few suggestions as to what would be best. After all, who wants to develop tunnel vision because they spend eight hours a day staring at a 14 inch 4:3 monitor? Thus, if you happen to be that smart person or even the person in charge of IT purchasing, it’s time to sit up and take notice because Acer’s latest Veriton M460 PC is meant for you. 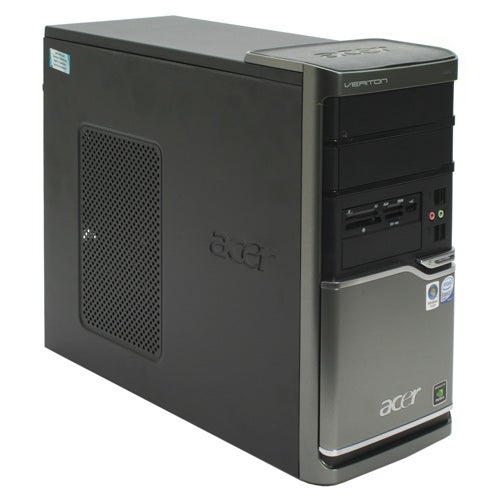 
For a business PC this is a very well specified machine, with Gigabit Ethernet, an 8x DVD+/-RW optical drive and 7-in-1 memory card reader rounding off the essential features quite amply. Indeed, given this specification it’s probably worth thinking about what you actually need, because in many respects this machine represents more performance than the Average Joe office worker really needs. No, this is for the heavier users who need a machine that’ll run seamlessly whatever the circumstances and not fall over the moment something fails.

If this version is a little hot for your requirement Acer does produce another version, which is nonetheless very capable. This comes with an Intel Core 2 Duo E4500, a dual-core chip that runs at a perfectly sprightly 2.2GHz. It also sacrifices some storage space, using a 160GB drive, while also resorting to an integrated Intel X3100, 1GB RAM and XP Professional. Otherwise it’s more or less the same system, but it’ll cost in the region of £320 – over £200 less than the quad-core system.

As a case design the Veriton M460 is predictably simple, but nonetheless it feels well put together and not unattractive either. Finished predominantly in a gunmetal grey it features hidden optical drive bays, with lots of large and friendly buttons that aren’t at all fiddly to operate. Rather like the Dell XPS 420 there’s also a rubberised platform on the top of the case, which can be used to store odds and sods such as USB keys and other detritus and is really quite useful.


Measuring 18cm wide, 44.15cm deep and 36.7cm, the system should fit easily under any standard office desk, especially those with spaces designated for mini tower cases such as this. On the front there’s plenty of connectivity, with three USB ports and a full set of memory card reader slots taking up one of the external 3.5 inch bays. With a standard DVD+/-RW optical drive taking up one 5.25 inch bay, this leaves one of each bay size open for adding extra devices such as tape drives or an additional optical drive. 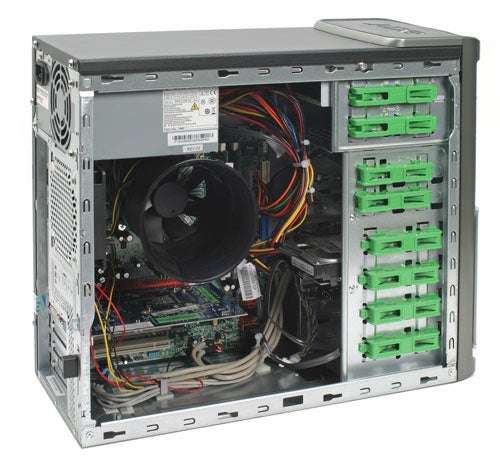 Moving to the back of the machine you’ll find a good mixture of modern and legacy connections. This means you get two PS/2 ports for a keyboard and mouse, along with Parallel and Serial connections as well. After these you’ll find four more USB ports, bringing the total up to seven and all the usual ports such as Ethernet and audio outputs. One thing that is lacking is FireWire and though this isn’t readily in use in offices if it’s something you require this system probably isn’t for you.


Internally there’s some space for expansion, with two free PCI slots and a single x1 PCI Express bay, though this is partially obstructed by the graphics card that’s sitting in the x16 PCI Express bay. It’s also worth noting that the optical drive in our system was connected via SATA, so there is one less SATA connection available were you wanting to add extra hard drives. 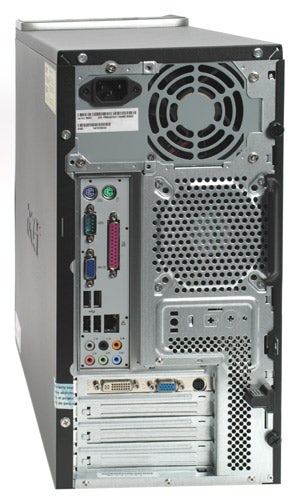 Moreover, getting hard drives in and out is tad tricky due to the bays exiting out into the case rather than out of the side, which would make it a lot easier. That said this isn’t the kind of system that’s likely to be customised all that often, if at all. This is underlined by the fact that there are only two memory slots, both of which are taken up by 1GB DDR2 modules.


Also not of especial importance are the peripherals, which are about as cheap and simple as you’re likely to find. Though the mouse is perfectly reasonable, the keyboard is distinctly ordinary thanks to some woolly feeling keys that provide little in the way of feedback. Some media shortcut keys do add a little extra value, but for prolonged office work you’ll want to invest in something a little more durable and pleasurable to use.

Thankfully, this is one of the few real disappointments when it comes to this machine. In use it remains mercifully quiet, even when running stressful applications. This is due in no small part to the large exhaust fitted around the CPU, which funnels out through a large vent in the side of the case. This enables the main case fan to spin relatively slowly, maintaining a low level of noise as a result.


And, while the machine remains cool and quiet during general use, as our testing shows, it’s also a very powerful and fast number cruncher as well. For testing we’ve run our usual array of tests, including PCMark05, PCMark Vantage and our own in-house single and multithreaded benchmarks. 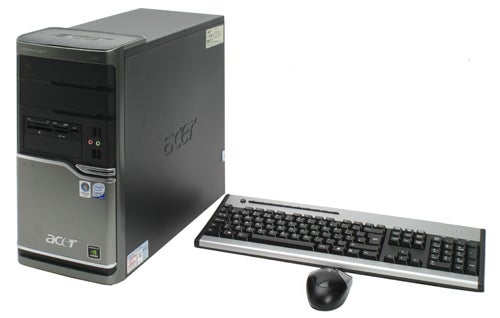 Performance is very strong across the board, with the combination of 2GB DDR2 RAM and the Intel Core 2 Quad Q6600 managing to work its way through most applications with relative ease. As such, during general use it’ll barely break sweat and it’s only when you start throwing processor intensive tasks such as video conversion that the system is really stretched to its limits and even the nature of the quad-core CPU means you can continue to work uninterrupted.


Bearing this in mind, should you buy the Veriton M460? Clearly for the price it’s a very well put together system, offering the kind of performance that’ll keep people happy for a long time to come. However, as touched upon earlier, for some it may be more than they need and in that case the cheaper version may be a better bet, especially if you need to invest in a new display(s) at the same time. 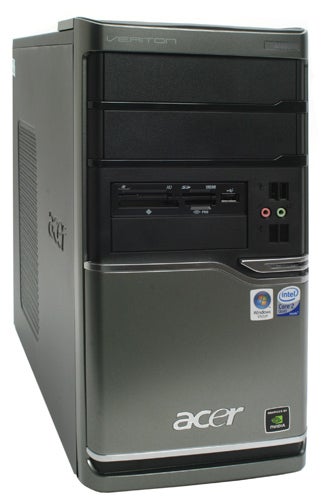 In addition, a quick look at alternatives shows that you can get hold of a similarly specified Dell Vostro 400, which is available with 3GBs of RAM and dual 250GB HDDs for slightly less than this Acer machine. This is obviously a compelling option and though the Acer Veriton M460 is still very good value, that there’s a marginally cheaper and better specified machine out there does make the Acer a slightly less attractive proposition.


A powerful and reasonably priced business desktop, the Acer Veriton M460 is only eclipsed by the availability of a marginally cheaper and higher specified machine from Dell. Nonetheless, it’s a very good system and if you’d rather not go with Dell then this system will still provide you with plenty of flexibility and longevity.