While Acer is best known for its PC-related products, it claims that its new V7500 projector has been designed from the ground up with home theatre in mind. Key features of the single-chip DLP model include a dynamic contrast system, a built-in light sensor that can adjust the image to compensate for your room conditions, 3D playback, and an eye-catching price of £629.

The V7500 looks quite striking thanks to its wide but shallow shape, centrally mounted lens, rounded corners, arched molding around the lens barrel and glossy white finish. It certainly looks more like a home rather than office machine, which immediately lends credence to Acer’s assertion that the V7500 is first and foremost a home-entertainment model. 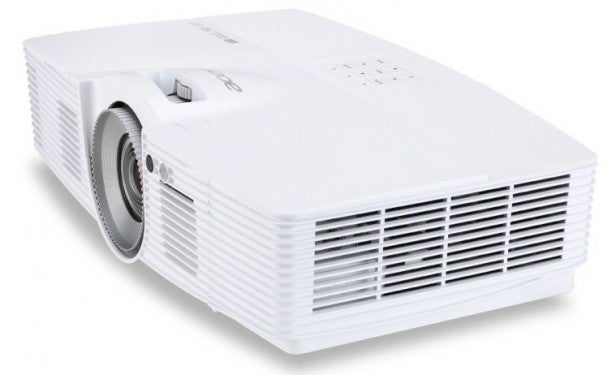 I was impressed to find a removable cover on the the right-hand side of the V7500’s bodywork, under which it’s possible to hide the tangle of cables that would normally spill messily out of a projector’s rear panel.

Its connections include two HDMIs, both capable of handling 3D video, along with composite, component and PC VGA jacks and an audio-line throughput. The latter jacks are present for the V7500’s built-in sound system – in this case, a 10W mono affair.

The optical system is more interesting than most thanks to Acer ColourPurity. This technology is said to limit the rainbow effect problem (red, green and blue stripes over bright parts of the image) associated with single-chip DLP projectors, by combining an RGBRGB colour wheel design with “unique lamp control techniques”.

This same combination of technologies is also claimed to deliver a wider colour gamut than you’d usually achieve from affordable projectors; a full 100% of the photography-friendly sRGB colour gamut, in fact.

Also unexpectedly promising for such an affordable projector is the V7500’s Dynamic Black system. This continually analyses the image content and adjusts the amount of light emitted by the lamp accordingly.

It should be said that these types of dynamic light systems can sometimes make pictures worse rather than better, but I’m hopeful that this will be one of the better ones given the impressively high contrast ratio Acer claims for the V7500.

It’s interesting, too, to see Acer providing the V7500 with a “LumiSense” light sensor to take your individual room conditions into account during its picture auto-optimisation process.

Personally, I wouldn’t bother with the light sensor, and instead recommend that you watch the projector in as dark a room as possible. But I also accept that this isn’t always practical, so it could be that Acer’s light sensor comes in handy – so long as its judgments of how to adjust the picture prove to be on the money.

Another of the V7500’s interesting features is the EcoProjection mode, which claims to reduce power consumption by 70% and extend the lifespan of the projector’s lamp to around 7,000 hours – well above the norm.

As noted in the introduction, the V7500 supports 3D playback. Although, as is increasingly the case these days, Acer failed to provide any 3D glasses with which I might have tested its projector’s 3D capabilities.

The V7500 is straightforward to get up and running, but also flexible enough to support a fairly sophisticated calibration.

Getting the picture on your screen involves simple but reasonably “tight” zoom and focus rings around the lens, with the zoom extending to a respectable 1.4x. There are also screw-down legs on the rear corners of the unit if you need to tilt the projector slightly to position its pictures correctly.

The likelihood that you’ll need to use them is reduced by the provision of a vertical image shift wheel, however, which sits just about the lens. It’s practically unheard of for a projector as cheap as the V7500 to carry vertical image shift, but it’s a hugely welcome discovery since it greatly reduces the likelihood of you having to use image-distorting keystone correction to keep the edges of your image perpendicular. 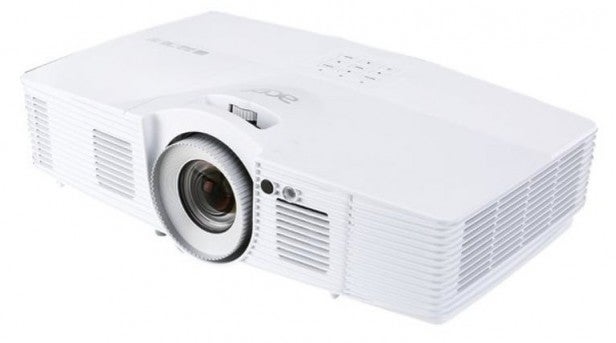 While seeing such “serious” calibration systems on a projector at this price is impressive, it’s also good to discover thoughtful, casual-use touches too. These include a selection of colour-compensation options for those who may be projecting on to a wall rather than a screen, and a series of helpful picture presets.

Of the settings available, I found the most useful to be the Movie preset with gamma curve set to 2.2; Eco mode turned on (to boost black levels); Black Extension turned off (as it crushes out shadow detail); LumiSense set to off on account of the big increase in running noise it causes; and White Peaking set to 8.

Some may prefer to turn off the BrilliantColor feature too, although in this instance I quite enjoyed the slight extra colour kick it introduces – especially since it doesn’t cause extra noise and grain like it can on some implementations.