When looking at notebooks intended for corporate users, one always has to change one’s perspectives. In consumer notebooks the buzz words are style, multimedia and entertainment, whereas with corporate lines they are invariably reliability, build quality and flexibility – with security often thrown in as well. When looking at an ultra-portable, as the Acer TravelMate 6292 claims to be, there’s a whole raft of other important considerations such as portability, durability and battery life. Satisfying all these different demands isn’t necessarily easy, though these days manufacturers seem more adept than ever at pulling everything together. Has Acer managed this with this new offering? 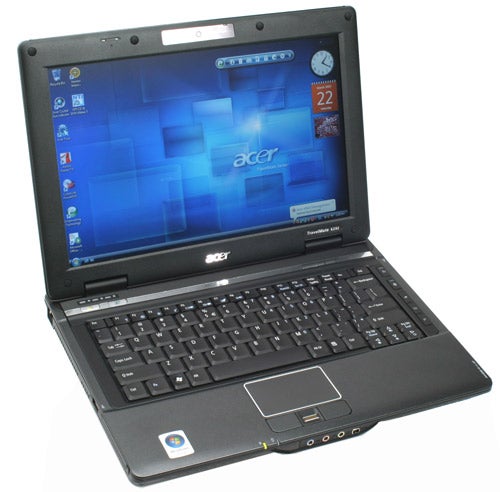 On the inside at least, Acer hasn’t missed too many tricks. As a company it has a reputation for putting out powerful hardware at competitive prices, and the TravelMate 6292 continues this trend. Our review sample (model number 6292-302G16N) is available for around £1,050 and sports an Intel Core 2 Duo T7300 clocked at 2.0GHz, with 4MB L2 Cache and an 800MHz Front Side Bus. This is ably supported by 2GB 667MHz DDR2 RAM, a 160GB SATA hard drive, integrated Intel X3100 graphics and a Super-Multi DVD burner drive.


Network connectivity is well supported too, with 802.11a/b/g/Draft-N wireless and Gigabit Ethernet as well as Bluetooth 2.0 EDR, a Fast Infrared port and the obligatory 56k software modem for legacy support. Regrettably, there’s no HSDPA as yet, though it shouldn’t be ruled out as a future possibility. That accepted though, the 6292 is well catered for and a PC Card slot means HSDPA functionality could be added via a third party 3G card. 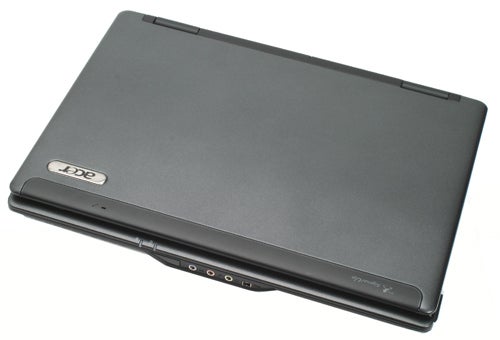 The chassis, as is common in the ultra-portable bracket, is based around a 12.1in display with a 1,280 x 800 native resolution. With dimensions of 306mm wide and 227mm deep, the 6292 is nicely proportioned for carrying easily, fitting as it does nicely under the arm. The outer casing of the battery casing is even textured, providing a better grip for carrying.


However, this is by no means the lightest or thinnest ultra-portable that’s hovered by the TR labs. Indeed, at 34.5mm thick it’s on the chunkier side and with the standard 6-cell battery it weighs just shade over 2kg at 2.05kg. This is on the heavy side for notebook on this size, and ideally a weight of in the region of 1.8kg or less would be preferable. It doesn’t completely scupper its portable credentials, but the 6292 is noticeably heavier than its peers.

Some of this extra bulk may be attributed to a more pointed emphasis on durability. Parts of the outer casing are magnesium plated, adding to the weight but providing a highly durable and scratch proof surface. The addition of hard drive shock proofing is further evidence of this, though all this hardly ranks in ToughBook territory. Still, overall the 6292 feels well made and could probably deal with bumps and scrapes well enough. 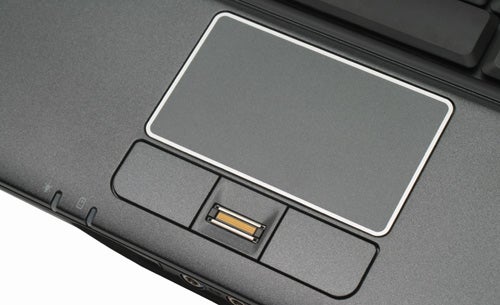 This can only be a good thing, though whether the extra weight justifies this rather depends on your point of view. To my mind you either buy a rugged notebook or you don’t, and though this is well made there’s no real guarantee how it will react to any problems. Therefore, if portability and proven strength are your requirements then the like of Panasonic’s admittedly expensive ToughBook CF-Y5 is a far better investment.


Overall the design is as functional as you’d expect from an executive style notebook. It is based, so says Acer, on its new ‘ProFile’ design – the updated basic appearance for the entire TravelMate range. What this is meant to represent isn’t entirely clear, though that’s hardly a great issue. This is after all a businessman’s notebook and the various shades of dark grey and black are nothing more than the norm. 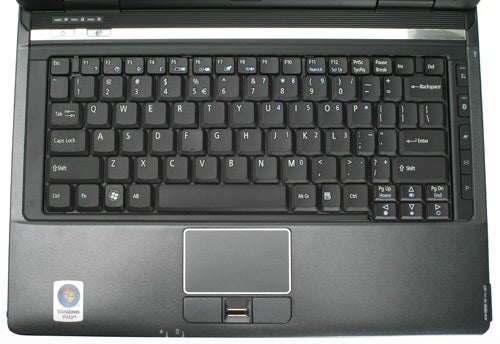 Indeed, ‘the norm’ sums up this design rather well. Though these kinds of notebooks are never things of great beauty, that doesn’t mean there isn’t space for neat touches and inspired design, however there’s nothing of great note here. That isn’t to say it’s bad: it’s tidy enough, but nothing immediately jumps out at you and says “I’m clever”. A fingerprint reader, shortcut buttons and a 0.3 Megapixel camera are all useful additions, but none are that noteworthy and are just likely to be found on any other notebook.


Another aspect that’s a tad disappointing is the keyboard. Our sample came with an American layout, which is never ideal, but even taking this into consideration there are aspects that could certainly do with changing. For example, the Page Up and Down keys are situated around the cursor keys, but they aren’t offset as on many notebooks and as such their locality to the right Shift key makes them prime targets for accidental presses. Similarly, the half sized comma key isn’t ideal and as a whole this isn’t the best layout.

In a more general sense though, the keyboard isn’t that pleasant to use. Keys are ever so slightly leaden, and don’t have that crisp response that’s so desirable on a notebook keyboard – or on any keyboard for that matter.

This subdued reaction to the keyboard can equally be applied to the display. The thick bezel has already been touched upon but the display as a whole is fairly average, particularly in terms of brightness. It’s still perfectly usable, but Acer could have done better.

Moving to connectivity, there isn’t a great deal that Acer has missed out. The left edge is dominated by the primary air vent; however there is space for an Ethernet port, a single USB port and a PC Card slot – which as previously noted should be useful for adding HSDPA functionality.


Two fairly weak speakers are enclosed into the front edge, with audio inputs in between them. There are headphone, microphone and S/PDIF jacks as well as a 4-pin FireWire port and, somewhat unusually, an infrared port. This enables transferring files from other infra-red enabled devices such as mobile phones, though there is Bluetooth 2.0 EDR as well.

Meanwhile, on the left there’s the optical drive, with a card reader, two USB ports and a modem port arranged either side. The card reader supports SD, MMC, Memory Stick, Memory Stick Pro and xD formats while the two USB ports are mounted horizontally above and below each other, which could present a problem if using larger USB devices. Finally, there’s also a lock slot for securing the notebook should it be required.


Video connectivity is reserved for the back of the notebook, with D-Sub and 7-pin component/S-Video on hand. These connections are joined by the DC-in, all of which are situated to the left of the battery pack. Underneath there’s also a port replicator connection, which supports Acer’s ezDock II/II+. The connection is protected by a removable rubberised cover, which would doubtless be easy to lose.

Acer’s ezDock II+, available separately, reproduces most of connectivity of the notebook itself, while adding a plethora of further connection options. These include legacy keyboard and mouse connections, a Serial port, a Parallel port, an ExpressCard slot, six USB 2.0 ports, two FireWire ports (one 4-pin, one 6-pin) and a DVI-D port.

For testing the 6292 was put through the usual set of benchmarks, including PC Mark 05 and our own Photoshop and Virtual Dub rendering tests. For purposes of comparison the Dell Latitude D630 was used, another corporate notebook which walked away Recommended Award earlier this month. It shared a very similar configuration, and performance ought to be very comparable.

This proved to be the case. PC Mark results were more or less the same, with some variance that’s barely worth mentioning. In our in-house tests the results were similarly close, with the 6292 being a matter of seconds slower than the D630 in Photoshop tests and almost identical in the Virtual Dub test.


By ways of a more general observation, the combination of the Intel Core 2 Duo T7300 and 2GB RAM under Vista seems a good one. A lot of recent notebooks have come with this configuration, and this is a typically competent specification that deals with the higher overheads of Vista perfectly well. Alternatively, Acer is also selling a different configuration, the 6292-101G16N, which features a 1.8GHz Intel Core 2 Duo T7100 instead of the 2.0GHz T7300. It’s also worth noting that, although our sample came with Vista Business, Acer has since begun shipping these with XP Professional instead. A reaction to the (un)popularity of Vista? Quite possibly. 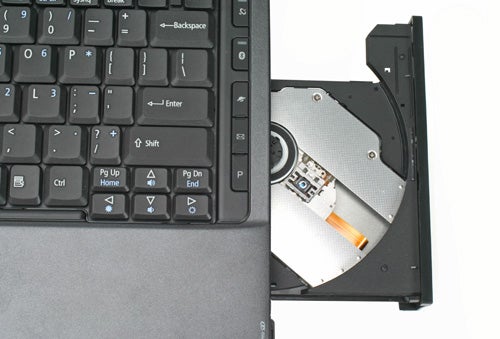 Battery life was tested subjectively, using the notebook for basic word processing and Internet browsing on the Balanced performance profile, with full display brightness and wireless enabled. A result of two hours and 50 minutes was good, though not as good as another 12.1 notebook, the Samsung Q45, which managed three hours and 20 minutes under similar conditions. As ever there’s an option for a larger 9-cell battery, and this would certainly extend the battery life closer to five hours.


Overall, the TravelMate 6292 is very typical of Acer notebooks. It’s well specified and competitively priced and this immediately makes it an attractive option. But, on this occasion, Acer hasn’t quite delivered on every front. For a 12in notebook it’s definitely a few hundred grams too heavy, while some of the design features such as the thick bezel, average keyboard and the display could be improved upon. Despite these reservations though, this is still a very capable notebook and is well worth considering if you’d take performance in lieu of weight and portability.