The Apple iPhone popularized multi-touch to the extent that it’s now a must-have feature on phones and is gaining prominence on PCs too. Ever since the launch of the excellent Microsoft Windows 7 every PC can potentially accept touch input – all that’s necessary is the physical means. If you’re buying a new system you can just go for something like the Acer Aspire 5738PG or multi-touch equivalent of the Asus EeeTop ET2203T, but if you want a desktop system you’re down to two options: either the Wacom Bamboo Pen & Touch tablet or a touch-screen monitor, such as the Acer T230H we’re looking at today. 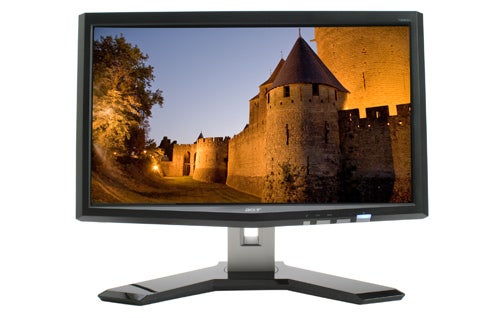 While we’ve already caught glimpses of other Full HD multi-touch displays, including the 21.5in Dell SX2210T and 22in Iiyama ProLite T2250MTS, Acer beats these options soundly with a screen size of 23 inches. Not only that, but it would also appear to have quite an edge when it comes to adjustability. Of course, it needs all the advantages it can get to justify a price tag of nearly £300.


Opening the unusually large box up, first impressions are good. Acer’s generous cable provision includes VGA, HDMI, USB A to B, and 3.5mm audio. DVI is the only absentee, though the connection is included on the monitor. The T230H itself arrives in two parts. The screen with attached leg turns into the base, and after tightening a thumb-ring screw you’re done. While not quite as simple as the click-in and go system utilized by Dell’s superb UltraSharp U2410, it’s easily up there with the best of the rest.

Once assembled, it’s not only heavier but also more flexible than many other monitors. In fact the stand is eerily similar to that used on the older Dell UltraSharp 2408, which is certainly no bad thing. The V-shaped base is solid glossy black plastic over a metal frame, with not a hint of creak or flex. The monitor’s neck is a slim two-tone metallic silver and matte black affair. It doesn’t feel quite as solid but is well-built nonetheless, and more importantly offers a good range of adjustments.


After releasing a locking mechanism the Acer T230H offers 110mm of height adjustment, a decent amount of swivel and 20 degrees of tilt. Only pivot is missing from this list, but thankfully that’s the least-used of the lot and is never ideal on a TN due to the technology’s inherent limited viewing angles. Adjustments are fairly easy to make, though if you push the monitor to its lowest (about 5.5cm off the desk) you have to unlock it again. 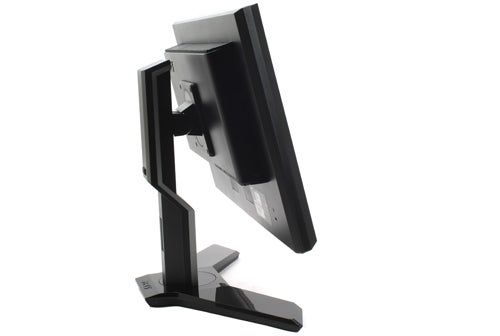 Unusually aggressive angles combine to give the T230H a very distinctive design that matches the aesthetics of Acer’s Predator gaming machines. Personally I think it’s an attractive choice despite giving the monitor a slightly bulky appearance, the latter of which is not helped by a wide matte bezel of up to four centimetres. Only the rectangular blue power LED spoils things a little by looking rather cheap.

Just like its styling, Acer’s control implementation for this monitor is quite unusual. It provides physical buttons on the tilted bottom edge of the bezel, marked by clear white icons along the bezel’s front. However, only the ‘power’ and ‘e’ functions are regular buttons; left/right and auto/menu are controlled by two-sided rocker switches with raised edges, making finding the right control in the dark a breeze.


Once you get used to this atypical arrangement it works well enough, although Acer’s choice of small, mostly monochrome menus doesn’t provide much visual appeal. A dedicated source button for switching between VGA, DVI and HDMI would also have been nice, though to be fair the monitor does automatically switch to the next active source if you deactivate the one it’s on.

The ‘e’ button lets you switch between a sensible selection of User, Text, Standard, Graphics and Movie presets. However, navigation isn’t always intuitive. Aside from the presets, brightness and contrast can only be altered in the menus, as the left/right buttons double as volume controls. Furthermore colour balance can only be altered under Temperature, which includes Warm, Cool and User options.


At 23 inches and with a 1,920 x 1080 resolution there’s plenty of screen real estate, but the first thing you’ll notice about the T230H itself is its highly reflective glossy coating. It really is like a mirror, more so even than normal glossy displays. It’s not just distracting with dark material either, but is even a problem on a white background.


On the plus side it does give colours the appearance of being more vibrant and also increases perceived contrast, which is a good thing since the monitor’s actual performance makes an absolute mockery of its claimed 80,000:1 dynamic contrast ratio. As is usually the case with TN-based monitors, you can get pure whites or more dark detail, but not both at the same time. Even then, the T230H failed to show the darkest gradations of the greyscale no matter how carefully we calibrated it. Noticeable backlight bleed along the bezel’s bottom edge and slight banding across some colour gradients further spoil things. 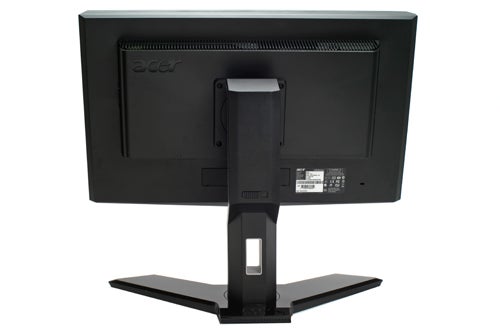 It’s not all bad news though. Excellent sharpness means even the smallest fonts are legible and horizontal viewing angles are particularly good for a TN-based display. Indeed they’re easily among the best we’ve seen on this kind of panel, though vertical ones are as poor as ever. With its 2ms response time there’s not a hint of ghosting either, so despite the very subtle dark details you might be missing out on, this is a decent display for gaming – just don’t mistake your reflection for a monster in the heat of gunplay.


Before we get onto the T230H’s touch abilities, the performance of its speakers is also worth a mention. These receive audio either through HDMI or from the 3.5mm analogue input, but don’t do a very impressive job. While they manage decent volume levels, distortion does creep in now and then despite their utter lack of bass, and the soundstage they create lacks any sense of depth. It’s quite baffling that Acer has decided not to include any kind of audio output either.

Onto the main event, let’s see if this is the multi-touch device to get. Installation is very simple. There’s no separate software to install; just plug the included USB cable into the monitor and your computer, and you’re ready to go. As long, that is, as you’re running Windows 7 – but then there’s not much attraction to touch with an older Windows OS anyway.


Unlike some other touch devices we’ve looked at, the Acer T230H is also perfectly calibrated out of the box. However, there is a slight issue with accuracy due to the touch technology used. Acer implements the same ‘optical’ touch sensing technology as the HP TouchSmart PCs, which relies on optical sensors integrated into the bezel at the screen’s corners.


This is a radically different (and cheaper) approach to capacitive or resistive, and means you don’t actually have to touch the screen at all; the sensors will pick up your finger (or indeed any other object like a stylus or piece of paper) about 1mm away from the screen. However, while it’s great to have even the lightest touch register flawlessly, it does mean your other fingers can inadvertently ‘press’ too, which can be especially annoying when using the on-screen keyboard. 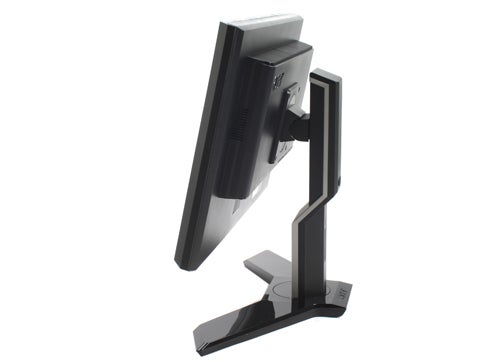 Overall though, the T230H’s touch experience is very good. Its glossy surface makes for a smooth feel and the technology allows you to use two fingers at a time for multi-touch rotate, zoom and scroll. Though you’ll spend quite a bit of time cleaning off fingerprints after use, navigating your way around Windows is a fairly painless process. The heavy, solid base means you can poke the screen with some force without causing any wobble.


Most importantly, how does Acer’s £290 multi-touch monitor hold up in the value stakes? It’s actually quite well positioned against the competition (though it’s worth keeping in mind its sub-par three-year carry-in warranty). The aforementioned 21.5in Dell SX2210T comes in at well above £300, where an integrated webcam really doesn’t make up for its smaller size and lack of adjustability.


Meanwhile the Iiyama ProLite T2250MTS is cheaper than the T230H but likewise lacks adjustments beyond tilt, is still smaller at 22in, and offers less connectivity. For now it’s probably safe to say that the T230H rules the roost, especially since it’s the biggest consumer multi-touch monitor available. 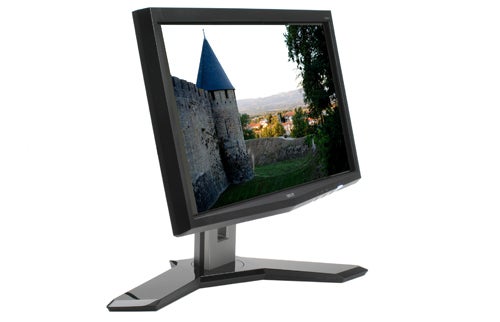 However, we’re still not convinced of the need for touch capabilities on a monitor in the first place. Basically, on anything that you can’t hold in your hand or at least lay flat on a desk or your lap, touch is nothing but a nice extra (unless you enjoy having sore arms) and not worth its considerable premium. For example, £300 will get you the excellent MultiSync EA231WMi, with even better adjustability and a vastly superior IPS panel that will give you image quality on a whole other level.


Acer’s Full HD, 23in T230H might be the best of its breed, but ‘touch’ remains a feature that’s not worth its substantial premium unless you specifically need it.