What is the Acer Swift 7?

Acer’s Swift range of laptops (headlined by the excellent Swift 5) is designed to be as portable as possible, and the all-new Acer Swift 7 keeps that vision alive. Measuring just 8.98mm at its thinnest, the Swift 7 is currently the world’s slimmest laptop – at least according to an internal Acer survey.

But the question is: have any sacrifices been made to shave off a few millimetres here and there? Or is this really one of the best portable Windows laptops of 2018? 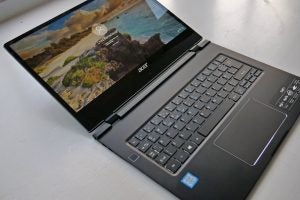 As soon as I slipped the Swift 7 out of its box, I had to simply hold it aloft and gawp for a minute or so. This thing is slimmer than most tablets – hell, it’s skinnier than a lot of magazines. You could probably use it to chop your courgettes, but at £1500 a pop, I wasn’t going to test out that theory.

Even after a few days of use, that initial awe has barely waned. The Acer Swift 7 is a fully-functional testament to the evolution of laptop technology, from the display to the chipsets and drives. Compared with chunky notebooks from yesteryear, this machine almost seems like science fiction. 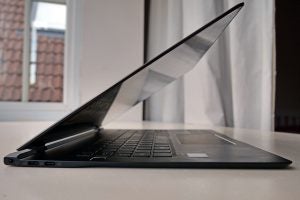 However, while the Swift 7 is incredibly slender, it’s not as light as it looks. The 1.2kg weight is surprising, given the ultra-thin chassis. That heft bestows a more premium feel, complementing the rugged-look design. As skinny as this thing is, it feels solid enough to withstand basic wear and tear. But as with any laptop, we recommend investing in a well-padded case.

This laptop may be super-slim, yet it isn’t quite as compact as the likes of the Dell XPS 13 or Huawei’s MateBook X Pro. Thanks to the 14-inch build and the rather thick bezel beneath the Swift 7’s display, you’ll still struggle to fit this laptop into a handbag or smaller man-bag. For carrying around, it’s better suited for a briefcase or backpack.

Although Acer’s design could be fairly described as ‘simple’, this isn’t necessarily a bad thing. The plain lid and rather straightforward interior may not scream ‘premium’, but I prefer that to a dense coating of bling.

You will also stumble across the occasional nice bit of detailing, such as the matching glossy banding around the touchpad and the fingerprint sensor, or the subtle branding along the hinge bar. 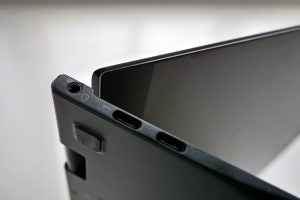 Frankly I’m surprised that there’s any room for ports along those skinny edges, but Acer has served up the bare minimum of what most consumers would expect. Two Type-C USB ports have (only just) been squeezed onto the left side, next to the headphone jack. These can be used to charge the laptop, as well as transfer data from other devices. On the opposite side, you’ll find a SIM tray positioned alongside the power button. And that, as they say, is that.

Scaling back the connectivity is certainly an uncomfortable sacrifice, and one that’s pretty much unavoidable here. That said, Acer has at least bundled a USB hub in the Swift 7’s box – something which Apple doesn’t do with its recent Thunderbolt-only MacBook Pros. This hub plugs into one of those USB ports and gives you a full-sized USB 3.1 to play with, plus an HDMI connection for outputting to displays. Thankfully there’s also a replacement Type-C port. 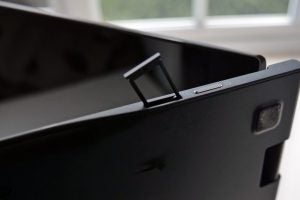 Unfortunately, the narrow bezel above the display means that the Swift 7’s webcam has to be housed underneath that screen. As with the Huawei MateBook X Pro and Dell XPS 15 2-in-1, cameras mounted so close to the laptop’s centre mean that whenever you power up Skype, Google Hangouts or the like, people at the other end will be treated to a charming view of your nostrils.

I was curious how the Swift 7’s keyboard would turn out, given the laptop’s slender frame. I use my laptops to smash out endless reviews, scripts and emails, so a comfortable typing experience is high on my list of demands. And despite the waif-like figure, the Swift 7 certainly delivers.

Although cursed with shallow travel, Acer’s backlit board is well constructed for touch-typing. The chiclet keys are nicely separated and clearly defined, so I was reaching peak speeds without so much as a glance at the keys in no time.

Admittedly, the Caps Lock key is rather squashed over on the left side, while the Escape key isn’t exactly gifted much space. But this reduced stature never posed a major problem. The only time I struggled was when using the arrow keys, which are squashed along with Page Down and Up keys in the bottom right corner. 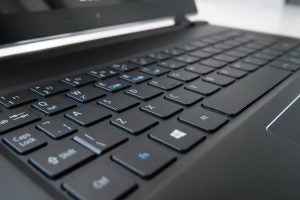 Even that didn’t bother me for long, however, as the Swift 7 sports a touchscreen display. You can quickly navigate through documents, webpages and the like with a poke or swipe of the screen, which is always refreshing.

As a result, I found myself mostly ignoring the spacious touchpad, which is kind of a shame. Not only is it well-sized – just like Apple’s MacBook pad – it’s also perfectly responsive to all of your gestures, multi-fingered or otherwise. There are no built-in mouse buttons, so you’re limited to double-taps and the like for right-clicking or selecting text. However, once you get used to that system, it works well. 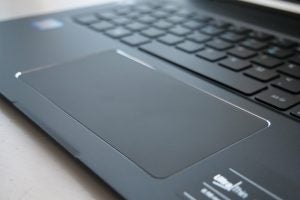 Alongside the keyboard you also get a fingerprint sensor, for bypassing your password or PIN. This is slightly indented, so easy to find without looking (or at night). I found I always got an accurate read, so I never had to repeat the scan, unless I was eating greasy snacks at the time.

At this price point, my expectations for a laptop’s display are always high – after all, the Swift 7 is in the same bracket as the likes of Apple’s MacBook Pro. Thankfully, Acer’s 14-inch IPS panel is well up to pretty much any task.

The lid can be pushed all the way back until it touches the desk, so you’ll have no problem finding a comfortable viewing angle. I found that the screen was just about bright enough to counter direct sunlight too, although the glossy finish certainly doesn’t help with reflections. 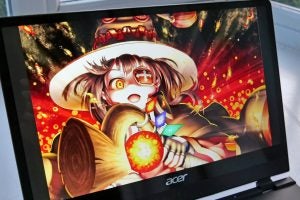 One rather troublesome quirk with my initial review model was the inability to dial down the screen brightness, either with the function buttons or in the menus. Thankfully a replacement model was swiftly despatched and this time the display behaved itself.

Picture quality is fantastic, rivalling other professional laptops around this asking price. The Full HD resolution keeps images sharp, while colours are also accurately represented. Full coverage of the sRGB range will suit any photo editors, and vibrant hues offer plenty of punch. Coverage of 76% of the Adobe RGB gamut is typical. Contrast levels are respectable, and I had no trouble making out finer details when watching films with darker scenes. 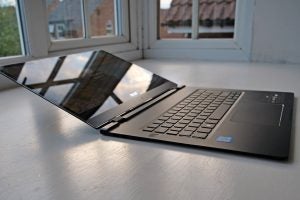 A pair of downward-firing speakers pump out audio on demand, and while the sound is aimed away from your face, I found that it wasn’t too badly smothered as a result. If you’re watching a show or listening to a podcast while fixing dinner in a noisy kitchen, you’ll have no trouble making out what’s said.

Of course, if you’re hoping to turn your study into a mini-disco, you’re best off hooking up an external speaker. The Swift 7’s internal blasters certainly don’t do justice to EDM, rock, hip-hop or any other genre of music. 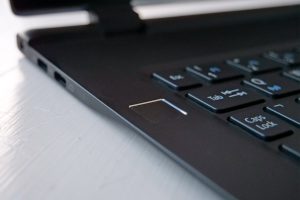 This 2018 model of Swift 7 comes with a choice of two different configurations. The model tested was the Acer Swift 7 SF714-51T, which is the more premium of the two options. Running the show is Intel’s Core i7-7Y75 chipset, backed by 8GB of DDR3 RAM.

While I found performance to be fine for everyday tasks, such as web browsing, messing around in Office suites and tweaking photos, the Swift 7 struggled with some more strenuous jobs. Gaming and video editing are also best avoided, especially given the lack of dedicated graphics. Even older titles that ordinarily run with a solid frame rate on laptops around this price either really struggled or simply refused to get going.

This lacklustre performance was reflected in the relatively low benchmark scores. With these results, Acer’s featherweight fighter falls behind rivals, such as the Dell XPS 13, and even Microsoft’s Surface Pro: 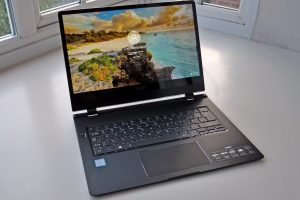 Still, when it comes to internet connectivity, the Swift 7 makes up some ground. As well as Wi-Fi, you can slip a SIM card into the laptop to stay connected wherever you wander. While you don’t get the same kind of future-proof support as Qualcomm’s Snapdragon laptops offer, you can still enjoy 4G speeds on the move.

The 256GB SSD also performs well, given the compact nature of the device. Read and write speeds were beaten in testing by the Dell XPS13 laptop once again, yet I found that file transfers were fast enough.

A 4580mAh battery has been crammed into the slender chassis, and I found that this happily lasted a full working day with mixed use. That is, if your working day doesn’t go into serious overtime.

While the Swift can’t quite match the Dell XPS 13’s fantastic 12 to 13 hours of life between charges, it can usually survive for eight to nine hours before giving up the ghost. This result was reflected in our standard battery benchmarking too, lasting just shy of nine hours with a combination of web browsing and video playback.

When charging back up, the Swift 7’s battery is normally filled within two hours, even if you’re using it at the time.

Should I buy the Acer Swift 7?

Although it really is impressively skinny, the Swift 7 isn’t quite the most portable laptop around. For a similar cost, you can grab Dell’s XPS 13, which is more compact and also boasts better battery life. Not to mention nippier performance, especially when diving into more complex tasks.

That said, there’s plenty to love here — from the gorgeous touchscreen display to the well-designed keyboard and that 4G connectivity. Unfortunately, there are better choices at this price, which makes it difficult to recommend wholeheartedly.

Although very slim and nice-looking, the Acer Swift 7 isn’t the most portable laptop around, while also underperforming compared with rivals.