If you're after a sub-£1000 laptop that’s big on portability without skimping on performance, the Acer Swift 5 should definitely be on your list.

Acer has once again updated its excellent ultra-slim laptop, the Acer Swift 5, as we head from 2019 into 2020.

Now with WiFi 6 support, updated specs and more power than ever before, is this still one of the best ultrabooks around? If your budget is under £1000, it’s certainly well worth considering.

Like the Swifts of yesteryear and the larger Swift 7, this updated notebook is definitely built for a life on the road. That skinny chassis is constructed from a super-light metal alloy, with the whole package weighing just under a kilo. Every time I pick up the Swift 5, I’m convinced Acer accidentally forgot to stick any components inside. As such, you won’t even notice the added weight if you shove it in a backpack and carry it all day long. 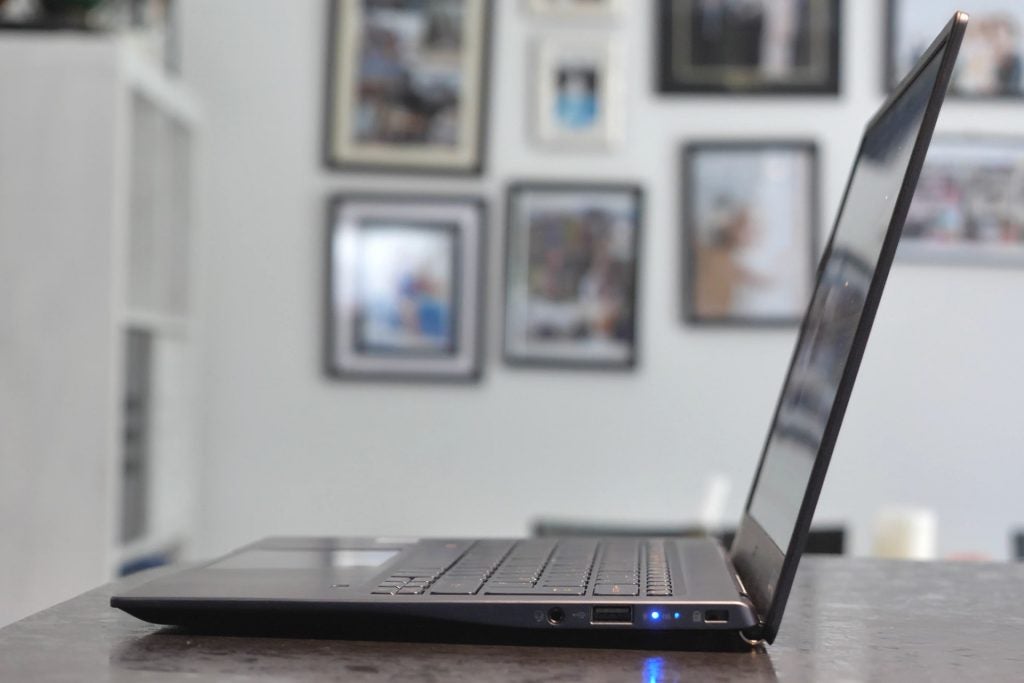 You might expect something so light to also be worryingly delicate. Thankfully that’s not the case. The new Swift is still a respectably tough little laptop, rather than some fragile, precious machine to be handled with care. No part of that metal chassis feels weak, even when poked, twisted or squeezed particularly hard.

Connectivity is surprisingly strong considering the size of this laptop. Not only do you get a USB 3.0 and 3.1 port on board, but Acer has also crammed in a proper Thunderbolt 3 port – something you don’t see around this price point too often. This can be used to hook up external displays, or you also have an HDMI connection if you need a more traditional option. There’s no Ethernet option, but to be honest, expecting that on top of everything else would be getting quite greedy. 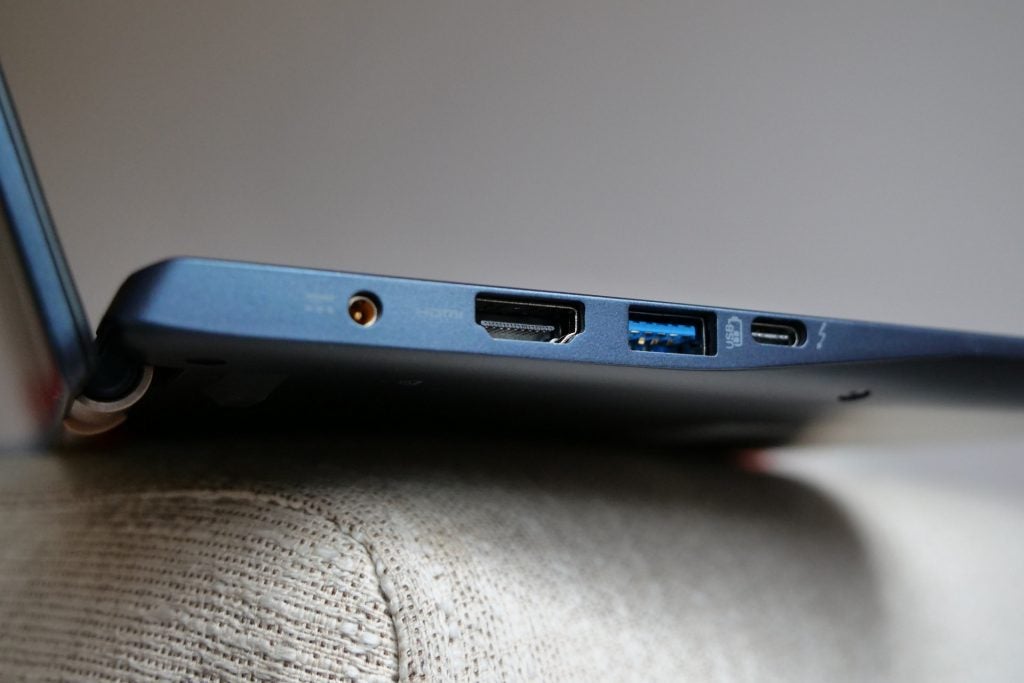 Acer has once again added a fingerprint sensor for a spot of Windows Hello security support. This sliver of a scanner is housed on the right side beneath the keyboard. Despite its dinky size, I found it worked a charm. I rarely had to tap my finger more than once to unlock the Swift 5, and it proved a welcome alternative to PINs and passwords.

Rounding off the design features is a 1MP webcam, hidden away in the tiny top bezel. This captures a rather grainy image when you’re Skyping with the fam, as you’d probably expect, while it’s certainly not a fan of dimly lit conditions. Still, it’s just about better than nothing.

I’m definitely a fan of the Swift’s 14-inch IPS display, which almost completely fills the inner lid. Sadly this panel no longer tilts all the way back to a 180-degree angle, although I didn’t have any issues finding a comfortable-enough working position, whether lounging on the sofa or crammed onto a commuter train. 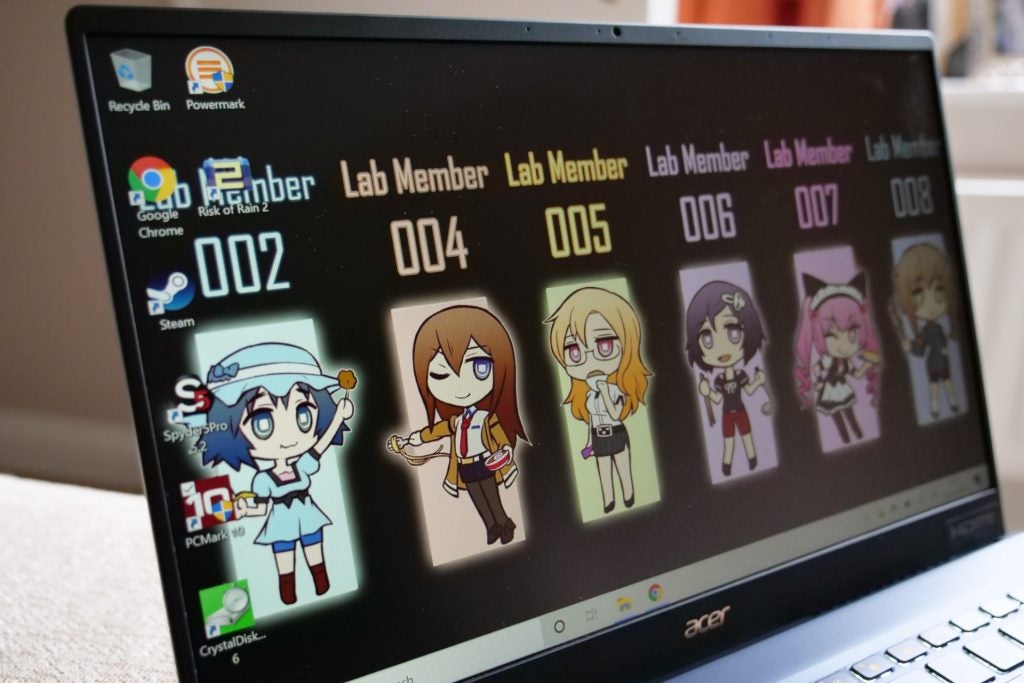 Plus, the stiff-but-not-too-stiff hinges help to keep Acer’s screen stable when you’re poking and prodding it. And prod it you shall, as you get full touch responsiveness just like the older version. Multi-touch gestures are supported, although these seem to work selectively – for instance, a pinch of the screen while beavering away in Docs in the Chrome browser won’t zoom in, while performing the same gesture on the Swift 5’s touchpad works a charm. Yet, the same pinch action on other websites often works just fine.

The quality of the visuals hasn’t really changed for this fresh model. Pics and videos look perfectly crisp thanks to the Full HD resolution. You’ll have to practically face-plant the display to notice any pixelation, and frankly I wouldn’t recommend doing that.

My display tests revealed a maximum brightness peaking at just under 300 nits, which is fine for most situations. You’ll only really struggle if you’re trying to watch a moody Marvel TV show on the beach. As a UK resident in November, I had absolutely no problem seeing what I was doing while travelling around, helped along by the almost complete lack of daylight at any given moment.

Colour reproduction is also a winner, with 100% of the sRGB gamut faithfully represented, alongside 78% of the Adobe RGB gamut. Vivid images have a bit of a kick, but on the whole you can expect natural looking visuals. Good news for photo editors. 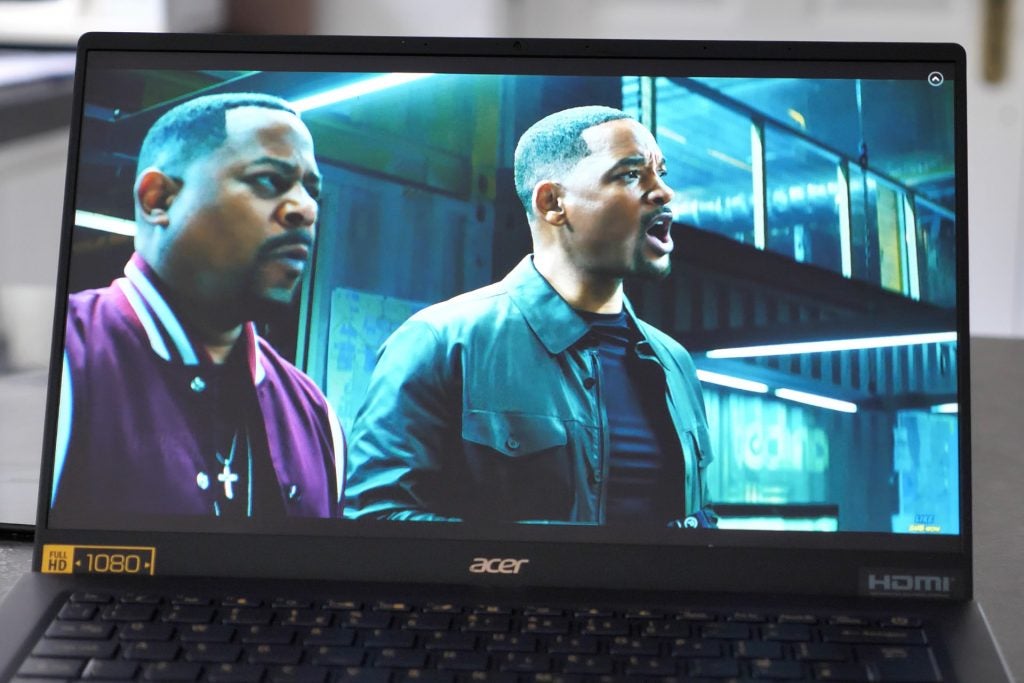 A pair of stereo speakers have been slapped underneath the laptop, at the far left and right edges. The fact that they’re aimed down at your desk – or your pants if you’re rocking the Swift 5 on your lap – means the sound inevitably comes out a bit muffled. On top volume you’ll also struggle to hear what’s going on in a noisy environment. Still, for just watching a slice of YouTube or Netflix on your tea break, they definitely do the job.

A well-sized chiclet keyboard adorns the Swift 5’s chassis, providing a pleasingly comfortable typing experience. At first I found some of my keystrokes weren’t registering, so I had to firm up my taps. Once I’d adjusted, however, I had no problems with typing at speed with accurate results.

Previous issues with the space bar appear to have been rectified, so you can now hit it at the far edges and still get a result. So the only complaint I have is the fact that Pg Dn and Pg Up buttons have been crammed in alongside the tiny arrow keys, making them difficult to strike without paying close attention.

The backlighting is back in action too, and can be quickly toggled between off, low and high intensity with the F8 key. Handy when you’re smashing out that last-minute essay at 3am. 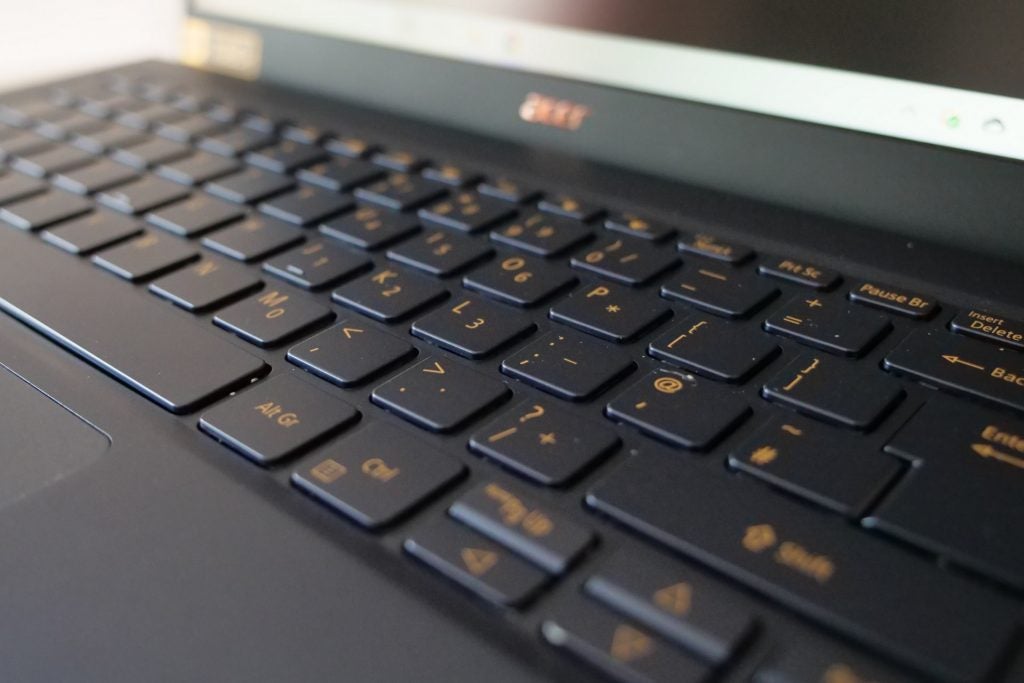 Performance is provided by an Intel Core i5-1035G1 chipset, one of the still-fresh 10th Generation mid-range platforms. Backed by 8GB of RAM, this allows the Swift 5 to breeze through everyday tasks and even gives it some much-needed grunt for more demanding apps.

In the Trusted Reviews benchmarking, the new Swift 5 spat out the following scores.

These results are a little lower than competing laptops such as the Dell XPS 13 2-in-1 and Surface Laptop 3 13, which saw superior PC Mark 10 scores of 4082 and 3919 respectively. Still, the Acer Swift 5 easily offers a good enough performance when tasked with basic duties such as web browsing, word processing and the like.

If the performance is really an issue for you, you can also get configurations of the Acer Swift 5 with a more powerful Intel Core i7-1065G7 processor, although that will see the price creep over £1000.

There’s also the option of Nvidia’s GeForce MX250 graphics card to give a hand with media editing and gaming, although don’t expect to blaze through the latest titles on top detail levels or edit 4K video on the go. Basic editing of FHD footage is a reasonably smooth experience however and titles like Risk of Rain 2 play with a steady frame rate on the default settings. 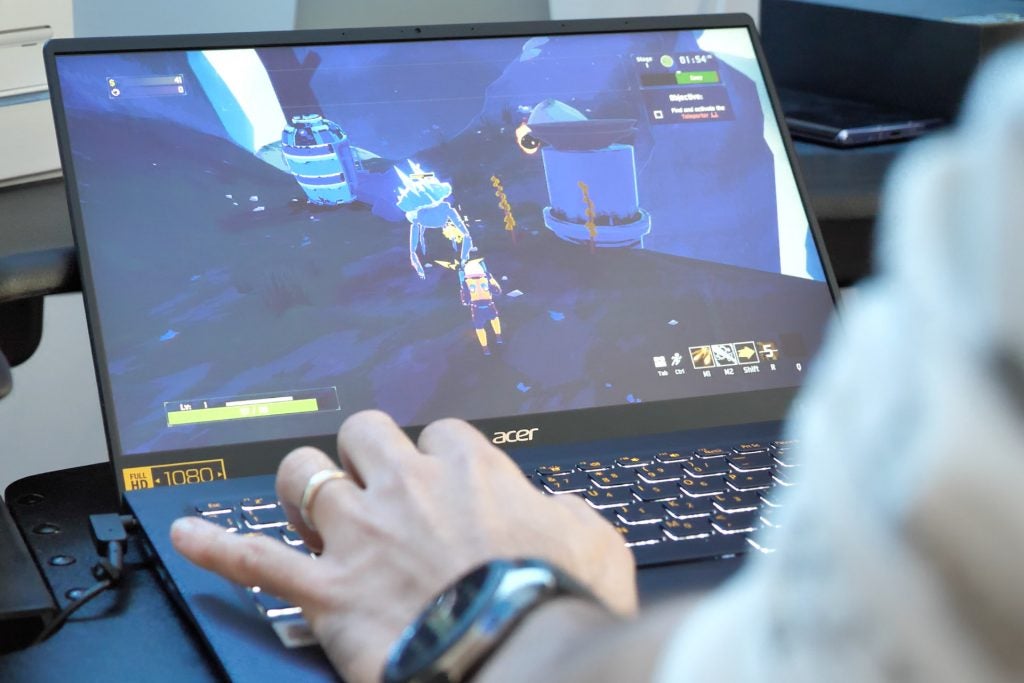 Acer has also packed full WiFi 6 support into this latest version of the Swift 5, which is still pretty rare at the sub-£1000 price point. That’ll help to future-proof this machine when the tech becomes more widespread, and is definitely great news for anyone who needs to jump online when they’re on the move. Especially if there’s a cheeky bit of Netflix streaming or even gaming involved.

You get a single SSD configuration for your storage, with 256GB of space for your apps and other bits. This proved pleasingly nippy in the benchmarking tests, churning out read speeds of 1639Mbps and write speeds of 895Mbps, which means files stored on the system shouldn’t take too long to open.

As for battery life, the new Swift 5 certainly doesn’t disappoint despite that power boost. Acer’s updated notebook survived for just under ten hours in the Powermark test, which isn’t too far off the quoted 12 hours.

This does drop a bit if you spend all day working in the Chrome browser, with around eight hours of use on a full charge. That’s still enough to get through a standard working day – not bad at all considering the slender chassis. 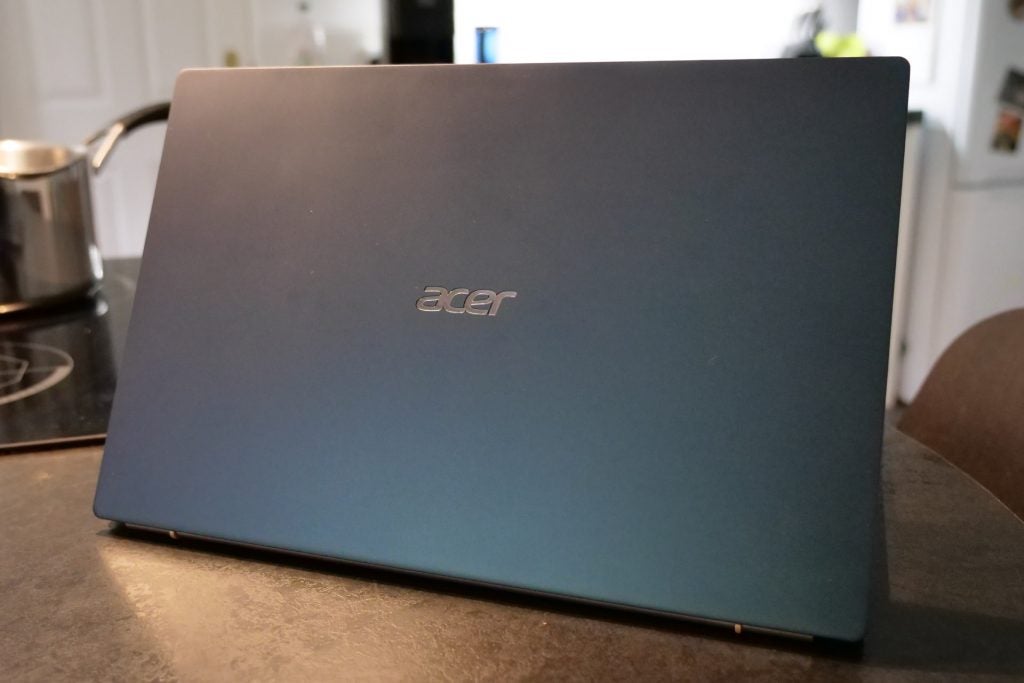 Should you buy the Acer Swift 5?

The Acer Swift 5 is a leading candidate for one of the best ultrabooks we’ve seen. It’s an absolute marvel this laptop weighs less than a kilogram despite packing Intel’s 10th Generation Ice Lake processor and rocking a solid build.

The entry model Acer Swift 5 may be less powerful than competitors such as the Dell XPS 2-in-1 and Surface Laptop 3, but it’s also cheaper by a few hundred quid. Plus, if performance really is an issue, you can spend a little bit more money for a configuration with a more competitive CPU as well as a graphics card to boost the capabilities in casual gaming and media editing.

Acer has taken a solid ultraportable laptop and made it even better with this 2019 upgrade, boosting the performance, removing a couple of annoying quirks and adding in WiFi 6 future-proofing. As a result, this is a great all-round device for students, professionals and everyone else who hits the road most days of the week. Given the very respectable asking price, this all-new Swift definitely gets my blessing.