What is the Acer Swift 5?

Ultrabooks often come packing a price tag that’s on the wrong side of £1000. Those slender shells cost a premium, although they make up for it by offering a slick performance and a lightweight finish that won’t break your back. Just one recent example is the excellent Huawei MateBook X Pro.

Thankfully, Acer’s Swift 5 is a little more affordable. You still get a solid set of specs, all crammed inside of a 970g chassis that really is impressively slim and light. Great news for anyone who’s on the road all day. 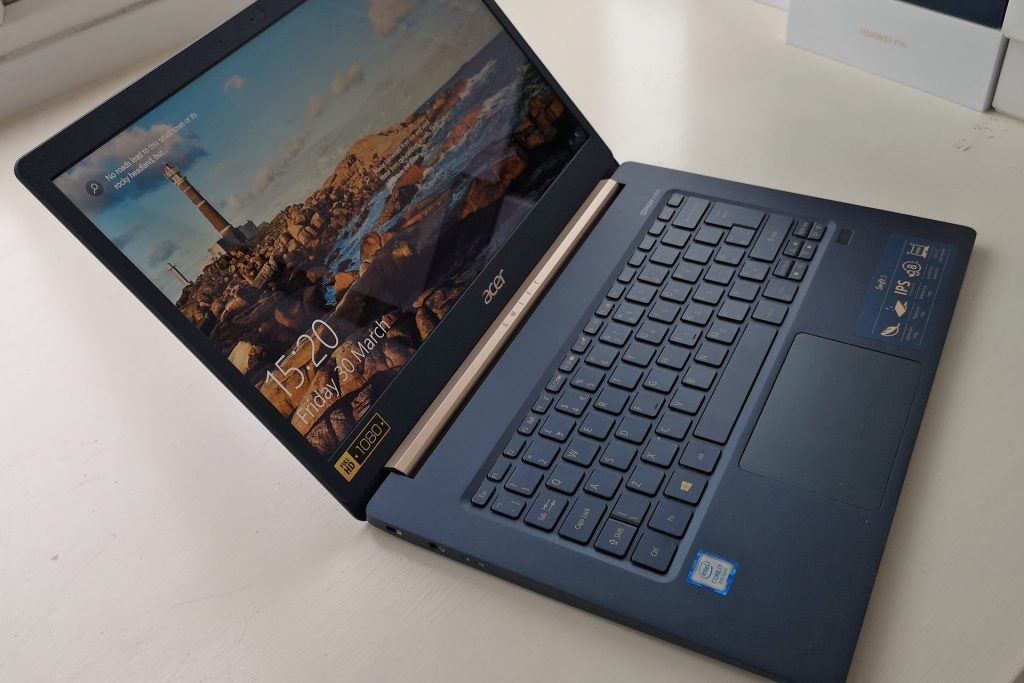 While certain laptops such as the Asus ZenBook UX410 sell themselves as thin, featherweight machines, the Swift 5 puts many of them to shame. That magnesium alloy chassis is impressively slender, remaining under 15mm at its thickest point. However, the highlight is definitely that sub-1kg weight. Frankly, it feels like Acer has forgotten to put those computery bits inside the frame; it feels like you’re clutching an empty shell.

As a result, this laptop is definitely worth considering if you’re after a portable pal. Frankly, if you were to keep this device sat on a desk at home all day, it would be a total waste. 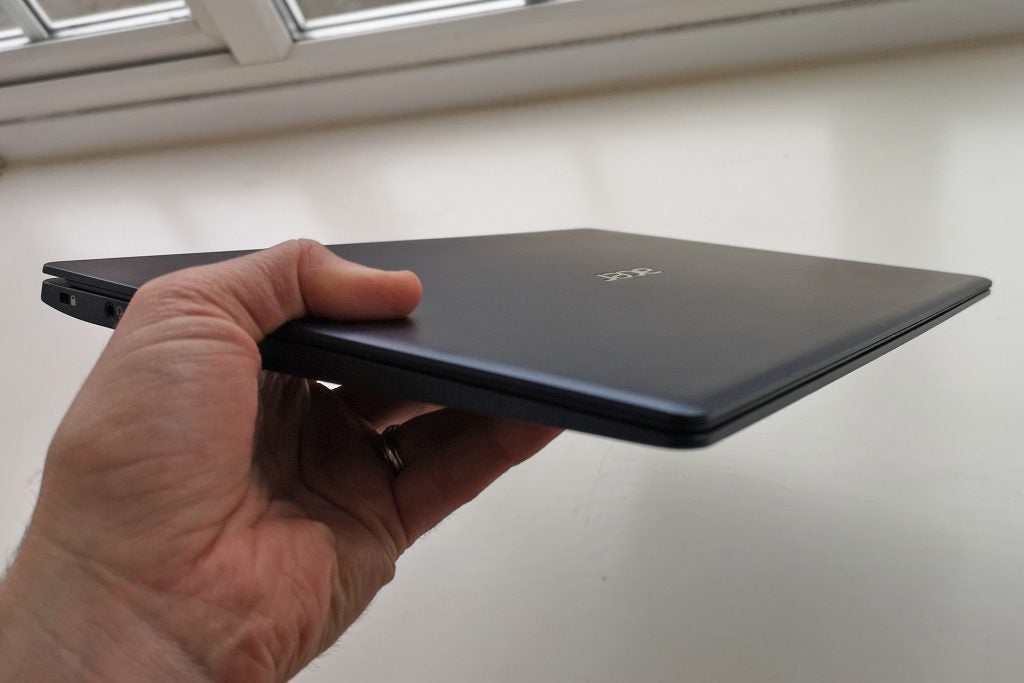 Despite its seriously slim and light finish, the Swift still feels quite solid. My plentiful pokes and prods uncovered no troublesome flex, while the skinny lid provides ample protection for the display beneath.

Connectivity, too, is strong. Two USB 3.0 ports are backed by a USB 3.1 Type-C port, boasting super-nippy transfer speeds. There’s HDMI for connecting the Swift 5 to a projector, TV or some other external display, too.

Rounding off the hardware features is a slender fingerprint sensor. This is positioned just beneath the keyboard, over on the right edge. I found it accurately recognised my digit every time I tapped to unlock the Swift 5, unless my hands were wet or dirty. The unlocking action is swift, so you won’t be hanging around waiting for the laptop to kick into life. 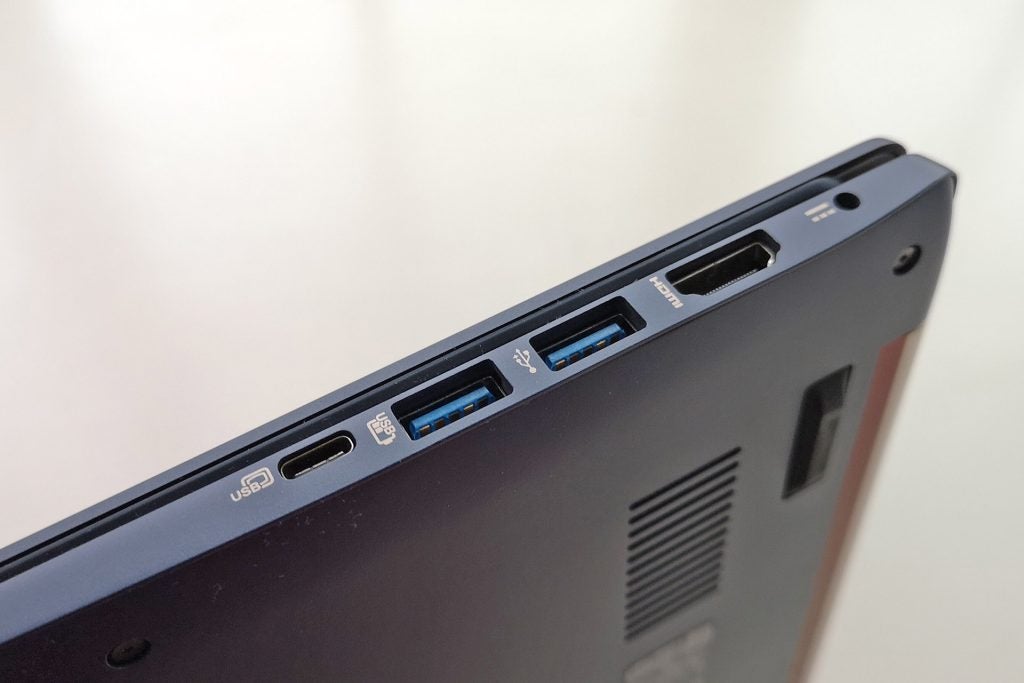 This may be a dinky 14-inch laptop, yet Acer’s keyboard is still well-sized and laid out.

As is now the norm, the Swift 5 sports a chiclet board with isolated keys. These keys are perfectly spaced, so touch-typists can immediately begin to smash out essays and emails at a satisfying speed, with minimal mistakes. Travel isn’t particularly deep, but the feedback levels are good. There’s impressively little flex too, so you don’t get any spongy action towards the centre of the board.

My one proper bugbear with this keyboard is a slightly unresponsive space key. If you tap this towards the left and right edges, your hit occasionally fails to register. After a period of adjustment I managed to strike the bar closer to the centre each time, but it’s still an unexpected irritant. 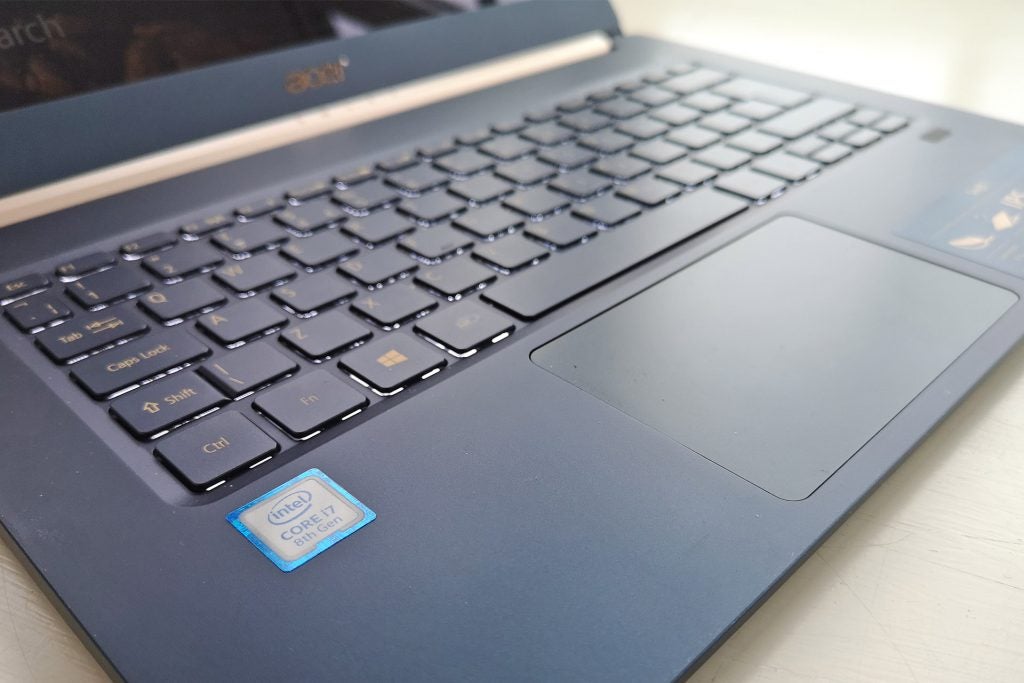 Also, the cursor keys are rather crushed up in the bottom-right corner. And with Page Up and Page Down keys sandwiched in there too, at times I found myself striking the wrong buttons and accidentally skipping all over my document. If you’re graced with an ill temper like myself, you might want to avoid working in your local cafe – or bite your tongue to prevent an outburst of expletives.

Still, those complaints aside, this keyboard is definitely a satisfying unit on which to work on that werewolf romance novel on your commute. It’s backlit too, although you only appear to get two settings: off and on.

The Swift 5 also sports a decent enough touchpad, which stretches almost the full width of the palm rest. There are integrated mouse buttons, although I preferred tapping the sensitive surface instead. Multi-touch gestures are supported. 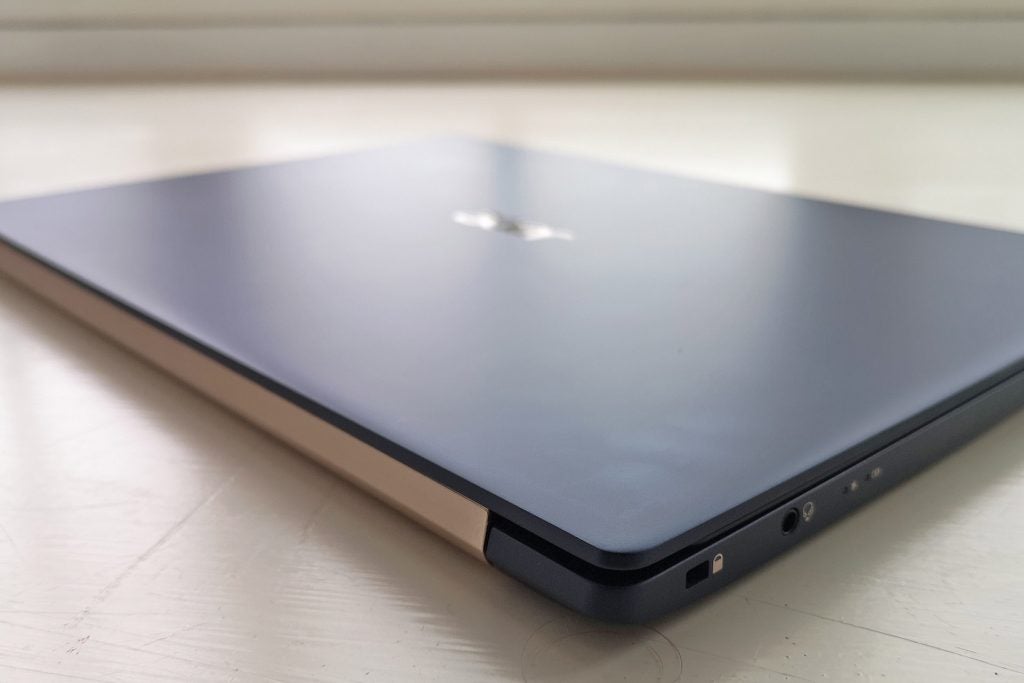 That 14-inch IPS display bends almost all of the way back to a 180-degree angle, offering a perfect view no matter the position you find yourself stuck in. Factor in the respectable viewing angles and strong maximum brightness and visibility certainly isn’t an issue.

While it feels slightly weird to compliment a company on its hinge design, Acer has triumphed once more. The Swift 5’s hinge (bearing the laptop logo) keeps the screen locked tight in place, without feeling stiff. 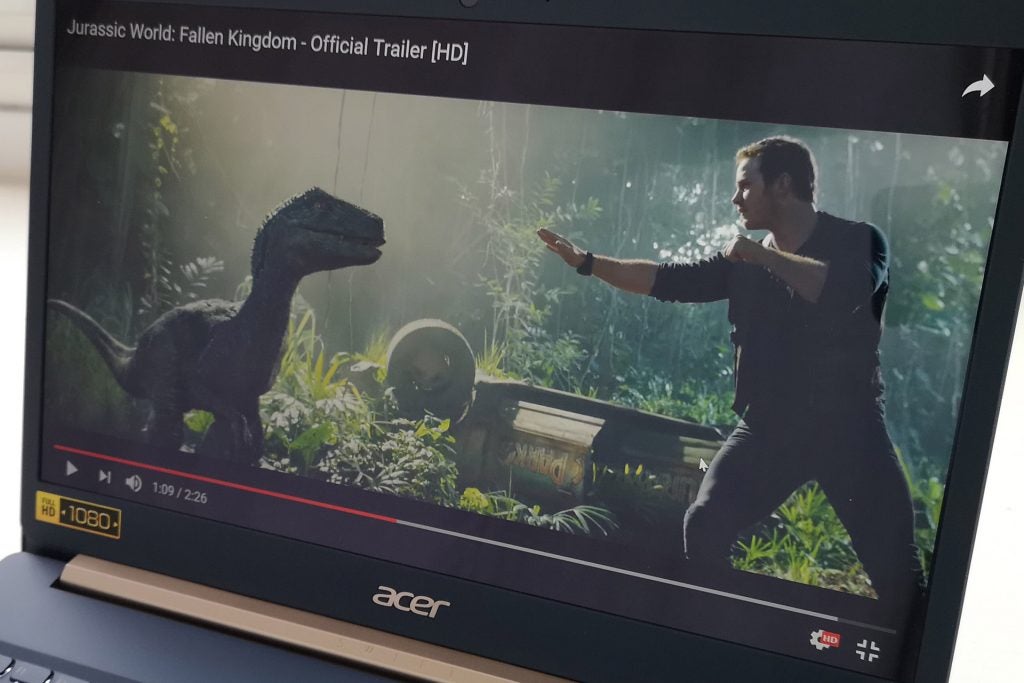 Visuals are perfectly crisp, thanks to the Full HD resolution. Editing photos was a breeze and images remained sharp when I relaxed with a movie too.

Colour realism is commendable, given the mid-range specs. In our display tests, we found that the Swift 5 covered 99% of the sRGB range and 79% of the Adobe RGB range. Good news for any budding photographers who can’t quite afford a top-end machine.

On the underside of the Swift 5 you’ll find a pair of stereo speakers, housed towards the left and right edges. These aren’t bad for laptop speakers, although the fact that they point down at your desk or pants means your audio is rather muffled. 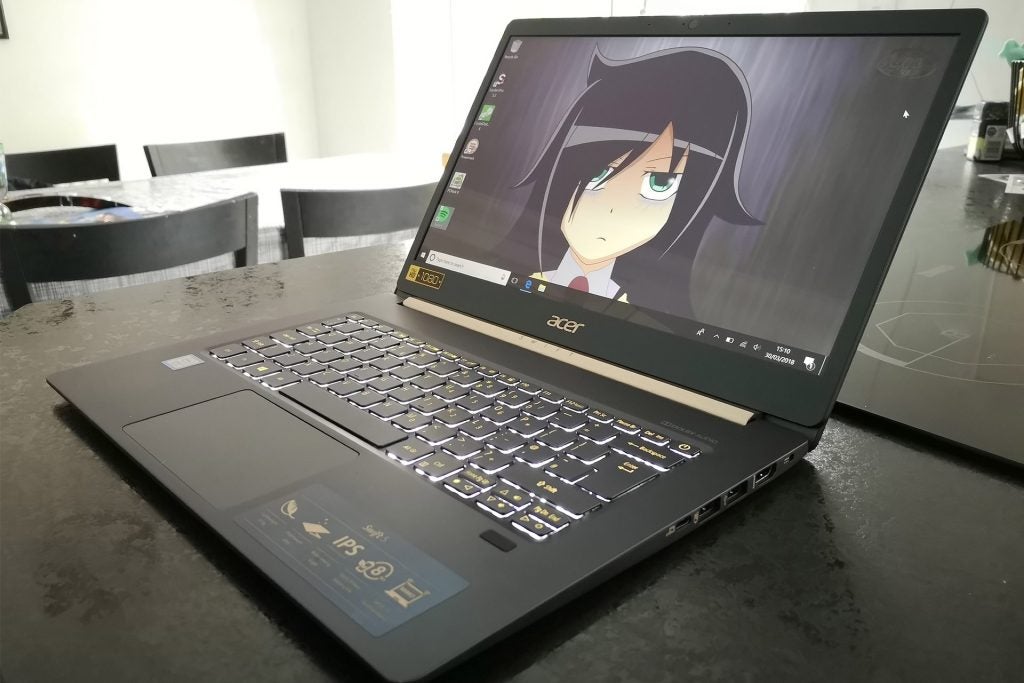 This setup is still fine for simply watching a quick episode of something while you toil in the kitchen. However, if you want to kick back with some tunes while you work, I’d certainly recommend hooking up some proper headphones or an external speaker.

Stuffed inside the Swift 5 is a 1.6GHz Intel Core i5-8250U processor, backed by 8GB of DDR3 SDRAM. I recently reviewed Acer’s Spin 5 laptop, which packed in pretty much identical specs. Therefore, it’s no surprise to see similar performance from this machine.

Everyday applications such as office suites, media streamers and web browsers run smoothly, even when you have them all on the go simultaneously. Aside from the occasional Windows-related shenanigans, I never had any issues for the full testing time. Plus, the Swift stays cool and quiet throughout. 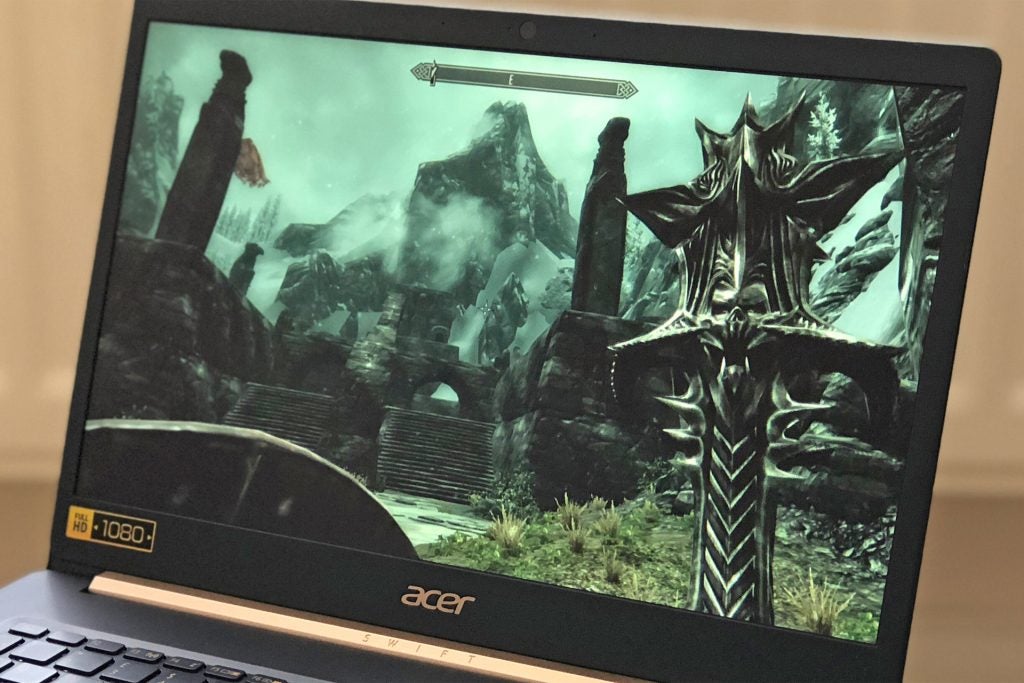 I also saw almost the same results as the Spin 5 in our benchmarking tests. PCMark 8 returned a score of 3084, which beats many other mid-range machines from other manufacturers. For instance, the Asus ZenBook UX430UA managed 2767, while the Lenovo IdeaPad 720S churned out 2426.

Unfortunately Intel’s integrated UHD Graphics 620 GPU is utilised for rendering visuals, rather than a proper dedicated solution. I found that I could still edit photos and mess around with older games (or quite basic titles such as point and click adventures), without any chugging or crashes. However, anyone hoping to enjoy more recent titles will be met with a stuttery slideshow–style experience. You’ll want to find a laptop with dedicated graphics instead.

The 256GB Solid State Drive offers read speeds of 560.4MB/s, which is about standard for laptops at this price point. However, the 257.6MB/s write speeds are a little more disappointing.

Although the Swift’s slender frame doesn’t offer much space for a battery to reside, you’ll get a respectable return from each charge.

With mixed use (mostly browser-based work while streaming music and the occasional bit of editing), I usually managed at least five to six hours of productivity before the battery warnings flashed up. And in the standard Trusted Reviews test, which involves a mixture of video playback and web browsing, the Swift 5 lasted just over seven hours in total. 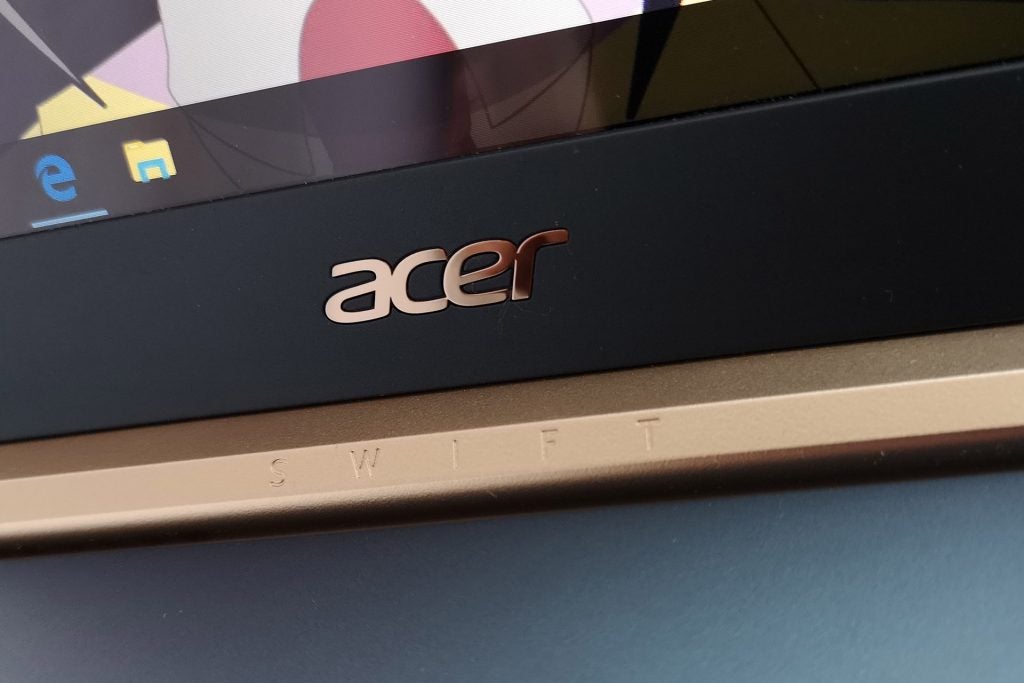 Should I buy the Acer Swift 5?

Portability is without a doubt the highlight of Acer’s latest Swift. The slim and light finish makes this a perfect laptop for carrying around all day, while the rest of the machine makes few compromises.

A couple of keyboard issues aside, I have few complaints with the everyday usability. The Swift 5 offers smooth performance and stays cool and quiet, although anyone after a gaming device should look elsewhere.

If you’re after a highly portable laptop which doesn’t skimp on performance, the Swift 5 is a solid choice which won’t completely break the bank.