The Acer Swift 3 2020 is one of best value ultrabooks you can buy, featuring a top class Intel performance usually only found with more expensive laptops. But a blatant budget build quality and underwhelming battery life may tempt you into the arms of Apple, Dell or Microsoft instead.

Ultrabook laptops generally cost upwards of £1000 these days, which is a heck of a lot of money if you just want to browse Instagram and YouTube. The Acer Swift 3 is an affordable alternative to the pricey laptops from Apple, Dell and Microsoft, and isn’t far behind them in terms of quality.

Design – The Acer Swift 3 is bland but practical

The Acer Swift 3 is a pretty dainty 14-inch laptop, with very few competitors proving slimmer than the 15.95 mm height. And while the Dell XPS 13 (2020) is more slender by a couple of millimetres, it lacks the generous connectivity that Acer provides here.

Acer has managed to fit on 1x USB-C (Thunderbolt 3 supported), 2x USB-A, 1x HDMI and a headphone jack. In fact, Acer the Swift 3 has clearly been designed to accommodate these ports, instead of leaving them as an afterthought. The only omission is an SD card reader, but I don’t think that will be an issue for the majority. 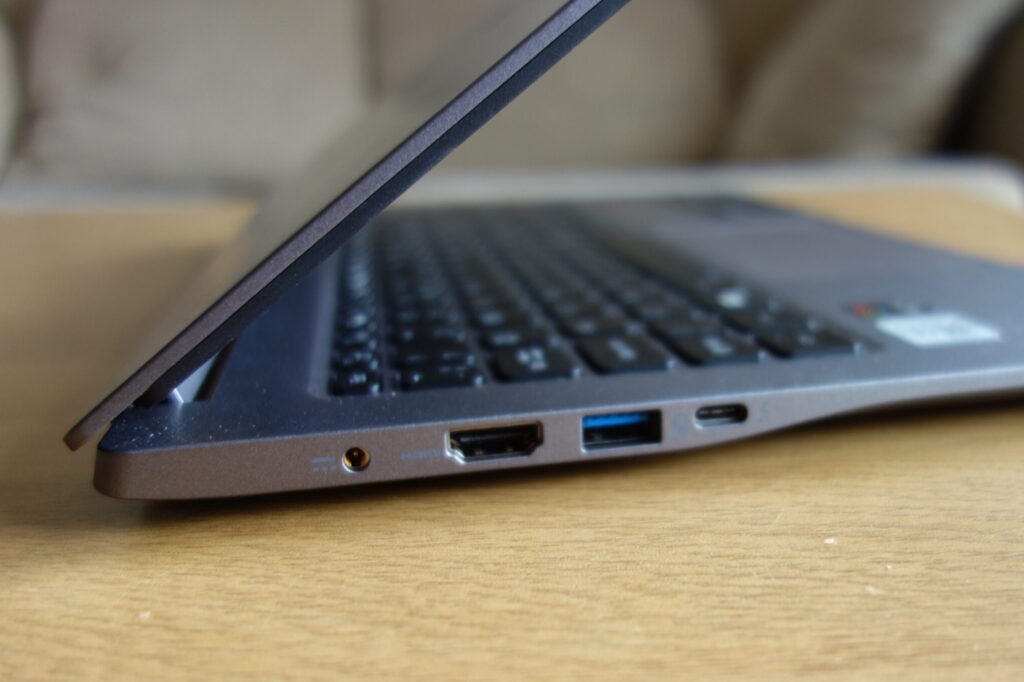 The Swift 3 features a narrow bezel to allow for as much screen space as possible. This isn’t quite the edge-to-edge display that more premium laptops are bragging, but it still looks bang-up-to-date in 2020.

Otherwise, this laptop looks rather bland. Remove all the labels and the Acer logo, and it would be difficult to pick the Swift 3 out from all the other grey laptops on the shelves of PC World. You can get a blue model however, which I personally think looks significantly better. 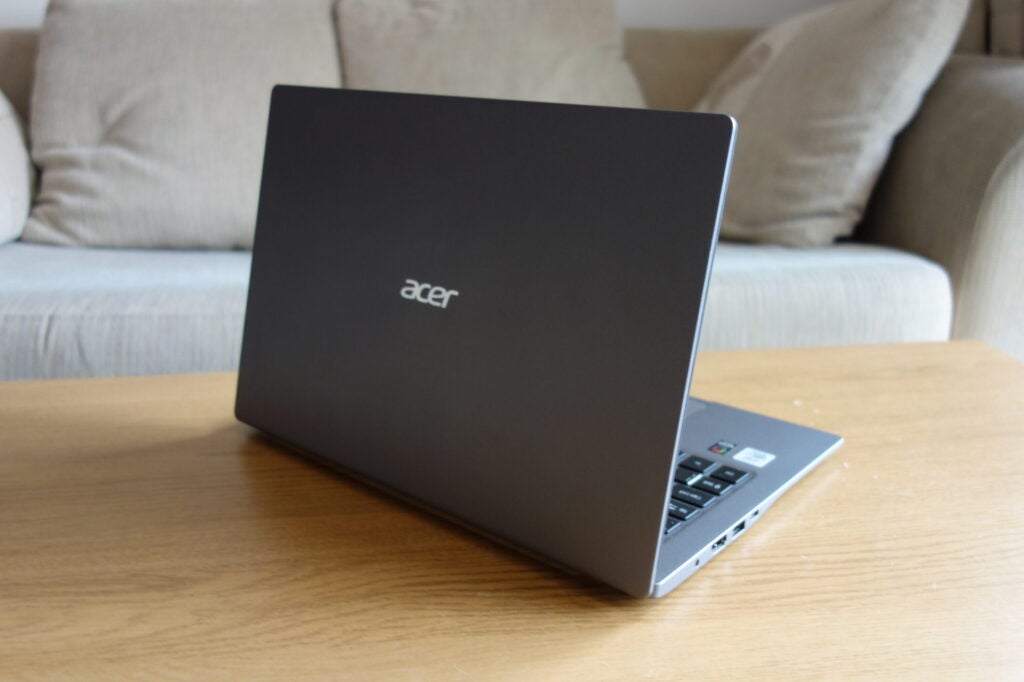 It feels a little bit cheap too. If I knocked it off a desk I’d be confident the Swift would survive the drop, but the magnesium-aluminium metal chassis doesn’t feel as classy as the clamshell designs of Apple, Dell and co.

The speakers are a disappointment, firing down into the desk for a muffled audio quality. I didn’t mind having it blasting out Spotify tunes, but you’ll get a lot more joy with headphones.

The Acer Swift 3 has a glaringly bright keyboard backlight that looks almost tacky. On the flip side, it’s a very useful feature when writing essays in the dark.

Keys offer great travel and subtle clicky feedback, resulting in comfortable typing. Keys have noticeably large spacing though, causing the odd clumsy typo, but I’m sure you’ll get used to the layout after a couple of weeks. 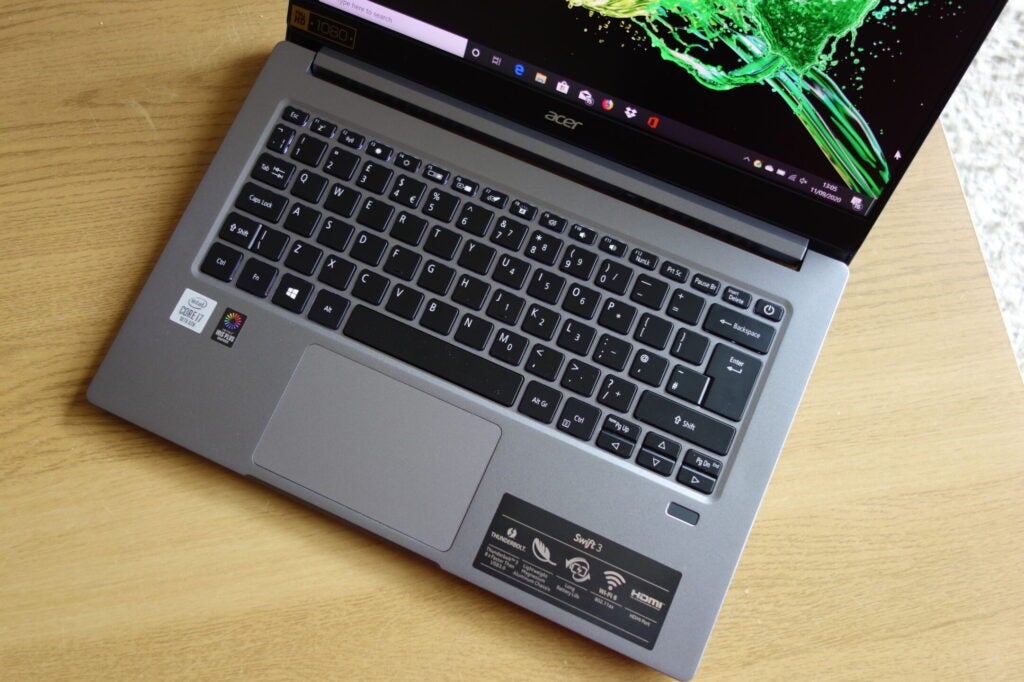 There’s no number pad here, but Acer has still been forced to squash down the arrow keys which is extremely frustrating for anyone who uses them frequently. A dedicated fingerprint sensor can be found on the bottom-right side of the laptop chassis. It works reasonably well, but I did notice a slight delay when unlocking the laptop.

The trackpad is as big and responsive as you could hope for, but isn’t aligned perfectly in the centre. I doubt this will be problematic for many people, but it still may well be annoying for some.

The Acer Swift 3 features a 14-inch 1080p LED display, which is slightly larger than most screens found on an ultrabook this light and skinny.

The picture quality is pretty good, especially when you consider the price. An above-average maximum brightness level allows you to use the laptop outdoors in harsh sunlight, while the decent black level means you shouldn’t be squinting in shadowy scenes. These figures result in a great 1207:1 contrast ratio, ensuring the Swift 3 is a superb pick for Netflix marathons. 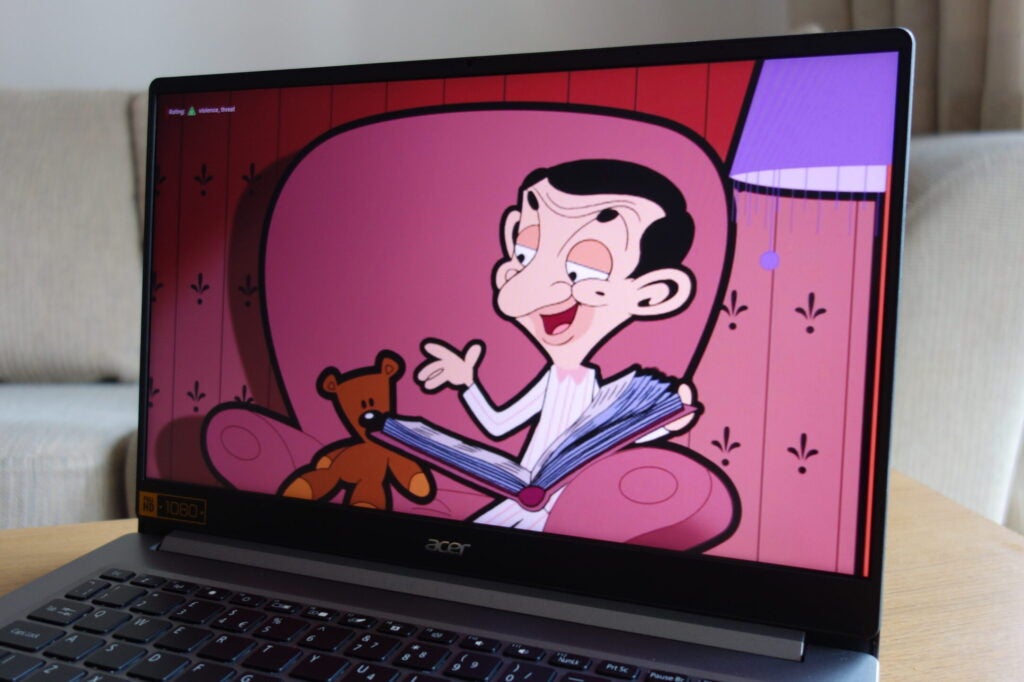 My only major issue with the display is the cool colour temperature, which means white colours will sometimes appear to have a blue tint. I didn’t find it an issue when watching Netflix, but it could become irksome for picture perfectionists.

Performance – The Acer Swift 3 2020 excels at the basics

The Acer Swift 3 packs some surprisingly powerful component options, up to a 10th Generation Intel Core i7 processor and 8GB RAM. Acer gave me the most powerful configuration to review, and I was very impressed with the performance.

As the below benchmark data will tell you, the performance isn’t far off the significantly more expensive Dell XPS 13, and blew away the budget-friendly Honor MagicBook 14.

In practice, this means the Acer Swift 3 can blast through productivity tasks without breaking a sweat. What’s more, the powerful integrated graphics allow you to engage in entry-level content creation gaming. We’re talking the likes of Apex Legends and Fortnite with dialled back graphics settings, but this is still impressive considering the low price.

The SSD speeds aren’t quite as impressive, seeing read and write speeds of 1736 MB/s and 1455 MB/s respectively. This means the Swift 3 is slower than rival laptops at saving and loading data from the drive, although that won’t be an issue if using cloud services such as Google Drive and OneDrive.

Acer offers a generous range of storage capacity options at affordable prices, with the 1TB model only costing £899.99. If you want to keep costs to a minimum, you can buy a 256GB version for just £599.99 instead which is ridiculously good value.

The Acer Swift 3 packs a lot of power, but that, unfortunately, means it’s left wanting in the battery department.

It only lasted shy of seven hours in our battery benchmark test, which involves turning the brightness down to 150 nits and simulating day-to-day office productivity tasks via PCMark 10. 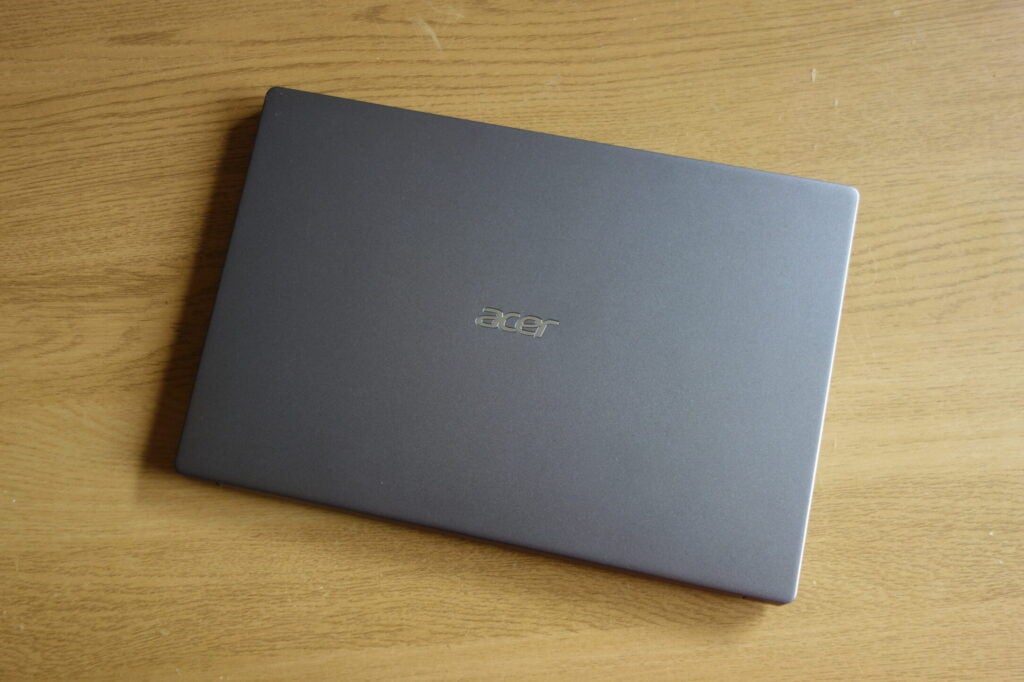 Such a figure isn’t atypical for a modern day ultrabook, but the likes of the Galaxy Book Ion boasts 2x longer battery life and the more affordable Honor MagicBook 14 can last close to nine hours. This proves there are many superior alternatives if long battery life is a priority.

The Acer Swift 3 is a great ultrabook at an affordable price. It offers similar performance to more premium notebooks – such as the Dell XPS 13 and Surface Laptop 3 – despite costing a few hundred quid less.

It’s not quite the bargain as the Honor MagicBook 14, especially since the Swift features a shorter battery life and slower SSD speeds, but Acer makes up for that by offering a large range of processor and storage options for added flexibility.

If you need an ultra-portable laptop with oodles of storage and a performance competent enough to dabble with content creation, then the Acer Swift 3 2020 is one of the best value options you can currently buy.