What is the Acer Swift 1?

The Acer Swift 1 is the cheapest laptop in the company’s Swift lineup. This means it lacks some of the performance and extra features of its more expensive siblings but retains the essentials: an all-metal body and a Full HD screen.

In essence, it’s the shell of a premium laptop but with the heart of an entry-level model, with a low price to match.

There are multiple versions of the Swift 1 available, with the older model with a lower-spec chassis currently the one that’s most widely sold. The model on review here is part of the newer range, called the SF113-31. It doesn’t have a UK seller, but we’re informed it’ll be priced from £340 when it does.

There are two key reasons you’ll want to get this laptop over even cheaper ones, such as Acer’s own Spin 1, and the first of these is design. With its all-metal exterior and 18mm thickness, at a glance this machine could easily pass for one costing three times as much. To find out more about how these models compare, read our Acer Spin 1 Review here. 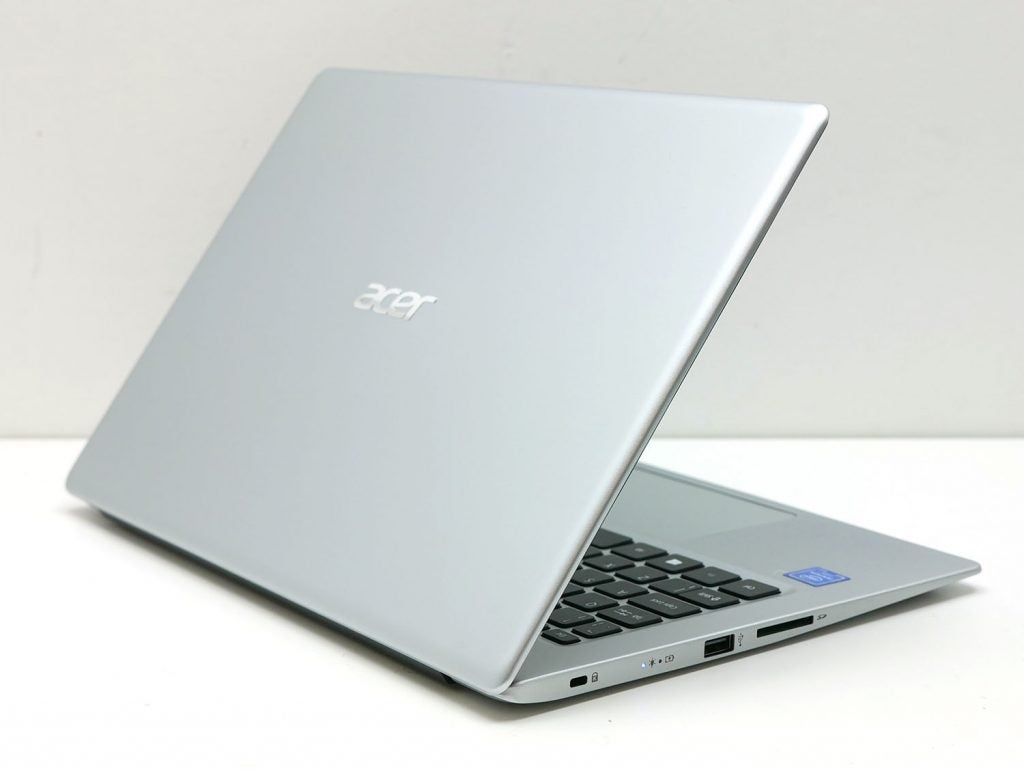 The metal isn’t entirely there for show either – there’s a reasonable degree of robustness here, even if it can’t quite match up to truly unibody designs such as Apple’s Macbooks.

In fact, I prefer the overall look and feel of the exterior of this laptop to that of the more expensive Swift 3. The lack of shiny chamfered edges gives is a slightly cleaner look and it feels better in the hand, too.

All this, and Acer has managed to make this a very light laptop as well – it weighs just 1.3kg.

You don’t miss out on much in the way of features, either. Down the sides there’s plenty of connectivity, with an HDMI, two USB 3.0 ports, a USB Type C port and a headphone jack on the right and a USB 2.0 and an SD card reader on the left. 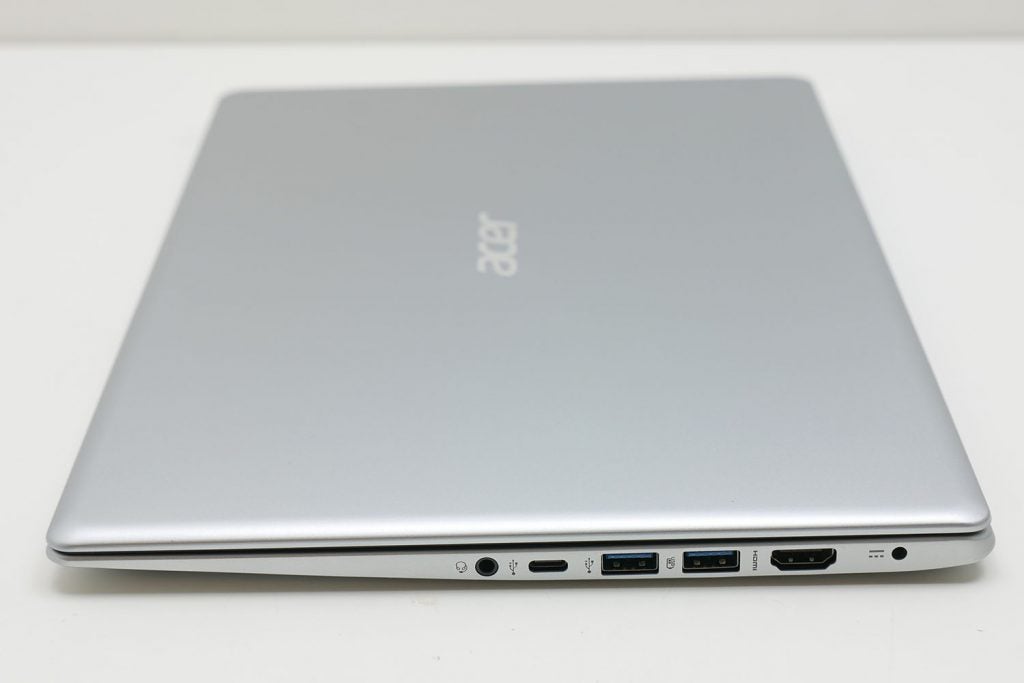 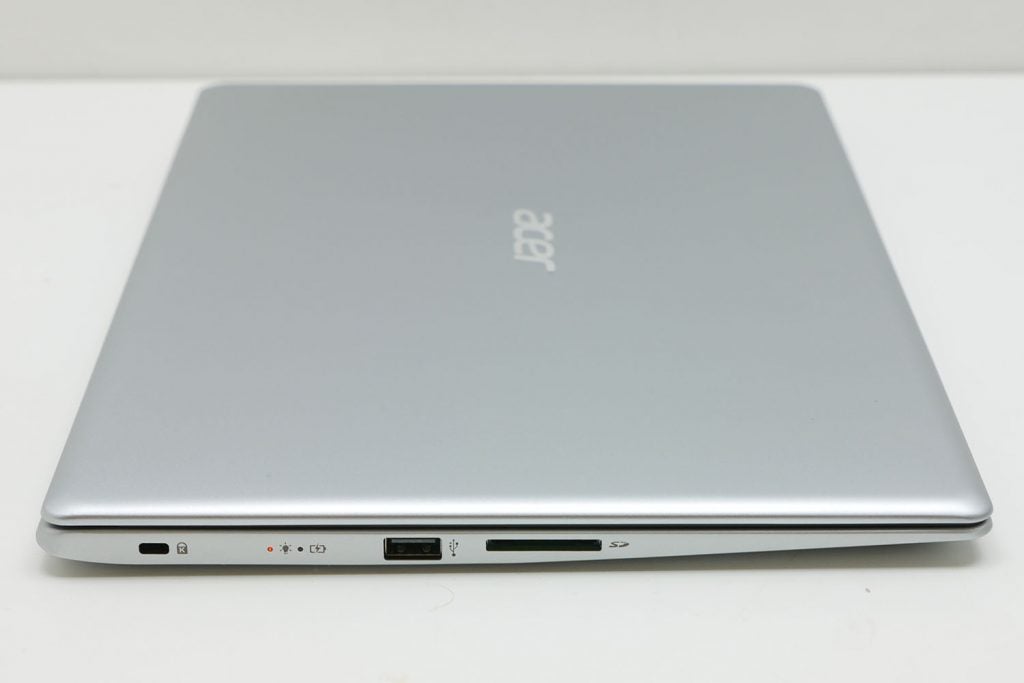 Above the screen you also get a webcam and internally you get up-to-date 2×2 802.11ac Wi-Fi and Bluetooth. For wired networking you’ll have to use a USB adapter.

The keyboard is a good piece of kit. It has a proper UK layout, with a large enter key and a pound symbol, and the keys are nicely spaced out. Perhaps the only thing missing is any form of backlighting, but find me a laptop this cheap with backlighting and I’ll slap you on the back.

The key action is also perfectly acceptable. It’s very shallow and the break in the key’s travel isn’t all that well defined, but there’s enough there that touch typists should feel reasonably at home. 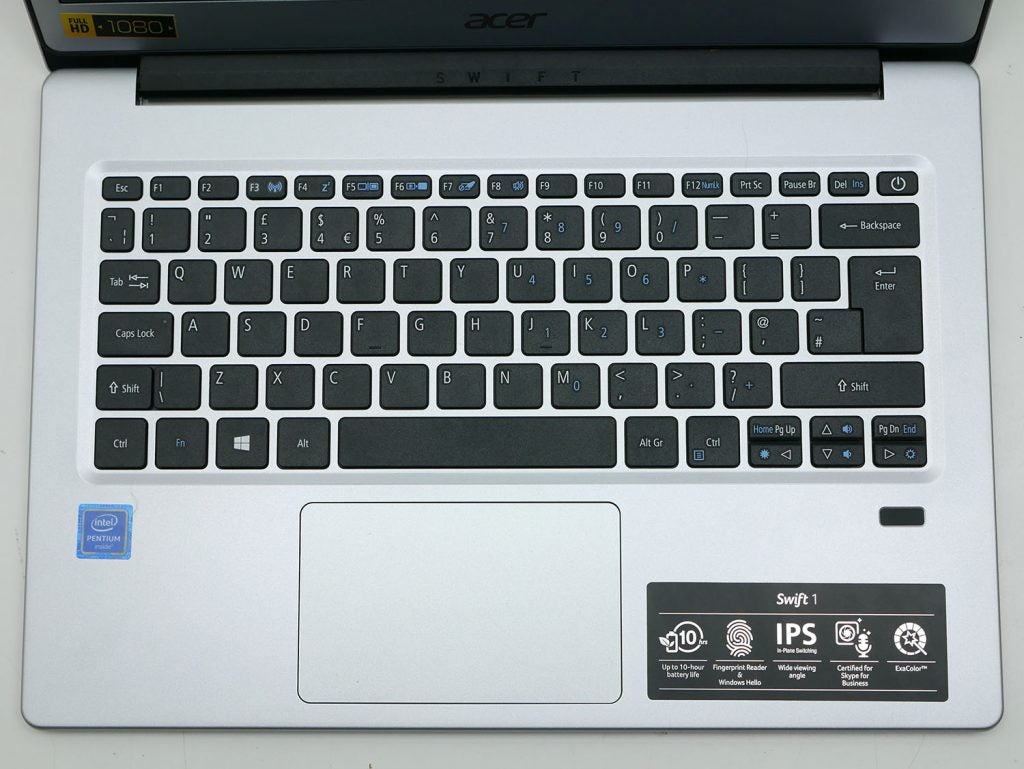 Likewise, the trackpad is comfortably up to the job. It’s large, has a nice smooth-gliding metal surface and the click action is light but defined. It’s also responsive and perfectly set up right out the box. Windows 10 tends to do a very good job of handling even poor trackpads these days – long gone are the days of truly awful ones – but here it’s still a cut above many.

The second big attractive feature of this laptop, after its design, is its screen. It uses an IPS-type LCD panel, so has great viewing angles and surprisingly good overall image quality to boot. Its colour temperature is a bit too high, at 7075K, giving the image a slightly cold/blue tinge but it’s very subtle. Meanwhile a contrast ratio of 1261:1 is excellent, showing that this display can muster up deep inky blacks while also showing bright colours, resulting in a deep, rich looking image.

The resolution of this display is good, too. On some cheaper laptops you’re forced to make do with a blocky, low-res screen but here you get a Full HD (1920 x 1080) panel, making for a nice sharp image.

There are just two problems. The first is that the maximum brightness is a bit low. At just 267nits, it may struggle a little if you’re using your laptop out in bright sunshine. The surface of the screen has a matt finish, so is non-reflective, but the sheer brightness of the sun will make this laptop’s display look relatively dark. 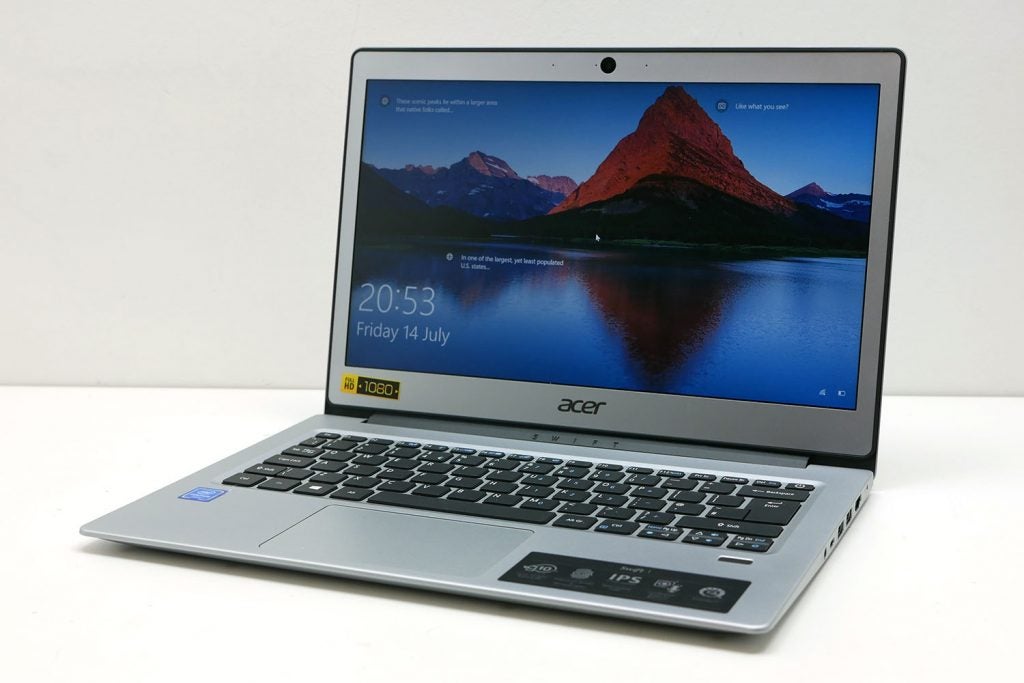 The second issue is hardly one at all considering the price of this laptop but it’s worth noting that just a 61.2% coverage of the sRGB colour space means this laptop doesn’t have the fine-colour reproduction that professional content creators will require, which is to be expected at this price. For most users it’s something of a non-issue, though.

A 720p resolution webcam sits in the bezel above the screen and it delivers perfectly acceptable image quality for basic video-calling. With a framerate of 30fps and relatively low resolution you get a somewhat choppy, grainy image but it’s enough to get by.

Similarly, you get a couple of speakers that fire down from the underside of the laptop and they do a reasonable job. There’s enough volume and clarity that you can enjoy the latest film trailers or Skype without needing a headset but inevitably the lack of bass means that you’ll want separate speakers or headphones for watching a movie or listening to music.

So far, so good for the Acer Swift 1 but there’s a fly in the ointment. While everything externally on this laptop is great or at least perfectly good enough, its performance is not quite up to scratch.

The problem is the choice of CPU. It uses an Intel Pentium N4200, which is a quad-core chip so it’s technically quite capable when it comes to multi-tasking. However, it runs at a base clock speed of just 1.1GHz, which is astonishingly slow. Luckily, it perks up to 2.5GHz in short bursts of activity so it doesn’t actually feel as slow as it might. Even something as relatively basic as watching BBC iPlayer or Netflix can cause it to chug along – it’ll run them but you won’t want to be running much else in the background.

The overall feeling of using this laptop is that it’ll get stuff done, but won’t be a machine for anyone that likes to work quickly or heavily multi-task. 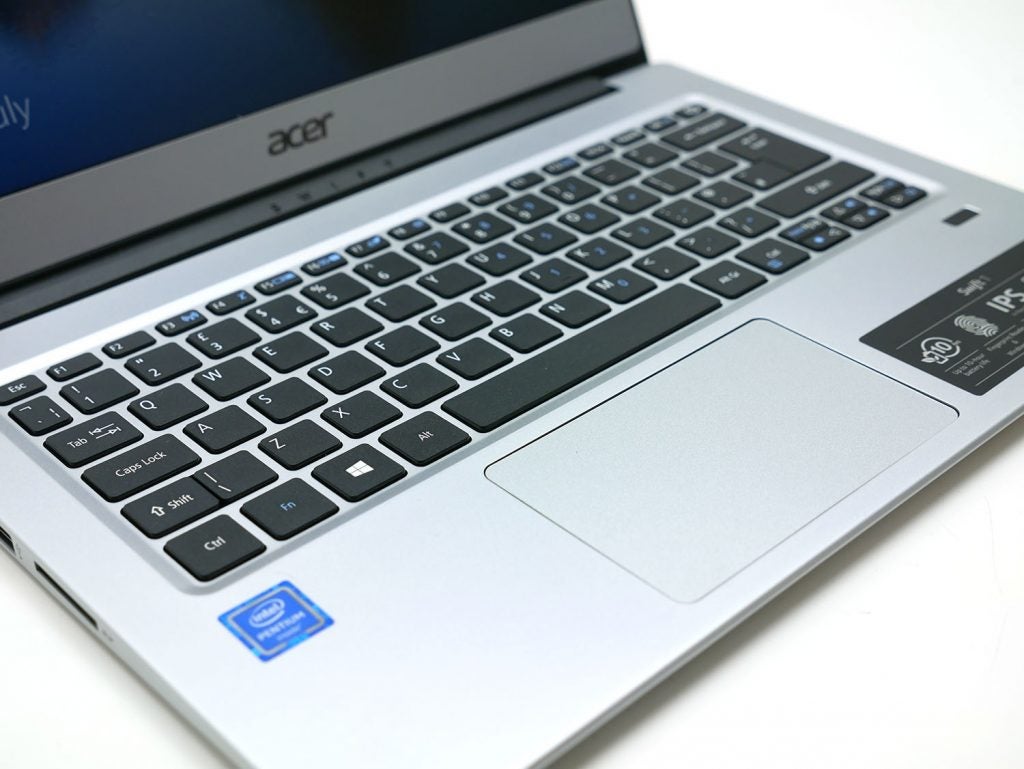 These scores are comparable to the ultra-budget Acer Spin 1 but one area where it pulls slightly ahead is in the speed of this laptop’s storage. It uses flash memory storage  but it’s fairly slow as SSDs go. With read/write figures of 394MB/s and 373MB/s it’s well behind the Swift 3 (488/439) but well ahead of the Spin 1 that could manage just 103/100, which is as slow as a hard drive.

The end result is that this laptop is a touch faster than several cheaper laptops when it comes to loading apps and moving files around – and it’ll be a fair bit faster than any laptops with a hard drive – but it feels a bit sluggish compared to more expensive models.

As for gaming, technically some basic 3D games will run but only the very most old and basic will run well enough for an enjoyable experience.

Acer claims this laptop will last ten hours on one battery charge but this didn’t tally with my testing. In our standardised PowerMark test it lasted six hours and 28 minutes – well short of its target. It’s clear Acer’s estimates are with the brightness set at or near to its minimum, which is just about unusable in most cases – Trusted tests at 150nits, which was 60% on the laptop’s brightness scale.

Watching an hour of Netflix and the battery lost 13% charge, suggesting it would last about an hour longer when just watching video.

Overall, these figures aren’t too bad, but I’ve certainly seen some laptops of this price last longer, and it’s a shame it’s so far off Acer’s estimates.

Should I buy the Acer Swift 1?

This is a great laptop for anyone that tends to take their computing at a leisurely pace, but that doesn’t want to compromise on design and screen quality. If you mainly use a laptop for typing, watching video and checking email, it’s ideal.

If you’re more of a power user that likes to have half a dozen browser tabs open at once, while flicking back and forth to your email, having Spotify running in the background and just generally being a little busier, then the sluggishness of the Swift 1 will prove a frustration. You’ll have to bite the bullet and spend a little more for a machine running a Core i3 processor and an SSD.

The Acer Swift 1 is largely a great combination of premium looks and budget performance. It’ll be too slow for more demanding users but a good option for more casual users.