An excellent monitor for gaming, movies and more, so long as you won’t be playing in a blacked-out bat cave.

The Acer Predator XB273UGS is a 27-inch 1440p IPS gaming monitor, offering high-end specs such as 165Hz refresh rate and Nvidia G-Sync at a reasonable price.

Colour reproduction is excellent, and the Predator XB273UGS exceeds Acer’s own specs in a few areas. Only Twitch gamers need pause; this monitor displays slightly more ghosting during fast motion than a 144Hz TN panel. But even then the effect is only obvious in tests designed to reveal it. In every other respect an IPS panel such as this looks better.

Is it one of best value gaming monitors you can currently buy? Considering this sells for around £200 less than its main competitors, we certainly think so.

Those familiar with Acer’s Predator line will know what to expect when they open up the Predator XB273UGS box. This monitor’s styling is more aggressive than that of the Asus ROG range, and even more eye-catching than some of its Predator family.

The Predator XB273UGS features a pair of light bars positioned below the screen, much like the LEDs of some gaming desktops. These don’t match the content on-screen, but they can shine red, blue or green. It’s possible to set them to flash or pulse too, although it’s likely that most folk will choose to have them constantly lit or turned off. 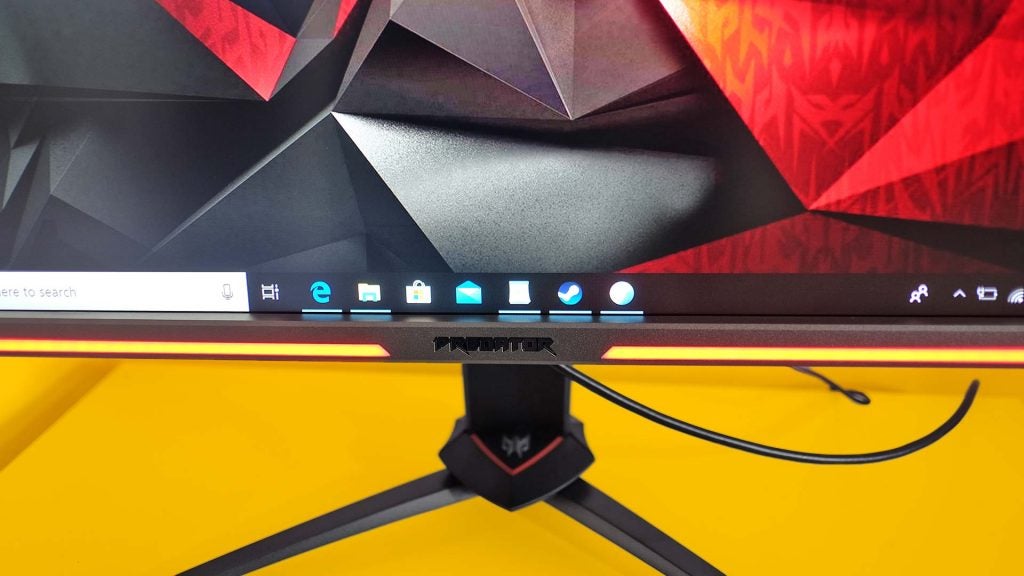 The camera turned the light bar orange. But it was red.

These LED strips are the reason that the Predator XB273UGS has a thick, perhaps unattractive, grey lip below the display. There’s a visual cost to those pretty lights.

Elsewhere, the XB273UGS looks similar to other recent Predator monitors. The spines of its base are metal, but the mainly plastic monitor arm feels sturdy. You won’t require any tools to put this monitor together, either. A pull-to-release tab clips the VESA panel on the back of the screen into the arm, and the screw that attaches the base is designed to be turned by fingers, not a screwdriver.

You can twist the Predator XB273UGS by 90 degrees should you need to display long spreadsheets or documents, plus it tilts forward five degrees, back by 20, and swivels 20 degrees to each side. 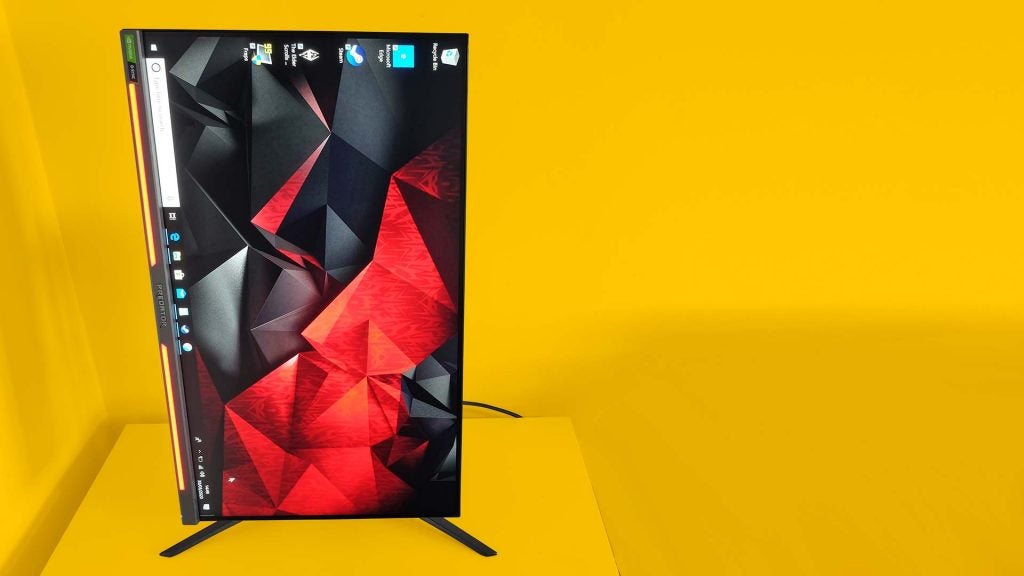 There’s 11.5cm of height adjustment too, but this is pretty much standard provision for a higher-end monitor, making it easy to get your gaming setup to a health and safety-approved level.

In terms of connections, the XB273UGS has two HDMI 2.0 inputs, a DisplayPort connector, a headphone jack and two USB 3.0 ports on the side. These are far easier to access than rear-mounted units.

The monitor also includes two 4W speakers, but I’d advise against using them; they deliver zero bass and are quiet. Then again, I doubt anyone would thank Acer for spending too much on integrated speakers. 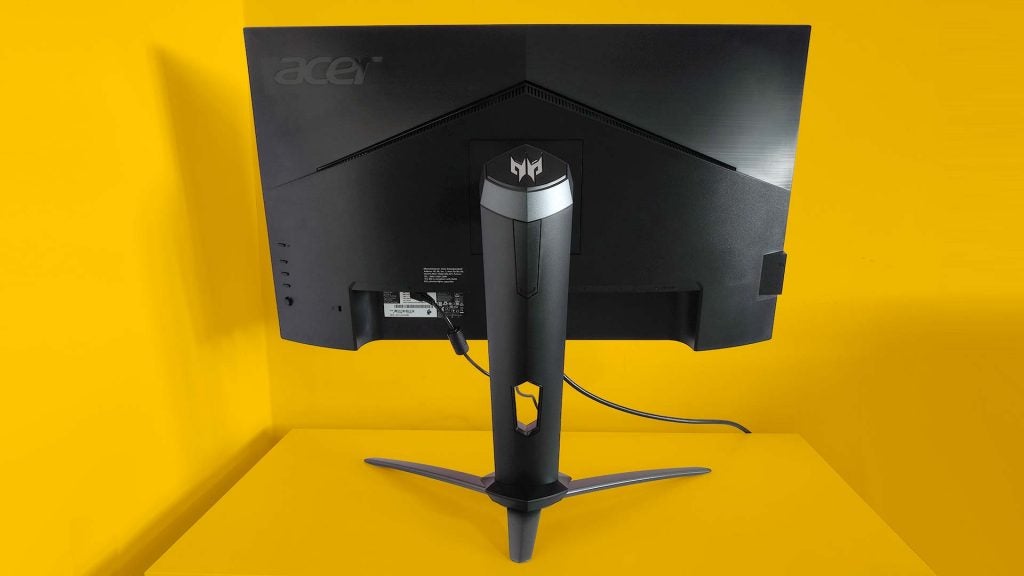 Acer keeps the Predator XB273UGS’s controls out of view. There are four buttons and a micro joystick, which you use to navigate the menu, on the rear of the monitor,

The level of customisation on offer is relatively extensive for a non-pro monitor. You have gain and bias controls for red, green and blue, which is sufficient to enable calibration of the XB273UGS with a colorimeter if you want its picture to look more accurate than it does out of the box. 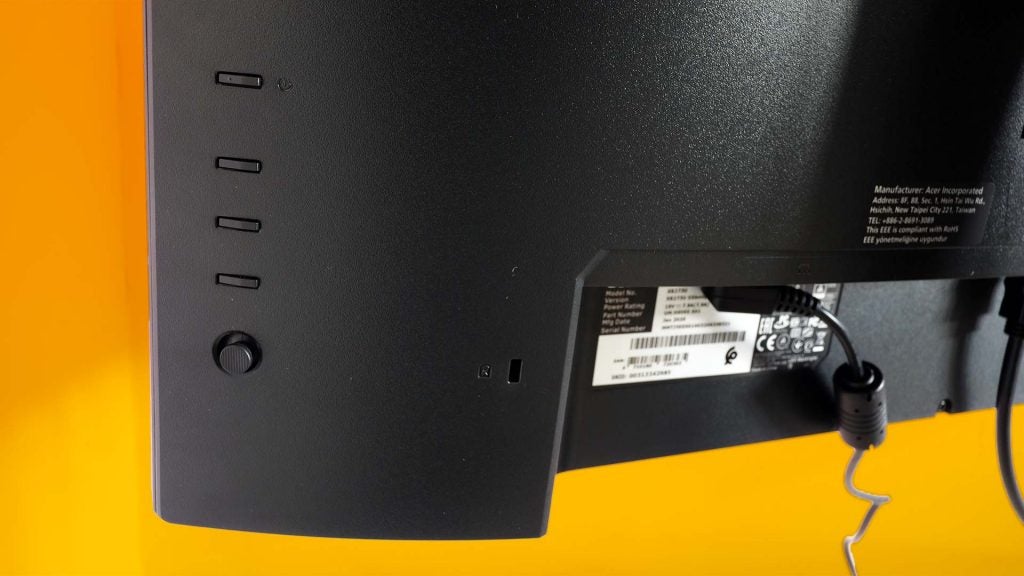 The OSD lets you toggle important game-specific features such as panel overdrive and the ultra-low latency mode. Also appreciated is the ability to make the monitor show its current refresh rate. Getting Windows 10 to make a monitor use the right rate can be tricky, and this prompt allows you to see if you’re really at 144Hz or 165Hz, not 60Hz.

Overall, Acer keeps things simple. While there’s a fairly in-depth menu system, the top layer allows you to alter just the backlight intensity and the current input without plunging too far down the rabbit hole. 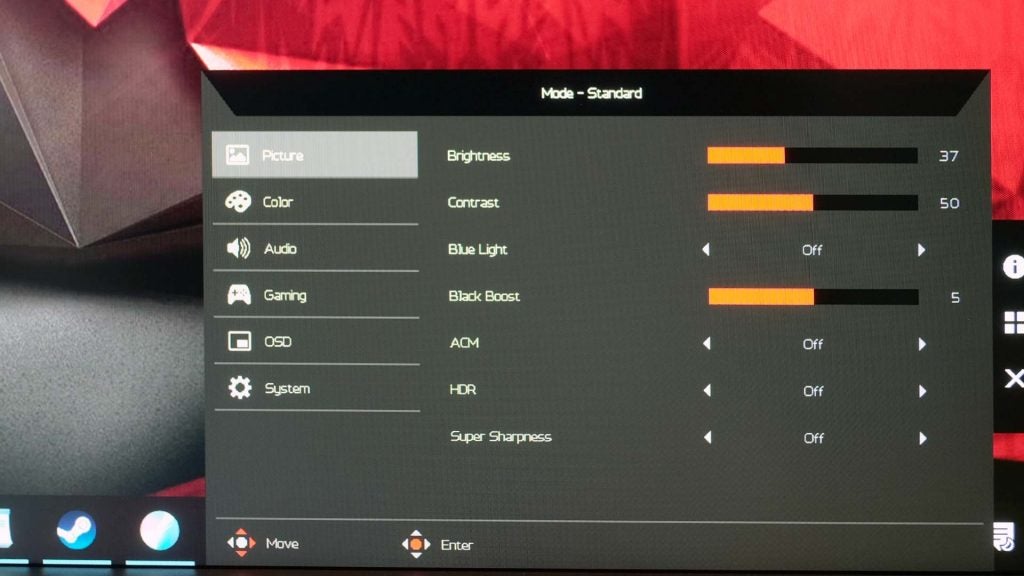 The Acer Predator XB273UGS’s image quality is mostly a triumph. This is an IPS model, so there are no concerns with regards to viewing angles, which is handy if you may end up using the XB273UGS as a bedroom TV as well as a straight-up monitor. With the backlight set to high, you’ll clearly notice that IPS-related glow from any angle, but nothing out of the ordinary.

The 1440p resolution is about right for a 27-inch display, given the current state of PC hardware. If you want high frame rates and advanced lighting/shadow effects, few can afford the sort of hardware needed to display them at 4K resolution. 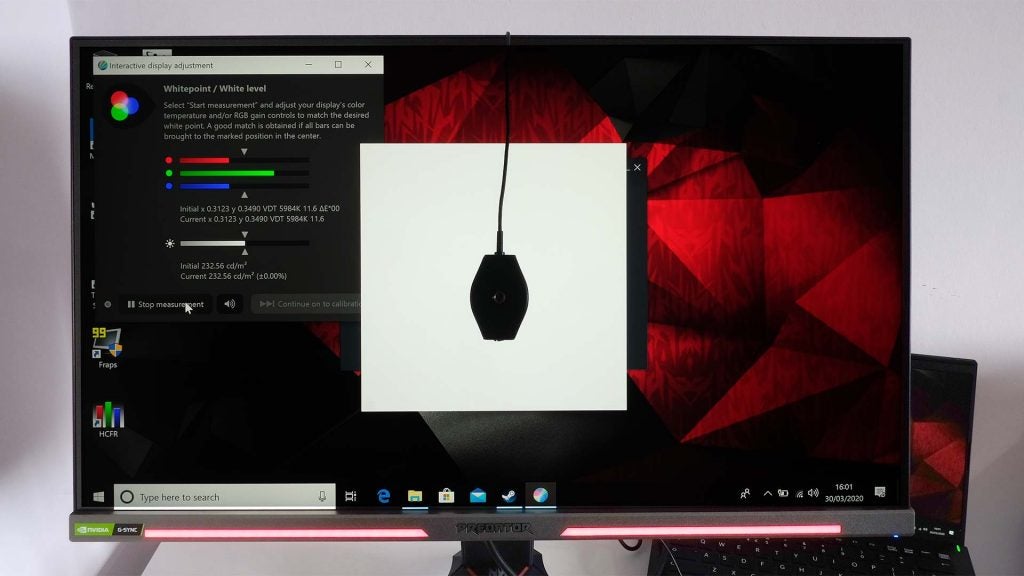 The Acer Predator XB273UGS’s colour reproduction is excellent. 99.8% coverage of the sRGB standard is close enough to the margin of error to call this complete. The XB273UGS also covers 94.2% of the deeper DCI-P3 colour standard. This is a relatively wide colour gamut screen, resulting in games and movies that look rich and well saturated.

Those who require a monitor for certain graphics work may want more though, with the 80.2% coverage of the wider Adobe RGB standard proving fine but unremarkable.

The Acer Predator XB273UGS is also an HDR monitor. Sort of. It complies with DisplayHDR 400, which is the lowest of VESA’s HDR standards, but it falls short of having the brightness or contrast required to deliver a high-end HDR experience. Nevertheless, switch the monitor to the HDR picture preset to watch a YouTube HDR video, and it certainly impresses. 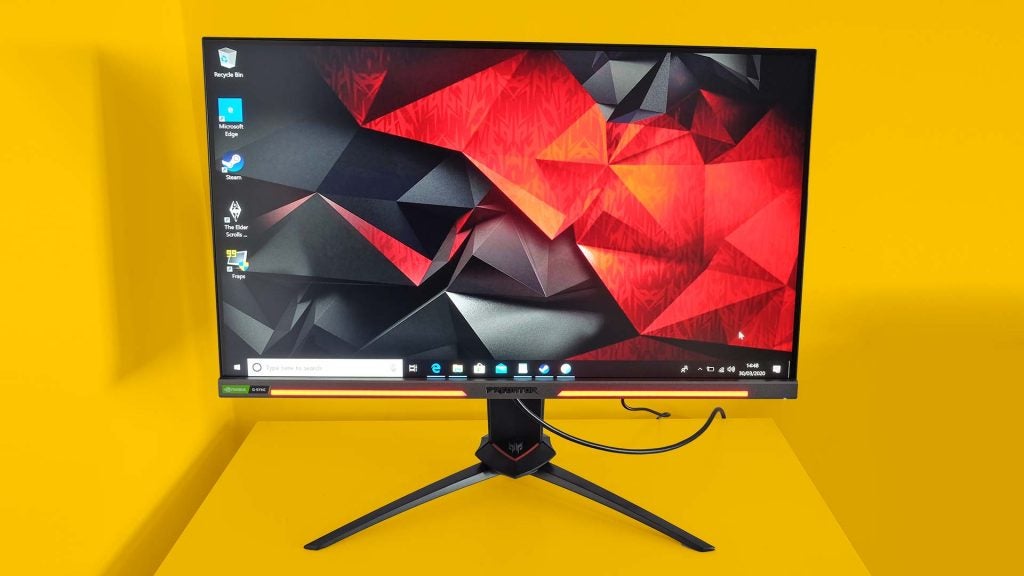 This is mostly thanks to the screen’s colour depth, particularly as vivid colour is one of the most common elements of any HDR demo video. I don’t recommend leaving the HDR mode on all the time, though. It causes excessive sharpening of the image, affecting text and arguably trades away tastefulness for impact.

However, this monitor isn’t a contrast king, which is no surprise given that the XB273UGS is an IPS panel. Acer claims 1000:1 contrast, and it achieves 1162:1.

What is the real-world difference? In a dark room you’ll notice slightly raised blacks on the Acer Predator XB273UGS. However, keep the backlight at a reasonable level and the image continues to look great, even in those conditions. 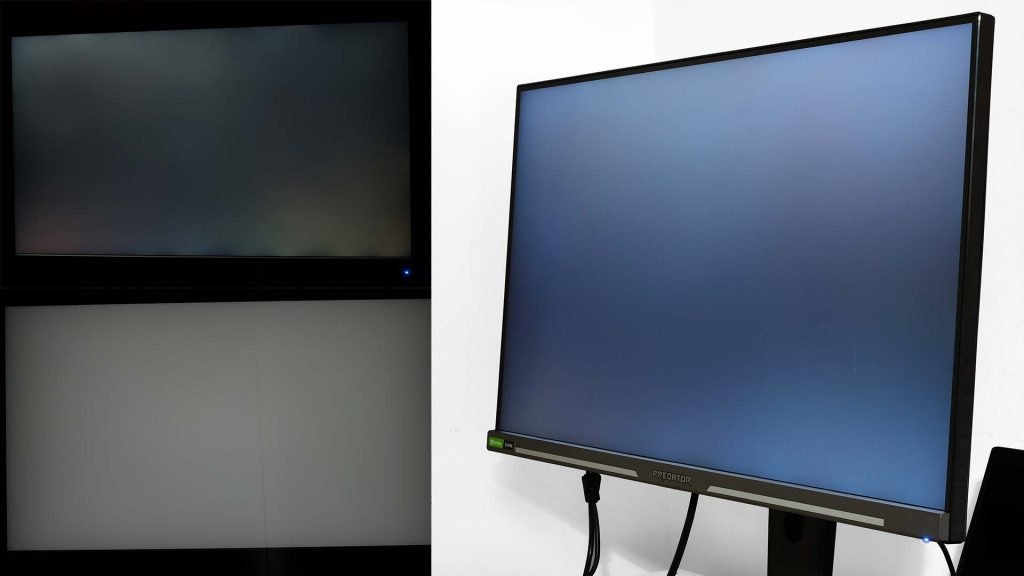 Our sample wasn’t completely free of backlight bleed, with a mild yellowy patch showing in the bottom-right, a brighter spot in the top-left and a slightly red hue to the bottom-left — this is on a dark screen at 100% backlight power. However, the above shots were taken using camera settings to reveal the worst of the underlying issues. And, as ever, backlight bleed will vary from panel to panel.

The slightly mottled display surface of the Acer Predator XB273UGS will be consistent, though. This monitor has an effective anti-glare coating, but it does cause a slight sparkly granularity in areas of block colour or white. It’s sure to offend some eyes, but being aware of the causes certainly helps.

Response time is the other potential concern for an IPS monitor. This panel type simply isn’t as fast as a TN screen of the same level, even if it looks much better in every other respect. 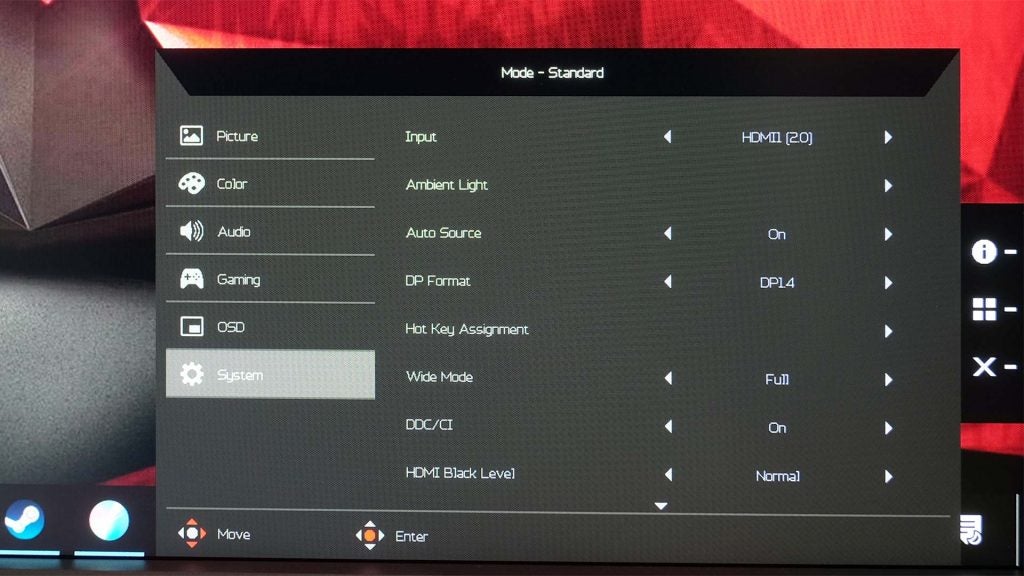 Acer claims a 0.1ms response time, which clearly isn’t realistic by any worthwhile measurement standard. I used a Leo Bodnar input lag tester to get a clearer view. It gives somewhat higher figures than other methods, registering both response times and input lag. It recorded an underwhelming 10ms at the centre of the display, or 25.6ms without the ultra-low latency mode engaged.

I also used a neat little application from monitor-maker Eizo that allows you to assess the motion handling of your display. At 60Hz, the Acer Predator XB273UGS looked poor, with smeared motion and text rendered completely illegible. At 144Hz the improvement was radical, with only a slight difference between it and a response time-focused TN panel – although there was a fraction more localised smearing at the edges of high-contrast objects.

Since this monitor supports both FreeSync and G-Sync, you get the best possible benefits of these high refresh rates, whether you have a graphics card from AMD or Nvidia.

The Predator XB273UGS also supports Overdrive, a feature designed to improve motion by making pixels change their state more quickly. However, the results from our testing indicate you’re better off leaving the panel overdrive setting to “off” or “normal”, as its “Extreme” setting caused some strange-looking outlines around moving objects, similar to the effects of an over-sharpened static image. 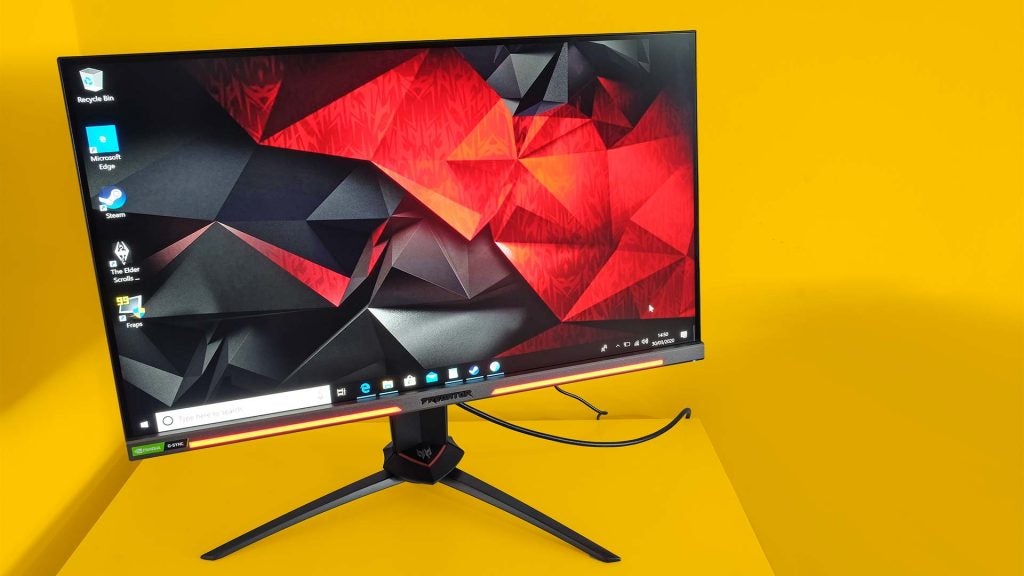 The Acer Predator XB273UGS is a great monitor for use in ordinary rooms, where you wouldn’t be turning off all the lights. Colour reproduction and the real-world ease of an IPS panel are the two biggest strengths here.

VA panels offer better contrast, and TN ones faster response times. But the fast refresh rates of the XB273UGS appear to largely fix the latter, leaving you with only fractionally more ghosting than a fast TN monitor.

This alone makes the Acer Predator XB 273UGS a better choice for FPS and other “fast” games than the MSI Optix MAG272CQR and other VA alternatives. And considering similarly specced previous-generation monitors arrived at £200 more, you’re getting a great all-round gaming monitor for the money.