If you’re after a powerful yet surprisingly portable gaming laptop that starts from under £2000, Acer’s Predator Triton 500 is definitely worth a squint.

Editor’s Note: This is a review-in-progress. We have yet to fully test the Acer Predator Triton 500 and therefore haven’t awarded this a score, but here’s what we think so far.

After being shown off at CES 2019, we’ve finally been able to pick up an Acer Predator Triton 500 gaming laptop, carrying within its slim innards Nvidia GeForce RTX 2080 dedicated graphics.

What is the Acer Predator Triton 500?

Acer’s Predator range of gaming notebooks is well worth considering if you’re after something at the affordable end of the scale that doesn’t skimp on specs. Take the new Triton 500, for example. This power-packed laptop sports a choice of GeForce RTX 2060 or RTX 2080 and an 8th-generation Intel Core processor, all crammed into an impressively slender metal chassis.

Yet the base model costs just £1799, so it won’t completely smash the bank account like some of the very top-end gaming machines (we’re looking at you, Asus ROG G703GX). And if you want the top-end RTX 2080 model, that’ll be almost £2500 – still cheaper than rivals such as the Razer Blade 15, mercifully.

The slim frame of the Triton 500 measures a snifter under 18mm and weighs just a tad over 2kg, which is all the more impressive when you consider the super-smart tech inside. From the outside, Acer’s latest Predator certainly doesn’t look much like a gaming laptop. Little details such as the angular corners and of course that LED-accented logo offer hints at the nature of this beast, but the usual over-the-top frills and garish decoration of gamer machines are  missing in action.

Decked out all in black, this is a pretty sleek machine, and it’s sturdy too. The lid is rather flexible, which gave me some concern at first, but I didn’t notice any warping of the display as a result. Meanwhile, the rest of the body is solid in every area, so you can chuck the Triton 500 in your backpack and bash it about the place without worry. 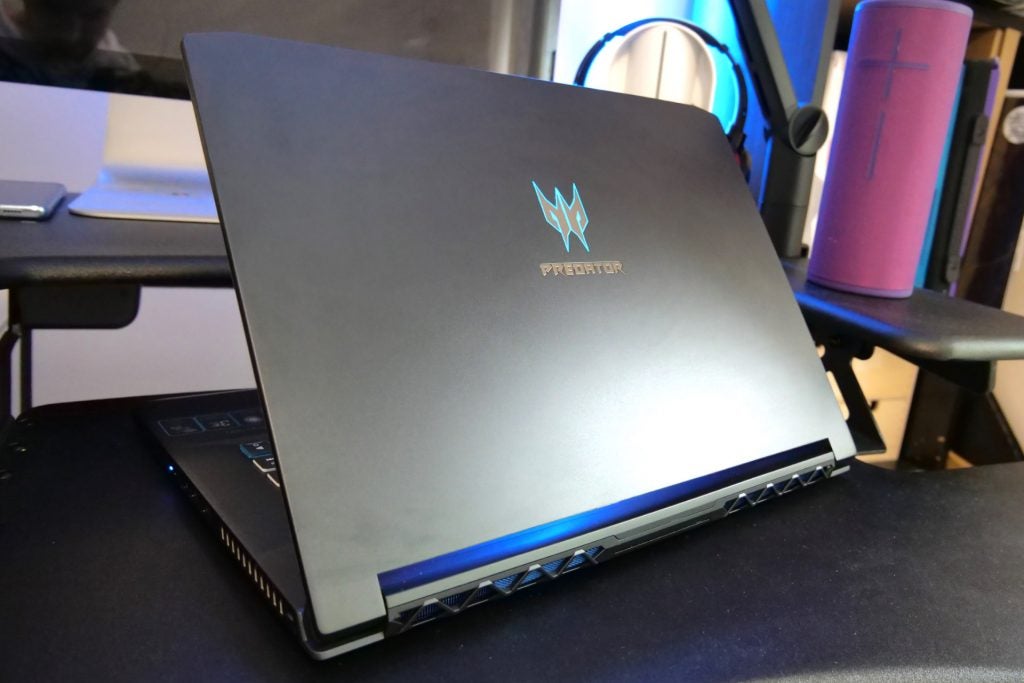 Of course, if you’re going to be lugging this hefty 2.1kg portable around all day, your shoulders won’t be thanking you. Still, compared with some rivals around this asking price, the Predator is definitely rather ‘lightweight’.

Positioned along those slim edges you’ll find a respectable number of ports. Gigabit Ethernet is of course a must if you don’t have superfast Wi-Fi for those online fragfests. You also have three USB 3.0 ports and a Type-C Thunderbolt connection, which is ideal when using external drives or hooking up a monitor. In fact, the Triton 500 also packs in HDMI and Mini DisplayPort, so you can connect three screens at once.

You get a pretty decent built-in panel for gaming on the go as well. The 15.6-inch IPS display only supports a Full HD maximum resolution (1920×1080) sadly, so there’s no 4K visuals direct through the Predator. Bit of a shame when you consider the GPU grunt on offer, although some Ultra HD action would also jack the price up considerably.

The 144Hz refresh rate means consistently smooth visuals and I didn’t see any tearing or other issues, as you’d expect with full support for Nvidia’s G-Sync. Such a high refresh rate is important if you want to play fast-paced first-person shooters competitively. 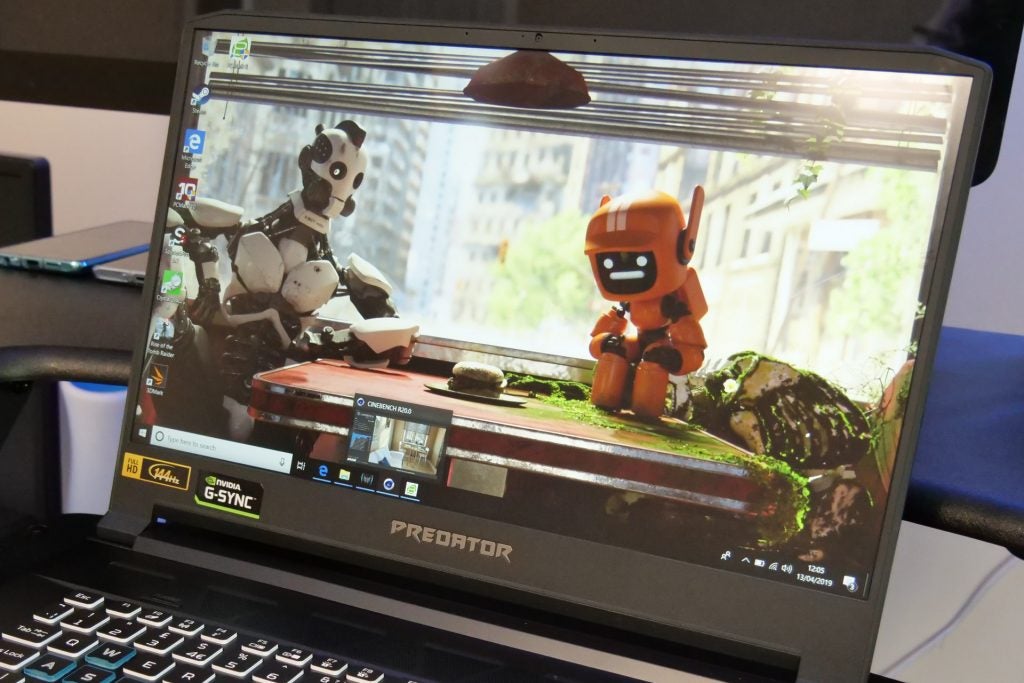 Testing with a colorimeter revealed the Triton 500’s display covers 96% of the sRGB gamut. Not quite blanket coverage then, but a decidedly strong effort from a gaming laptop ensures you can expect naturally vibrant colours to shine from the screen. As for Adobe RGB and DCI-P3 coverage, the Acer Predator Triton 500 gave me 75% and 77%, which means in a pinch, you could use this for photo and video editing. The colour temperature came close to optimal on default settings with a slightly warmer reading of around 6300k, while contrast levels were reported just shy of 1000:1.

If you’re planning on gaming outdoors, you might want to find a shady spot. The maximum brightness of 320 nits isn’t a bad result, although I struggled to see what was going on in darker games when playing in bright sunshine. That’s despite the anti-reflective finish.

I had no issues at all when gaming with the Triton 500’s built-in keyboard. This tri-zone RGB keyboard looks very pretty when it’s all lit up, and as usual you can customise the backlighting to suit your tastes and environment.

To do so, just tap the dedicated Predator Sense key, which loads up Acer’s pre-installed gaming utility. This allows you to play around with the laptop’s general settings, quickly and conveniently. You also have a Turbo button up top, which is basically this laptop’s nitro injection. A push activates the Predator’s overclocking feature whenever you need some extra grunt in-game. 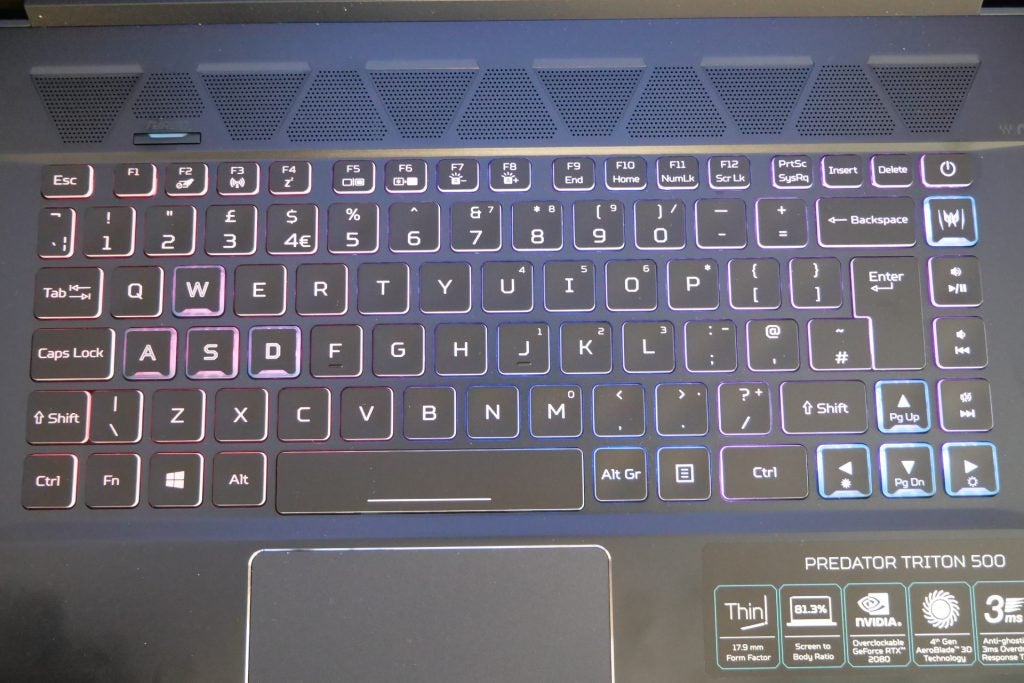 The board itself sports your typical chiclet layout, with each key given plenty of room to breathe. There’s no space for a separate number pad however, while you don’t get any dedicated shortcut buttons to customise either.

I found the keyboard had a pleasing bounce to it, without proving too flexible. Hammering those keys for all they’re worth won’t numb your fingertips and I was happy with the speed and response rate.

That touchpad is fine for general use as well, but of course you’ll want to be slapping in a proper mouse when it’s time to game.

Performance is one of the Predator’s highlights, with plenty of power on offer for any title you choose – and that’s without even touching the overclock abilities. This laptop comes in a single SKU as far as the chipset goes, with an 8th-gen Intel Core i7-8750H platform on board. That’s backed by either 16 or 32GB of DDR4 RAM, depending on the model you get, but 16GB is easily more than enough to handle the latest games.

My review model packed in 16GB of memory and churned out a very respectable PC Mark 10 score of 5696, while Cinebench returned a score of 2320. Such scores sees this gaming laptop boast some of the best processing speeds we’ve seen in a portable. 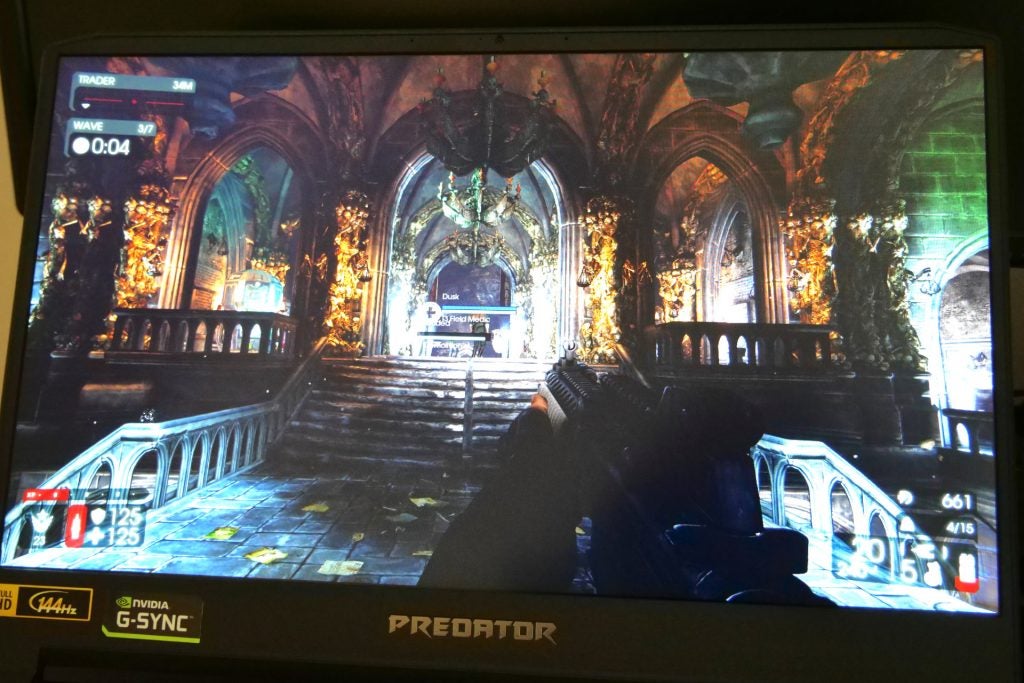 Graphics are handled by one of Nvidia’s fresh GeForce RTX 2060 or 2080 dedicated GPUs, complete with full ray tracing support for realistic lighting effects (if you can find a game that supports it). Stick any recent game on the maximum detail settings and your eyeballs will thank you. You can expect glorious graphics, matched by a pleasingly smooth frame rate.

Now, a gaming laptop can of course pack the very best specs in the world, but it’s all for naught if the machine overheats and throttles. Thankfully, Acer’s Aeroblade 3D cooling system, packing a triple fan setup, helps to quickly dispel any warm air via the Triton 500’s various vents. Even after an intense hour of game time, we didn’t see any slowdown that could be attributed to things getting a little toasty. And while the laptop’s bottom certainly isn’t comfortable to rest on your actual lap when gaming, the metal surface doesn’t ever get more than warm-ish.

Of course, if you decide to get overclocking, you can expect the fans to immediately start whirring like helicopter propellers. To say that things get a little bit loud is an understatement. We pretty much left that Turbo button untouched, as Intel’s platform handled games perfectly without needing a leg-up. 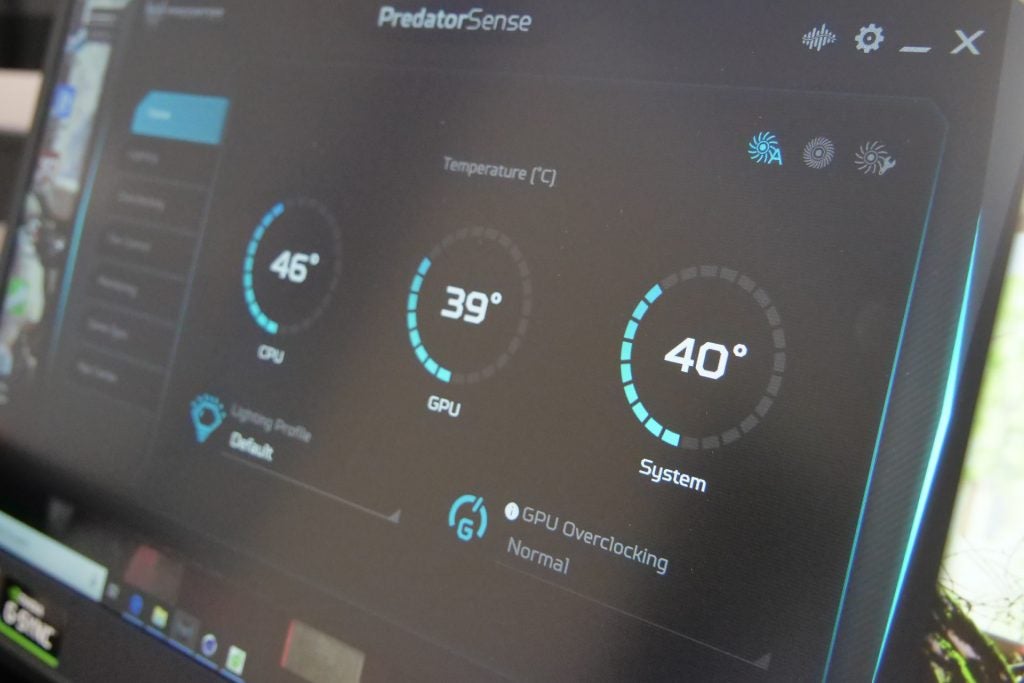 The Predator’s premium performance stretched to that 512GB SSD as well (which can also be doubled up in a RAID 0 setup if you’re feeling flush). With read scores of 3356MB/s and write speeds of 2528MB/s, you shouldn’t be hanging around waiting for that next level to load.

We’ve yet to fully assess the gaming prowess of the Acer Predator Triton 500, and will do so once we’ve got a full set of benchmark scores and frames per second times.

Don’t worry if those fans get too loud, because you can always drown them out with the Triton’s built-in speakers. Well, you won’t be able to completely smother that whirring when the cooling system is going full-throttle, but the stereo setup is still respectably powerful. Gunfire sounds suitably fierce, while schlocky sounds like a writhing body being skewered on a hook in Dead By Daylight are rendered in a disgustingly meaty manner.

The Predator also supports Waves NX 3D Sound when you plug in some headphones, for a proper surround sound experience.

Battery life is rarely a selling point of a gaming machine, and of course the Triton 500 is no different. From a full charge, you can expect between two and a half to three hours of mixed use before Acer’s machine is depleted. This was confirmed by our PC Mark 8 battery tests, which returned 165 minutes and 168 minutes respectively in the home and creative benchmarks.

When gaming, naturally you can expect the battery life to be further diminished. We didn’t manage more than 90 minutes when blasting through a title such as Killing Floor 2 or Strange Brigade.

Should I buy the Acer Predator Triton 500?

With its asking price of under two grand, the Predator Triton 500 is strong value for money for demanding gamers who need a genuinely portable device. While the lack of a dedicated 4K display is a shame considering that muscular GPU, an Ultra HD panel would have jacked up that cost – and at least you can sort that out with an external screen (or three).

We can’t give you a final verdict just yet though, as we’re in the process of finishing those in-game benchmark tests. We’ll update the review and give the laptop a final score in the coming days.