A high price and love it or loath it design makes the Orion 9000 a hard sell right now.

What is the Acer Predator Orion 9000?

The Predator Orion 9000 is Acer’s flagship desktop gaming PC. Available in a range of configurations, this monster of a machine can house multiple graphics cards and the very highest-end CPUs available, along with plenty of storage options too.

With its enormous case, replete with handles on the top, wheels at the back and a plethora of RGB lighting, this is far from the last word in subtlely. However, if all out performance and a bold design statement is what you’re after, the Orion 9000 may be right up your street.

I’m not joking around when we say this is a big PC. With maximum dimensions of 643 x 299 x 700mm, it dwarfs standard (midi) PC cases such as the Phanteks Enthoo Evolv and even tops full-tower cases such as the Corsair 900D. It’s a far cry from the general trend towards more compact PCs that we’ve seen in recent years, like the MSI Vortex G25 and Corsair One Elite.

It’s no shrinking violet in terms of styling either. A lot of the reason for those extreme dimensions is the angular shape of the case that gets wider towards the bottom. Look through the ventilation grilles on the front and towards the bottom, you can see there’s fully 100 mm or so of essentially empty outer shell before the fans that are housed in the front of the case proper. 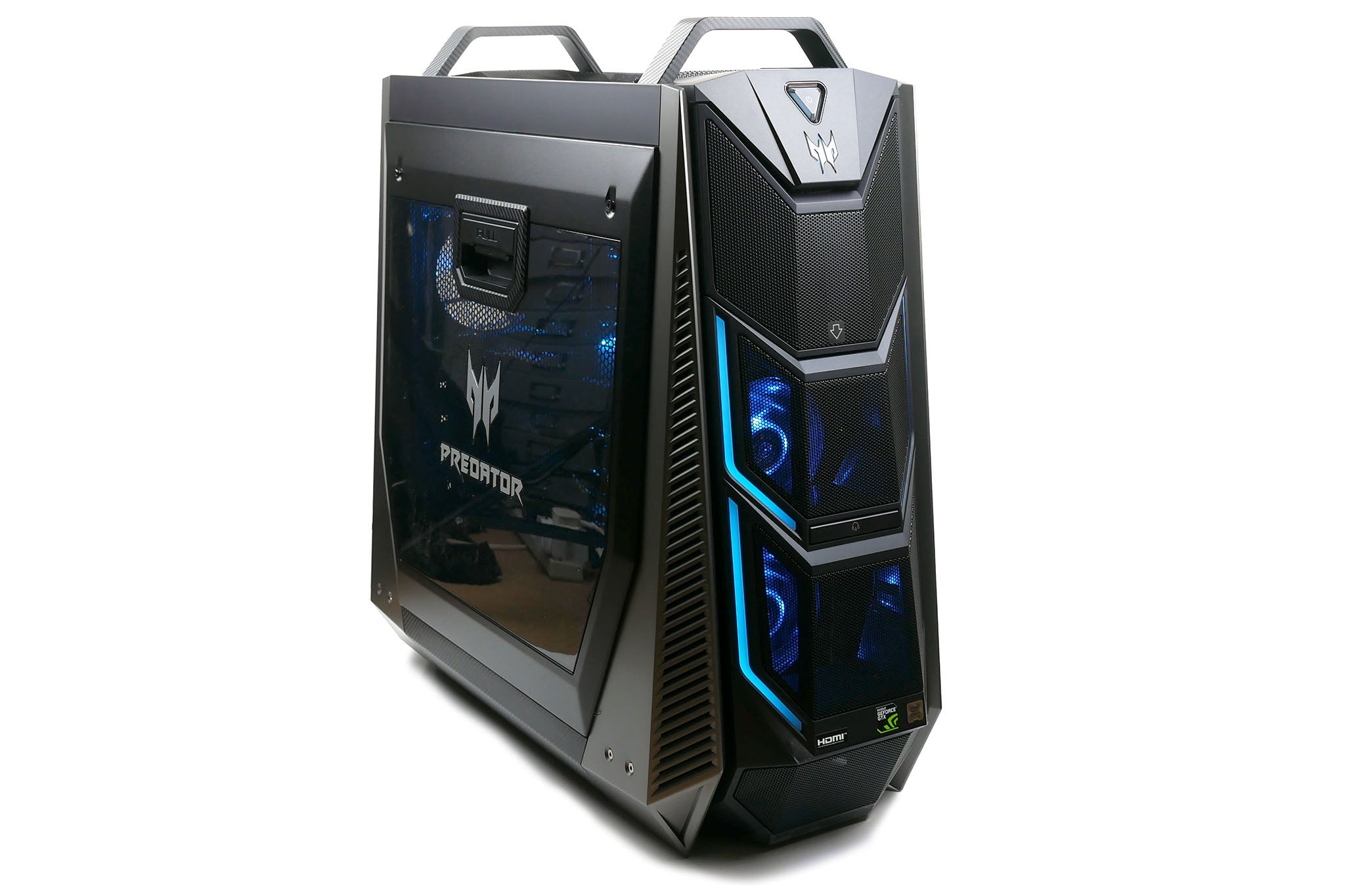 A hi-res press render of the Acer Predator Orion 9000. Check out those grilles.

There are also oodles of lights adorning this machine. The front houses a light-up power button and Acer Predator logo at the top while lower down are Predator logo-aping lines flanking the ventilation grilles. Inside you also have illuminated fans and matching LEDs on the motherboard, all of which can be controlled through Acer’s software.

Along with the prominent Acer Predator logos and text on the two side panels, the pull-releases for said side panels, the handles on the top and of course the wheels on the back, it’s all a bit much for our liking. There’s potential for it to have a certain futuristic, other-worldly appeal but it just doesn’t get the balance right, as compared to a more cohesive design like with Alienware PCs.

Build quality is also nothing special. The bulk of the case is plain steel – rather than more premium aluminium – leaving most of the design elements to be built from plastic. It largely all feels good and sturdy but there’s none of that sense of heft of premium materials that comes with the likes of the Corsair One Elite. 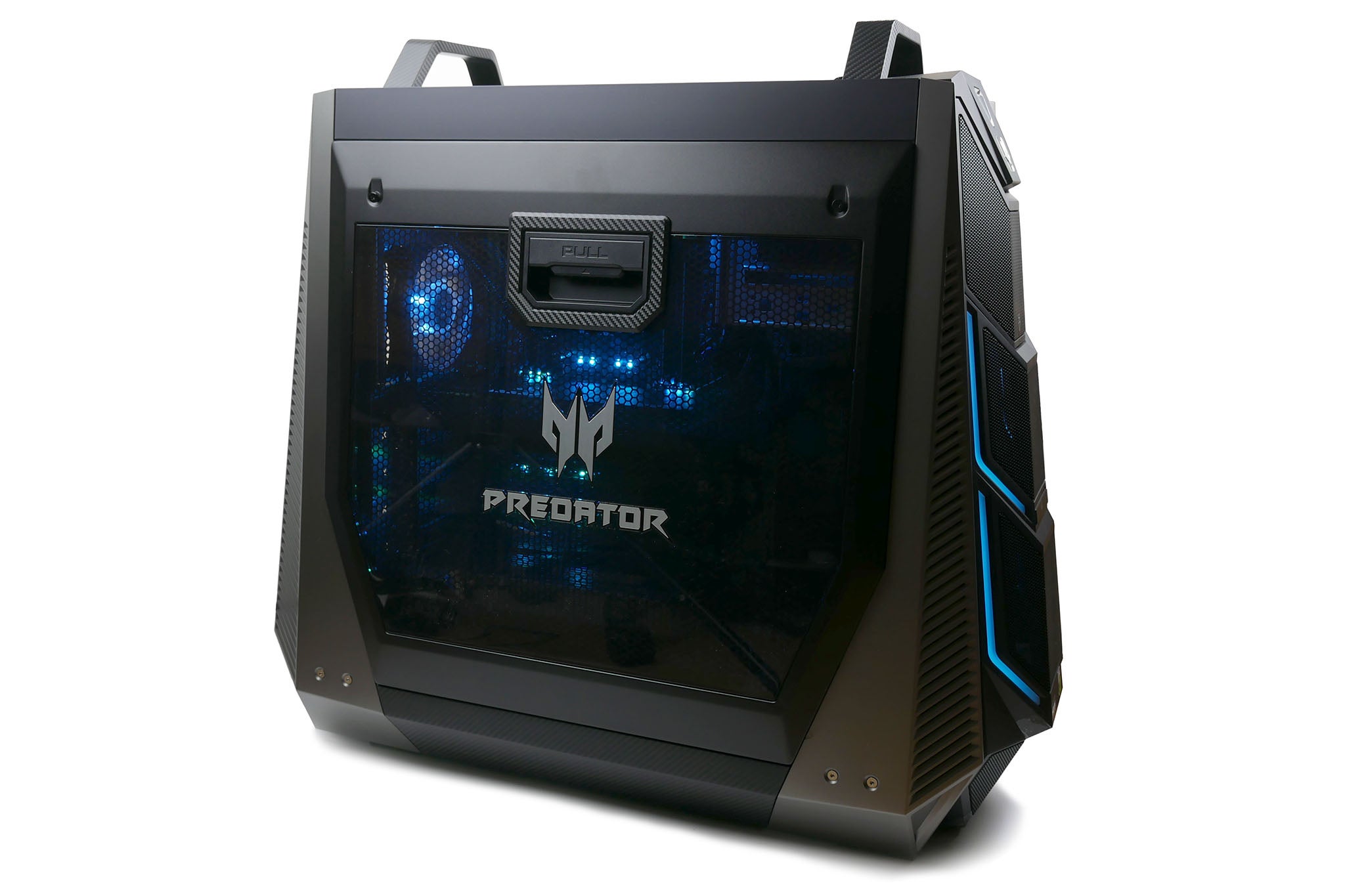 Carry handles and travel case-style wheels make it easy for you to lug the Acer Predator Orion 9000 about.

What you can’t knock this PC for, though, is the sheer amount of features it packs into its chassis. Those carry handles are useful, as are the wheels at the back. You have to tilt the PC back onto the two wheels, like an old-school wheely suitcase, so it’s not quite as convenient as a full set of casters, but it means the PC stays nice and secure when it’s not being moved.

Round the front of the case there’s a pop-out headphone stand and if you press in the top ventilation grille it flips down to reveal an optical drive bay containing a DVD-writer drive.

On the top of the case, there are three USB 3.0 ports, a Type-C USB port plus headphone and microphone jacks, all of which sit behind a Turbo button. Tap the latter and it will automatically overclock the PC. The button works in conjunction with Acer’s PredatorSense software that’s preloaded onto the machine and provides, lighting, overclocking and fan control.

Also useful are those quick-release side panels. The handles may look clunky but it doesn’t half make it easier to pop the panels on and off. Although, the fact you have to leave the two screws in the top corners of the panel unscrewed and hanging lose to allow the panel to open seems to to defeat the object a little. 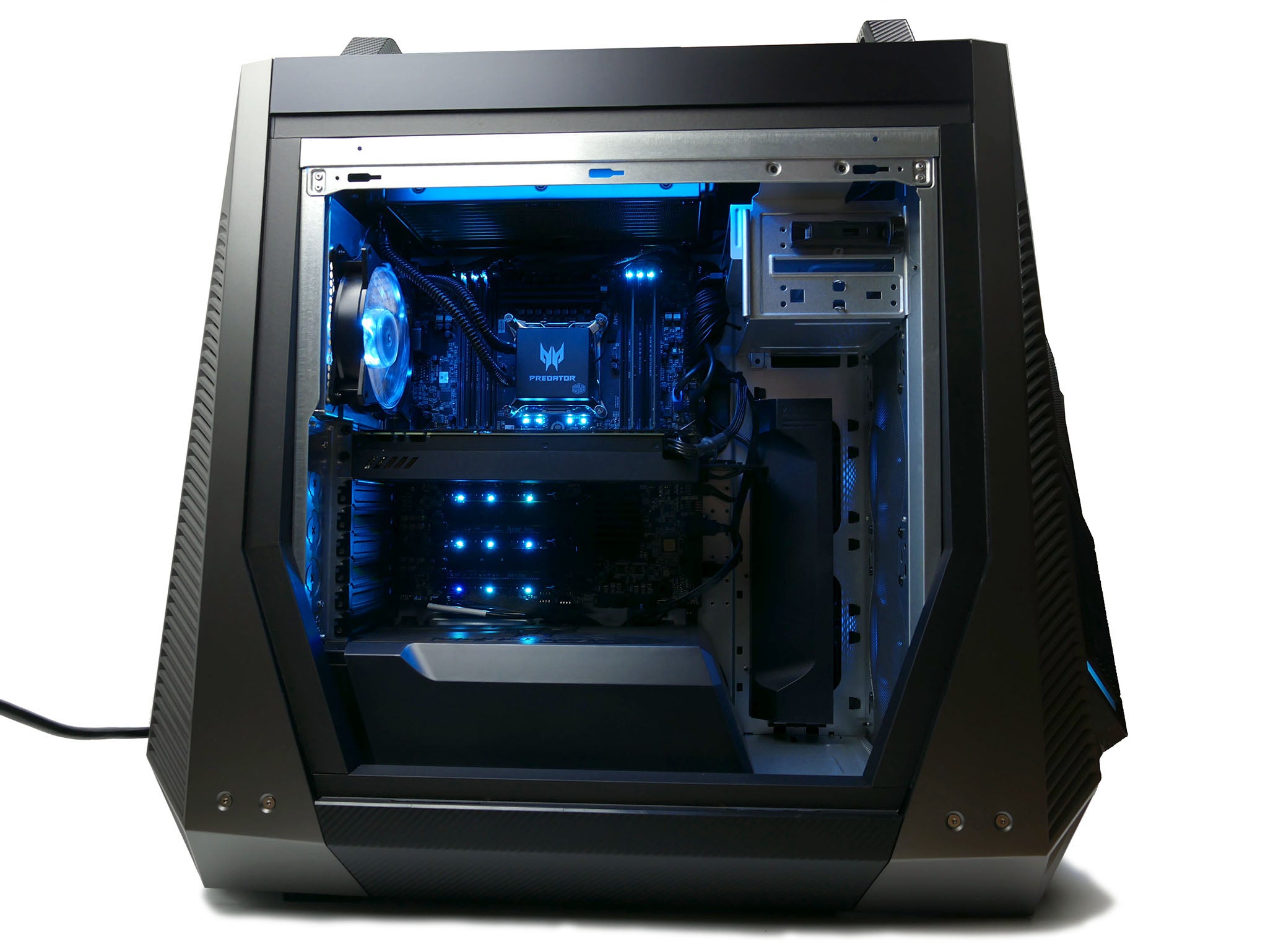 The removable panels of the Predator Orion 9000 make for easier modding.

Inside the case, you’ve got plenty of space for the oversized motherboard and potential future upgrades. There are three spare PCI-E expansion slots, along with six empty RAM slots, plenty of SATA connections, plus there’s a spare 5.25-inch drive bay. Remove the back/right side panel and there’s room for an extra 3.5-inch drive and four 2.5-inch drives.

The Acer-branded motherboard includes a good selection of connectivity round the back, with five USB 3.0 ports, one USB Type-C, two USB 2.0, a combi-PS2 port, gigabit Ethernet, a full complement of surround sound audio jacks and an optical S/PDIF audio output. Meanwhile, the included graphics card has two DisplayPort 1.4, two HDMI 2.0 and a DVI-I.

As with most such PCs, there are a range of different configurations of the Orion 9000 that you can buy, including models that include two graphics cards. However, at least here in the UK, all the models available only include one hard drive and one SSD, so you should always be able to rely on having plenty of spare drive bays. 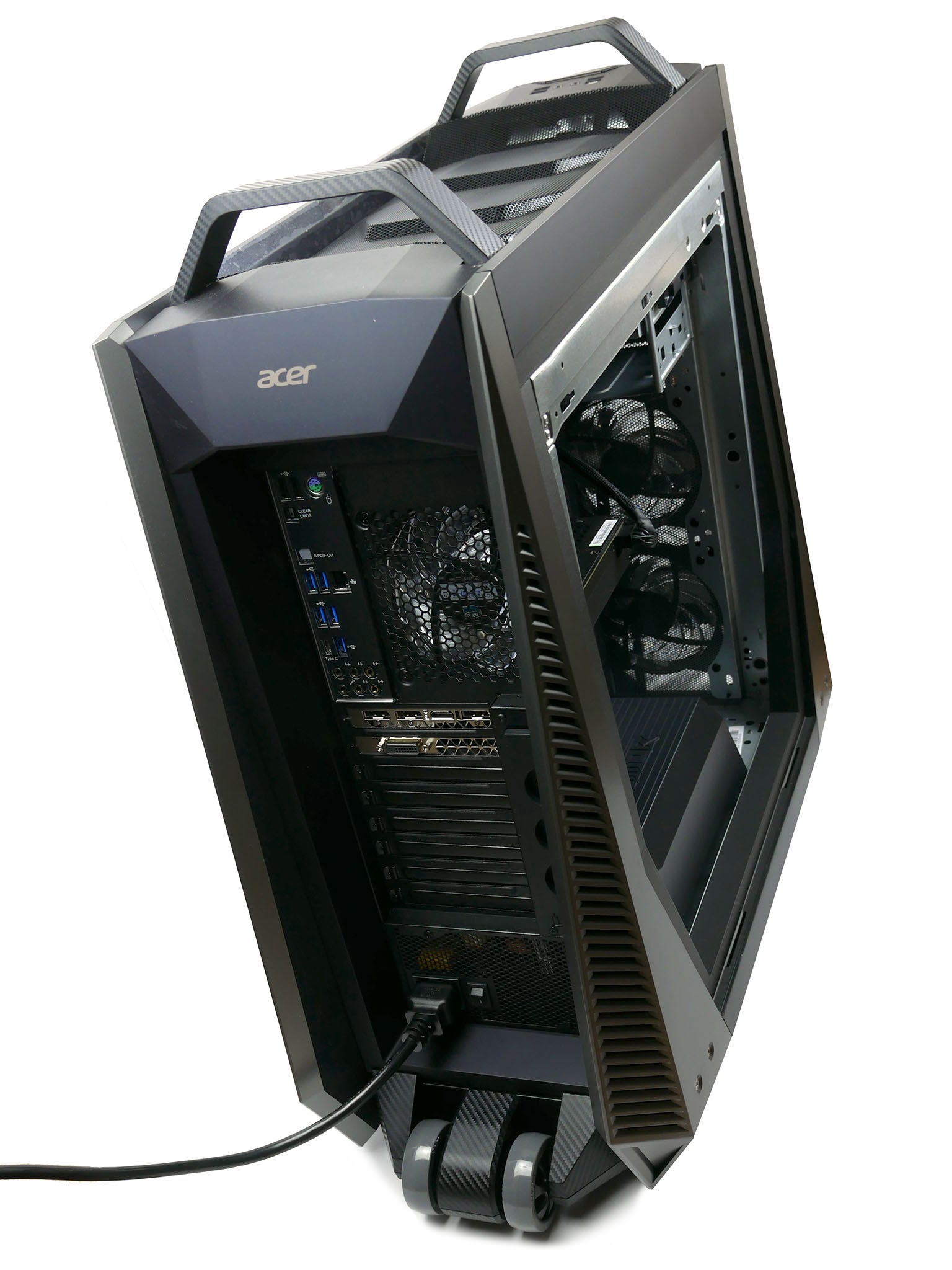 All options also include either an Nvidia GeForce GTX 1080 or GTX 1080 Ti – or two of the latter – while RAM options range from 16GB up to 128GB. Storage options include up to a 512GB SSD, 4TB hard drive and 256GB Intel Optane memory.

The configuration we have for review uses a six-core/twelve-thread Intel Core i7-7800X and an Nvidia GeForce GTX 1080. For most gamers, this isn’t the optimal balance, with a Core i7-8700K and GTX 1080 Ti being a far better balance for gaming, for what would work out as the same price, in terms of raw compoment cost.

Acer has kept the amount of preinstalled software on the Orion 9000 to a minimum. You get its own PredatorSense software, Norton Security suite, Dropbox with a free 25GB boost and that’s about your lot. PredatorSense is pre-installed on the Predator Orion 9000, and gives you quick access to your key gaming settings.

In fact, so basic is the installation that Nvidia’s full display driver wasn’t installed. The automated Windows installation version was running, so games run properly but in order to enable G-Sync displays and tweak other display settings we had to install the full driver ourselves.

The lack of a full driver also had the odd affect of making it take forever for a right click on the desktop to do anything. It would sit there for minutes before the menu would appear. The full install sorted this out.

As I’ve come to expect, the anti-virus installation significantly impacted performance so for our performance testing I disabled the real-time scanning.

At the heart of this Orion 9000 is the Intel Core i7-7800X, which frankly isn’t the best choice of CPU for a pure gaming machine. It’s clock speed that counts for gaming and the 7800X trails some way behind the 8700K.

Nonetheless, this is otherwise a very capable processor. Its six cores are hyperthreaded so can churn through 12 processing threads at once, meaning multi-tasking and heavily multi-threaded tasks are dealt with easily. Though even here the cheaper 8700K is still faster. 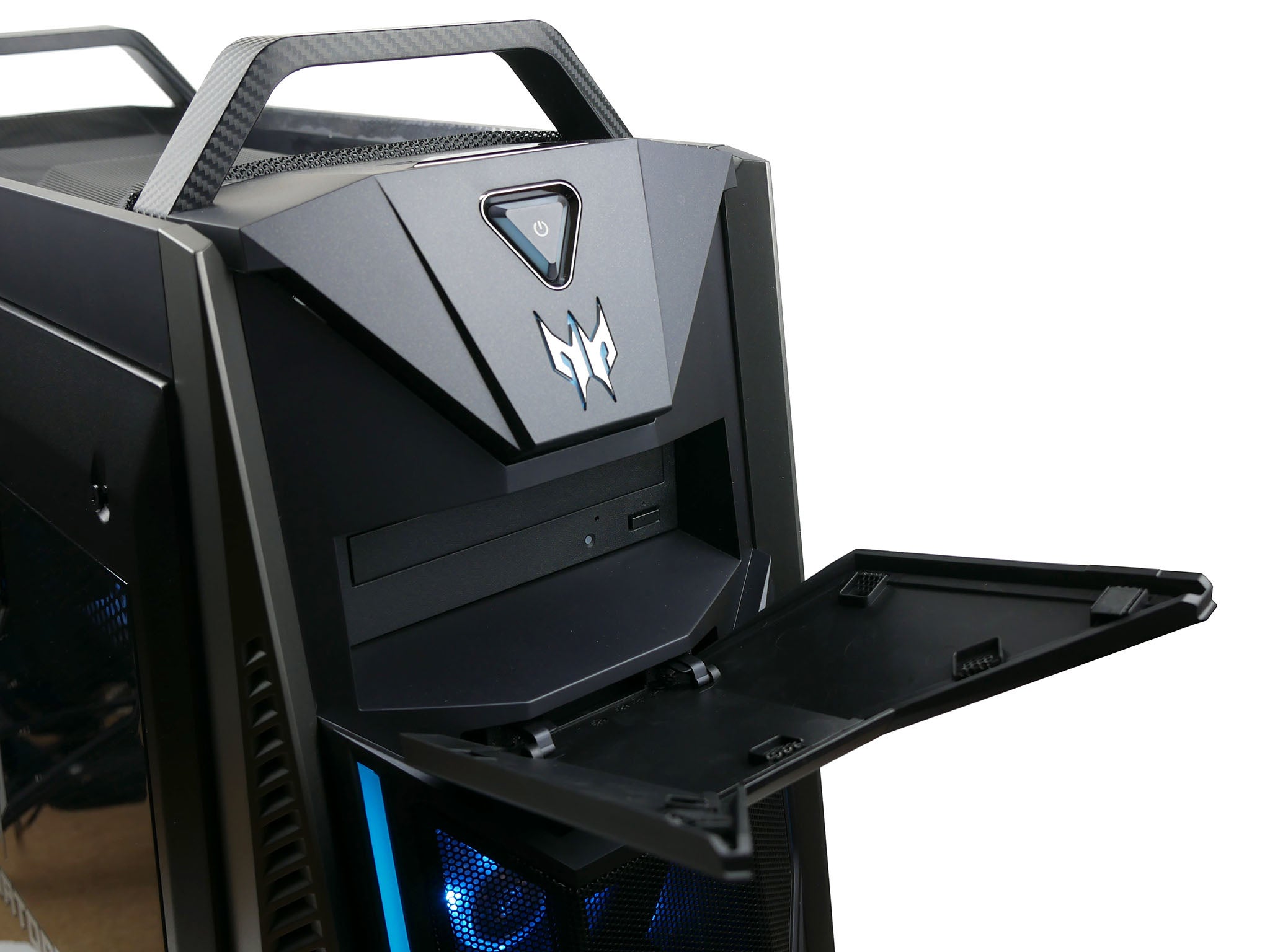 For instance, in Geekbench 4 this machine scores 4454 points in the single threaded test and 19538 in the multi-threaded test. In comparison, even the ultra-compact Corsair One Elite outpaces it with scores of 5365 and 23290 respectively, thanks to its 8700K.

Quite simply, it only makes sense to opt for the socket 2066 motherboard used here if you’re going to use a faster CPU than this, such as the 7820X or 7900X. Otherwise, opt for the 8700K version of this PC.

As for gaming, this is still a very capable machine, with its GTX 1080 easily providing playable performance at resolutions of 1440p and below, plus 4K is possible in some games.

For instance, in the relatively demanding games, Rise of the Tomb Raider and Middle-earth: Shadow of Mordor, the Orion 9000 delivered 93fps and 116fps at 1440p, respectively. Meanwhile, in 3DMark Fire Strike Ultra it earn an impressive 5134 points.

Notably, though, the likes of the similarly priced and far smaller Corsair One Elite and Zotac MEK1 outperformed it. You’ll want to opt for one of the Orion 9000 systems with a GTX 1080 Ti or two GTX 1080 Ti’s to get truly class-leading performance.

As for the rest of the system’s performance, the SK Hynix SSD provides blisteringly fast read speeds of 3178MB/s so system boot and game loading speeds are about as fast as they come. A write speed of 976MB/s is a little more pedestrian but still plenty fast enough for most day-to-day needs. 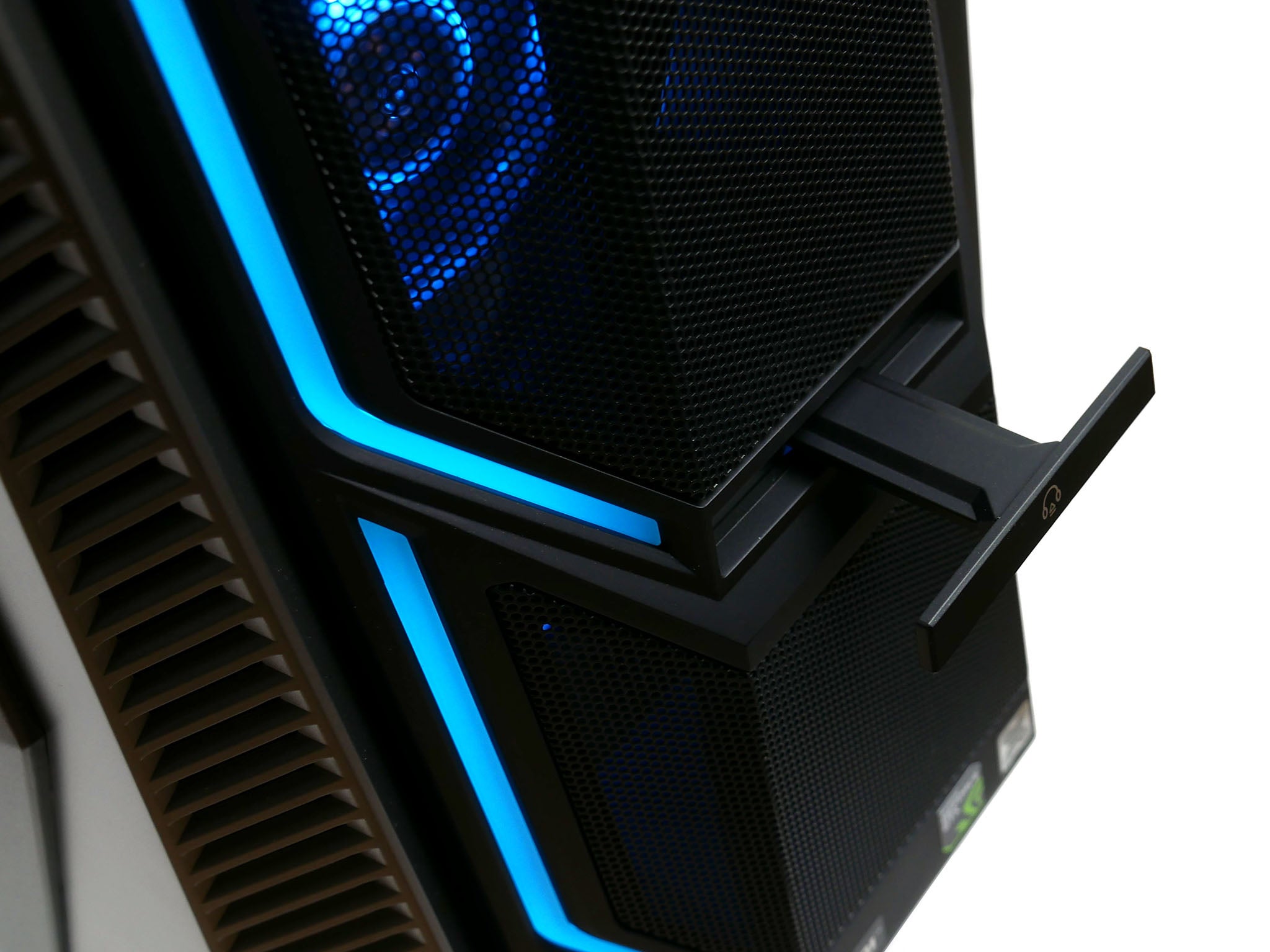 Like many gaming PCs, the Predator Orion 9000 features a pop-out hook for your gaming headphones.

As for the 1TB hard drive, it’s as slow as you’d expect – this isn’t a performance hard drive – but it’s there to provide some basic mass storage for all those family photos.

As for the Orion 9000’s cooling, you’d certainly hope for some impressively low numbers given the amount of space for air to flow round the case. Sure enough, the CoolerMaster-branded all-in-one liquid cooler with its 240mm radiator and twin fans does a fine job of keeping the CPU cool. At idle it was hitting just 24°C while under load it rose to only 67°C.

Likewise, the graphics card didn’t have any issues with heat. At idle it ticked along at 37°C while under load it rose to a toasty but not alarming 80°C.

The problem is, that impressive cooling comes at the expensive of noise. At idle the whole system ticks along at around 36dB. That’s enough to be not excessively distracting but certainly noticeable above a quiet office environment.

Meanwhile, if the CPU is put under heavy strain this figure rockets up to 46dB, which is very annoying. Thankfully pushing the graphics card doesn’t increase this.

What’s more, this is all with the Predator Sense Fan control set to Auto. Crank it up into gaming mode and it gets even louder!

As for the overclocking button, this pushes the 7800X from a typical clock speed of 4GHz while under load to 4.2GHz, which is a nice little boost considering it’s a fully warrantied and guaranteed leap. In gaming, this makes almost no difference as only the CPU is overclocked, but it’s still nice to have. 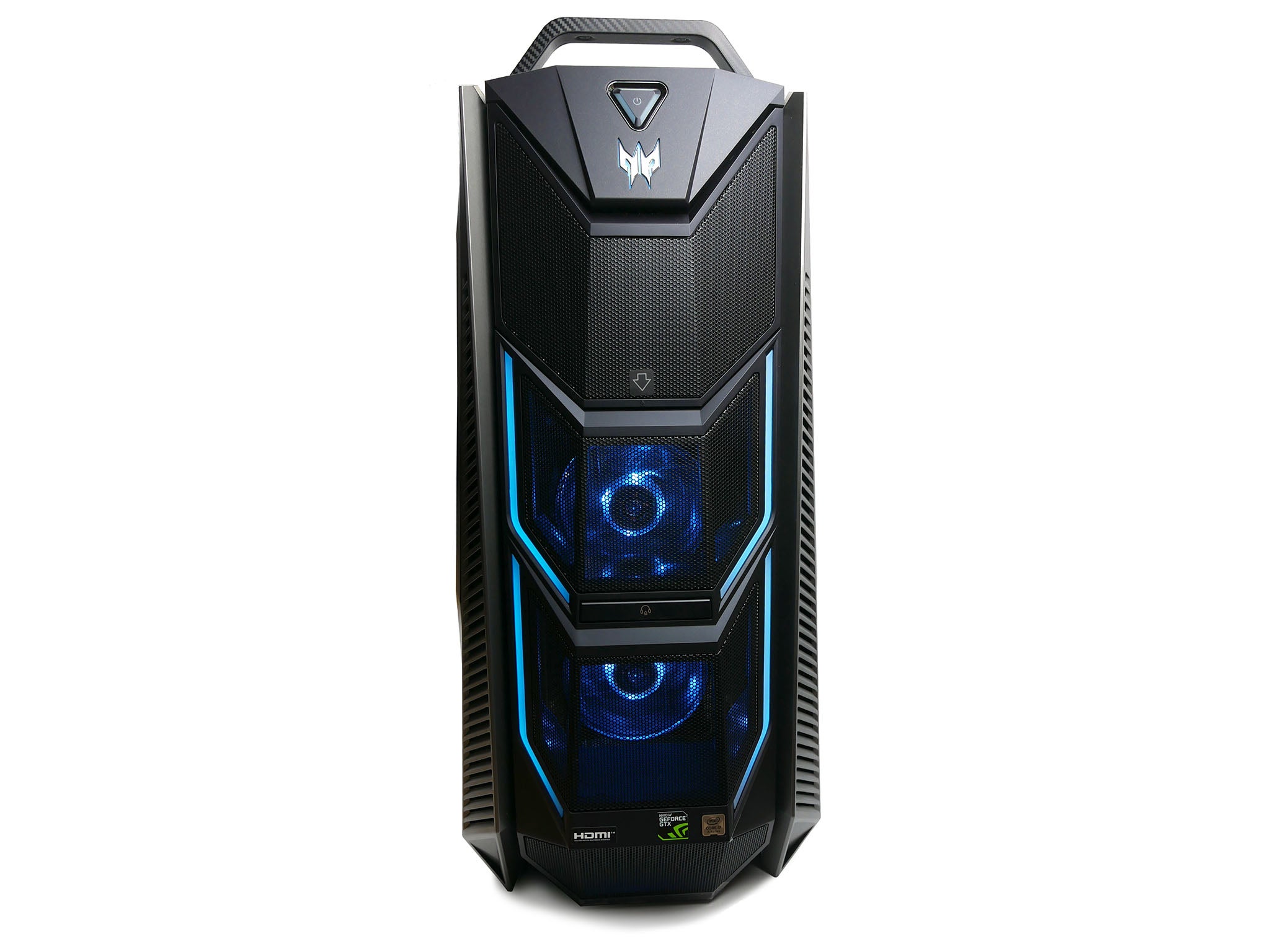 The Predator Orion 9000’s bite is as good as its bark – turn on gaming mode and those purring fans start to roar.

Why buy the Acer Predator Orion 9000?

The Orion 9000 has the potential to be a perfectly impressive desktop gaming PC. It’s mighty powerful, has plenty of cooling and has several nice extra features.

The inclusion of an optical drive is something of a rarity these days, the pop out headphone stand is neat and the carry handles, wheels and quick-release side panels make it quite a practical beast too. The one-touch overclocking button is also a welcome touch.

However, there are two major problems with this machine. The first is the design. Even with the current RGB craze, the overall look here is a bit tacky. That’s a personal observation perhaps, but however you feel about overlit gaming PCs, objectively, the sheer size of the Predator Orion 9000’s case means it’s not exactly an easy machine to hide away under a desk – or fit on top of one.

The other issue is the availability of different configurations. Depending on where you are in the world, there are a whole range of different models listed on Acer’s site but whether you can find them anywhere is another matter.

As such, we’d suggest waiting for prices to drop before seriously considering one of these machines.

A high price and love it or loath it design makes the Orion 9000 a hard sell right now.