How good is the Acer Predator Helios 700 performance?

Since the Acer Predator Helios 700 features multiple performance modes, I ran a number of in-game benchmarks with several different modes activated. This was to demonstrate the Helios 700’s capabilities in the most optimal – not to mention noisy – condition, alongside reviewing performance in instances where you wanted to keep the noise down, for risk of annoying your colleagues/flatmates/neighbours.

There are two 4th-gen AeroBlade fan units here, one to cool the processor (an Intel Core i9-9980HK) and another to cool the GPU (an Nvidia RTX 2080).

The Helios 700 won’t let you access any of the advanced fan settings, or overclock the components beyond “Fast” if you’ve got the keyboard covering the fans. If you’re not plugged into the mains, the software won’t even let you access the overclocking options. Short version: if you want to overclock, you’re not going to be gaming on the move. 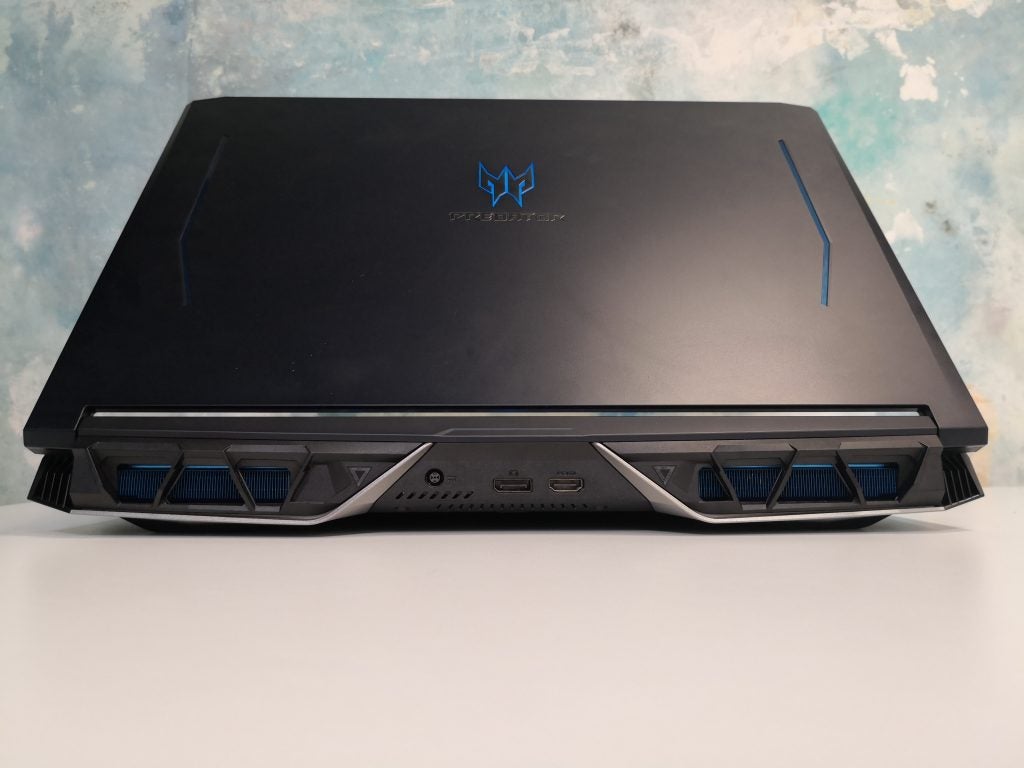 I ran the same set of benchmarks three times using the separate setups. First of all I conducted tests with the keyboard pushed all the way back so the AeroBlade fans couldn’t drag in air.

Secondly, I pulled the keyboard down, exposing the fans and setting them to auto. The majority of the time, I’d see the Helios 700 push the CPU and GPU performance to “Boosted”. This typically sees clock speeds rise to 4300MHz and 1900MHz respectively, and the fans turn at 4700rpm and 4300rpm.

Finally, I ran tests with the fans exposed and permanently set to spin at full speed, and had the “Extreme” overclocking option selected. This was to gauge performance when the Helios 700 was pushed to the absolute limit.

In this scenario clock speeds rose to around 4400MHz and 1960MHz respectively, with the fans turning at approximately 4800rpm and 4400rpm.

I benchmarked the usual Trusted Reviews’ triumvirate of titles – Shadow of the Tomb Raider, Ghost Recon: Wildlands, and Dirt Rally – to provide an idea of how the laptop will handle resource-hungry AAA titles, older games, and multiplayer titles. While it lacks an in-game benchmark, I also yomped around various levels in Battlefield 5, specifically to see how ray tracing fared.

Here’s how I got on:

How does ray tracing look on the Acer Predator Helios 700?

Since the Helios 700 comes with a 20-Series Nvidia graphics card, you can enjoy real-time ray tracing, a new graphic technology that better simulates lighting effects.

At the moment, just a handful of titles support ray tracing effects, and despite 20-Series GPUs being nearly a year old, this remains the case.

For the curious, here’s how I got on playing Battlefield 5 with ray tracing both on and off on the Helios 700. 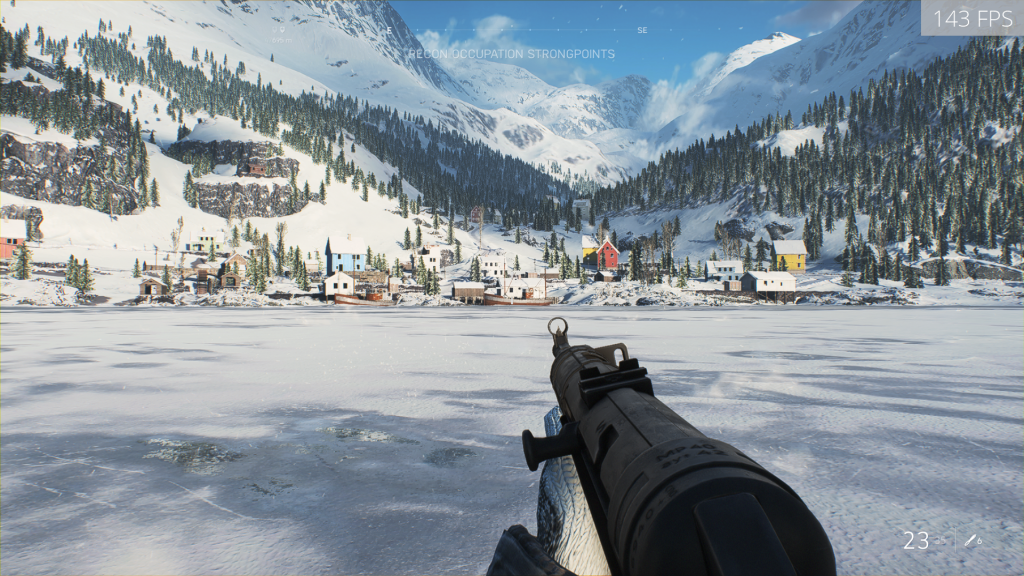 Using Origin’s in-game counter, I saw that the Helios 700 would skirt just below 144fps – the maximum refresh rate of the display – even with the fans covered and everything on auto. Overclocking and having the fans on permanently would see it clear 144fps all the time.

If you’ve been following the development of Nvidia ray tracing, then you’ll know that DLSS (deep-learning super sampling) – the advanced anti-aliasing feature that can counteract the ray tracing-related frame rate drop – can’t currently be enabled on Full HD displays linked to an RTX 2080 graphics card.

When all this is said and done, performance of Battlefield 5 on the Helios 700 with DXR on is among the best we’ve seen on a gaming laptop. Even though there was a good 10-20fps drop with those realistic reflections turned on, Battlefield 5 was still smooth as parachute silk, and the spectacle of seeing the exploded insta-corpses of Wehrmacht soldiers reflected in the frozen puddles of Nordlys as they sailed by was super satisfying.

I also ran PCMark 10 (general performance benchmark), Geekbench 4 (CPU stress test), 3DMark: Fire Strike (GPU stress test), and CrystalDiskMark (which tests the read and write speeds of SSDs and hard drives) to get a sense of how the Helios 700 will fare for typical PC work.

As you might expect from a laptop with an eight-core Intel Core i9 processor running the show, the Helios 700 smashed it right out of the park.

We’ve already seen from the gaming benchmark results that the Helios 700 beats both of these laptops hands-down – average frame rates I recorded when playing Shadow of the Tomb Raider, Dirt Rally, and Ghost Recon: Wildlands on the Helios 700 exceed what we saw on the ROG GX502 and Blade 15:

Granted, it’s a little unfair to compare the Helios 700 to laptops with a less powerful processor and graphics card. It would be fairer to see how these compared to an equivalent Helios 700. There are models with the same CPU and GPU, and if we happen to get one of those in, I’ll re-run those benchmarks.

Also, both the GX502 and the Blade 15 are much slimmer and lighter devices, which are intended to be used as work laptops as well as gaming machines – so it’s a bit like comparing people carriers with motorbikes.

The closest laptop we’ve reviewed recently that could be directly compared with the Acer Predator Helios 700 is the Asus ROG G703GX, another huge desktop replacement laptop with an RTX 2080, and a price tag in the region of £4500.

On this, we recorded an average frame rate of 133fps on Shadow of the Tomb Raider – higher than the 110fps (default) and 120fps (extreme) results I got here. Geekbench 4 results were also in a similar ballpark (5,736, 25,789). Unfortunately, as review processes here weren’t as closely aligned as those earlier in the year, these are the only two performance data points we have to compare.

Running CrystalDiskMark gave me the following read and write results for the Helios 700’s SSD (unspecified Intel solid state drives in a RAID 0 set up) and HDD (a 2TB 5400rpm Seagate ST2000LM007):

Those SSD speeds are great, and mean any games stored on the C: drive will benefit from fast internal load times – you won’t be stuck for ages looking at area-loading screens. The HDD speeds are far slower, but that’s also par for the course – it’s common for gaming PCs and laptops to feature fast, small (and expensive) SSDs for storing Windows and game files, and bigger, slower (and much cheaper) HDDs for other, less critical files to live on. This means you can reserve that precious SSD space for game files.

It should go without saying the Helios 700 is more than powerful enough for office work and basic photo work, although as we’ll see in the upcoming display and battery performance sections, you won’t want to be doing much of either of those things on this laptop.