What is the Acer Predator Helios 500?

Acer’s Predator gaming range usually ticks most of our boxes, offering solid specs and premium performance without completely smashing the bank. Heading up the family is the beefy Acer Predator Helios 500, a gaming laptop that can be bagged with a Core i7 or Core i9 chipset and Nvidia’s GeForce GTX 1070 GPU. You can overclock with the flick of a virtual switch and there’s a meaty dual AeroBlade cooling system to keep the whole thing from combusting. You can even bag it with a 4K display, for ultra-crisp visuals. 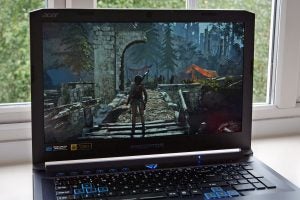 So is the Acer Predator Helios 500 a serious contender for one of the best top-end gaming laptops of the year?

First up, if you’re after a machine to take on the road day after day, you might want to have a browse of some other gaming laptops. The Helios 500 is an absolute monster, weighing just over 4kg. Seriously, this thing could be used to defend yourself against grizzly bear attacks.

Factor in the weighty power adapter, which could probably also be used to fend off that second bear, and you’ve got quite a package to cart around.

The likes of the Gigabiye Aorus X5 offer a far more portable experience – that particular gaming machine weighs an almost sprightly 2.5kg. Meanwhile the Gigabyte Aero 14 is even lighter at under 2kg, so you needn’t bust your back while humping it around. 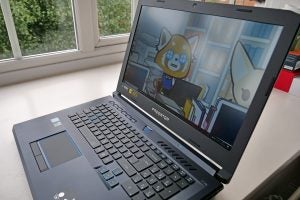 Of course, if you’re all about beefy performance without running the risk of throttling, then you’ll need to take a hit on portability. The Helios 500 is built like a brick portaloo because it packs some serious specs, and needs a serious cooling system to deal with it. As such, it’s best left on a desk and only carried when needed. And if you do need to take it out and about, don’t bank on fitting the Predator inside of a standard backpack. It’s not only hefty, it’s rather chunky too.

Still, I have no complaints at all when it comes to build quality. The Helios 500 sports a solid plastic chassis, with no hint of troublesome flex or weakness. I wouldn’t recommend dropping it of course, but this laptop can suck up bumps and bangs with a smile.

One area where gaming laptops really can’t skimp is the connectivity. Thankfully Acer has lined the Predator Helios 500 with plenty of ports to hook up any drives, displays and peripherals you want. A trio of Type-A USB 3.0 ports are joined by dual Thunderbolts, so you can stick in all of your external bits without running out of space. Dedicated HDMI and DisplayPort connections are also located around the rear. And of course there’s Ethernet, guaranteeing a stutter-free online connection. 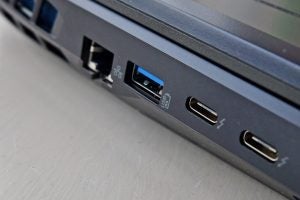 Considering the size of this monster, it’s no surprise that the Helios serves up a fully-stocked keyboard. Pretty much everything you could possibly need is on offer, including a dedicated keypad and five shortcut buttons, which can be customised with up to three different settings.

All of the keys are a good size, even the cursor keys (which is frankly so rare that it’s well worth celebrating). That said, there’s no spacing between the standard keyboard and that keypad, so occasionally I missed when aiming for the return key, hitting the numbers instead. 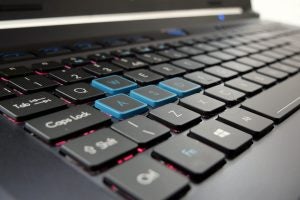 The Helios 500’s keyboard has a firm finish, and it’s responsive enough to use for fast-paced action titles. It’s also a comfortable way to smash out essays or emails in your downtime, if you’re going to use the Predator for anything other than sniping fools in the face.

While many gaming laptops can practically blind you with their dazzling backlighting, this Helios offers some surprisingly subtle LED lights to illuminate the keyboard. The board is split into four separate zones, each of which can be lit up by a specific colour. This is easily configured using Acer’s pre-installed PredatorSense app, which is also used to setup the five shortcut buttons. Even on maximum brightness, the backlighting is rather weak (although still just about strong enough to highlight each key in complete darkness).

The touchpad can also be illuminated with an LED strip defining the border. It’s obviously far from ideal for anything beyond simple games, with patchy responsiveness when using the keyboard at the same time. However, it’s perfectly smooth and responsive for everything else, and I love that Acer has included dedicated mouse buttons, positioned beneath the pad. 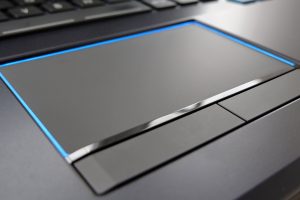 However, one key omission is some kind of fingerprint sensor. The Helios 500 doesn’t support Windows Hello, so you’re stuck with entering a password every time you unlock the laptop.

You get a choice between a Full HD and 4K resolution 17.3-inch display when you order a Helios 500, depending on the level of graphics you’re after. Our review model was the FHD version and I found the visuals were still crisp and detailed enough for gaming, or kicking back with a flick when your fingers get tired.

One of the benefits of the Full HD model, beyond the lower cost, is the 144Hz refresh rate. This delivers a pleasingly smooth experience, which is perfectly suited to racing games, shooters and any other fast-paced titles.

Colour accuracy is very respectable, if not quite perfect. Putting it through the Trusted Reviews benchmarking process, I found that 97% of the sRGB gamut and 75% of AdobeRGB were reproduced – a result that more or less matches rivals such as the Aorus X5 and beats the Razer Blade 15 cleanly. 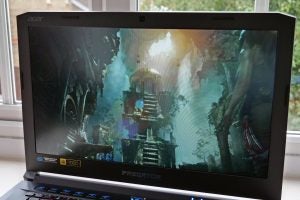 On the default settings and maximum brightness you can expect a cooler colour temperature around 7700k, although this can be tweaked to your own preferences in the display settings. The 632:1 contrast is a little disappointing, when most rivals stretch closer to 1000:1.

One minor complaint is the Helios 500’s lack of brightness. Boost it to the max levels and the Predator just about hits 300nits, which is fine for indoor gaming. However, try playing anything outdoors on a sunny day, and you’ll be squinting up a storm. Even the matte finish of that mighty panel can’t help, especially for darker scenes in the likes of Rise of the Tomb Raider.

Sound is blasted primarily from stereo speakers, positioned along either edge of the laptop. And as you’d probably hope from such a beefcake laptop, the audio pumped out is rather meaty.

The Helios 500 produces some powerful full-bodied noise on top volume, while the quality remains strong. I happily blasted through single player games without bothering to slap on my headphones, although a proper surround sound headset is of course still essential for online matches. 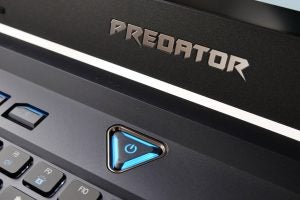 While you have the option of upgrading to a Core i9 chipset for next-gen performance, our Helios 500 review model came with a more modest Core i7-8750H chipset. This was backed by 16GB of RAM.

This base model still delivered strong performance, even if it lagged a little behind some premium rivals. In our standard PCMark and Geekbench tests, the Helios 500 couldn’t quite touch the Gigabyte Aorus X5 or Asus ROG G703. However, the figures churned out still showed that this laptop is capable of great things.

Where the Predator really shows its claws is the graphics grunt. Nvidia’s GeForce GTX 1070 packs a real punch thanks to the excellent cooling system, which prevents any throttling even during intense and prolonged gaming sessions.

On standard performance settings, the Helios 500 delivered the following scores in 3DMark:

I found that Rise of the Tomb Raider ran perfectly on top detail levels in this mode. However, you can also overclock the GPU using Acer’s PredatorSense app when you really want to test the laptop’s limits. This is very simple to use and includes full fan control and temperature monitoring, presented in a clear and concise fashion. The Helios 500 is therefore suited to less techy gamers who want to get the most out of their machine, but don’t want to get bogged down in some of the more complicated and riskier aspects of overclocking. 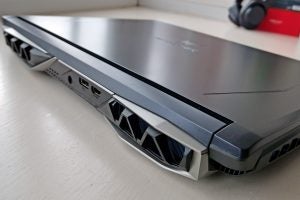 With the GPU fired up to ‘turbo’ setting, and 144Hz mode activated in Rise of the Tomb Raider, I found that the results were simply stunning. In the Mountain Peak test, the Helios managed an average performance of 134fps. Syria returned 104fps while the Geothermal Valley delivered 101fps, on par with what we saw when testing the same title on on max settings on the Gigabyte Aorus X5 and Asus ROG G703. Action set-pieces are handled with ease – no stutters, screen tearing or other issues to report.

All the while, those dual AeroBlade fans keep the air circulating surprisingly quietly. The hot air blasted out of the Predator is occasionally intense enough to roast marshmallows, so you’ll want to keep those vents clear at all times, but I wasn’t concerned about the machine itself overheating at any point. And as mentioned, you can monitor the laptop’s temperature via Acer’s app.

Still don’t think that’s enough power for you? You’ve also the option of an Acer Predator Helios 500 with a stonking i9-8950HK CPU. Its Geekbench 4 multi-core score comes in at a very impressive 21,283, which is substantially better than i7 Predator Helios 500. How does it compare in terms of gaming performance? There’s admittedly not a sizable difference here, with our benchmark results for Rise of the Tomb Raider sometimes coming in even lower than they did for the i5 Predator Helios 500.

This isn’t a massive shock. The processor doesn’t have a huge impact on frame rates these days, especially when compared to the GPU. That said, the i9 model is still a worthwhile option if you frequently play processor-intensive titles such as Warhammer and Civiliaztion, with loading times noticeably slashed.

SSD speeds, meanwhile, are rather disappointing. CrystalDiskMark recorded read speeds of 523Mbps and write speeds of 482Mbps, which falls behind most gaming rivals.

Longevity has never been a strength for gaming laptops. Pull out the plug and you’re generally lucky to get three hours of play time before the massive batteries are fully drained – not too surprising with all that powerful tech and cooling systems to keep running.

Load up any kind of demanding title and the Helios 500 tends to die in a little under two hours. Quite a poor result, although as previously mentioned, this machine was really designed to sit on a desk and only occasionally hit the road. 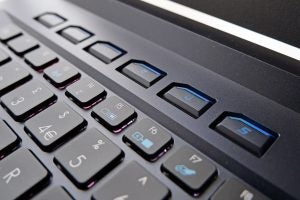 In the standard Trusted Reviews benchmarking, which simply involves looping basic tasks such as web browsing and video playback, the Helios 500 once again didn’t surprise. You get just over two hours of life from a full charge, before this mighty machine dies. When you consider that’s what you get with the Helios 500 even for fairly undemanding tasks, that’s pretty poor going.

Should I buy the Acer Predator Helios 500?

The Predator Helios 500 certainly ticks the boxes when it comes to performance. That GeForce GPU outperforms thanks to the overclocking and dependable cooling system, so you can play even super-demanding games with the detail levels boosted right up.

Of course, there are some drawbacks as well, especially when you stick the Helios side-by-side with the likes of Asus’ top-end ROG machines and that Aorus X5. The chunky, heavy chassis and poor battery life really hamper the portability, so you’ll want to keep this Predator on a desk whenever possible.