Here are the five things I learned when going hands on with the G1 at Acer’s New York launch event.

It’s a wheelie case. Early buyers of the Predator G1 will be a sent a custom-built wheelie case for their device, with a special Predator paintjob and fancy Predator wheels. Acer isn’t the first to offer a wheelie case with a gaming device; Asus’ liquid-cooled ROG GX700 is also supplied with its own, wheeled transportation. 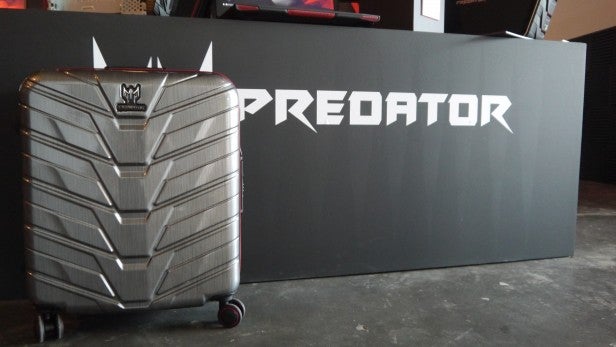 The models on display at the event were kitted out with top-specification components and were able to play Rise of the Tomb Raider in 2,560 x 1,080 resolution with no problems whatsoever. The Predator G1s also formed the backbone of Acer’s Oculus Rift VR demonstration, with the machines running various VR titles – including Everest and Mars 2030 – at VR-friendly frame rates.

Actual specifications will vary wildly by region and retailer, and when you consider that the device will launch in June this year, there’s every possibility that the graphics cards with which it will launch aren’t yet even public knowledge. Think Nvidia Pascal-based GTX 1080s.

However, Acer did make a big deal of the fact that some models of the Predator G1 will be available with Nvidia’s ridiculous, £1,000 Titan X graphics card – although quite how many of those make it to the UK remains to be seen. 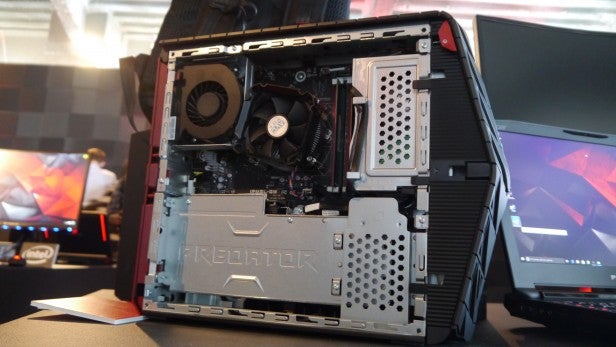 Processor-wise, the Predator 1 PCs will include sixth-generation Intel chips; most likely, top-end Core i7s. These will be supported by up to 64GB of DDR4 RAM, although expect closer to 16GB or 32GB in the UK.

I noted above that the Predator G1 has a 16-litre chassis. What this means in terms of dimensions is a PC that’s just 114mm wide, 348mm tall and 418mm long.

With such compact dimensions, plenty of work has been done on the inside to ensure the components fit. A riser ensures the graphics card can sit parallel to the motherboard; in a conventional PC, it would sit perpendicular. Space for additional storage and components looks limited, though.

The Acer’s closest rival is probably the Asus ROG G20CB, which we reviewed earlier this year. That PC, while flawed and overpriced, was significantly smaller than the Predator G1. As a result, I’m hopeful that performance compromises with the Predator G1 won’t be quite as huge as they were with the Asus system.

4. It has a hook for your headset

If home is where you hang your headset, then you’ll feel right at home with the Predator G1. 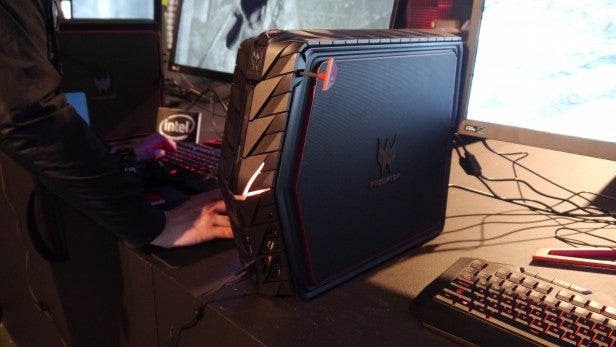 5. It’s not just form over function

Despite its armour-plated, almost armadillo-like design, the G1 is well stocked when it comes to ports and connectors.

It comes with a front-facing USB 3.0 port and a USB 3.1 Type-C port. This isn’t simply a bog-standard first-gen port, however; it’s a second-gen connector with a huge maximum data throughput of 10 GB/sec. External hard disks will benefit hugely from this, as will other high-speed external peripherals. 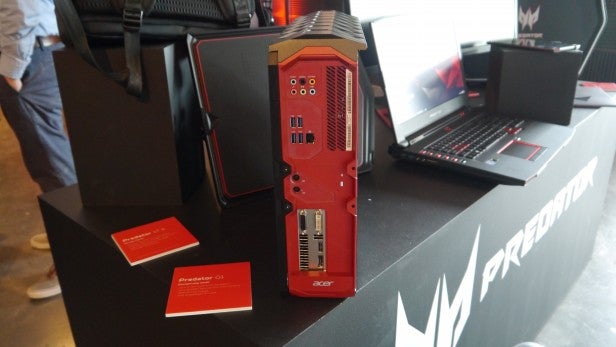 Also present is a front-mounted SD card reader for easy access. At the rear, four USB 3.0 ports, 7.1 audio and a Gigabit Ethernet port complete the roster of connectivity.

Storage options range from M.2 SSDs with capacities up to 512GB, plus mechanical hard disks with up to 4TB capacity will also be available. These options will vary from one retailer to the next and, inevitably, some high-street stores will pick perplexing builds with primary mechanical hard disks, so watch out for that.

With a starting price of around £1,100, this will be Acer’s most expensive gaming PC yet. However, it looks fantastic, and if UK retailers pick a decent set of specifications, it could be one of the firm’s most desirable PCs, too.