One feature that does purport to enliven your gaming is the “Quadio”, which Acer says provides a “virtual surround-sound experience”. While the setup is certainly loud, surround-sound this definitely is not. The extra outputs allow the Predator to achieve suitably cacophonous sound levels, but the sound itself isn’t any more nuanced or otherwise improved. 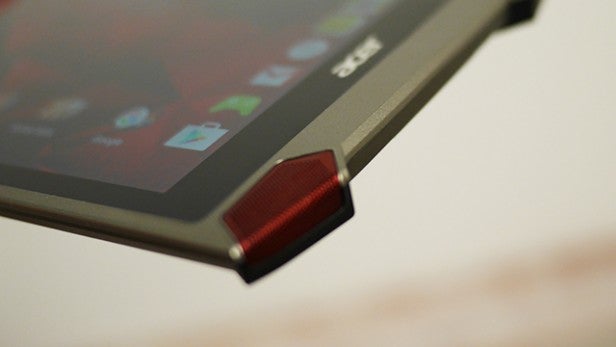 The Quadio enterprise is one that should end with the Predator. Multiple small speakers simply highlight the real issue with small speakers – there’s no bass. Although the Pixel C and iPad Pro manage to get some lower frequencies in their sound, smaller speakers will always struggle in terms of sub capabilities.

This is why it’s hard to be impressed by the Predator’s four-speaker setup. It doesn’t matter how many speakers Acer had included, with small tablet speakers you’re invariably talking about an almost complete lack of low-end. So in reality, Acer’s Quadio simply provides four ways to highlight this fact.

Still, the Predator has perfectly adequate sound for a tablet. Mid-range frequencies are clear and there were no major problems such as distortion at loud volume or sound glitches. Just don’t expect Quadio to revolutionise your tablet speaker experience, or make gaming any more immersive. It’s just loud – that’s all there is to it.

Acer hasn’t managed to outdo its rival, the Nvidia Shield K1, in the performance department – but it hasn’t missed the mark entirely either.

The Predator is powered by Intel’s Quad-core Atom x7-Z8700 1.6GHz processor, alongside an Intel HD Graphics Gen 8-LP GPU. There’s also 2GB of RAM and the choice of either 32GB or 64GB storage, plus the option to add a Micro SD card up to 128GB. 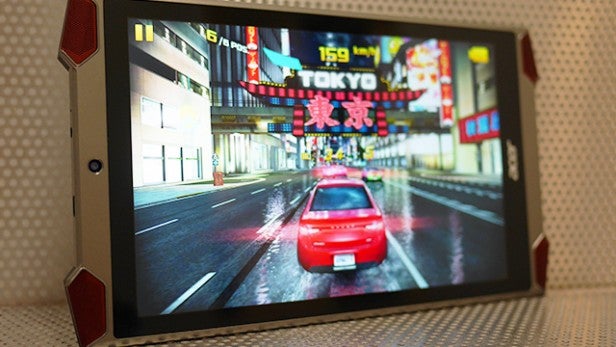 Acer’s choice of internals doesn’t beat the Shield Tablet, with its Tegra K1 processor, but the Predator will handle most – if not all – games easily. At the tablet-gaming level, Intel’s components are all you’ll really need.

In terms of benchmarking, the tablet scored 1,539 in the 3DMark Sling Shot test, earning the following commendation: “Can’t touch this! Not only is this device one of the most powerful available, but your score is also better than average.” It was a similar story in the Ice Storm Unlimited test, where the tablet scored 25,967, earning similarly high praise.

Elsewhere, the PCMark Work Performance test yielded a score of 5,167, accompanied by the following endorsement: “Good news! This is one of the most powerful devices around and everything seems to be working normally” 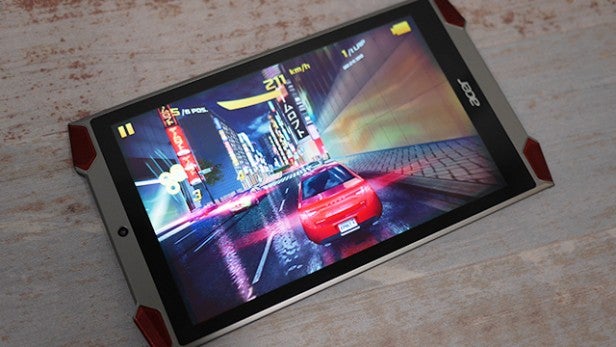 In the Geekbench tests, the Predator scored an impressive 1,046 in the single-core stakes, while the multi-core test resulted in a similarly notable 3,517. All this goes to reinforce the central point that tablet gamers will find the Predator to be more than satisfactory when it comes to running their favourite titles.

I found games ran smoothly and looked great, with the vibrant screen enhancing the graphical experience. Outside of gaming the Predator handles tasks well, and Android operates incredibly smoothly.

The tablet comes with Android 5.1 Lollipop. It would have been nice to see Android 6.0 Marshmallow on the Predator, especially considering the imminent arrival of the Pixel C, but in terms of other so-called gaming tablets, Lollipop is standard. I’m also pleased to see that Acer has steered clear of adding its own skin to the OS.

Unfortunately, the Predator comes with lots of preinstalled software. For those looking for a clean version of Android, the Predator isn’t going to make the cut. Excluding the standard Google apps that come with Android, the list of the pre-bundled apps includes Asphalt 8, Astro File Manager, Booking.com, Cloud Print, eBay, Dropbox, Games, Games Shop, OfficeSuite, Opera Max. Thankfully, most of these can be uninstalled. 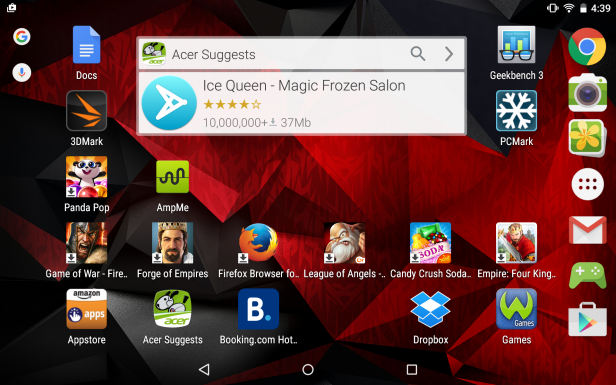 In addition to all of the above, swiping right from the homescreen when first booting up the device reveals an entire screen filled with game and app icons that are yet to be downloaded, but which Acer obviously feels you’ll enjoy. Tapping one of these icons takes you to the Google Play Store, from where you can download the program.

Part of the fun of getting a new computer or tablet is customising it with your preferred apps, layout and configurations. Having to delete all the stuff you don’t want before you can start to set it up isn’t a deal-breaker by any means – otherwise, most devices would be off the table – but it would help if it were kept to a minimum. Acer simply hasn’t managed this. 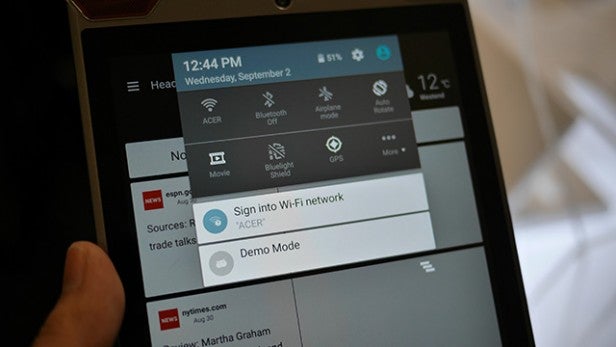 Having said that, the Iconia Suite of apps – with names starting with “EZ” – can be quite useful. This is especially true “EZ Tasking” multitasking tool, which offers a fairly simple and effective way of running multiple apps side by side.

EZ Snap makes it simple to capture screenshots using a three-finger technique, and EZ WakeUp allows you to wake the device and launch a specific app with only a single five-finger sweep of the screen. The various Iconia apps work well and actually add to the usability of the Predator, rather than detract from it.