What is the Acer Predator 8?

There’s no shortage of choice when it comes to Android tablets – which is a good thing. In terms of reviews, however, these tablets pose somewhat of a conundrum. What can I tell you about Acer’s Predator 8 tablet aside from the fact that it’s basically another screen with Android on it?

Acer has tried to differentiate its latest offering, the Predator 8, by marketing it as the “ultimate gaming tablet”. This basically means that this particular 8-inch screen with Android on it includes vibration feedback and larger than average speakers. So large, in fact, that Acer claims that the Predator 8 is the loudest tablet on the planet.

So are the extra features and novel design enough to justify this tablet’s existence in an increasingly cramped market? Has Acer managed to outdo rival gaming tablets such as the Nvidia Shield K1? And can the Predator, with its £200 price tag and premium feel, convince consumers to part with their cash – especially since the forthcoming Google Pixel C – touted by this website as the best Android tablet yet – is on the horizon? 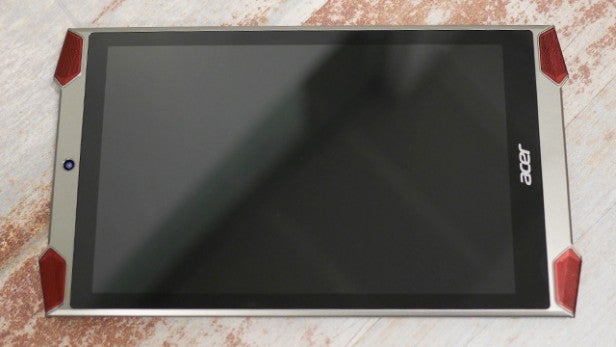 There is a possibility that this tablet will either fail or succeed at the very first hurdle – which is design. Depending on your taste, you’ll either love it or loathe it. It’s certainly distinctive and there’s little chance you’ll mistake Acer’s device for your old Samsung Tab.

The red, silver and black case is mainly made from plastic, and is moulded somewhat, shall we say, aggressively – it’s all hard lines and angles. There’s a sheet-metal finish applied to the back and along the front edges of the device, which lends the Predator a high-end feel. The colour scheme is bold without being garish. 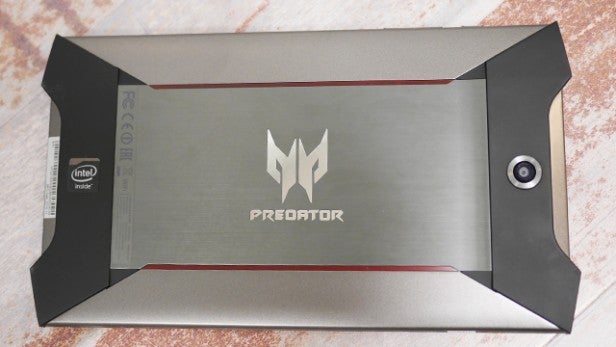 The four front-facing speakers that provide the “audiodacious” sound – Acer’s word, not mine – jut out from each corner of the tablet in suitably threatening style.

Console gamers used to vibrating controllers won’t be bowled over by the feature, but it’s a nice addition for any tablet owner looking to venture outside Candy Crush into games that merit a little physical feedback.

The overall case design isn’t as offensive as most would have you believe. It looks menacing and verges on tacky, but it feels somewhat refined. In truth, the grey, deep red, and black make for a fairly muted colour scheme, and the Predator is sturdy and well built. It’s also a fairly light and thin tablet, measuring 8.6mm thick and weighing around 350g. 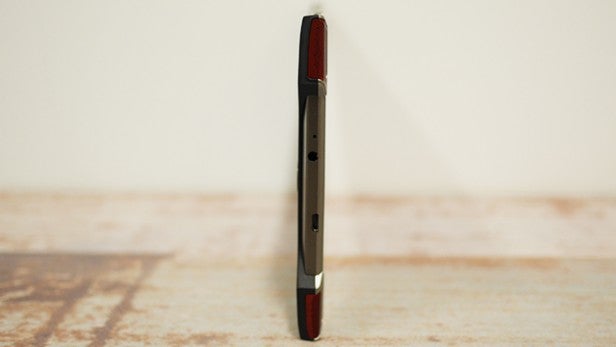 There’s no doubt this is a genuinely impressive feature for a tablet. But, when I discovered that the Predator didn’t come with a QHD screen – unlike the Samsung Galaxy Tab S 8.4 – I was initially disappointed. After all, this is a self-proclaimed gaming tablet – surely one of the main considerations for gamers is how good the game will look? 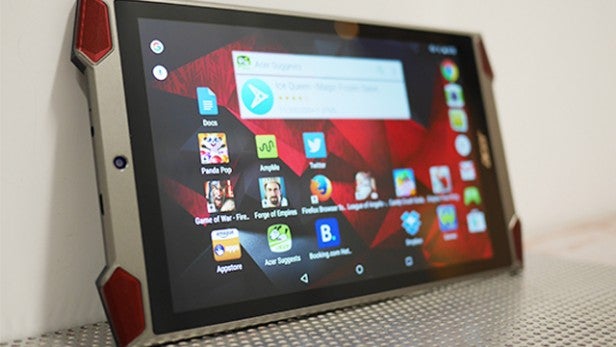 Having used Acer’s device, however, I can say that you won’t really notice the lack of QHD. And much of this is down to the Predator’s vibrant display.

Colours really do “pop”. When turning on the device I was struck by how vibrant the screen was, and was also pleased to discover that I could tweak the display levels quickly with Acer’s built-in MediaMaster app. This is a good thing, since the ColorBlast technology that Acer is so keen to promote definitely encroaches upon oversaturated territory.

For an 8-inch screen the FHD resolution does the job, and although the lack of QHD isn’t great, Acer’s tablet does have the same resolution as the Nvidia Shield. Nothing appeared blurry or undefined, and the maximum brightness on the Predator is more than any human eye will ever require.

The vibrancy may put some off, but it’s easily tweaked – and with its striking colours it’s the one feature of the Predator that actually gets close to enhancing the gaming experience.