Equipped with an overclockable Intel Core i7-7820HK, 64GB of 2400MHz DDR4 memory and a pair of 8GB Nvidia GeForce GTX 1080s in SLI mode, this is one of the most powerful gaming laptops on the planet. You can run it in three different modes – Normal, Faster and Turbo – although when you’re plugged in there’s little point in dropping your performance settings unless you wish to save energy.

CPU performance is beyond reproach. Not much gets near the 21 X aside from the  Asus ROG GX800VH, whose liquid cooling allows it to overclock all the way up to 4.8GHz. In Geekbench 4, it managed a single-core score of 5420 and a multi-core score of 18,499, while in CineBench R15 it managed a maximum score of 820, which puts it in desktop PC territory.

In gaming bechmarks, hooked up to a 4K monitor at maximum presets, it managed 78fps in Hitman, 81fps in Rise of the Tomb Raider, and 44fps in Ghost Recon: Wildlands. You might notice that these scores aren’t dramatically higher than a single GTX 1080. This is a pitfall of having multiple graphics cards: many games simply don’t support it properly and manage only modest performance gains, instead of the double frame rates you might expect.

There are other problems as well. You’ll occasionally run into a phenomenon known as ‘micro stuttering’, where the two graphics cards aren’t working completely in sync. 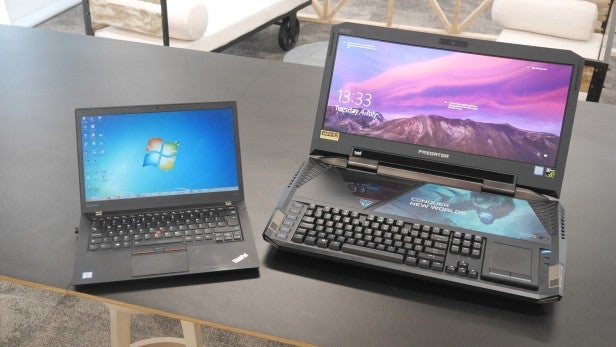 The good news is that if you’re after ultra-high scores in synthetic benchmarks, SLI works very well indeed. In 3DMark: Fire Strike Ultra, it managed a score of 9362, which is much higher than a single GTX 1080 score of around 5016.

In comparison with the Asus ROG GX800VH, the Predator 21 X manages very similar gaming scores but falls away in the CPU tests due to its lower clock speeds. But what it might lack in absolute raw power it gains back completely in terms of thermals and noise. The ingenious five-fan setup has two intake vents on the front with a fan each, with three further fans for the CPU and two GPUs. The heat is then dissipated out of the back and sides of the machine. Despite the number of fans, both temperatures (85 degrees Celsius for the CPU under load) and GPUs (70 degrees Celsius at a sustained 1974MHz) and noise were seriously low. There are big desktop PCs that make more noise than the Predator 21 X, which is genuinely amazing. 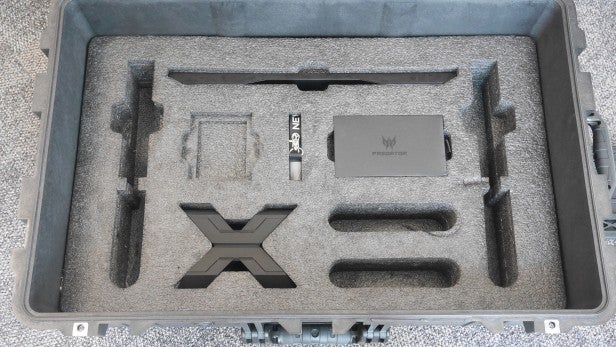 If you turn the fans all the way up – if you live in a hotter country than the UK and don’t have air conditioning, they get crazy loud. But I can’t imagine many circumstances where this would actually happen as there’s lots of headroom for higher speeds without super-high noise levels. The default fan profiles work very well and I didn’t feel the need to tinker with them.

My only slight gripe is that, unlike the Asus ROG GX800VH, there’s no custom overclocking. This means neither in Acer’s PredatorSense software nor in the BIOS will you be able to try out your own clock speeds and voltages. This is understandable given the limits of air cooling, but it would have been a fun addition nonetheless. Given the temperatures I’ve recorded, I’m sure this machine can go further.

The pair of SSDs in RAID0 add up to 1TB of storage, and manage supremely rapid performance, clocking 3405MB/sec read speeds and 2887MB/sec write speeds – just a whisker behind the ROG GX800VH.

The Predator 21 X will, at best, last around 1hr 20mins without its pair of power bricks. Under gaming load, expect less than half an hour. The battery feels more like a power-cut fail-safe than an actual practical addition. And, frankly, that’s fair enough.

Should I buy the Acer Predator 21 X?

This is the standard question for the end of every review here on TrustedReviews, but it doesn’t really fit. Of course, the Predator 21 X is a totally frivolous purchase that most of us are unlikely to consider. It costs more than many road cars and would go a long way towards a deposit on a house, or cover a year of university tuition fees. It absolutely doesn’t offer value for money, no matter how amazing it is technically.

But it’s impressive, and if you get the chance to try it out at a gaming show – or see an eSports celebrity rocking one – you can be safe in the knowledge that this isn’t just a stunt; it’s a proper technical achievement.

If big laptops are on the way out, this is surely the ultimate send-off.