What is the Acer Predator 17?

Since Nvidia found a way to cram desktop PC specifications of its graphics chips into notebooks, gaming laptops have been enjoying something of a renaissance. Over the last couple of years, we’ve seen old laptop makers we’d long assumed retired from gaming rushing to get back into the market. The 2017 model of the Predator 17 is Acer’s second attempt at this.

This behemoth gaming notebook doesn’t radically rework Acer’s 2016 offering, featuring an identical design and screen, but the upgraded GPU and CPU options make it a solid improvement nonetheless. Sadly though, its slightly disappointing SSD performance means it remains a good, but not outstanding, gaming machine. 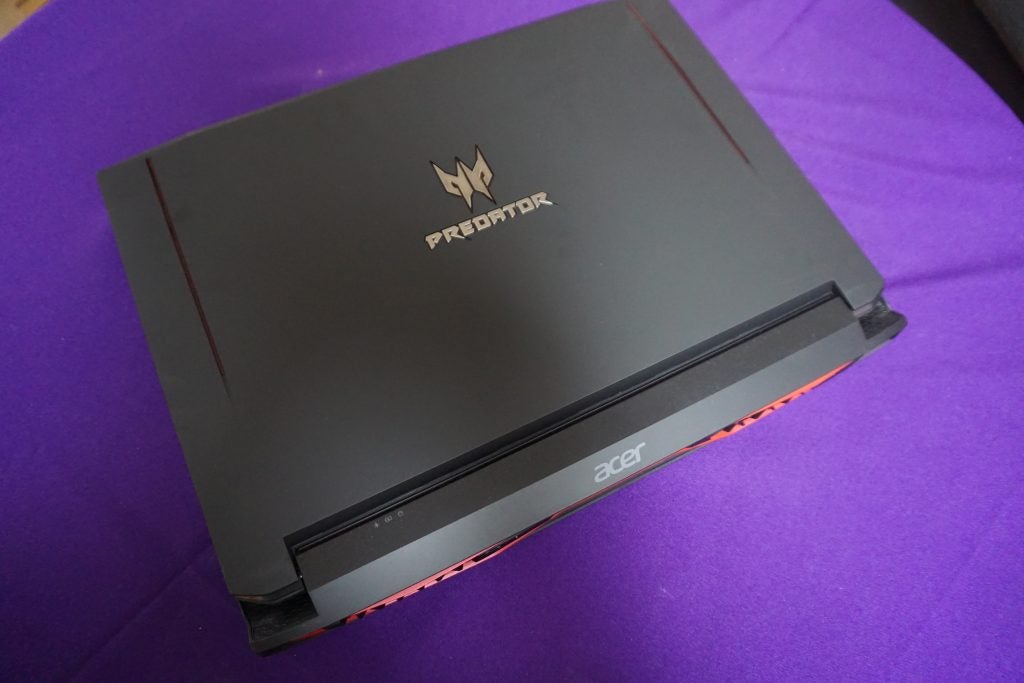 The Predator’s chassis remains as ostentatious as ever. Unlike competing gaming laptop makers, such as Gigabyte and HP, Acer has intentionally designed the Predator to be as over-the-top as possible, littering the 17.3-inch device with red flourishes and giant speaker grilles and fan vents. Outside of the Asus ROG G701VI, there are very few laptops that look quite so ready for hardcore gaming.

The unsubtle looks aren’t helped by the Predator’s 3.5kg weight and 40mm thickness, which are outright ridiculous, even by gaming laptop standards. Make no mistake, this is a backbreaker of a laptop that won’t fit into most standard bags and will likely spend the majority of its life on a desk.

Fortunately, Acer has done a reasonable job taking advantage of the Predator’s spacious chassis. Around its sides, you’ll find four USB 3 ports, a USB 3.1 Type-C connector, HDMI and DisplayPort outputs, and an SD card reader. This connectivity will meet most people’s needs and means the Predator has enough ports to support VR headsets like the Oculus Rift or HTC Vive.

I’m also a fan of the fact Acer’s bundled a Cooler Master-branded ‘Frost Core’ in the box. The Frost Core is an extra fan you can swap the Blu-ray drive out for to provide extra cooling. Considering how few games come in disc format these days, I’d recommend most buyers do the swap early on, especially if they plan to overclock the GPU. Of course, if you’re a regular Blu-ray watcher then you can happily keep the disc drive in play.

The ‘SoundPound’ (yes, really) 4.2 speaker system is another welcome addition. The setup combines four speakers and two subwoofers and, though not a replacement for a dedicated sound system, offers solid audio that’s easily loud enough to drown out the sound of the laptop’s cooling fans.

Build quality is the only area where the Predator feels perhaps a little compromised. The chassis is generally solid, but the screen hinge noticeably flexes if you put a little pressure on. The wrist rest surrounding the keyboard also feels slightly cheap, and flexes when met with heavy typing. Nothing major, but worth pointing out all the same. 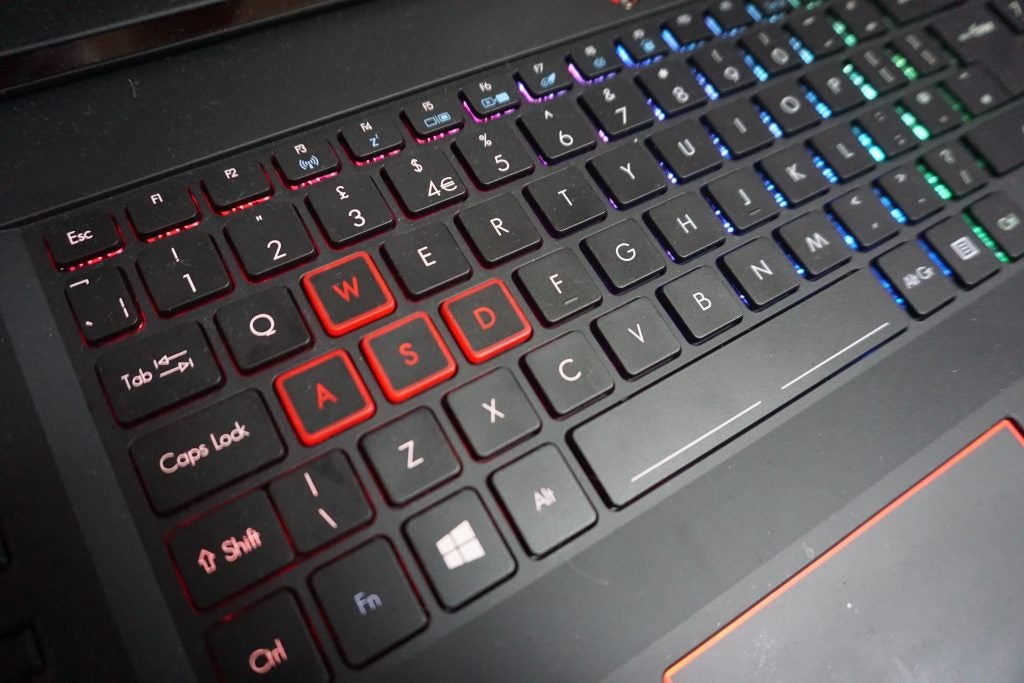 The keyboard is otherwise pretty good. The fully backlit, RGB main keyboard has five programmable macro keys along its sides. FPS gamers will also be happy to know the keyboard is programmable, thanks to the inclusion of Acer’s PredatorSense software, which lets you create colour patterns to match specific games’ control schemes.

The keys aren’t fully mechanical, but it’s a cut above the keyboards seen on many competing devices, like the HP Omen 17. Offering decent travel, being well spaced and with a rapid action, the keyboard is ideal for both gaming and typing.

The trackpad remains unchanged from the 2016 Predator, which is no bad thing. Unlike Acer’s other 17-inch laptop, the Helios 300, the trackpad is suitably spacious and firm to the touch. The inclusion of dedicated left- and right-click keys is also a welcome addition that makes accidental button presses a rarity. 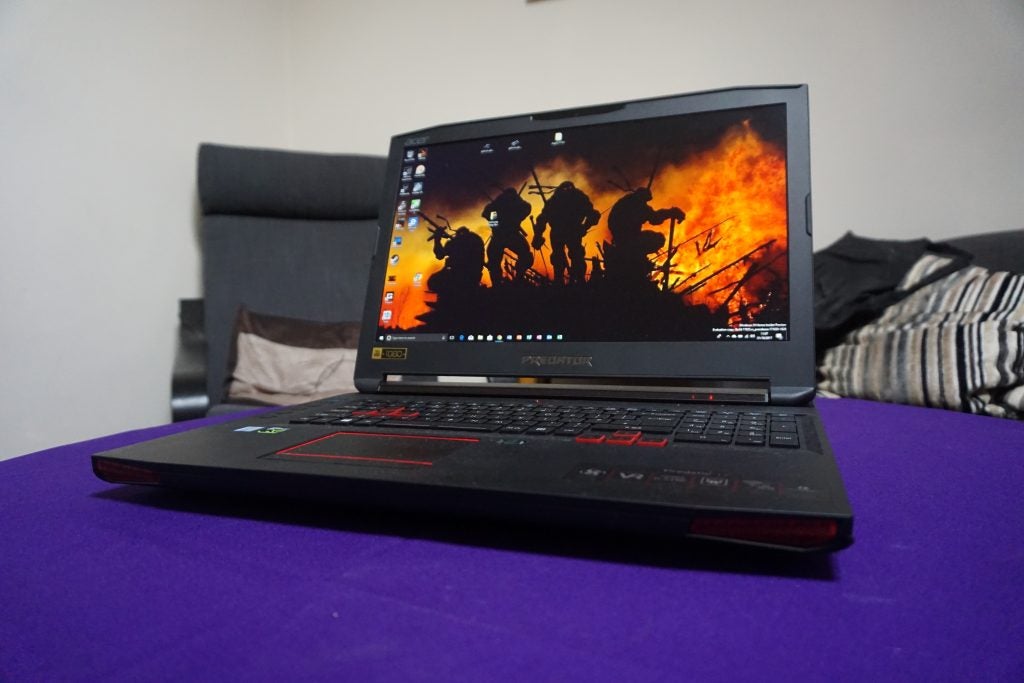 Some people may bemoan the lack of 1440p and 4K resolution options, but considering the screen’s size, the resolution is hardly a deal-breaker. I’d rather have the smoothness of G-Sync than a higher resolution display, personally. Of course, both would be even better but that’d push the price up somewhat.

The relatively deep 0.3 nits black levels and bright 344nits white levels give the Predator a usable 993:1 contrast ratio, which is par for the course in the gaming laptop space. The 7458K colour temperature is a little cool for my liking, but is also pretty standard for a gaming notebook in the Predator’s price bracket.

Artists will bemoan the screen’s 63.2% Adobe RGB and 72.9% DCI colour gamut coverage, but again, this is pretty normal for gaming notebooks, and the Predator’s 86.4% coverage of the bog-standard sRGB colour space is more than adequate.

All in all, these figures mean the screen looks great for Full HD gaming.