There are two main things you need to know about the Acer P6200S DLP projector. First, it claims to be capable of pumping out a huge maximum brightness of 5,000 lumens. Second, it uses a short-throw lens so you can enjoy huge images from a small throw distance.

For the home user this means it could be used to provide pictures for a super-big screen, or in rooms where it’s hard to remove all ambient light. For business users it opens up the potential for delivering presentations in large venues or, again, where ambient light is an issue. Unfortunately, that doesn’t mean it translates to a good viewing experience. 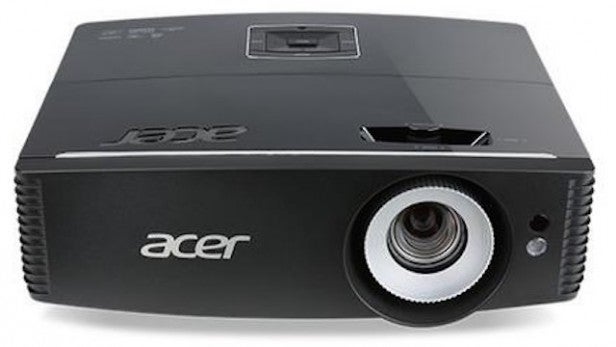 The P6200S is surprisingly attractive for a projector that on paper sounds like it’s designed to be a home cinema/business presentations cart horse.

Its larger-than-average 369mm (w) x 116mm (h) x 294mm (d) frame is refined by a gentle arc along its top and bottom sides. It has an attractive, glossy black finish, enhanced by some rather fetching silver trim along the front top edge and around the lens.

Build quality is promising too. The bodywork is, inevitably for a sub-£1,000 projector, only plastic. But the finish is luxurious and the plastic appears to be thick enough to withstand strong knocks. The projector’s weight also hints at quality innards. 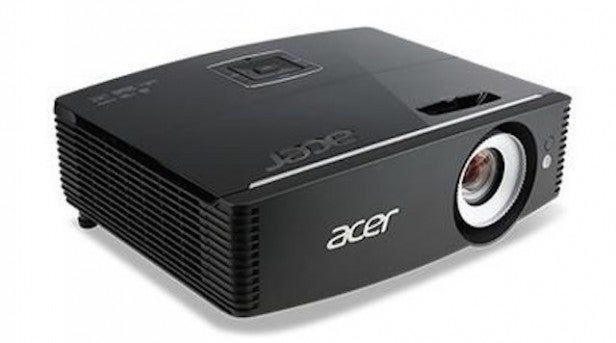 These innards seem to include a decent venting system. While the P6200S is far from the quietest projector around, it doesn’t run as overwhelmingly loudly – even in high brightness mode – as might have been expected from such an ultra-bright projector..

Acer’s design department has seemingly pushed the P6200S’s remote control out of mind, however. it’s one of the most unpleasant models I’ve seen. It feels horribly plasticky in the hand and sports an unhelpful button layout. There’s no backlighting for the buttons, either.

The P6200S’s connections include two HDMIs, so maybe it will be happy as a home entertainment device. Also on board are two VGA inputs, a VGA output, an RS-232 port for home control system integration, a component video input, and even LAN/HDBaseT ports – again to aid system integration.

You can also buy an optional wireless adapter that lets you project content from your Windows, Android and even iOS devices via an eDisplay app. 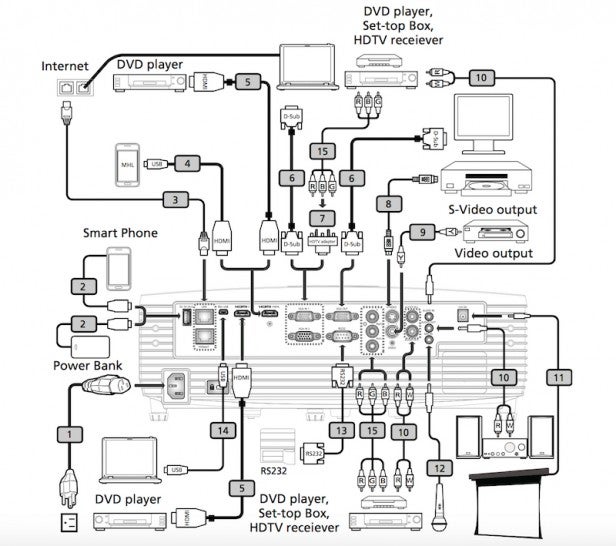 The P6200S uses a single-chip DLP projection system to deliver a 1,024 x 768 resolution. If you’re half-decent at maths then you’ll see that this resolution represents a 4:3 aspect ratio rather than a 16:9 or 16:10 “widescreen” aspect ratio.

This 4:3 situation would be surprising – and disappointing – in today’s world, even if the P6200S was pitched only as a presentations projector. But for potential home-cinema users it’s a crushing blow. It means that today’s 16:9 movie sources will only get to use a relatively small portion of the pixels available to the P6200S, potentially leading to an image that looks painfully low-res.

The P6200S’s headline-grabbing 5,000 lumens of light output is joined by a claimed contrast ratio of 20,000:1. This is actually high for the sub-£1,000 DLP market, and makes me hopeful that the brightness won’t come at the expense of a decent black level performance.

It’s also worth adding that on occasions when you don’t need all that brightness, the projector sports an Eco lamp setting that reduces the level and cuts power consumption by as much as 90%.

The P6200S supports 3D, provided you cough up extra for however many pairs of glasses you need, and carries a built-in speaker so you don’t have to hunt out an external sound source.

Finally, it ships with a well-made carry bag and a lens cap to keep it free from harm on its trips to different offices, or in and out of a cupboard at home.

The physical side of the P6200S’s setup is pretty straightforward. Simple zoom and focus rings are accessed through a window in the projector’s top panel, while tucked under the edge of this window is a simple but effective vertical image-shifting wheel. This should enable most installations to get the edges of the image perpendicular, without having to distort the image digitally using keystone correction.

The P6200S’s high brightness opens up the potential for either partnering the projector with an unusually big screen – 150 inches or more – or it sitting in a fairly bright room. The relatively short-throw lens makes it easier than normal to position the projector away from seating positions, too. 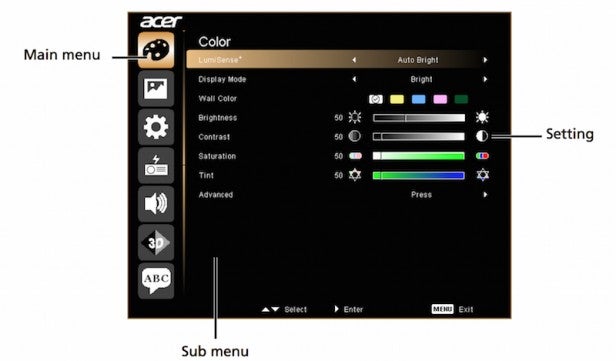 Acer also provides a decent set of picture presets for different types of environment. The PC/presentations modes are pretty self-explanatory, and can also potentially be used for watching video in a bright room.

For dark-room movie viewing I’d recommend Dynamic Black in the “Lumisense” suite of contrast options. This adjusts the light output in response to the requirements of the image, and manages to deliver a surprisingly credible black colour for such a bright projector.

Fine-tuning options are more limited than I’d expect to find in a projector that’s truly been designed for home cinema use – especially where colour management is concerned. This raises a question of just how “domesticated” the P6200S really is – although Acer is adamant that it can be a movie machine if you want it to be.