What is the Acer Nitro 5?

I’ve seen a raft of expensive gaming notebooks over the past few months, so it’s refreshing to see a machine with a price that doesn’t push into four figures.

The Acer Nitro 5 is a £899 notebook that enters the super-competitive mid-range market with an Nvidia 10-series graphics chip, an Intel Core i5 processor and a keen sense of style.

You wouldn’t know that this is a cheaper gaming notebook from its design. The lid is a smart slab of brushed metal, the hinge is finished with an attractive dark red shade, and the red theme continues to the keyboard and trackpad. 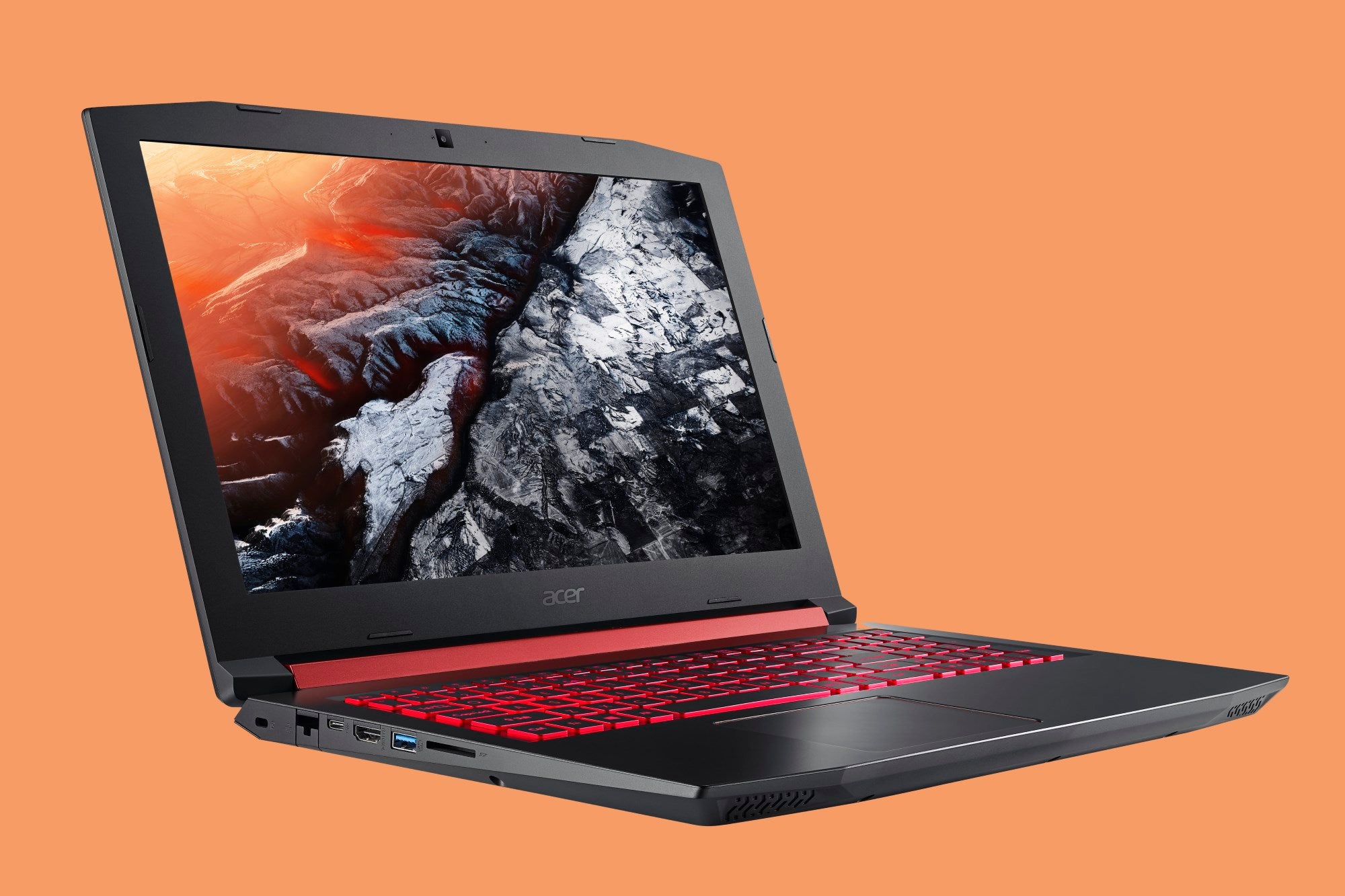 It looks good, and its design aesthetic is shared with its key rival: the £869 Asus ROG Strix GL553. That machine also had a mix of dark plastic with colourful highlights, and its rear showed off the familiar Asus ROG logo.

The two machines look similar, but the Acer is a little chunkier than the Asus. The Acer weighs 2.7kg and it’s 27mm thick from top to bottom, while the Asus was a couple of hundred grams lighter and a couple of millimetres slimmer.

Those figures see the Acer fall behind, but these are minor infringements – the extra weight or depth won’t be noticeable in everyday scenarios.

Build quality has similar, minor infractions. The Acer’s hinge doesn’t move quite as smoothly as another one of its rivals: the Dell Inspiron 15 7000 Gaming was far smoother and a little more solid, albeit a little more expensive, too. There’s noticeable flex in the Acer’s base panel and the plastic around the keyboard, which is something that the Nitro shares with the cheaper Asus.

Versatility, at least, is fine. The Acer has a USB 3.1 Type-C port, which the Dell didn’t offer, and it’s got a card reader and three USB ports.

A couple of small panels on the base can be used to access the hard disk and memory slots, although there’s no easy way to access the SSD or the cooling gear. The Nitro also doesn’t have a DisplayPort output or a DVD drive – with the latter included on the Asus notebook.

It’s a solid bill of health for a £899 laptop, but the Acer isn’t without its flaws – the Dell is slimmer and sturdier, and the Asus is lighter.

The Nitro 5 has a decent keyboard for  a laptop, but it’s disappointing when you drill down to its gaming attributes.

The scrabble-tile buttons are quiet and have a middling amount of travel, and the base beneath the keys is noticeably squidgy – so, beneath the finger, they’re similar to the Asus’ long keypress. 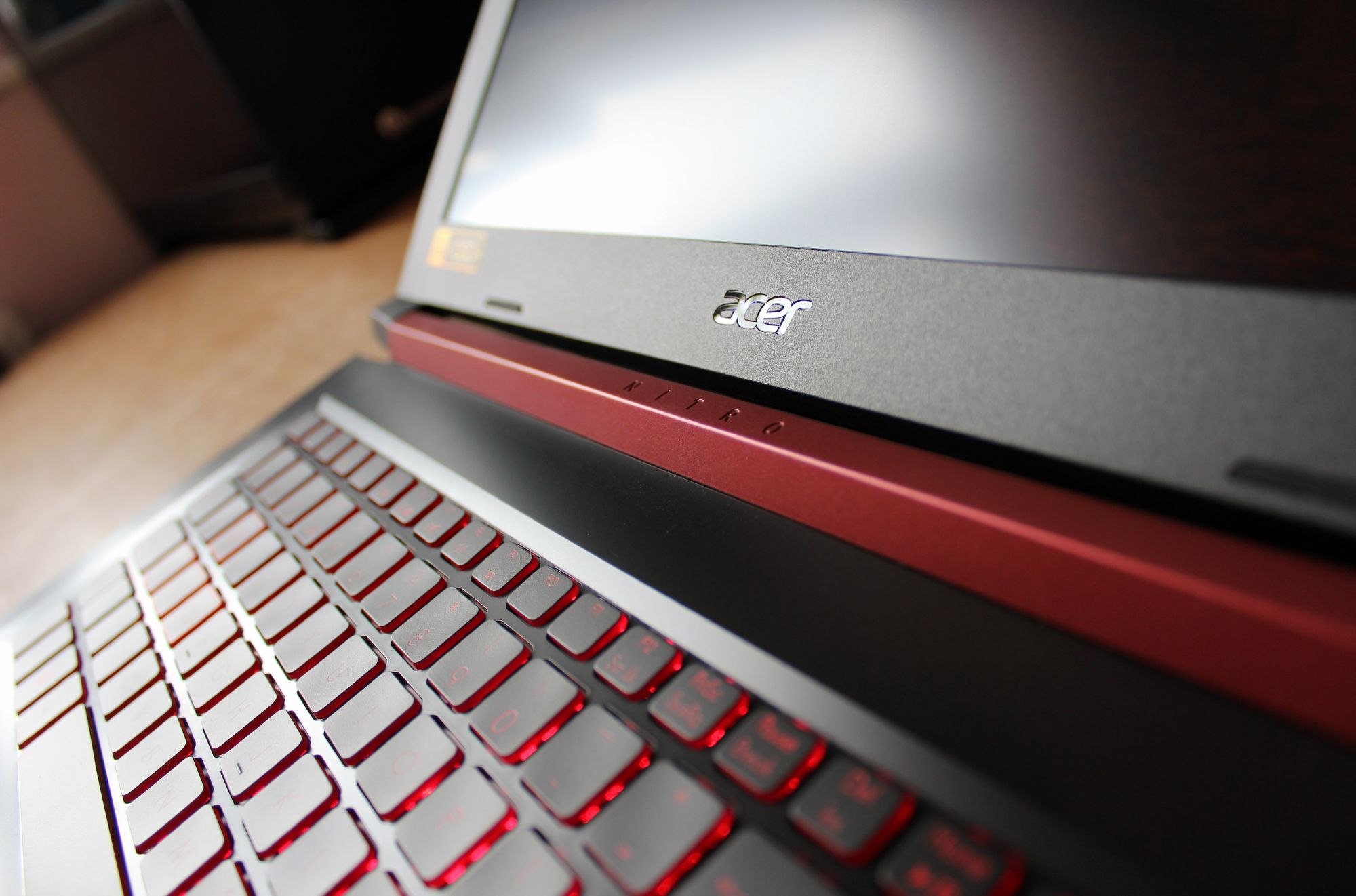 That makes the Acer’s buttons comfortable for typing, but that isn’t necessarily great for gaming – for frantic sessions I prefer a firmer base with more travel and noise. Those attributes provide a more substantial experience, which is why the keenest gamers prefer mechanical hardware.

The Acer’s layout can be occasionally odd, too. The WASD keys are highlighted but not reinforced, and the left-and-right cursor keys are deliberately narrowed. The Return button shares space with the Hash key, and the left-shift button is narrow and shares room with the left-slash key. Those could be problematic if you’re accidentally pressing the wrong buttons in the middle of a game.

The Nitro’s keyboard is soft, quiet and comfortable, which is great for typing but only mediocre for games. That’s acceptable for casual and mainstream gaming, but serious gamers and competitive types will want something with more rigidity.

The trackpad suffers similarly. The in-built buttons are soft, which for regular work will be quite nice but won’t be suitable for gaming. But I doubt many people will be doing proper gaming without a proper gaming mouse.

The Acer’s keyboard has a red backlight, but no RGB LEDs – which is something that the Asus does manage to fit into its budget. It doesn’t have software, either, which means you miss out on macro recording and gaming profiles.

Acer has installed a 1080p IPS panel into the Nitro 5, which is good at this price, but there’s no room in the budget for extras – don’t expect a high refresh rate or Nvidia G-Sync.

Don’t expect incredible levels of quality, either. The contrast level of 1,114:1 is good, but that figure is undermined by consistently poor colour reproduction. The Delta E of 5.18 is mediocre, and the colour temperature of 7,028K is on the chilly side. 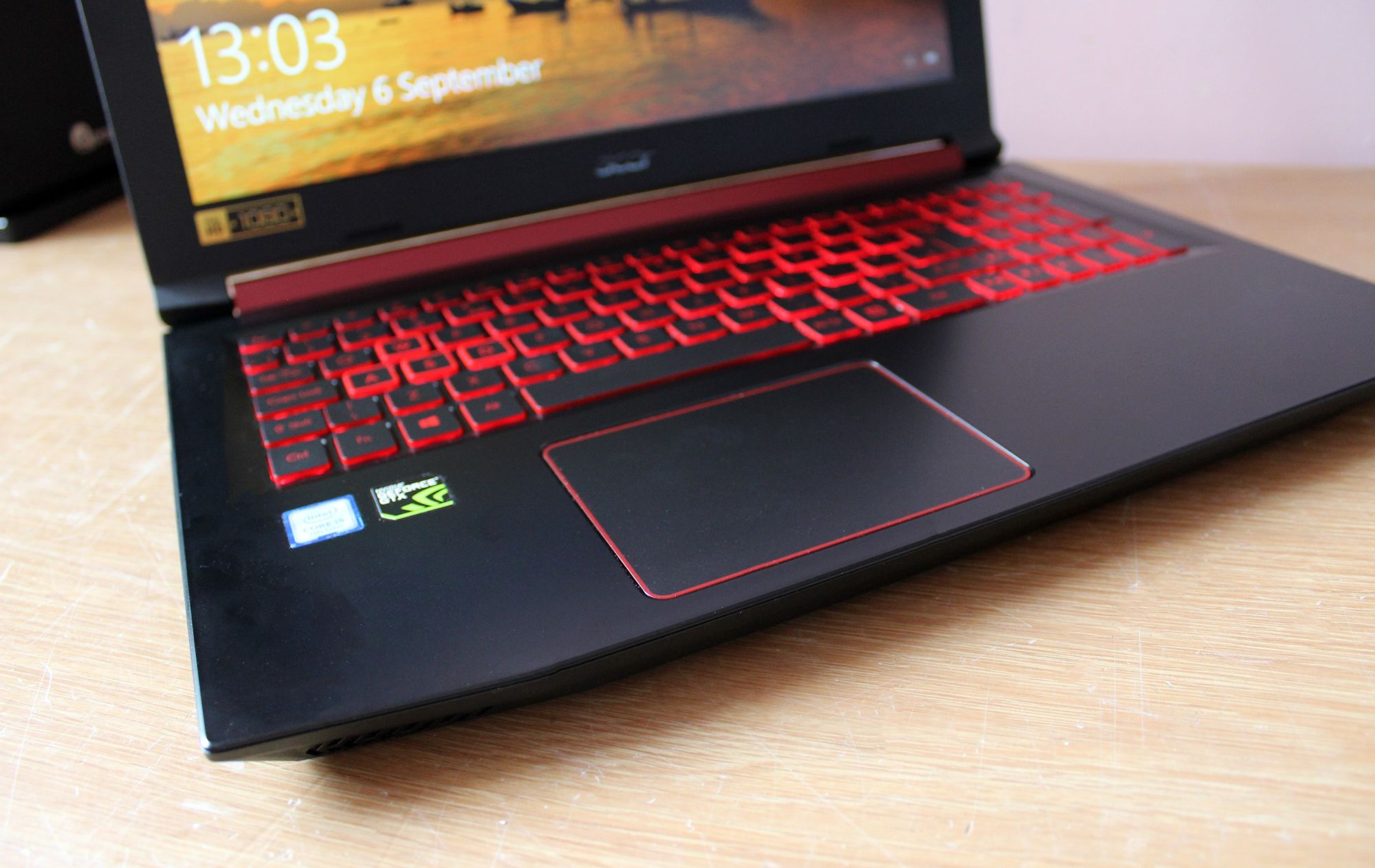 The worst colour-related issue is the Acer’s sRGB gamut coverage of just 59.1%. That’s poor, especially for an IPS panel, and closer examination reveals that the Acer’s screen can only fully reproduce blue shades. The Asus screen, meanwhile, served up 90% of the sRGB colour gamut alongside marginally better contrast.

The blue hue and chilly colour temperature means the panel has a pallid, washed-out feel. It’s not enough to disrupt gaming, but it’s definitely going to rob skin tones and other colours of their warmth.

The washed-out colours are paired with underwhelming uniformity, with the bottom edge losing around 20% of its brightness. Viewing angles are good, at least.

The contrast ratio ensures that this panel can cope with modern games, although it’s certainly not the best option if you prize warm, accurate colours – and it’s definitely not good enough for colour-sensitive work. If that’s important to you, then the Asus is a little better.

The speakers are similarly underwhelming, with solid vocals and high-end noises that are undermined by the usual laptop complaint of a cramped mid-range and a lack of bass. It’s nothing that I haven’t heard before.

The GTX 1050 will play most Triple-A games at High graphics settings on the Nitro’s 1080p screen. It ran through Tomb Raider’s high-quality benchmark with an average of 45fps, and handled its Very High settings at 34fps. In Shadow of Mordor it averaged 43fps. 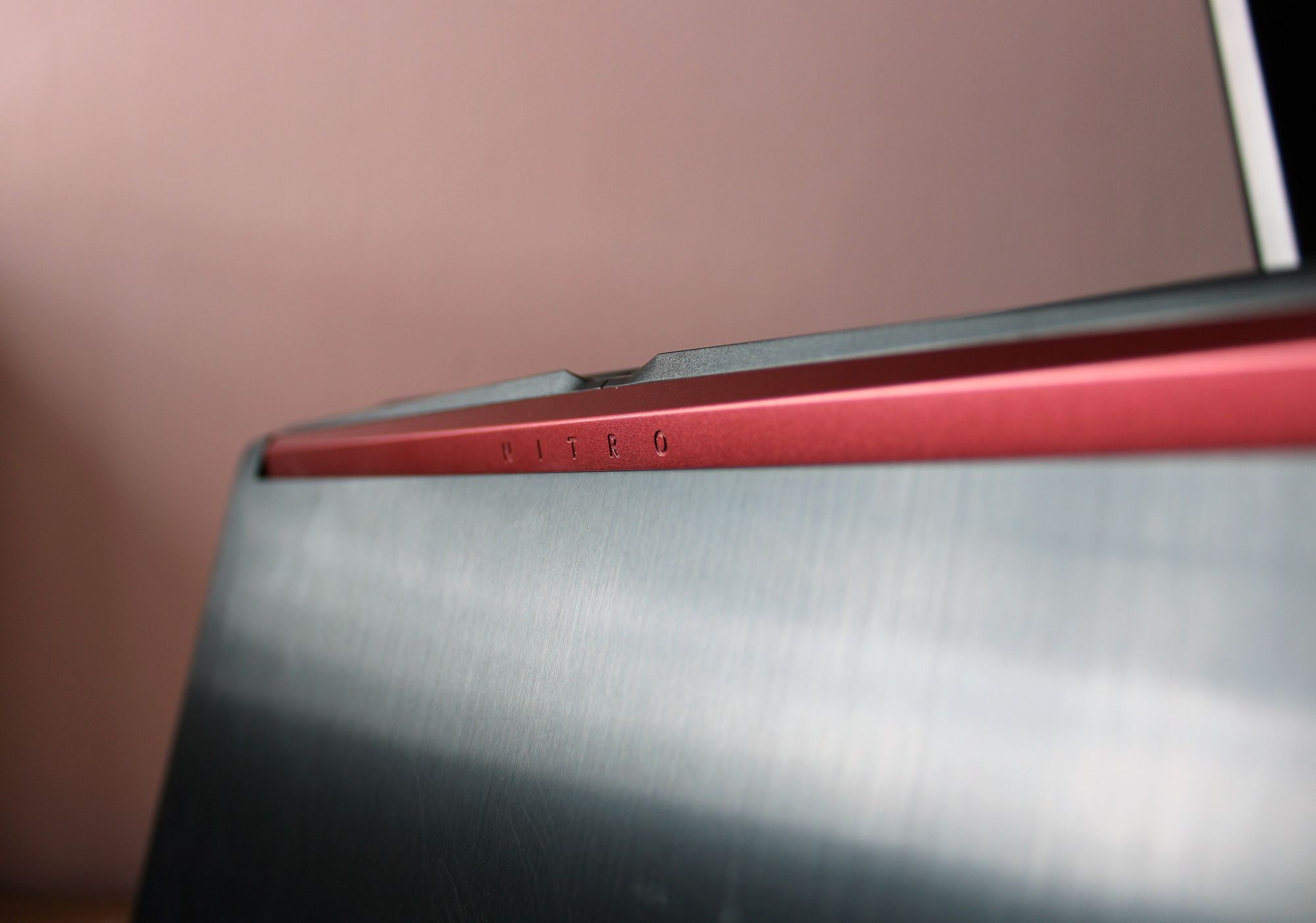 The Nitro 5 is powered by a Core i5-7300HQ processor, which is another mid-range component. It’s got four cores but no Hyper-Threading, and it runs at 2.5GHz. It’s the same chip as the Asus, but a step behind the Dell’s Core i7 silicon.

Benchmarks illustrate the gap between the chips. The Acer’s weaker single-core speed saw its Geekbench single-core result of 3658 fall behind the Dell by around 500 points and the Acer by about 300 points, and it was behind both machines in the multi-tasking test too –  3000 points behind in the Dell’s case.

The Acer has enough pace to handle games as well as video and photo editing, but the Nitro isn’t helped by some of its peripheral components. The SSD’s read and write speeds of 539MB/s and 424MB/s are entirely ordinary, and the 8GB of DDR4 memory is arranged in a single-channel configuration, so it’s always going to be slower than a pair of 4GB sticks.

The four-cell battery can’t compete with its rivals. The Acer’s power pack lasted for three hours and 38 minutes in the standard benchmark, which is par for the course on a gaming machine, and it then handled 90 minutes of intensive gaming with the screen at full brightness. It’s a few minutes short of the Asus’ figure, but it’s not even half of what the Dell can manage.

At least the Acer never presented any thermal issues. The Nitro remained quieter than most gaming notebooks through every benchmark and stress-test, and its peak CPU and GPU temperatures of 82°C and 59°C are no concern. The exterior remained cool, too.

Should I Buy the Acer Nitro 5?

The Acer’s GTX 1050 GPU and Core i5 processor are easily fast enough for 1080p gaming and general-purpose computing, but both of its rivals are quicker: the similarly-priced Asus is marginally faster, while the top-spec Dell is a larger step ahead, although you do pay for that. 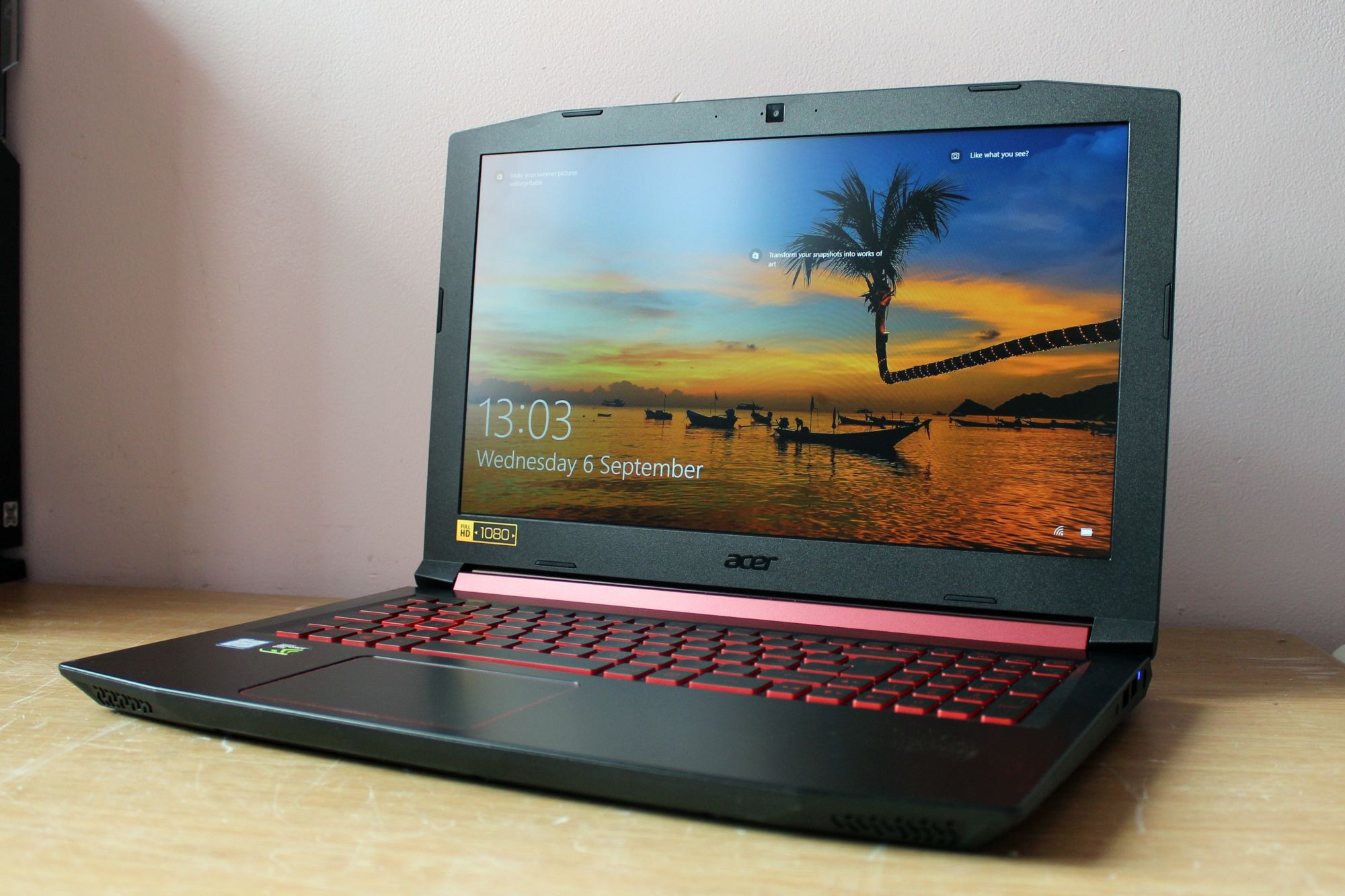 The Acer’s components sit inside a well-built, good-looking case that has a solid selection of ports.

Unfortunately, the lower price comes with a few issues. It’s nice to see an IPS screen, but it’s a bit cold and has poor sRGB coverage, while battery life is underwhelming.

The Asus and Dell machine’s don’t necessarily solve these common issues, but they both do sneak ahead of the Acer: the former laptop is a little cheaper and just as solid in most departments, while the pricier Dell is better-built and faster.

The Nitro 5 is a reasonable mid-range laptop, and while it doesn’t push the sub-£1000 gaming laptop category any further forward, it’s a sensible choice for someone looking for a portable powerhouse.