What is the Acer Liquid Jade?

Acer is better known for its computing hardware, but the Liquid Jade is nonetheless a formidable entry to the mid-range smartphone market.

It’s aimed at budget-conscious users who want a reliable Android handset that’ll handle daily business without much trouble. We’d say it does a good job.

The handset was first announced back in June last year, which means it’s getting on a bit now. However, it’s worth bearing in mind that, although it launched at £229, you can pick one up now for under £150 from select retailers.

The Acer Liquid Jade won’t make your mates green-eyed with envy, but it’s certainly a trusty smartphone that won’t break the bank.

The Acer Liquid Jade isn’t the most gorgeous handset on the mid-range market, but it gets a lot of things right.

The body of the phone is almost entirely black, save for a metal-trim edge – this gives the Liquid Jade a bit of much-needed character. The bezel is particularly narrow on either side of the 5-inch screen, which makes the display look rather large and impressive.

The top and bottom parts of the bezel are more pronounced however – about half an inch each, roughly. The bottom of the bezel hosts a silvery ‘Acer’ logo, while the top houses a small, circular speaker grille, a camera, and a notification light on the right-hand side. 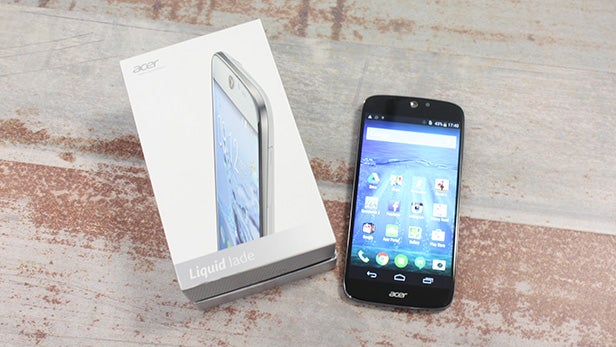 The handset is built from glossy plastic, which we weren’t so keen on. It makes the phone feel cheap, and the back picks up finger grease far too easily. Not one for fried-food enthusiasts, perhaps? The upside of the plastic chassis is that the phone is very light – 110g to be exact. The Motorola Moto G (2014) weighs 149g, by comparison.

The back of the phone is slightly curved, which sits well in the hand. The rear-facing camera protrudes, which we found to be a neat design choice for a budget smartphone.

The Micro USB port is on the base, and is open and accessible – no cover flaps here. There’s a headphone jack on the top that sits next to the power button. The dual SIM card slot – a nice addition – and microSD slot are on the left of the device, and the volume rocker is on the upper right-hand side.

Acer sells the Liquid Jade in four colours – black, grey, green, and white. We tried the black one, but its fingerprint-magnet rear would nudge us toward the white version if we had to choose. 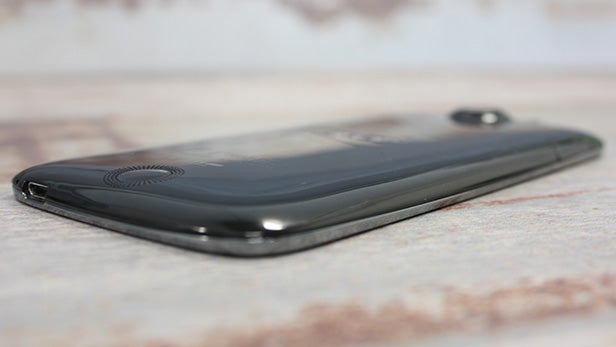 Acer went for a 5-inch display on the Liquid Jade, which we think was a great choice. That sort of display size will suit most users, and is big enough to make reading, gaming, and video playback enjoyable. The display uses a 720p IPS panel, which gives it away as a budget smartphone. It’s plenty bright and displays colours accurately however, so there’s not much to complain about here.

The display is also coated in Corning’s hardy Gorilla Glass 3. It’s not the newest version of Gorilla Glass, but it’ll keep the Liquid Jade’s screen intact in the event of minor bumps and falls.