The Acer Iconia W700 is not a rival for the iPad 4 or Google Nexus 7. Instead, this meaty 11.6-inch Windows 8 tablet wants to be your tablet, laptop and possibly even desktop replacement in one. To this aim, it comes with a desktop cradle and Bluetooth keyboard that makes it an alternative to the Microsoft Surface Pro. Combined with an 1.4GHz Intel Core i3 processor, 64GB SSD storage and 4GB of RAM it sounds promising on paper, but can it deliver on such lofty ambitions? 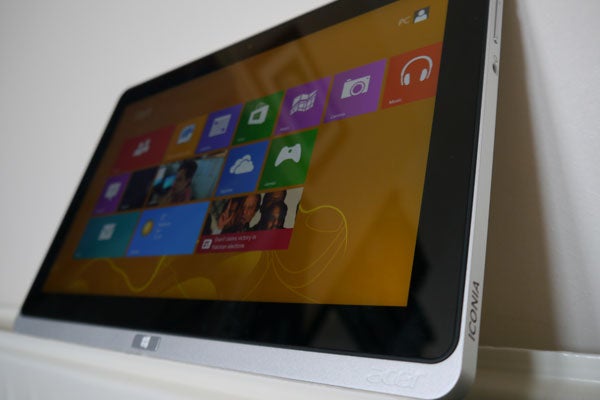 There’s no avoiding it: as a tablet the Acer Iconia W700 design feels big and a tad clumsy. At 11.1mm thick it’s actually a shade slimmer than the Microsoft Surface Pro, but at 950g it’s 40g heavier and its 11.6-inch screen – an inch larger than the Surface – makes it feel excessively large and uncomfortable in the hand.

As a case in point, while typing on the on-screen keyboard in landscape is fine, in portrait the W700 is just too heavy for comfort. Given its focus this much is to be expected, but anyone hoping for an iPad-like experience with Windows 8 features will be disappointed.

So it’s large for a tablet, but the build quality is top-notch. The Acer Iconia W700’s aluminium unibody shell is reassuringly robust – it safely survived a couple of considerable accidental bashes during our time with it, which bodes well for heavy users. It looks and feels like a quality product.

It’s a shame, in one respect, that this sleek exterior is cluttered by all manner of physical controls and connection ports. But the full-size USB port is useful for quickly sharing and viewing documents, and it has most of the controls and connections you need, including a headphone jack. The only slightly puzzling omission is a memory card slot, something that’s present on the Surface Pro.

There’s no option for built-in 3G/4G, either, though the USB port could conceivably be used with a dongle in an emergency.

The Acer Iconia W700 build quality is very good, but we can’t say the same of the accessories. The Bluetooth keyboard that partners the Acer Iconia W700 tablet is easy on the eye, but it feels cheap and nasty. It does nothing to reassure you it’ll survive a few months of heavy use.

But it’s a masterpiece of engineering compared to the desktop dock. It’s a cheap, plastic mess. It doesn’t complement the W700’s sleek exterior at all, and while it’s meant for desk use it’s worth bearing in mind the two combined are only marginally more portable than a laptop.

While the Acer Iconia W700’s price is tempting, it’s easy to see where Acer has saved money here. 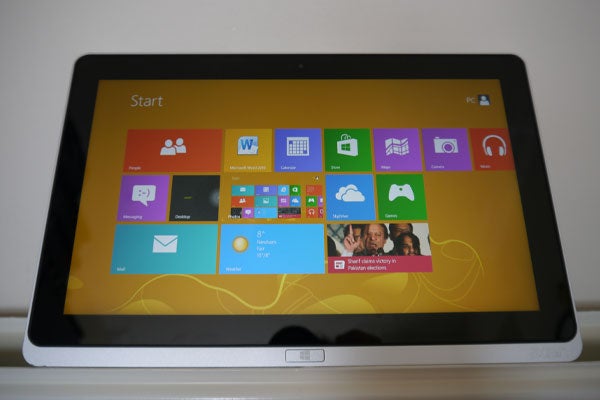 Where Acer has saved money on the accessories it’s spent it on the screen, as the Acer Iconia W700 screen is fantastic. It stops short of ‘retina’ quality, but its Full HD, 1,920 x 1,080 resolution makes the likes of the iPad mini look like a blurry mess. It’s considerably better than any you’ll find on a similar price laptop, such as the Samsung Series 5 NP540U3C touchscreen ultrabook, too.

Whether you’re viewing HD videos, photos or simply browsing the web, its strong, vibrant colours and deep blacks lift it above the likes the Lenovo ThinkPad Tablet 2. It’s very responsive and accurate to touch, too, with all scrolls between menus and homescreens coming without any fuss, fanfare or unwanted stuttering.

And while the Acer Iconia W700’s screen makes it bulky, it also makes web pages or viewing Word documents a joy. Text is sharp and detailed, while in portrait mode you can see and read far more in a single go.