What is the Acer Iconia W4?

The Acer Iconia W4 is an 8-inch, Windows 8.1 tablet joining the not so great Toshiba Encore and the more impressive Dell Venue Pro 8 as a place where you can get all the benefits of a full Windows PC like access to Microsoft Office and the ability to download desktop applications all in a much smaller, compact body.

The follow-up to the Acer Iconia W3, the first portrait-aspect Windows 8 tablet largely underwhelmed and while the W4 definitely makes improvements, the thinner, lighter tablet is still dogged by performance issues. 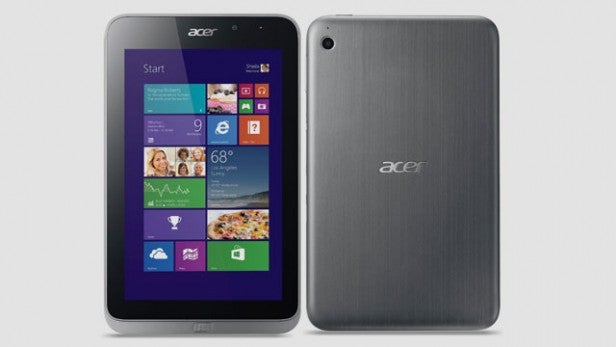 Essentially an upgraded Iconia W3, the W4 is closer in look to the Encore than the Venue Pro 8 with a predominantly plastic body that feels more business-like than Dell’s Nexus 7-inspired 8-inch tablet. It’s lighter and thinner than its predecessor, but not by much. Measuring in at 10.75mm thick and weighing in at 415g, it’s not as slim as the 7.9-inch iPad Mini 2 Retina but it’s reasonably light and comfortable to use in one hand for long periods.

There’s now a silver grey shade that runs through the entire body and around the screen bezel while the bottom of the bezel is thicker to accommodate a physical Windows button that let’s you jump back and forth from Desktop to the new tiled-interface. It’s useful, but it doesn’t do the Iconia W4 any favours aesthetically and when you are holding the tablet in landscape mode it’s a little strange to grip.

Buttons and connections include a volume rocker, micro HDMI to connect to a larger display and a Micro SD card slot that’s situated over on the right edge. Up top is the on/off button while the two speakers, headphone jack and micro USB sit on the bottom edge. Acer has kept the same 2-megapixel front-facing camera to take care of video calls adding a new 5-megapixel main camera with autofocus around the back. 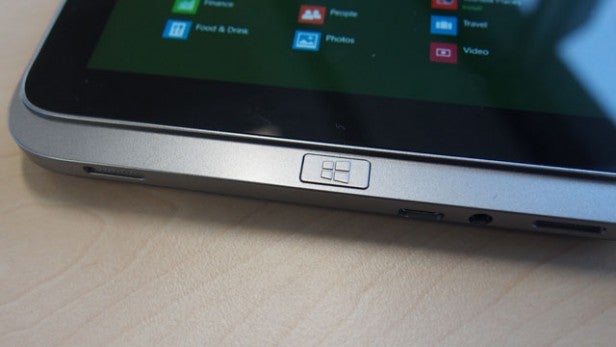 Like the Venue Pro 8, the microUSB works as a USB to connect additional peripherals, and unlike the Dell tablet a microUSB adapter is included in the box. The W4 supports Bluetooth 4.0, too, so it’s compatible with Acer’s official accessories and should work with third-party ones as well.

As a tablet to have knocking around in a bag, the plastic body is durable and tough enough to withstand the daily rigours, but it has a habit of picking up scuffs and scratches on the back and the trim so investing in a case would definitely be a wise move.

The W4 is certainly nicer looking than the Encore but it’s not radically different enough from the W3, making it a very plain uninspiring tablet to look at. Dell’s decision to go with a soft plastic back and all black design is a step in the right direction for smaller form Windows tablets if they are going to try and rival Apple’s iPad Mini and the much rumoured Nexus 8. 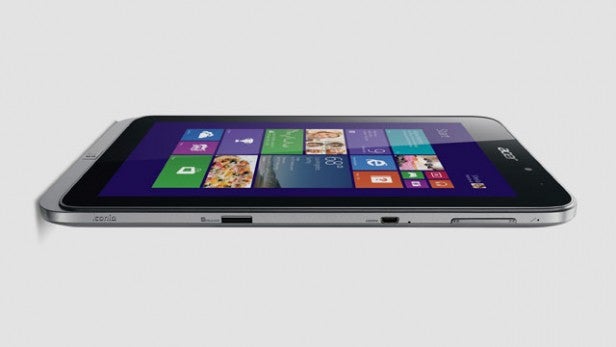 The Acer Iconia W4 features an 8-inch 1,280 x 800 IPS display with a 16:10 aspect ratio, matching the Venue Pro 8 and the Encore. More importantly, this is a welcome upgrade from the W3’s poor TN display improving viewing angles and reducing screen glare. Acer says it has managed to make the improvements by using ‘Zero Air Gap technology’ to remove the air between the touch panel and screen module. While we would agree the W4 is easier to view outdoors, underneath ceiling lights there’s still some issues with glare on the screen.

There’s a nominal pixel density increase from 186ppi to 189ppi, which means it lacks the exceptional clarity you’d can expect on small tablets like the Nexus 7, Kindle Fire HDX 7 or the iPad Mini. For watching video and reading web pages it’s acceptable screen quality considering, offering improved sharpness and good levels of contrast. Colours do lack a little punch and accuracy, however.

We were not particularly enamoured with the screen responsiveness, either. It supports 10-point multitouch, which is perfectly acceptable for a screen this size, and while it generally registers swipes and zooming there were times when we had to frustratingly double tap the screen to open apps. That’s all before you enter into desktop Windows realms and try to double-tap icons on the taskbar.

The speakers, meanwhile, aren’t anything spectacular. The twin speakers sit on the bottom edge of the tablet and in landscape mode it’s very easy to cup the one furthest away from the Home button. They are not very powerful and while it doesn’t suffer greatly with distortion and top volume, it lacks the richness to make it a great place to watch films. The better option is to plug in a good pair of headphones where the audio sounds a little more refined.