There’s a burgeoning market for small tablets from people who just don’t need the sheer size on offer from 10in devices, and the latest Acer aims to corner this segment with a keen balance of price and performance, including quad-core power and a Full HD screen for a tempting £170.

It faces strong competition, though, from unlikely challengers: two of the UK’s biggest supermarkets.

Acer isn’t the only tablet manufacturer that we could accuse of taking a bit too much inspiration from Apple, but there’s no escaping the similarity of Acer’s budget tablet with Apple’s smaller, pricier iPad Mini.

The front is dominated by a border of glossy white plastic, and the rear is clad in gleaming metal.

The little details give the Acer away, though. The top and bottom of the rear panel are divided by a couple of ugly seams, and there’s no round button on the front – instead, there’s an unresponsive Acer logo. The weight and dimensions give the Iconia away, too: the latest iPad Mini is slimmer and lighter than the Iconia while being significantly sturdier.

The Acer might look like an iPad, then, but it’s got more in common with the Aldi Medion Lifetab S10346 and the Tesco Hudl 2. It fares better when stacked up with these affordable rivals: its 8.5mm width matches the Aldi tablet, which has a 10.1in screen, and it’s slimmer than the 9mm Tesco device. It’s lighter than both competitors too, at 360g.

The Acer’s build quality isn’t quite as impressive. It’s better than the Aldi tablet, which suffered from uneven seams and a speaker that didn’t quite fit, but the Acer’s metallic back isn’t as grippy as the Tesco’s soft-touch plastic. It’s not as solid either – the back bends upon prodding, moving a millimetre or so until we hit the components inside.

The camera on the back protrudes, too, which means a higher chance of scratches to the 4-megapixel lens. Our final complaint about the Acer’s exterior concerns the haptic feedback, which is far too strong – it feels harsh and rattly compared to the more nuanced vibrations delivered by classier devices.

The Iconia’s micro-USB port sits on the top edge, alongside a micro-HDMI socket and the headphone jack, and the long left-hand edge has a micro-SD slot that can accept up to 32GB of extra storage. The power button and volume rocker are on the right-hand side, and they’re responsive and sturdy. 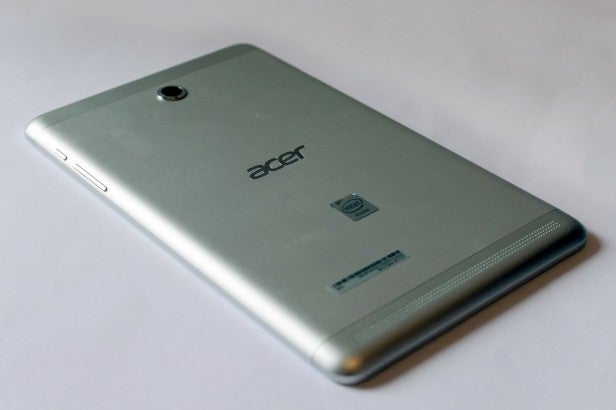 The Acer’s 8in screen arrives with a 1,920 x 1,200 resolution – the same as both of its rivals. That figure seems to be the new standard for budget tablets, and we’ve got no complaints: it’s enough to make text and icons appear sharp and to allow 1080p movies to play in their full glory.

The Acer gets it right when it comes to basic attributes, too. The 269 nit brightness level is enough for indoor and outdoor use – just about – and the 0.45 nit black level lends itself to suitably deep dark shades.

Closer examination reveals several niggling issues. Deep black shades and bright white shades are both tricky to tell apart, and the contrast ratio of 598:1 doesn’t lend itself to punchy colours – they’re a little washed-out throughout the range.

Viewing angles are poor, with brightness vanishing as soon as the screen is viewed from an off-centre angle, and the panel has a grainy finish. Colour banding is visible in subtle gradients, too. 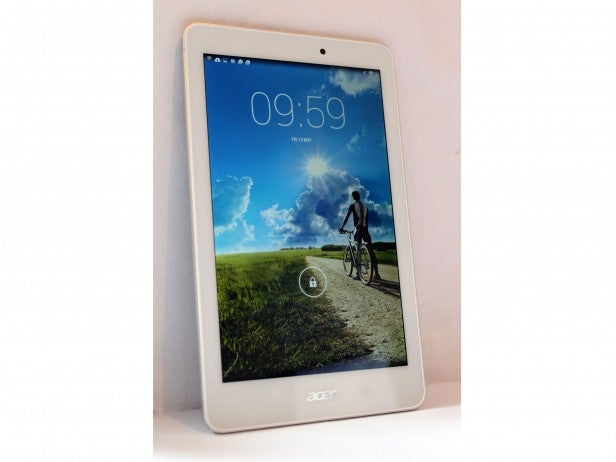 The Iconia’s collection of small faults mean this screen is only mediocre when it comes to watching movies and playing games – fine for casual content consumption, but disappointing next to most more expensive tablets.

It’s still better than the Aldi panel, which was similar in many areas but suffered from terrible responsiveness. The Acer can’t match the Hudl, though, which had better viewing angles and IPS technology underneath.

The Acer’s single speaker lies across the bottom of the tablet when it’s in portrait mode. That’s fine, but its positioning causes problems if game or movies are played in landscape position: our right hand blocked the speaker, which muffled the sound, and it’s a little awkward when audio is only being pumped out of one side of the device.

Quality isn’t much good, either. The Acer’s speakers aren’t loud enough, and the top end is tinny and feels distant from the rest of the range. The bass is quite weak, and the mid-range is underwhelming.

If you’re after a media tablet, Tesco’s Hudl has significantly better sound quality alongside its superior screen. 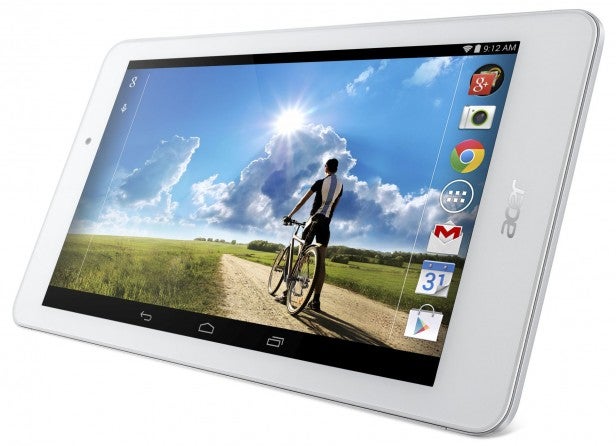 The Iconia comes packaged with Android 4.4.4, which is standard for budget tablets – but it does mean the Iconia misses out on the latest features available in Android Lollipop.

Acer’s own additions aren’t too impressive, either. The company has installed its own cloud storage, app store and suggestion apps, none of which improve on what’s installed on Android or available for free on Google Play. The included abDocs, Files, Music, Photo and Video tools don’t bring much new to the table, either – we’d still rather use Android’s own apps or software from the Google store.

Several third-party tools are installed, too. Amazon shopping, Kindle, mp3 and App Store apps take up room, and there’s Accuweather, Audible, eBay, Evernote and more. The WildTangent Games front-end has made its way over from Acer’s laptops, and McAfee makes its presence felt with irritating notifications.

Plenty of Acer icons litter the main desktop, and other homescreens have Amazon, Acer and Accuweather widgets. In short, there’s plenty of work to do out of the box if you’d like the tablet to be clean, efficient and rid of bloatware.