The Acer Iconia One 8 might sound familiar, and that’s because the company released an identically named tablet just last year. This is its sequel, and Acer hopes a handful of updates might be enough to woo new customers.

It’s a cheap and cheerful 8-inch tablet with some minor pitfalls, but for the £120-ish price tag, we’d say Acer got this one about right. It’s not glamorous; it just gets on with things. 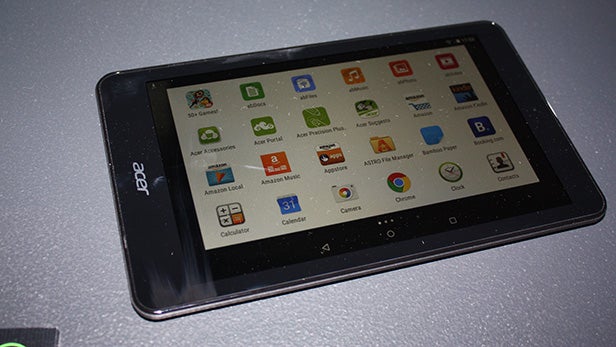 The Acer Iconia One 8 design isn’t very imaginative, but that’s by no means a bad thing. For a budget tablet, Acer made plenty of sensible choices. For starters, the One 8 is light for its screen size, weighing 355g. That’s about the same as the original Nexus 7. The dimensions are 127.7 x 213.9 x 9.5mm and the display is 8 inches – again, not miles off the Nexus 7.

It has a dimpled plastic back, which is typical of budget devices. This makes it easy enough to hold, and it’s grippy enough not to slide about on slightly tilted surfaces. There’s a Micro USB port on the bottom that sits alongside a headphone jack, while a volume rocker and power button sit on the side. Nothing to see here, folks.

The front is a minimalist affair, offering a screen surrounded by a black frame, and an Acer logo stamped on the bottom. The top and bottom parts of the black frame are thicker than the sides by some way – some may find this unattractive, but it makes it easy to hold in landscape mode. The device comes in a choice of 10 colours, and there’s a range of silicone cases that can be bought for bonus customisation. They reminded me a bit of the iPhone 5C cases, so fans of garish hues will be chuffed.

Perhaps the biggest design flaw is the speaker placement. The main speaker grille sits at the bottom of the back of the device, which is the ultimate faux pas for tablet audio. If you’re viewing media in landscape mode, your palm covers the grille and muffles audio. I’m not sure why Acer stuck with this design choice, as the same criticism was levied against the One 8’s predecessor. 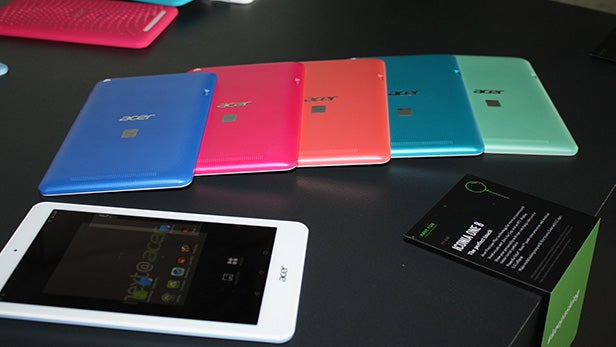 The Iconia One 8 uses an 8-inch IPS display that’s running at a 1280 x 800-pixel resolution. Colours were very accurate, which might jar for those used to using over-saturated flagship smartphone displays.

One of the headline features Acer was keen to talk up on the Iconia One 8 was that the display uses “zero air-gap” technology.

What this actually means is that Acer has minimised the distance between the display and the touch module. This is a good thing, because it eliminates touch-misreads when poking the device at wide angles. It’s also supposedly better for image quality, although I honestly didn’t notice much of a difference. 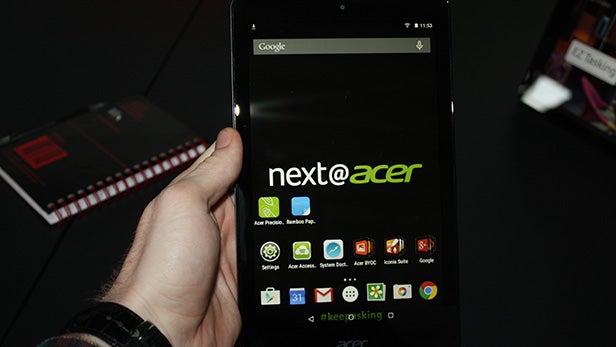 Acer’s Iconia One 8 runs on Android, with the key difference between this and last year’s device being that the new model ships with the latest Android 5.0 Lollipop OS straight out of the box. This means you’ll get a few new features courtesy of Google, including lock-screen notifications and improved battery life. Acer has had its way with the One 8 however, and has filled it with its usual roster of bloatware.

It’s important to note that pre-installed software isn’t necessarily a bad thing; Acer’s Iconia app suite will likely suit some users. If you start with 16GB of storage and then make room for the operating system, a bunch of pre-packaged apps can end up being annoying. I’d prefer it if Acer offered its app suite as an optional download on setup, rather than shipping the device chock full with branded content.

Despite the added bloat, however, the tablet seemed to get on just fine with a variety of tasks. Budget tablets and smartphones can sometimes be sluggish, but the One 8 handled everything we threw at it without a hitch. That’s thanks to the Intel Atom processor, but more on that later.

Acer also built some new technology into its touchscreen this time around, which is good news, as that’s the only way you can interact with this device. Dubbed “Precision Plus”, it allows Acer displays to register very fine tips. Acer was keen to show this off by providing sharpened pencils with which I was able to hack away at the display. It worked surprisingly well, and I was able to draw some rudimentary doodles with far greater precision than I could with my thick, jabby digits. While it’s not the most riveting feature, fans of styluses will get good use out of the increased receptivity. 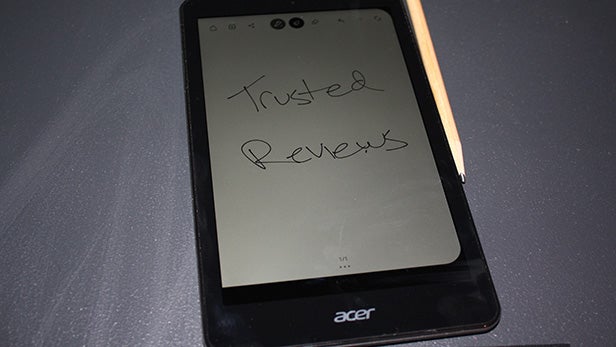 Right, onto the guts. Powering the Iconia One 8 is a quad-core Intel Atom Z3735G processor clocked at 1.38GHz. That’s paired with Intel HD graphics; decent for the price, but don’t expect to run Asphalt 8: Airborne with any degree of success. The processor is evidence of Acer’s long-standing relationship with Intel, and that’s no bad thing. We found the One 8 to be fast and responsive, and it handled tasks well. We tried loading up several apps at a time and it didn’t struggle. Don’t overdo the multitasking, mind; it packs a suitably budget 1GB of RAM.

The device comes in two storage sizes – 16 and 32GB. However, there’s a microSD slot – built into the back at an angle, and always open, oddly – which means you can expand the device’s storage.

We don’t know what size battery the new Iconia One 8 uses, but Acer claims it can last up to 8.5 hours. We’ll have to wait for a review unit before we can put this to the test. 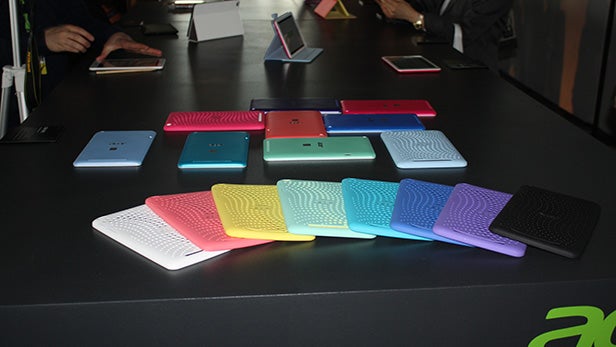 The One 8 has two cameras, one on the front and back, which is what we’ve come to expect from tablets. The front sensor is 0.3-megapixel, and won’t blow anyone away. Images shot with this camera are poor quality, but budget tablets tend to slack on front-facing shooters. Most importantly, it’s good enough to make video calls, which is about as good as it gets in this price range.

The rear-facing camera is better, and carries a 5-megapixel image sensor. Again, we weren’t overly impressed, but you’re never going to get impeccable snaps with a sub-£150 slate. The shots I took on the device were quite noisy and lacked detail in the background and foreground. Colours were represented well, however, and bright objects were reasonably vivid. You won’t want to take prize holiday snaps with the One 8, but you might get at least a few likes sharing images on Instagram with the right filter. 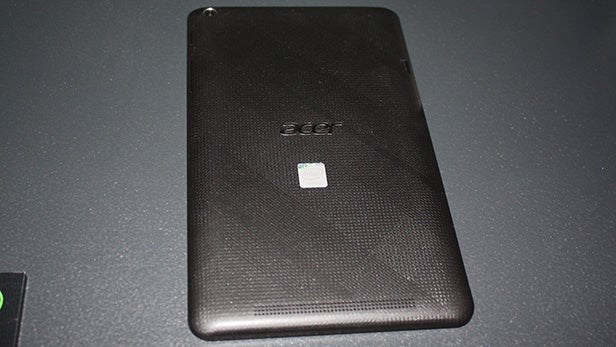 With a budget device like the Acer Iconia One 8, it all comes down to price. The UK pricing for the old version was £120, and the European pricing for this new version is €179, which puts it at around £130. For that price, you’re getting a fair cop from Acer. It runs Android 5.0 with ease, the touchscreen is receptive, there are two cameras, and you’re getting a HD display.

That’s not a bad wrap by any means, and while there are some clear niggles – noisy photos and an easily muffled speaker – we can’t say it’s bad value for money. Having had only a brief play with the Iconia One 8, it seems like Acer has got the important bits right for a low-end tablet, including the price.