The Acer Iconia A700 is what we might call a “full-size” tablet. With a 10.1-inch screen, its body is large enough to ensure that you won’t want to carry it around with you at all times. Like the iPad, this is primarily an at-home device, although if you spend an hour sat down on the train on the way to work, it’ll make a great travel buddy.

If you spend the whole journey standing up, the Acer Iconia A700 isn’t so hot. At 665g it’s roughly on-par with the weight of a full-size iPad 4, but is a little too heavy to use one-handed for extended periods of time. This is true of just about any 10-inch tablet, though. 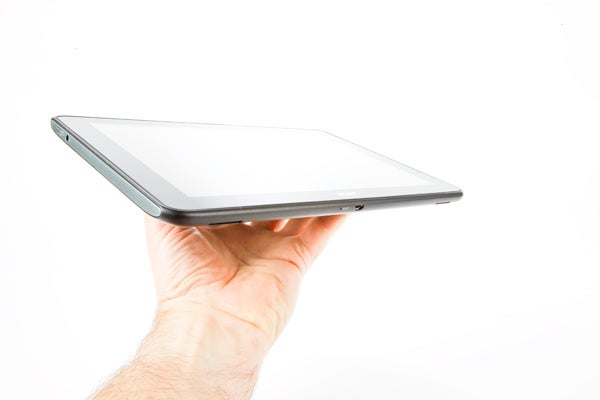 Specific to the Acer Iconia A700, the tablet has a more studious, slightly less stylish look than some of its peers. It’s down to the lines. The ends of the tablet are fairly angular plates of silvery plastic, where most tablet-makers opt for a more smooth-edged design. It doesn’t ruin the ergonomics of the tablet, but leaves it with a less finger-friendly feel.

Acer has tried to make the rear of the tablet feel good on the digits, though. As a lower-cost tablet among its peers, most notably the Asus Transformer Pad Infinity, its use of plastic rather than metal throughout comes as no surprise, but the back has been rubberised to avoid the cheap impression of some kinds of plastic. 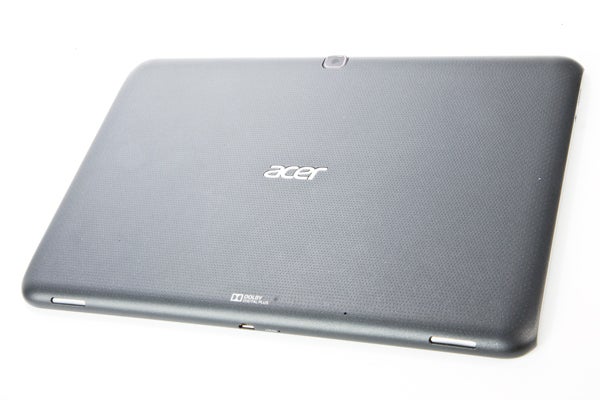 Asus used the same technique when it made the Google Nexus 7, and while the effect seems less impressive here in a much more expensive tablet, it still works. Again, though, the dotted texture to the rear works in tandem with the workmanlike sides and the unavoidable “PC” connotations of the Acer logo to make the Iconia A700 rank among the less desirable big-name Android tablets.

As is common with more functional-looking tablets, physical connectivity is decent. On one of the silvery plastic egdes, there’s a flap that covers the microSD memory card slot, letting you cheaply and easily expand on the 32GB of internal memory. Next to it, though, is a filled-in plastic hole where the 3G SIM slot would have been. It’s another reason why this is a tablet that is practical rather than beautiful. 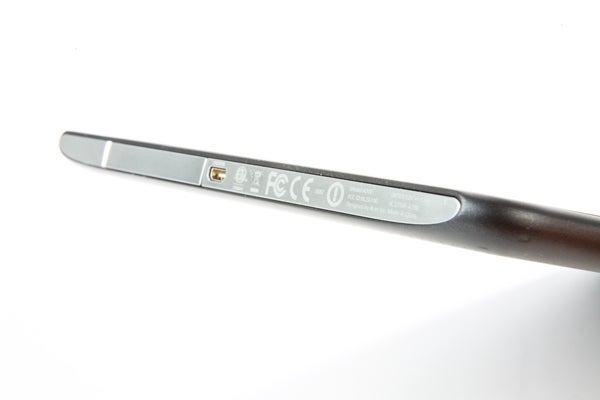 Up on the edge itself, rather than under the flap, is a microHDMI video output. On the bottom edge is a hybrid socket that accepts either the power adapter or a microUSB cable. The power plug uses a slightly different shape connector, but being able to jam in any old microUSB cable to transfer music and videos is a plus – many tablets use proprietary plugs. Connect the Acer Iconia A700 to a computer and its internal memory will show up as a media drive, allowing drag ‘n’ drop transferring of files. 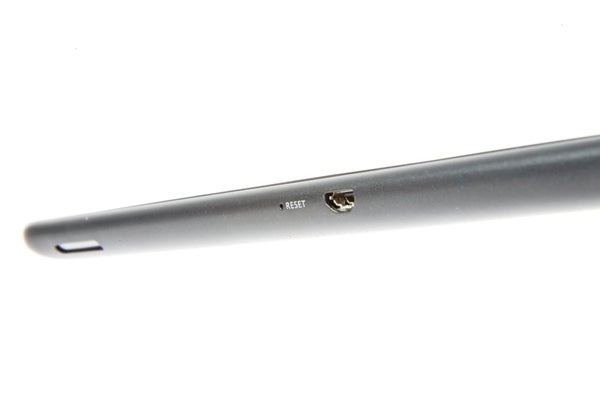 The Acer Iconia A700 is currently the high-end Android option in the Iconia line, and its most important flagship feature is its 10.1-inch screen. It’s one of the most affordable Android tablets to use a 1,920 x 1200 pixel display.

However, unlike most high-end Android tablets, its display doesn’t use IPS technology, made famous by the iPad and iPhone ranges. Acer says it uses an equivalent tech, but there are some visible differences between the screen types. 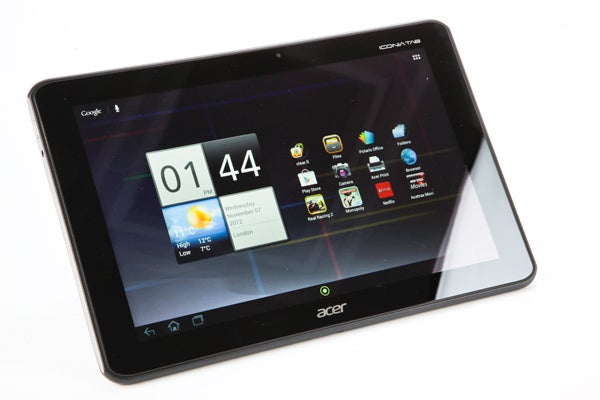 The high resolution makes text look smooth and sharp in all the right places, and colours are vivid. The screen’s surface is highly reflective, mind, making it a pain to use in bright daylight, and doesn’t appear to be oleophobic, causing fingerprint smudges within seconds. Brightness is respectable, but will have trouble competing with a sunny day.

Acer Iconia A700 Interface and Usability

The Acer Iconia Tab A700 uses a mildly tweaked version of Google’s Android 4.0 Ice Cream Sandwich OS, and the basic navigation and feel of Android remains in-tact. You have five homescreens you can fill with widgets as standard, and the other half of the system is the full apps menu. This holds all your apps in icon form. 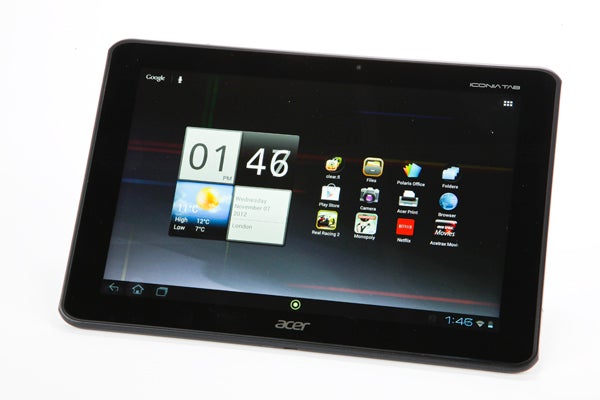 The tweaks Acer has made to the Android basics are mostly inoffensive. The icons on the nav bar have been changed to look smoother and friendlier, there’s a custom lock screen and an Acer-specific button in the nav bar, which launches a quick-fire menu overlay.

Both the lock screen and the new nav bar menu use circular feature wheels to give you quick access to frequently-used functions. The lock screen lets you head straight to one of four apps, while the nav bar interface features these app shortcuts and also lets you take a screenshot, control volume and head to any of your key browser bookmarks. 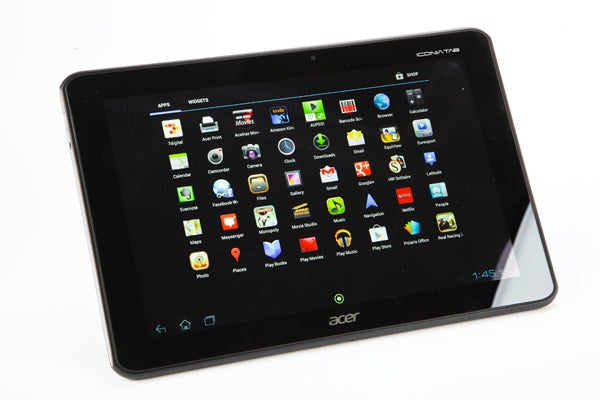 It is a bit of a pity that the nav button is bright green, though, pulling focus in a manner that’s unnecessary – if in-line with some of the tablet’s other questionable aesthetic choices.

The Acer Iconia Tab A700 comes with a handful of apps pre-installed, including the handy Polaris Office suite, but most importantly it has access to all the Google app basics, from Mail to Maps, and the Google Play app store. It’s a fully-certified Google product, which not all tablets are, and it has GPS too, enabling proper mapping using Google Maps and Navigation. 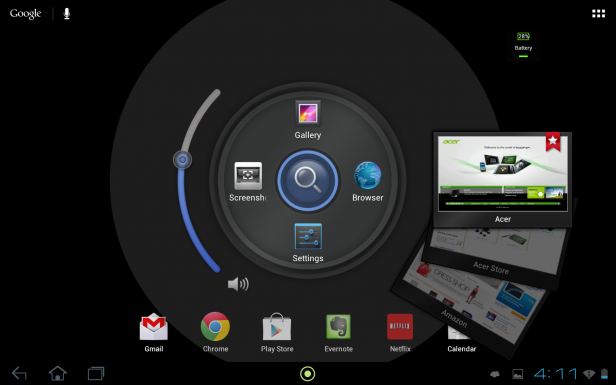 As an Android Ice Cream Sandwich device, the Acer Iconia Tab A700 comes with the stock Android browser pre-installed. Google has since switched to using the Chrome browser as its app of choice, but if you prefer this it’s available from Google Play as a free download.

Even without this new software, the Acer Iconia Tab A700 offers a great browsing experience. The high-resolution screen makes even small text appear sharp and readable, while the screen is of high enough quality to make the white backgrounds of sites look solid white rather than a mottled mess as they do on some lower-quality displays.

Like any self-respecting Android tablet in 2012, the touchscreen fully supports multi-touch input, letting you whiz in and out of web pages with fluid ease. Nowadays, though, the Android browser does not support Flash, which was once an Android calling card.

Adobe discontinued support for the web standard on Android earlier this year, and now the former Adobe Flash Android app isn’t even available to download from Google Play. However, as this is the state of play across Android, you’ll need to switch over to a Windows 8 RT tablet like the Microsoft Surface if you’re after Flash support.

Acer has not put too much effort into making the main camera a star feature, though. It doesn’t have a flash, and image quality is mediocre. There’s purple fringing all over the place, there’s no touch focusing and images tend to look a little glum. For casual shots it’ll do just fine, but start flailing around with a 10-inch tablet at a party and all you’ll end up with is ridicule or a broken tablet. Or both. 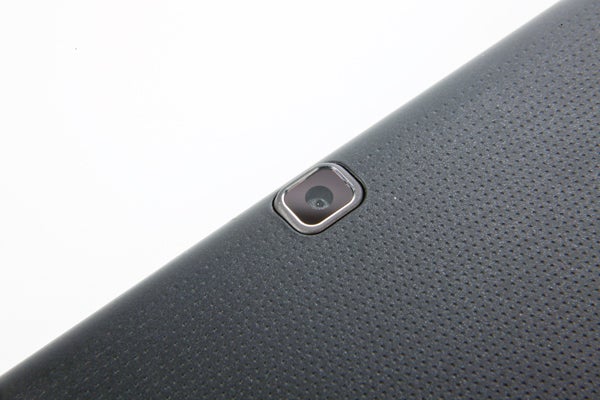 Video fares little better, with any remotely dark texture ended up speckled with purple. However, the Acer Iconia Tab A700 does capture video at up to 1080p resolution and lets you use the fun face-distorting video effects that were introduced with Android Ice Cream Sandwich. To be fair to the competition, though, these are only present because the tablet uses an entirely vanilla version of the Android camera app. 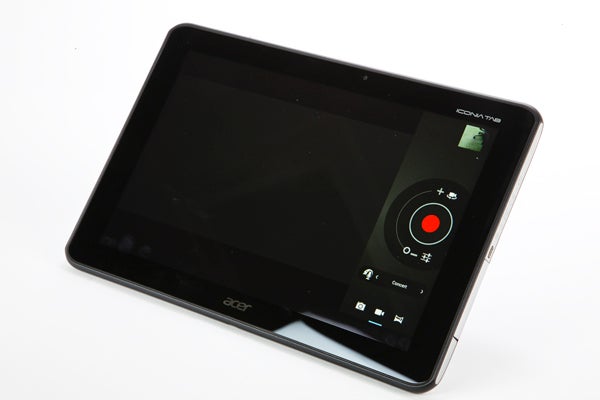 With a high-resolution, high-quality display, the Acer Iconia Tab A700 should make the perfect mobile cinema. It features its own video player app, on top of the standard Google one, which these days is largely a way to try and get you to rent films from Google Play.

The Iconia A700 video’s app is a useful little number too. It doesn’t offer any fancy features beyond simple video playback, but supports masses of video codecs and played virtually all of our test files without any glitches. There was only a brief glitch during the playback of a 42Mbps MKV file, but even then the general frame rate was perfect. 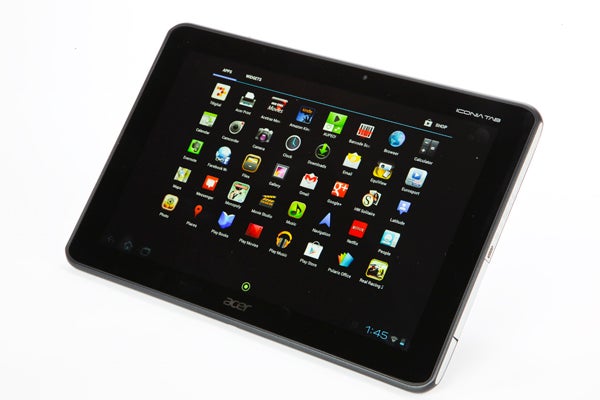 The Acer Iconia Tab A700 screen doesn’t blow out the colours to the point of an unnatural look either. Play a high-quality HD movie through this tablet and it looks fantastic.

There’s a stereo speaker array on the underside edge of the Acer Iconia Tab A700 too, where many tablets still use a mono speaker. Top volume isn’t all that impressive but sound quality is well above average. It won’t convince you that you’re listening to anything but a teeny integrated speaker, but it’s not the tinny, harsh noise that some tablets pump out either. It’ll be perfect for watching a bit of telly in bed.

Music gets the same treatment as video within the Acer Iconia Tab A700, with a separate music player app. Impressively, its interface has been properly optimised for the tablet’s size rather than feeling as if it has been simply stretched out from a smartphone version like so many media player apps. As we’ve seen elsewhere in the Acer Iconia A700, it has a slightly quirky visual style, but is a welcome addition.

We imagine the Acer Iconia Tab A700 tablet being used alongside a wireless (or wired) speaker or a pair of headphones rather than with the internal speaker. Like the camera feature, it doesn’t quite work in the standard context thanks to the lowly internal speakers. 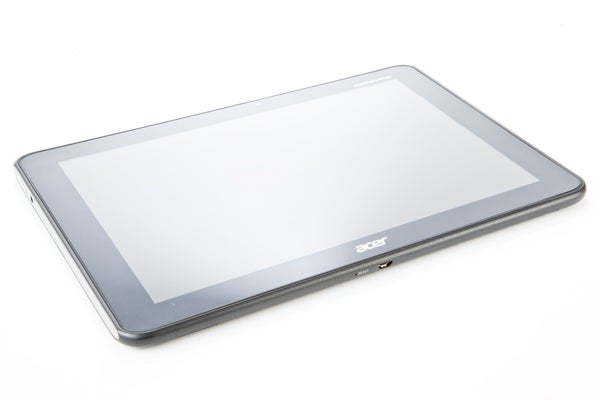 Apple’s iPad took a weight hit to keep the 10-hour stamina of its predecessors, but the Acer Iconia Tab A700 uses the same capacity battery as its lower-specced brother, the Iconia A510. The result is that battery life in the A700 isn’t hugely impressive, thanks to the increased resolution of the tablet.

Set to light tasks at medium brightness, the Iconia A700 supplies “all-day” battery life, but set to playing a video on loop it’ll last around eight hours. It’s respectable, but not remarkable when compared to the Asus Transformer Pad Infinity’s performance with the keyboard attached.

The Acer Iconia Tab A700 is a competent tablet that shows off what Android can do well, but in some key respects it feels like a test run at a top-end tablet rather than the real deal. Its screen is impressive in most respect, but the design and the poor cameras make it feel like it doesn’t quite belong at the top of the tree where it has set up shop.