With Vivitek’s H1085 recently setting a new standard for the £1,000 or less DLP projector market, it’s fair to say the H7530D arrives at a tricky time. But then with pretty much every new projector we see in this sector outgunning the last, maybe it will be able to continue the upwards trend. 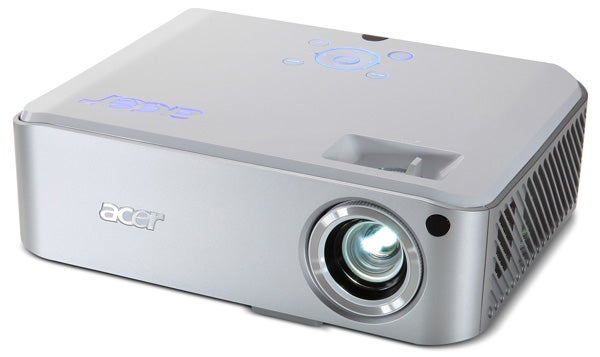 First impressions are decidedly mixed. The H7530D’s design, for instance, is pretty low on sculpting flourishes, but gamely tries to make itself look cute by the application of a surprisingly glossy finish and a large Acer logo with edges that illuminate in a bright neon blue when the projector is switched on.


To be honest, this sort of design doesn’t fill the cinephile in me with much hope as to the seriousness of the H7530D’s home cinema ambitions. The emphasis seems to be on (shudder!) family fun instead. But hey – maybe I’ll be proved wrong. Or maybe the projector will force me to let my hair down and just have a laugh for once rather than taking this whole projection thing so seriously!


My willingness to try and feel optimistic about the H7530D rather plummets, though, when I note only one HDMI among its thin row of connections. Both the aforementioned Vivitek H1085 and the £1,000 BenQ W1000 manage to provide two HDMIs, leaving the H7530D standing out like a sore thumb.

It does at least manage a full suite of composite/S-Video/component options, though, as well as an RS-232 control port and a 3.5mm audio input. This latter jack is there because, as with all the other really cheap projectors we’ve seen lately, the H7530D has a built-in speaker.


Obviously, as I always say, you shouldn’t expect much from this speaker. After all, it’s inevitably very low in power and dynamic range, and also produces a sound that neither possesses anything like the scale of the image it accompanies, nor sounds as if it’s appearing from anywhere near that image.


What the speaker does do, however, is provide a no-brainer audio solution for casual projector users fond of carting their projectors around to places where hooking up a separate audio system is hardly practical, if even possible.

The feeling of ire raised by the sight of just one HDMI softens slightly with an exploration of the H7530D’s onscreen menus. They’re unexpectedly good looking, for a start. But more importantly they also contain a surprisingly long roster of tweaks and features.


Among the more unusual (for the budget market) tweaks on offer is a selection of wall colour choices so that the image can be automatically adapted to suit your wall if you’re not using a screen. This is a clever touch for such a casual projector to offer, since it provides further support to the idea of the H7530D being usable anytime, anywhere. It’s hardly surprising, then, that the H7530D also ships with a handy shoulder carry bag.


Of course, the idea of catering for projecting onto coloured walls will again fill cinephiles with disdain. So thankfully there are a few other things on offer that will likely be more up the street of more ambitious users. Such as a five-step Degamma bar, a really healthy and varied set of presets (including a Presentation mode for people wanting a projector for business as well as pleasure), and Texas Instruments’ Brilliant Color mode for boosting the brightness of mid-tone images. 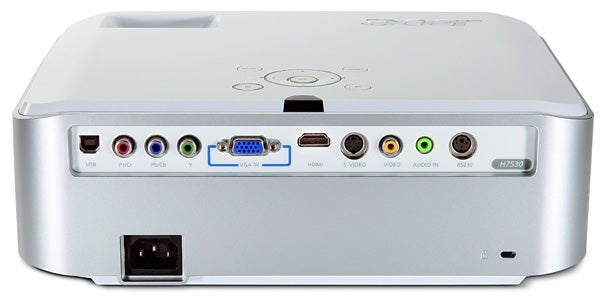 There’s even a colour management (sloppily spelt ‘magnagement’ in the onscreen menus) system of sorts, though this only allows you to tweak skin tones individually, or simply adjust the saturation level of each of the six primary colours. There aren’t separate options for adjusting the hue, gain and saturation levels for each colour. But this really isn’t a kicker at the H7530D’s price point.


Setting the H7530D up is as straightforward as you would expect with such a cheap and cheerful projector. There are simple zoom and focus rings accessible through a window on the projector’s top edge, and there’s an auto keystone adjustment to get the sides of the picture straight if – as is likely – you can’t position the H7530D directly opposite the centre of your screen.


The only tricky thing about the H7530D’s set up, in fact, is finding the right place to put it. For the amount of optical zoom on offer is predictably limited, and there’s neither vertical nor horizontal image shifting on hand.


I guess I should add for form’s sake that the projector does offer digital zoom, but this inevitably leads to degradation in the image quality. And, of course, having to use digital keystone correction to align the sides of your image because there’s no image shifting is far from ideal, since you are essentially distorting the source picture. But the H7530D is no different in this latter regard to its Vivitek H1085 and BenQ W1000 rivals.


The H7530D does offer a couple of interesting features that its rivals do not, however. It claims a contrast ratio of 40,000:1 for instance – way more than the Vivitek and BenQ models. Plus it has Acer’s own ColorBoost II+ technology which, as its name suggests, produces richer, brighter colours with smoother gradations. Acer also claims that its ColorSafe technology will halt or at least reduce the reduction in colour quality that all projectors suffer in the course of their life time, though clearly I couldn’t put this to the test in the time available to me for this review.

Acer hasn’t particularly impressed us, if we’re honest, with some of its previous stabs at satisfying the AV rather than PC market. But the H7530D really isn’t a bad home cinema projector at all.


Particularly impressive is how vivid its pictures look. This is especially true if you use the Standard preset with BrilliantColor active, but colours still retain more punch and dynamism than expected even after switching to the less aggressive Movie mode.


The H7530D’s pictures are also extremely bright for such a cheap projector, dominating a dark room and even remaining watchable with a little ambient light around.


The Acer’s combination of high brightness and punchy colours is very reminiscent of the BenQ W1000, in fact – though for me there seems to be a little more subtlety in some of the Acer’s colouring. It also seems to handle the potential excesses of the BrilliantColor engine slightly better too. 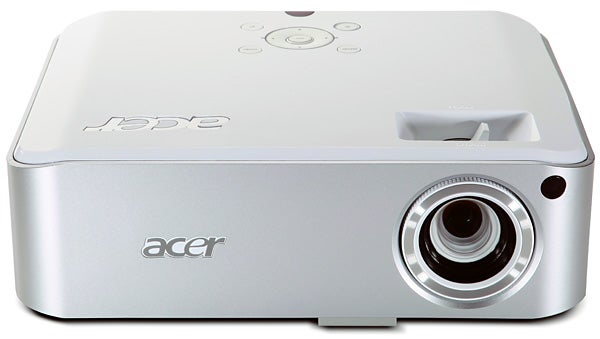 
This is true even if you don’t utilise the Dynamic Black option the H7530D carries – an option I actually suggest you avoid, for it crushes too much shadow detail out of dark areas for comfort.


The H7530D also manages to look respectably sharp and detailed with HD material. Slightly crisper than the Vivitek model, perhaps, and roughly on a par with the BenQ W1000. Though I should stress here that you can get a much cleaner, crisper picture finish if you’re willing to double – or more – your budget.


I was pleased, too, to note with the H7530D that it’s largely immune to cheap DLP’s once-common tendency to suffer with dot noise over fast-moving skin tones. And nor does it suffer judder badly for its money. Overall, in fact, I have little doubt that anyone who ends up with the H7530D will be pretty amazed by how much picture quality they’ve been able to secure for so little money.

That last statement on the previous page has to be followed by an inevitable ‘however’, though. For the H7530’s performance certainly isn’t immune to the compromises of its cheap price point.


The first and worst problem is a predictable one: rainbow effect. The reproduction in the picture of stripes of red, green and blue over really bright image elements and in your peripheral vision when you move your eyes around the image is a hugely common problem with all single-chip DLP projectors, but especially budget ones. And it really can be distracting on the H7530D during dark scenes like the one in ”Casino Royale” where Bond crashes his Aston Martin while trying not to run over Vesper.


Similarly, very bright image parts in console or PC games can show clear rainbowing, especially if what you’re doing requires you to rove your eye around the image in search of, say, an elusive enemy. 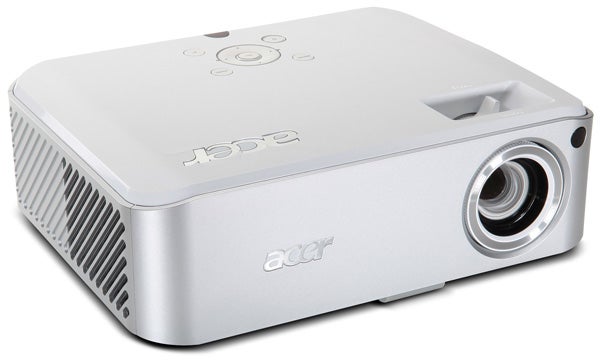 To put this point in more perspective, the Acer’s rainbow effect doesn’t actually render scenes borderline unwatchable, as can happen occasionally with BenQ’s uber-cheap (£500) W600 DLP projector. It also doesn’t seem more pervasive than it is on BenQ’s W1000. But the Vivitek H1085 certainly seems to suffer from it slightly less, and in doing so becomes instantly more consistently engaging.


The H7530D’s pictures also sometimes look a touch noisy – another common budget DLP flaw. Though this only becomes distracting on the rare occasions where it takes the form of blotchy skin tone reproduction.


I should say, too, that the H7530D’s colour palette can look a little too influenced by yellowy-green when using the provided presets, and I didn’t manage to wholly remove this even after manual colour calibration.


Finally, the projector isn’t the quietest runner around, clocking in at a hefty 30dB with the lamp set to maximum output, but still running at 26dB even with the lamp running in its Eco low brightness mode.


In many ways Acer’s H7530D is a pleasant surprise, proving again that the DLP chipsets now available to even £1,000 projectors are of a standard that would have been unimaginable as little as a year ago. It certainly still warrants at least an audition against its BenQ W1000 and Vivitek H1085 arch rivals. Though I suspect that many people who actually manage to put such a shootout together will probably reach the same conclusion that I did: namely that when push comes to shove, the relative reduction on the Vivitek H1085 of the rainbow effect makes it the one to go for, despite the H7530D having a slight advantage in the colour saturation and brightness departments.