Our review sample was supplied by Projector Planet

If more proof were needed that 3D is already a mass market AV format, then here it is today in the form of the Acer H5360BD. For what we have here is a 3D-Ready projector that costs just £530. And no, we haven’t missed a zero off the price.

What’s more, this price gets you built-in AV 3D. There’s no need for either an external transmitter or the Optoma 3D-XL external conversion box. Just attach your Sky 3D box or 3D Blu-ray player, and voila: you’ll be able to watch 3D from the H5360BD. It even has an HDMI v1.4a port (rather than a v1.3a) for seamless handshaking with 3D Blu-ray players. Which kind of makes you chuckle when you think that Digital Projection’s £90,000 Titan 3D projector didn’t even have an HDMI on it.

Your £530 doesn’t get you a particularly large chunk of AV ‘real estate’, if that bothers you. The H5360BD’s rather utilitarian-style, white-finished chassis is really quite tiny considering that, as well as its integrated 3D capabilities, it can pump out a startlingly high maximum brightness of 2500 ANSI Lumens. But its smallness will appeal, of course, to the casual ‘put it in a cupboard when you’re not using it’ market, at which it’s surely aimed.

The potent brightness noted back there should prove pretty handy in combatting the inevitable dimming effect you get when using the active shutter glasses associated with DLP-Link 3D technology. For yes, the H5360BD is a DLP-Link 3D projector rather than a full HD one.

Resolution obsessives will immediately baulk at not being able to see their beloved 3D Blu-rays at their maximum resolution. And actually, they won’t be able to watch 2D Blu-rays at maximum resolution either, as the H5360BD’s native pixel resolution is 1280×720. But again, for the casual market we suspect that ‘only’ having an HD Ready resolution seems like a pretty darned reasonable trade off for that £530 price.

Delving deeper into the H5360BD’s spec list we find that, surprisingly, it employs one of Texas Instruments’s Dark Chip 3 DLP systems rather than the older DC2 model commonly deployed in ultra-cheap single-chip DLP projectors. It also enjoys (deep breath): a contrast ratio of 3200:1; a 6-segment colour wheel; an ‘auto off’ mode if the projector doesn’t detect an input for five minutes; a five-year warranty on the DLP chip; and a one-year warranty on the lamp – the latter of which comes without an hour limit. This is all very respectable indeed for such a preposterously cheap projector.

There’s lots to explore in the projector’s onscreen menus, too. For starters, there’s a helpful series of themed picture presets, including Dark Cinema, Movie, Game and Sports modes. In further recognition of the casual circumstances the H5360BD is likely to be used in, you can even tell it what coloured walls you have (assuming you haven’t coughed up for a screen) from a selection of five core tones.

People who like to tweak can adjust the relative saturations of the red, green and blue colour elements, meanwhile, as well as the degamma level. You can also adjust the lamp output between high and Eco levels, and finally there’s an auto keystone correction system to help you get the sides of your image straight.

This isn’t entirely a good thing, though. For unfortunately – and predictably for the H5360BD’s money – the projector doesn’t have any vertical or horizontal optical image shifting to help you get the image positioned exactly where you want it on your screen or wall. So you probably will have to resort to keystone correction, despite the fact that this essentially digitally distorts the image.

The amount of optical zoom on the projector is also extremely limited, so hopefully your room will allow you the flexibility to move the projector forward and back until you can get the image size you’re after.

Trying out the H5360BD’s 3D performance first, we were startled to find it looking really quite enjoyable. For a start, there’s practically no crosstalk (double ghosting noise) at all, even during notorious crosstalk-causing scenes like the Golden Gate bridge sequence in Monsters Vs Aliens.

This helps 3D pictures look decently sharp, though you can tell that you’re only seeing 720p images rather than full HD ones. Images do look HD, but there is definitely not as much fine detail and texturing as you should see on a high quality full HD projector. The extent to which you are aware of this will depend on how much full HD projection you’ve seen to compare with, and how large you’ve pushed the image, with larger images showing up the slight lack of detail more.

There’s a relaxing, if not particularly deep, sense of depth to 3D images – though strangely, as with other DLP Link projectors we’ve seen, we found we had to set the 3D playback mode to ‘Inverted’ before the picture became comfortable.

Even the black level response from the projector isn’t bad in 3D mode – though dark parts of the picture do look a bit devoid of shadow detail.

The glasses themselves deserve kudos too. Not because they’re attractive and lightweight – they’re not. But because they a) feature a simple on off button (unlike some of the crazy ‘always on’ glasses we’ve seen recently) b) cover the majority of your field of vision; and c) do a better job of stopping light getting in behind them than many rival glasses. Note that you don’t get any glasses included within the projector’s price. Each pair will cost you £70.

The only issue we had with the H5360BD’s 3D images, really, is that motion can look a bit shimmery and indistinct at times.

Turning to 2D, we’d frankly expected the worst. And for a minute, that’s exactly what we thought we’d got. But thankfully the horribly washed out, over-bright image on show was a result of the projector for some reason retaining the 3D image presets that automatically kick in when the projector detects a 3D input. Once we’d manually deactivated DLP Link in the menus, we were able to access the previously greyed out picture presets again, and simply by choosing the Movie preset we ended up with a picture that was actually startlingly good in most ways.

Particularly unexpected but welcome is the depth of the H5360BD’s black level response. Inevitably for the money there’s a degree of grey mist over dark areas, but it’s not as pronounced or distracting as it usually is on uber-cheap projectors. In fact, it’s superior quite clearly to the black level response of the recently-reviewed Vivitek D538W-3D 3D-Ready projector – and that model costs £150 more. 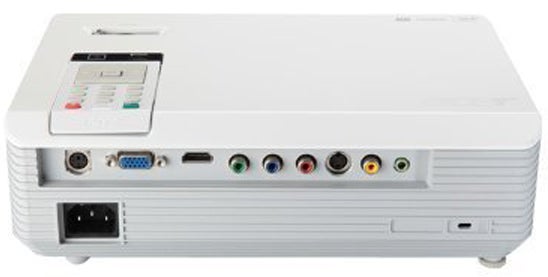 Colours are likable too, delivering plenty of punch and brightness yet retaining acceptably believable tones. To be clear, there’s nothing like the same subtlety in blend resolution and range of tones that you would get on a more expensive projector, but this doesn’t stop images being enjoyable.

Non-3D HD pictures also oddly look slightly sharper than the 3D ones, making us feel less aware of the projector’s non-full HD native resolution. Motion is a little prone to judder but not unacceptably so, and there’s only the occasional appearance of the dotting noise during camera pans or over skin tones, as people cross the screen, that you often get with cheap single-chip DLP projectors.

Another smaller issue is that in full brightness mode – the one you should use for 3D – the projector does run slightly noisily. But it’s not really excessive, and switching to the eco lamp output for 2D viewing reduces the noise level dramatically.

If you pan quickly around while gaming you can sometimes see a momentary ‘colour leak’ around the edges of bright objects, and it’s also possible to see traces of pixel structure in the image if you’re sat too close to the image. But this isn’t noticeable from any half-way sensible viewing distance. 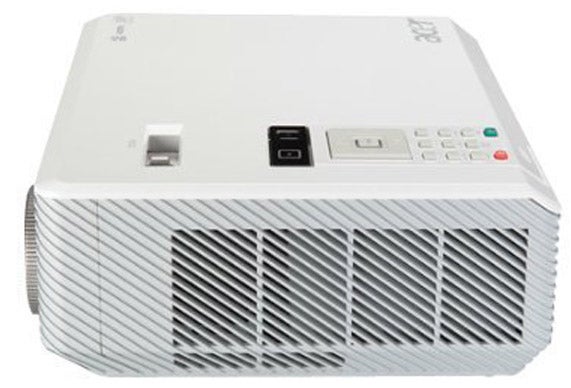 In fact, the H5360BD might have been one of the easiest budget recommendations we’ve ever tested were it not for one single but potentially ruinous flaw: the rainbow effect. Dark scenes routinely show up the telltale red, blue and green striping over any bright sections that might be in the image, and you’re also aware of the issue if you happen to flit your eyes any significant amount around the image.

During bright scenes the issue is far less obvious. But of course, precious few films contain exclusively bright scenes, and whenever a dark scene appears, if you’re susceptible to seeing the rainbow effect, you will certainly feel distracted by it.

The key bit of that last line is ‘if you’re susceptible’. For we’ve consistently found that some people are much more affected by the rainbow effect than others. We actually think we’ve become quite susceptible to it over our years of reviewing projectors, so it’s possible other people won’t feel that it’s nearly as severe an issue as we do. All we can suggest is that you give an H5360BD a trial yourself – ideally with anyone else in tow who’s likely to be watching it much if you buy one – and see how you get on.

Verdict
Trying to get a demo or ‘try before you buy’ go with an Acer H5360BD might sound a hassle, but we’d argue that it’s definitely worth it. For if it turns out that you aren’t bothered by the rainbow issue, you’ll be free to bag yourself more genuine projection fun than we would frankly have thought possible for £530.