Remember how the InFocus X10 shifted the projector price goalposts recently? Well, now Acer is already doing it again with the H5350: an HD Ready DLP projector that can be yours for £421. Yes, £421.


Surely such a crazy price must mean the H5350 is a basic data projector with some half-arsed video capabilities tacked on? Apparently not. On the Acer website the projector is the only model residing under the ‘Video’ category heading, and the press release alerting us to its existence clearly calls it a ‘home theatre projector’. Crikey.


Even more compelling evidence for the home theatre argument is the H5350’s use of video-friendly DLP technology rather than PC data-friendly LCD technology, and a really respectable (given the price) contrast ratio of 2,000:1.


This latter figure suggests that the projector places plenty of emphasis on black level response, a picture element we’ve generally found to be essential in delivering a truly cinematic home theatre picture (rather than the brightness element more crucial to data projection).


Really the only specification that gives me any cause for concern is a quoted brightness level of 2,000 ANSI Lumens. A figure as high as this can be a good thing if it arrives in the company of a really high contrast ratio. But as it stands, the 2,000 ANSI Lumens brightness/2000:1 contrast ratio balance makes us wonder if the picture might be a touch PC-biased after all.


Perhaps inevitably, £421 does not buy you much hardware. The H5350 is absolutely tiny by home cinema projector standards, barely occupying more space than an Oxford English Dictionary. Of course, this is hardly a problem for the sort of casual user most likely to be interested in buying it, as it means it can easily be tucked on a bookshelf or in a cupboard when it’s not being used.


Not surprisingly, perhaps, the H5350 is not going to win any design awards. It’s essentially a white rectangular box, and that’s it. But the glossiness of the white finish and the slight angle upwards from front to back of the top panel do at least give it a modicum of panache.


Connectivity gets the job done reasonably enough. I’d half expected not to find any digital video input on such a cheap machine, but in fact there is a solitary v1.2 HDMI, accompanied by component video, D-Sub PC, S-Video and composite video options. A built-in USB port slightly raises those ‘data presentation’ concerns again – but then, of course, USB ports are increasingly common on all sorts of AV gear.

Setting up the H5350 brings the first real problems. For starters, the remote control is pathetic; one of those horrible skinny things powered by watch batteries that inevitably get lost down sofas or left in pockets even when they’re predominantly used in a bright room, never mind the pitch black environment that’s best for watching films in.


I also found the wind-down leg mechanism for adjusting the picture angle fiddly and imprecise, and was pretty dismayed by the puny amount of optical zoom on hand. If you’re really struggling, the projector does carry a x2 level of digital zoom. But I always steer clear of digital zooms where possible, as the processing they use invariably leads to some corruption of the video quality.


It should be said, though, that the H5350 isn’t a total set-up wash-out. For starters, its focus ring is effortless to use, and keystone correction is on hand to get the sides of your pictures straight if you have the projector positioned above or below the centre of your screen. 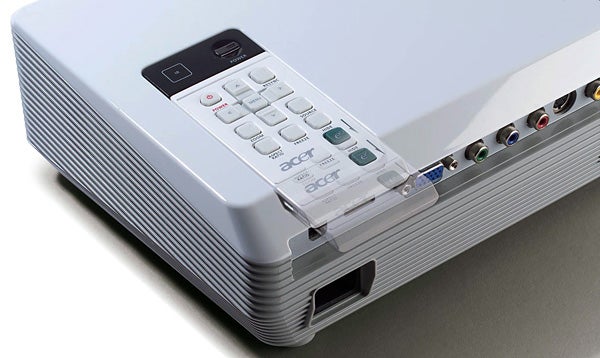 The basically presented but efficient onscreen menus also contain a few unexpectedly handy features for home entertainment users. The first is a duo of ‘Cinema’ presets, Vivid Cinema and Dark Cinema, of which the Dark option is comfortably the best. There are also dedicated Sport and Game presets, showing that Acer clearly appreciates the sort of casual ‘party’ duties the H5350 might find itself undertaking.


There’s more video mileage to be had from degamma and red, green and blue intensity adjustments, as well as an ‘eco’ mode that reduces the lamp output in return for deeper black level response and (considerably) less fan noise.


I was pleasantly surprised by the H5350’s image compatibility, too. PC and MAC support is offered to UXGA, SXGA, XGA, SVGA and VGA VESA standards, while video playback support even runs to the latest 1080p/24fps system favoured by Blu-ray discs.


One of the H5350’s more unusual tricks is that it can actually play sound. Obviously it does so very feebly, and there’s the usual problem of how the sound from a projector has no geographical connection with the picture on the screen metres away. But we guess the audio might just about be handy when you’ve got a room full of people watching a football match or something similar.


One final rather neat feature that casual ‘put it away when you’re done with it’ users will appreciate is the ability to unplug the H5350 as soon as you’ve finished watching it, rather than having to wait for its lamp to cool down as is the case with the vast majority of other projectors.

Much though I tried to keep in a neutral frame of mind as I set about the H5350, I have to say I wasn’t expecting much quality at all from such a dirt-cheap DLP offering. But while its pictures are not even close to the quality of those from the InFocus X10 we mentioned earlier, they are not a complete horror show.


It’s probably best if we get the bad stuff out of the way first, so you can decide if you’re still intrigued enough at £421 to move on to the good news.


Without question the single biggest problem is the amount of DLP’s rainbow effect the projector suffers with. If you haven’t read much about DLP projectors before, the rainbow effect is caused by the colour wheel system DLP technology employs, and manifests itself as stripes of pure red and green over the picture – particularly over especially bright image segments, and also if you move your eyes around over the image. Black and white footage, with its extreme bright/dark separations, is particularly badly affected.


The rainbow effect has generally been reduced considerably in recent times, but the amount of it that’s visible on the H5350 definitely harks back to an earlier, far-from-golden era. 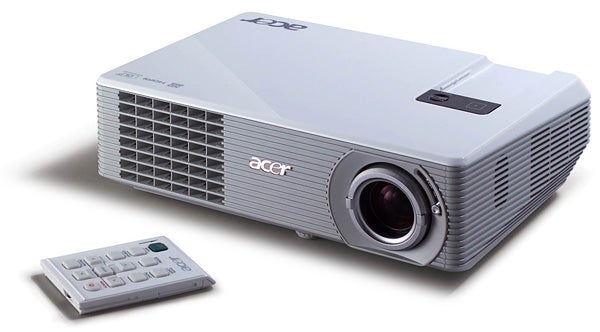 Normally this issue would be enough in itself to pretty much crucify a projector’s chance of impressing TrustedReviews. But in the H5350’s price context, I think it’s reasonable to offer up a couple of ‘get out clauses’. Namely that a) if the image you watch isn’t too big and so doesn’t require you to rove your eyes over it too much, the occurrences of the rainbow effect are considerably reduced, and b) some people just aren’t affected by the rainbow effect at all. Somehow their eyes just don’t seem to see it. So if you’re one of those people, you’re laughing all the way to the bank.


Anyway, my other main concern with the H5350 is its black level response – or to be more accurate, the lack of shadow detail in dark areas. For while the H5350 can actually produce some remarkably deep blacks for its money, with considerably less greying over than you’d see on any sort of cheapo LCD projector, dark areas of our ”Unbreakable” Blu-ray transfer do look rather hollow, with quite a bit of shadowy picture information going AWOL.


A more minor concern is that the projector’s colour tones aren’t as natural as those of DLP models higher up the price scale, looking slightly over-ripe. Also, on my 120in screen some edges look slightly jagged, and occasionally – mostly with over bright text – I could even make out evidence of the pixel structure of the DLP mirror device.


Set against these flaws is the fact that the image is exceedingly bright for such a cheap projector without, as we’ve seen, completely destroying black level response.


Also, while not always particularly natural in tone, colours are certainly rich and vibrant, and don’t suffer badly with the phenomenon of striping over what should be smooth colour blends.

The picture is surprisingly sharp for such a cheap, non-Full HD model too, with decent amounts of pore and hair detail in ”Unbreakable’s” endless extreme close-ups. Plus there’s nothing major in the way of scaling noise caused by the translation of a 1080-line source to the projector’s 720 lines (unless the jaggedness around some contours is partly caused by this).


It’s nice, too, to find the faces of the people at the ”Unbreakable” train station where Bruce Willis tests out his ‘evil detection’ powers passing by with practically no trace of the dithering noise that was once so common to DLP technology. While we’re on the subject of motion, the picture isn’t as juddery as I would have expected either, even when watching 1080p/24 sources. 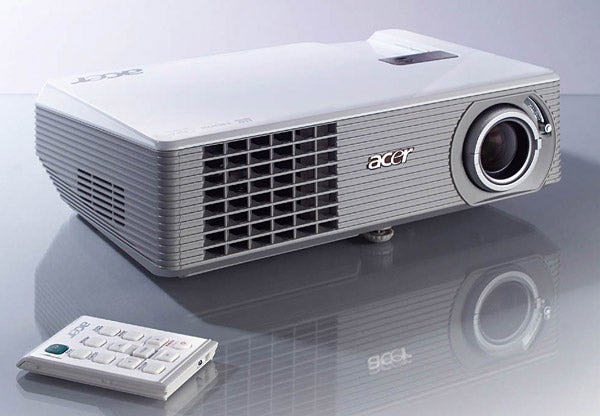 Whatever scaling system the H5350 is using struggles a little more with standard definition inputs, but the results are certainly far from unwatchable.


My final comments regarding the H5350’s performance are that it actually runs surprisingly quietly for such a small unit, especially if you do the sensible thing and use the Eco lamp mode. Although perhaps as a side effect of this quietness, it also runs rather hot – a potential issue if you’re sat very close to it.


In the end it’s quite hard to know quite how to judge the H5350. In many ways it makes its £421 price tag look quite ridiculously cheap, with pictures a country mile better than anything else I’ve seen for anything like the same puny outlay. But at the same time, if you’re particularly prone to seeing DLP’s rainbow effect, you might find some footage almost unwatchable on the H5350. Hmm.


If you are troubled by the rainbow effect, our ‘6′ mark for picture should be more like a 5. Whereas if you’re not bothered by it all, you could just about raise the mark to a 7, especially if you’re thinking about it in the context of other projectors in its price range.