It should go without saying that whatever netbooks were in the beginning, they’ve changed a great deal since then. Not always for the better we might add, particularly where affordability is concerned, but any nascent product category is always going to evolve. Thankfully, with new netbook technology and platforms finally on the horizon, an end to the stagnant, phony war we have now is finally in sight.


Take Acer’s latest effort, the Ferrari One, as an example. A product of AMD’s and Acer’s relationships with Ferrari’s Formula One team, it’s the first ‘netbook’ to use AMD’s new Congo platform. However, with its new dual-core processor, 11.6in HD Ready display and HD capable graphics, it’s arguable whether the Acer Ferrari One is a netbook at all. While its £399 MSRP is just about within the confines of netbook territory (only just), its hardware gives it more in common with ultra-low voltage laptops like the HP Pavilion dv2 and similar.


As such, for the purposes of this review, we’ve treated it like we would them, running our usual gamut of laptop tests – we’ll save the larger debate for another time. It’s worth noting the Acer Ferrari One isn’t alone in treading this fine line, either. Dell’s Inspiron 11z, another 11.6in ‘ultra-portable’, is already on sale and HP and Toshiba also have designs on this category. You can fully expect others to follow and a price war to begin. 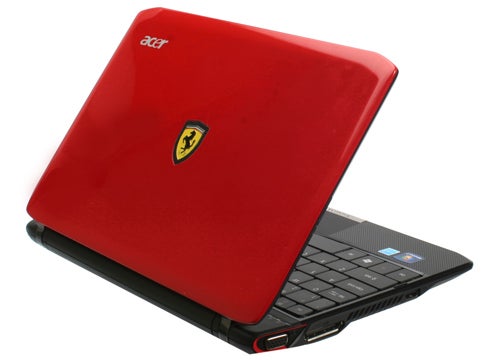 Given its Ferrari association it’s no surprise to see plenty of Scuderia inspired elements in the Ferrari One’s design. Its scarlet red lid is a given, as are the famous prancing horse badges so iconic of the folks from Maranello. Other ‘sporty’ touches include the faux-carbon fibre on the palm-rest and, somewhat bizarrely, the tyre inspired rubber feet. In truth, though, due to the constraints on price this isn’t the flamboyant, decadent product that past Ferrari-branded efforts were.


Fundamentally, then, this is good-looking, well-designed machine. It won’t leave people gasping in admiration and inevitably some may dislike the connotations of owning a Ferrari-branded product, but it won’t embarrass you either. Provided, that is, you remember to turn off the ‘vrrrooooom’ boot chime. Now that is embarrassing!

Where its design, or rather its size, is of particular benefit is the keyboard. Due to the 11.6in frame it is among the best ‘netbook’ keyboards around, with large, easy to use keys and a solid uncluttered layout. We’re not totally sure about the curiously-shaped touchpad that accompanies it, but by and large the 1.44kg chassis treads a good line between portability and usability.

What’s really interesting about this machine, though, is its hardware. Indeed, the whole Ferrari branding is something of a distraction really; if judged alone without the prestige of the badge the Ferrari One holds its own both in performance and value. 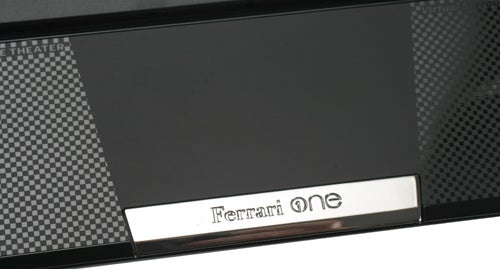 It starts, of course, with the processor. With two cores running at 1.2GHz and 1MB L2 Cache between them, the AMD Athlon X2 L310 is still no powerhouse, but it does just enough and the extra core ensures it’s significantly snappier than Intel’s Atom. It’s a fact helped by the presence of Windows 7, whose performance on this still limited machine bodes well for other netbooks. This processor is supported by 2GB of RAM and ATI Mobility Radeon HD 3200 integrated graphics, the latter of which is a decisive advantage over any Atom-based netbook.


We’ll get into why shortly, but in addition to these core hardware features, you get a decent 250GB, 5,400rpm hard drive, Wireless-N Wi-Fi, Gigabit Ethernet and Bluetooth. Added to this is Dolby Home Theatre audio, which gives this machine an edge, especially when using headphones. 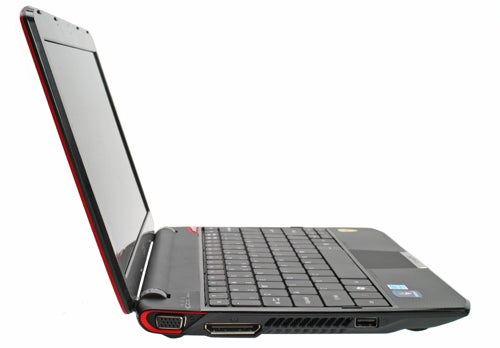 Most unusual, though, is support for ATI’s XGP technology. XGP, for those who don’t know or recall, was announced last year. On paper it’s a very cool technology, enabling the use of external graphics solutions to be connected via the propriety port. Since it uses its own port, XGP isn’t limited by the bandwidth of an ExpressCard slot like similar products.


Unfortunately, XGP has never really taken off and we can’t see the Ferrari One sparking any revival. Innovative as the technology might be, it really needs to be applied to something with more all-round abilities than a netbook-cum-affordable ultra-portable. Moreover, its presence, we assume due to the size of the port, means there’s no integrated HDMI port, which would prove more useful.


Particularly since the ATI integrated graphics is more than useless. Like the much hyped nVidia ION platform, it can decode 1080p video smoothly, with no dropped frames and minimal jitter. Depending on the source material it normally does this with around 50 to 60 per cent CPU utilisation, so it’s a shame you can’t stream audio and video to a TV or monitor through one cable, as an HDMI would allow. 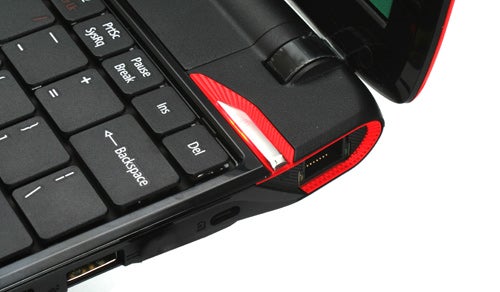 This superior graphics capability extends to a modicum of gaming ability; in Track Mania Nations we managed a (just) playable 21.9fps at medium detail settings and a healthy 29.1fps at low. With enough tweaking you could even play the likes of Call of Duty 4 on this, so less graphically demanding titles (World of Warcraft, The Sims, Spore et al) should be playable. This is isn’t a gaming machine by any stretch, but if you must, you can…just.

Lack of HDMI aside the Ferrari One has competent connectivity. Like most netbooks it has three USB ports in total, though none offer eSATA or ‘sleep & charge’, while a VGA video output, memory card slot, audio jacks (1x headphone, 1x microphone) and an Ethernet port round off the options. This is all pretty consistent with the netbook mantra. Given the price it’s hard to complain about the lack of any niceties, including an optical drive, which this machine is far too small and slim to incorporate.

It’s not too small or slim to have a decent display, though – quite the opposite in fact. LED backlit and with a roomy 1,366 x 768 native resolution, it’s a really great display to work on and to enjoy video content on. We were particularly impressed with the brightness of the display, which went some way to forgiving the predictable glossy, reflective finish. Viewing angles aren’t a strong point, but neither are they a great weakness, so overall it’s a good’un.


Overall performance is impressive, too. In PCMark Vantage the Ferrari One outperformed the HP Pavilion dv2-1030ea and Acer Aspire Timeline 4810T-353, both of which used single-core ULV CPUs. Until we get a look at Intel’s new CULV offerings it’s hard to see how this stacks up, but for the money the Ferrari One offers very good performance, particularly in light of its HD video playback and modest gaming abilities.

Unfortunately, where battery life is concerned, things do take a light jolt. In the low-intensity Reader test the Acer managed a creditable four hours and 50 minutes, but this dropped markedly to three hours, 35 minutes in the Productivity segment. Still not terrible and it may be enough for many, but it’s clear that when the machine gets busier its battery life takes a large hit. Larger than you’d normally expect at the very least.


A clue to the cause of this difference can be found in how noisy the machine can get. In truth this isn’t a massive surprise, AMD laptops tend to run warmer and noisier than their Intel counterparts, but in an ultra-portable/netbook like this it’s an important factor. Even when idle the fan runs at a noticeable speed, ramping up considerably when the system is under stress. This constant spinning does keep the unit cool, but clearly it’s also having a negative impact on battery life. 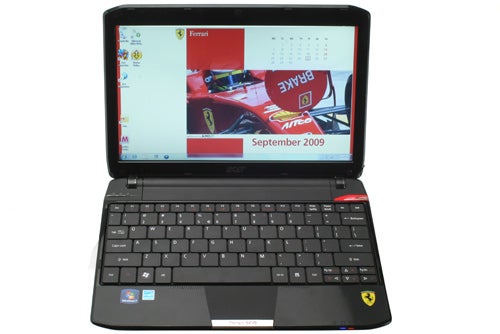 
Whichever way you look at it, as a netbook or as an ultra-portable, this is an impressive and enticing proposition. For the price the Acer Ferrari One offers excellent performance – including smooth 1080p video playback – while the balance of features, portability and usability is just right. But it does have weaknesses, namely the lack of HDMI, its innate Ferrari-ness and its okay but not outstanding battery life. It would be foolish to dismiss this machine for these problems alone, but they do just preclude it from an award.