In the industry, it’s a commonly held opinion that AMD missed an opportunity over the last few years. Despite its Athlon 64 dominating Intel for speed for a number of years it somehow failed to close the gap in the mainstream market. A large part of this is that AMD doesn’t have either Intel’s budget or marketing nouse and now that Intel has grabbed the performance ball back from AMD, the latter could be in real trouble.


One positive marketing move on AMD’s side was its association with Ferrari, which Acer has capitalised on with its range of AMD based Ferrari notebooks. I reviewed the first one a couple of years ago and more recently, Riyad looked at the 4000. However, now that AMD is a firm second for performance on the desktop will Ferrari appreciate being associated with second best? 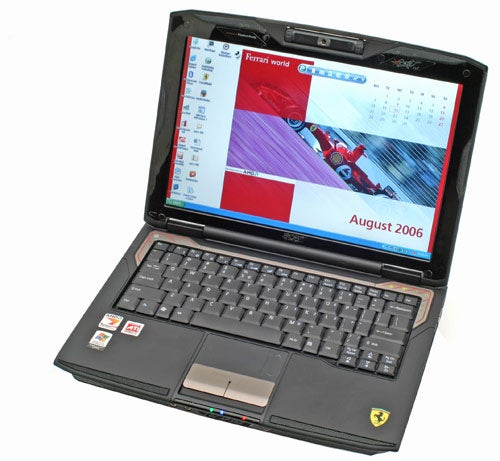 As far as cool, slightly over-the-top design goes though, not only has this latest Acer Ferrari still got it, it raises the bar even higher. The 1000 is a new ultra-portable model and with the supplied 6-cell battery weighs in at 1.75Kg – not super light but not bad. However, when you realise that the DVD-ROM drive is not integrated – it’s less impressive. When you consider that the likes of the Sony TX series and the Samsung Q35 are both ultra-light yet integrate an optical drive into their small chassis then alarm bells start to ring.


Getting straight to the heart of the matter (or should that be heat of the matter), the reason is the choice processor. The 2GHz AMD Turion X2 ML-60 is AMD’s fastest dual-core mobile processor and as we’ll see it does offer impressive performance. However, the Thermal Design Power (TDP) is a hefty 35W compared to 31W for the competing Intel Core Duo. This is the most likely reason that Acer wasn’t able to fit an optical drive inside the chassis – there wouldn’t have been enough room to cool the chip. An alternative would have been to use a slower processor but then Acer would hardly have been able to brand this as a Ferrari notebook. 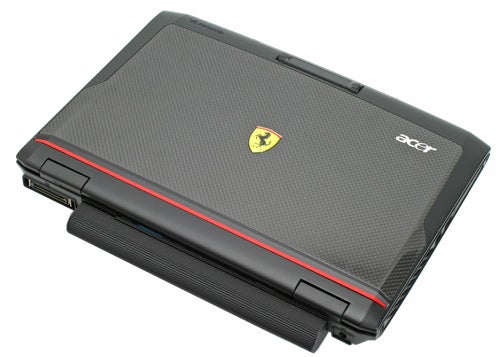 Style wise though, Acer has got it down. The lid looks great with its carbon fibre weave design and yellow Ferrari logo underneath a protective plastic coating. I much prefer this to the highly garish red on the lid of the first Acer Ferrari notebook.


Opening it up and you find the Acer has really gone to town on the design. Round the keyboard, at the top left and right corners are silver buttons separated by glowing red lines that are flush with the chassis – very much akin to the keypad on the endlessly popular Motorola Razr mobile phone. It looks great. The power button lights up blue at the top left, while at the right are shortcut keys for your email program, your web browser, the Acer ePowerment software, and one that can be manually programmed. Beneath this are the Caps Lock, Num Lock and hard disk activity lights. 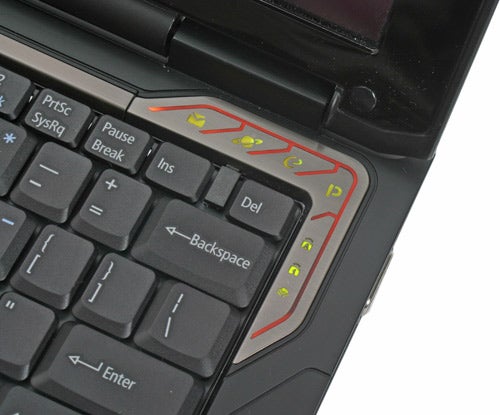 Matching these are metal mouse buttons that taper downwards towards the front of the notebook. These don’t feel comfortable to use at all unless you press right at the bottom edge, but there a ridge present to allow for this. ‘Ferrari 1000’ is engraved into these but bizarrely the font used for the word ‘Ferrari’ is not the official one, an irksome lack of attention to detail.


There’s another niggle – below this are the slider switches for turning on the wireless and the Bluetooth. These are funkily designed angled buttons that look good, but one of them has 3G imprinted on it. This got us excited thinking the 1000 even included an integrated 3G SIM card but it doesn’t, indicating that Acer is using generic switches. You’re not going to find generic parts on a Ferrari F430, so why would you want one here? 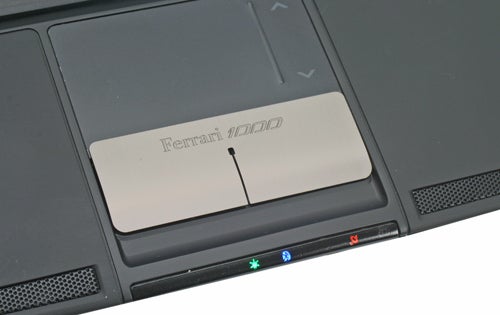 Next to the switches is an infra red port for retro connectivity action, while the headphone socket doubles as the S/PDIF, and the line in for the Realtek integrated audio. The speakers are behind a cool looking grille but the sound output from them is quite poor and weedy – however over a good pair of headphones it sounded full and sweet.


At the far left at the front there’s a card reader accepting the usual suspects – SD, MMC, MS and xD. On the left had side you’ll find a USB port and a full size Firewire port. This is handy for attaching DV Camcorders but you’ll use it mainly for the aforementioned external DVD-ROM drive. It might be external but Acer has at least given it a really cool design in keeping with the rest of the notebook – it has angular buttons and a red streak down the side – it looks like Darth Vader’s personal external DVD-ROM drive – and that’s a good thing.

Also on the left toward the front is a PC Card slot, 3G data card ready, while at the back left is a large output area for the CPU heatsink. Even just running Windows, a web browser and Word, a fair amount of heat is shunted out of this grille. The Turion X2 ML-60 is a fairly power thirsty beast and that energy has got to go somewhere. Behind this is a Kensington lock for keeping your Ferrari secure.


On the right hand side, you’ll find two more USB ports, a 56K modem and a Gigabit Ethernet port, which is good to see. There’s also a VGA output. The rear is taken up mainly with the battery but there is a port replicator dock at the rear.

The display is a 12.1in widescreen with a resolution of 1,280 x 800, which is a perfectly acceptable resolution for this size of screen. Screen quality is good – it’s evenly lit, colours are bright and it’s adequately sharp. Vertical viewing angles are poor but that is very common on laptops. I was pleased to see a webcam embedded into the bezel at the top of the screen. Even if it’s something you’ll rarely use, when you do need it, it means it’s already there and avoids clutter or extra expense.

Keyboard quality is also good – not the best I’ve tested, with the new standard for an ultra-portable set by the Lenovo I tested recently, but there were no issues, with all the keys where I expected them to be. The shortcut button at the top right of the keyboard provides a direct link to Acer’s own ePowerManagement tool, which pops up like a Mac OS style widget. This is pretty cool and provides a number of useful tools, including access to the Acer customised power settings.


As befits an extra special system, Acer has gone a bit further and provided some cool extras. Most functional of these is a Bluetooth VoIP phone, which slots into the PC card slot, when not in use. Also included is a small wireless laptop mouse, but of course is decked out in the Ferrari theme with a matt black main body with reds streaks and emblazoned with the distinctive yellow logo. Finally, there’s also a cool bag to carry it all round in. 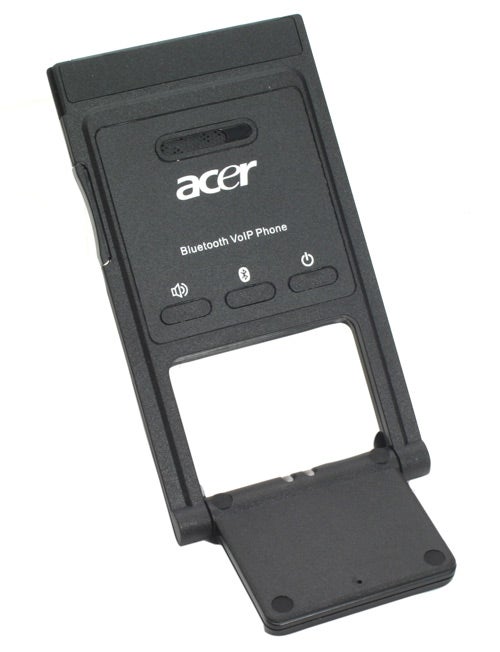 There’s no denying then that the Acer Ferrari 1000 looks the part, but how does it perform? The Turion X2 ML-60 processor pushes the Ferrari 1000 past the Core Duo T2300 in the Q35 we reviewed in SYSmark 2002, while in PCMark 05 it’s the same story save for the graphics score. Of course that’s not a like for like comparison, since the Core Duo chip in the Samsung is the entry level model, but this is reflected in the Q35’s significantly lower price. 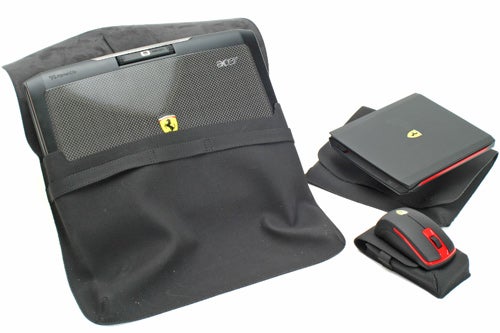 As well as the charge from the Samsung, the case for buying the Acer is made all the more difficult when you consider than the Dell D420 notebook (review coming soon) also doesn’t have an optical notebook drive but makes up for it by being smaller and lighter, features a Core Duo processor and also has a built-in 3G data card – that’s for real, and not just a misleadingly labelled button.


The Acer Ferrari 1000 is a very attractive package that manages to wear the Ferrari badge with pride due to the brute force approach of an AMD Turion X2 ML-60. The sleek style of the Ferrari 1000 certainly has a lot of appeal but you’ll have to put up with an external optical drive, which seems a step backwards when Intel based rivals can integrate one yet are even lighter. But while you might be able to cope with that, the lack of battery life in an ultra-portable is a flaw that could prove harder to ignore. 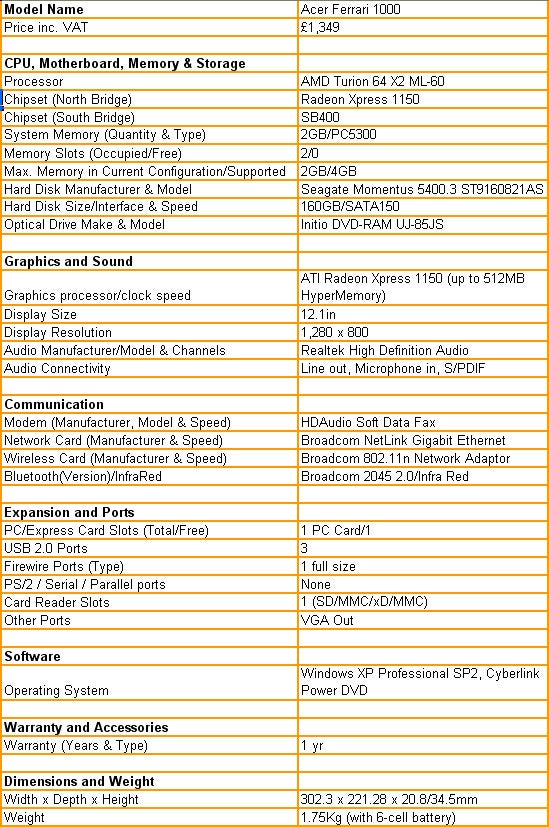