If you’ll take Microsoft’s word for it, sometimes a mere NAS device isn’t good enough. No, rather you need a Windows Home Server in your, well, home, taking care of your backup, media sharing and remote file access needs. The Acer easyStore H340 is one such system purporting to offer any household willing to welcome it – it’s a simple, but powerful, centralised storage repository able to cope with anything likely to be thrown at it. 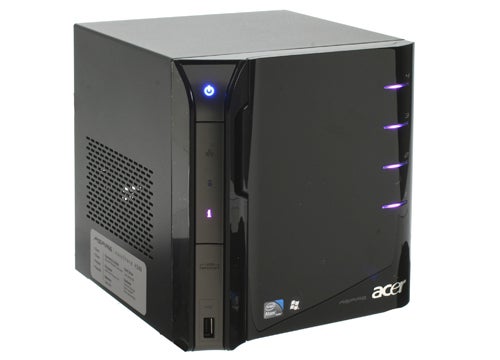 Leaving aside its operating system, the easyStore H340 isn’t so different from many other NAS devices we’ve looked at. It has a single USB port on the front and a quartet on the rear, alongside an eSATA port and a Gigabit Ethernet port. A snip under £400 will net an Acer easyStore H340 pre-fitted with two 1TB hard drives, leaving two more of its four bays free. These are, incidentally, hot-swappable.


So far so usual, and the H340’s 200 x 180 x 210mm dimensions and 4.5Kg (drive-less) weight aren’t particularly outstanding either. Internally, things are a touch more interesting: a 1.6GHz Intel Atom 230 CPU coupled to 2GB of RAM should give the easyStore H340 a bit more poke than many NAS devices in its class, even accounting for Windows Home Server needing more processing power than the custom Linux OSs used by other NAS boxes. 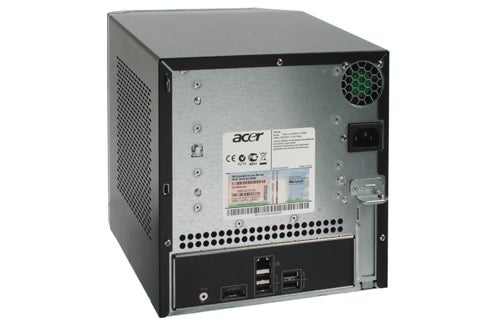 While I remain unconvinced that an Atom-powered netbook could ever replace my trusty Vaio TZ, I certainly can’t fault the performance of the Atom CPU powering the H340 – at no point did I find the system unresponsive. File transfer speeds were in line with expectation as well. A standard Windows file transfer of an 879MB file returned a write speed of 26.9MB/s and a read speed of 30.7MB/s, with FTP performance even better, giving 36MB/s write and 38.6MB/s read, over the office Gigabit Ethernet network.


Atom-powered NAS devices are not a particularly scare resource, however, so primarily it is Windows Home Server that stands as the selling point of this one. Fortunately, as we’ve already discovered through the Tranquil T7-HSA Home Server and Fujitsu Siemens Scaleo Home Server 1900, to name just a couple of systems, WHS isn’t half bad. It has a few quirks and even some short-fallings, but in a home network configured to make use of its advantages those will likely go unnoticed.

The foremost of Windows Home Server’s, and thus the easyStore h340’s, issues is the complete lack of RAID support. In fact, WHS resides on the primary disk installed in the H340, in a 20GB partition all of its own, with the rest of the drive allocated to storage duties and backup on the server side is taken care of through simple duplication of folders onto another drive.


In an ideal world, no end user will ever notice this – it all happens in the background – but it’s worth being aware of. The biggest risk is that if the primary partition fails and takes the server with it. You’ll then have to replace that hard drive and use the recovery disc provided to restore your data, where other systems would enable you to simply replace the dead hard drive with a working one, then get on with things while the RAID array rebuilds in the background.

Backups from a PC to the easyStore H340 are considerably less fraught. A normal NAS might bundle software letting you configure backups to a schedule of your choice, but the H340 makes things even easier. Using the Windows Home Server Console you can set the H340 to periodically reach out and take a backup of any Windows PC on your network. It’s so simple I reckon that even the simplest simian could cope with it.


What’s particularly nifty is that those computers can be woken remotely to be backed up, and will power down again once it is complete. Primarily this serves a power saving device, but it also means that if you meant to leave your system on to be backed up, but turned it off for some reason, any scheduled backup will still take place.

Remote access is handled particularly well. If you have a Windows Live login (which most of us do, if only for our Messenger or Xbox Live accounts) then you can tie the H340 to a web address at homeserver.com (in the format yourname.homeserver.com). You might note that other NAS devices offer similar solutions, but what’s outstanding about the WHS implementation is that it also gives you access to shared files on computers on your home network, if you so desire, which is pretty cool.


The H340 takes care of media streaming well, too. Any uPnP device should have no problem picking up any file it can play from any shared drives on the H340. Acer has also pre-installed the common Firefly iTunes server, which will monitor your shared folders and push compatible files to iTunes, be that on a PC or Mac. 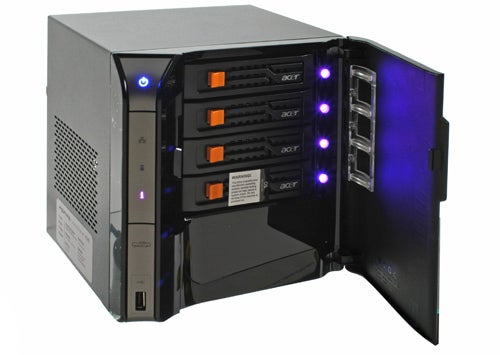 Another benefit of Windows Home Server, and thus the H340, is the ability to install add-ins. One particularly useful one has been pre-installed by Acer: Lights Out. This enables you to set a schedule for the H340 to power up and down, using a useful calendar view. If you’re particularly into your power saving, setting the H340 to turn off while you’re at work, and back on again before you arrive home might well appeal. Other add-ons not included, but which I would highly recommend include an FTP management system, Time Machine compatibility, if you have any Macs at home, and the somewhat useful uTorrent. 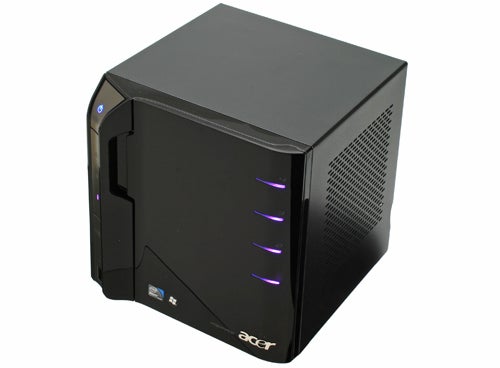 Better still, that’s just what’s available using the management console. Many NAS boxes can have third party applications installed, too, but Windows Home Server can also run just about any application that will run on a desktop PC. If you’re feeling brave, you can use Remote Desktop to take complete control of the H340 and install just about any program you like. A prime choice would be WinRAR and a funky little program called AutoExtractor, which (who would have guessed) automatically extracts RAR’d torrents on completion – I’ll leave you to guess why that might prove useful.


The Acer easyStore H340 is keenly priced and well featured. Windows Home Server’s simple initial setup process belies its underlying capacity to be hugely customised by a willing user. NAS devices are so 2009, what you really want is a home server.