The DX900’s main claim to fame is that it’s the first Windows Mobile handset to support dual SIM cards. Why would you want a dual SIM phone? If you have to ask the question then a dual SIM handset is probably not for you. For others, though, support for dual SIMs is handy because instead of carrying around separate mobiles for work and personal usage, you can get the same job done with a single handset. They’re also useful if you travel a lot and want one SIM for calls within your home country and another local SIM for use abroad in order to avoid racking up horrendous roaming charges.


Despite the world’s first claim, the DX900 has actually been available before in a slightly different guise. This is because it’s basically a re-branded version of a handset that was previous released by E-Ten under the Glofiish brand. Acer snapped up E-ten last year and has now re-released the phone as its first own branded handset. However, shortly it’s due to be joined by new models including the F900 and M900.

Looks-wise the DX900 isn’t exactly what you’d call handsome. It’s rather large and chunky and at 143g is quite weighty too. You’ll definitely notice it when it’s tucked away in your pocket. However, it does feel very well built and its sturdiness gives you confidence that it’ll stand up to a few knocks and scrapes.


The slightly rubberised feel to the rear of the case also makes it quite tactile to hold and means it’s not likely to easily slip from your grasp. Unlike manufacturers like HTC who use the miniUSB port to double up as the headset jack, Acer has instead kept the two separate. This means you can still take calls or listen to music when the handset is being charged or synced with your computer. However, the hands-free connector is a small 2.5mm socket rather than a normal headphone jack so you won’t be able to use your own headphones with it unless you invest in an adaptor.


Of course, the key difference between this handset and its rivals is that it allows you to have two SIMs installed and active at the same time. That said, although there are two slots, they’re certainly not equals. Only the first slot supports 3G/HSDPA, as seconds one is limited to 2.5G data speeds, which seems like a rather puzzling limitation to us. Once the SIMs are installed you do get two indicators on the home screen to show you the relative signal strengths of the two mobile networks.


Acer also includes an application that lets you control how the SIMs are used. This lets you easily switch between the two mobile networks, but also allows you to turn off one completely – handy if you want to switch the work SIM card off on the weekends or during holidays without having to actually physically remove it from the phone.

Like most of the current crop of Windows Mobile 6.1 based smartphones, the DX900 tries to hide some of WinMo’s interface deficiencies by adding a more user-friendly interface over the top. Acer has gone for the Spb Mobile Shell, although it’s used the older v2.1, rather than the newest V3.0 version of the software. This is pretty much the same interface used on the O2 XDA Zest. We liked it on the Zest and we like it here too because the simple, grid-based menus and minimal graphical animations make it feel very fast and responsive to use.


However, as with all Windows mobiles when you drop back to the standard WinMo interface, the fiddly buttons and fussy menus come as a bit of a shock. That said, you do get the benefits of the Office Mobile bundle of apps for editing documents on the go and also support for multi-tasking – something which Apple hasn’t managed to properly implement yet.


The DX900 is built around a Samsung 533 MHz processor, paired with 128MB of RAM. It’s not the fastest handset on the block, but it’s performance is more than good enough to handle most day to day tasks like emailing, music listening or video watching, although memory can get a bit tight at times. Storage space is also a bit limited at 256MB, but at least you can add extra storage via the side mounted microSD card slot. 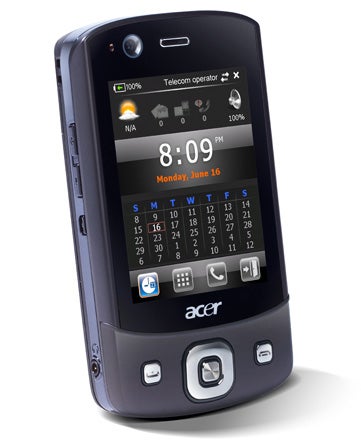 As with most of today’s smartphones the handset also has built-in GPS. There’s no navigation software provided, but the GPS worked great with the free Google Maps app. It was quick to lock on to satellites from a cold start and managed to hold on to them pretty well even in heavily built up areas. Connectivity is pretty good too with Wi-Fi and Bluetooth supported, and as mentioned already there’s also HSDPA support for when you need web access when you’re on the move.


Call quality is one of the handsets strong points. It holds on to weaker signals pretty well and the ear piece is one of the loudest we’ve come across, so in noisy environments like train stations it’s easy to hold a conversation without saying ‘eh?’ every 15 seconds.


Unfortunately on the battery front things aren’t so rosy, in fact they’re pretty dire. Despite the big, chunky battery the handset struggled to last for more than a day with medium usage of the core functions like taking calls and web browsing. That’s very disappointing when most of the latest WinMo handsets are good for around two days. The camera is also a bit of a let down as it only has a 3.0 megapixel resolution, and despite the presence of auto-focus and an LED flash the shots it takes are a bit on the soft side and colour fidelity isn’t wonderful.

We love the DX900’s dual SIM approach and really wish this idea was implemented on more phones. However, in other areas this handset doesn’t fair so well. It’s rather large and heavy by today’s smartphone standards and the battery life is also a bit of a let down. The latter is especially disappointing as with better battery life it really could have been a useful option for those who need to juggle phones for work and personal use.