The Acer ConceptD 9 is a fascinating proposition for professional creatives, with this premium laptop looking to be a portable alternative to the Microsoft Surface Studio. Whether it's worth the steep price is difficult to say at this early stage.

The Acer ConceptD 9 is one of the new laptops in Acer’s creative-focused range, boasting a cutting edge Intel 9th Gen processor, a versatile flippable 4K touchscreen and a bundled Wacom EMR Pen.

Everything about the Acer ConceptD 9, from the design to the components, has been considered with designers in mind. The swivel screen can be moved to any position you fancy, whether its angled over the chassis, lying flat on top of the keyboard like a tablet, or in a regular laptop position. This gives users the license to start scribbling or sketching in a comfortable position and then snap it back in place so they marvel at their handiwork. 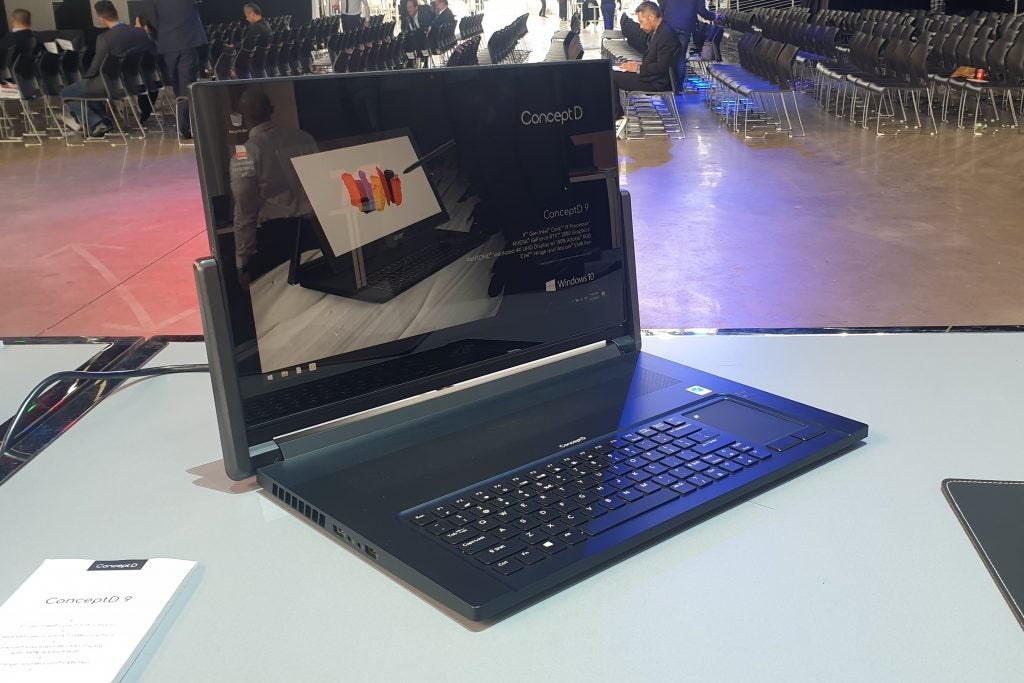 The Acer ConceptD 9 looks a lot like a smarter, more grown-up version of the Predator Triton 900 gaming behemoth

Packing the newly revealed mobile 9th Generation Intel Core i9 processor and a Nvidia RTX 2080 graphics card, this is as powerful as laptops come. Whether you want it for 3D rendering, animation or design work, this portable should do the job without a sweat.

I should say portable with quotations, because at 4.1kg, this is an extremely heavy device. It’s also very expensive, costing an incredibly high $4999. Is it worth the dosh? I went hands-on with the Acer ConceptD 9 to find out.

The Acer ConceptD 9 will be available in Europe from August 2019. North American users will happy to hear they’ll be getting the laptop earlier, with a release date set for this June.

The Acer ConceptD 9 will cost an almighty €4999. That’s a lot of money, but it’s not  huge surprise given the specs and technology stuffed inside this device. Acer is yet to reveal UK pricing for any of its ConceptD devices, but I’ll update this hands-on review once it’s officially confirmed.

US pricing has been revealed though, with the Acer ConceptD 9 retailing for $4999.

There’s no surprise the design is the most noteworthy feature with the Acer ConceptD 9. Its Ezel hinge allows for a lot of movement. I immediately pulled the screen down so it angled over the keyboard, making it a great position to study your work, be it a video or still image. The hinge is surprisingly sturdy too, so if you start scribbling with the Wacom Pen in this position, the ConceptD 9 remains locked in position and unflinchingly still. 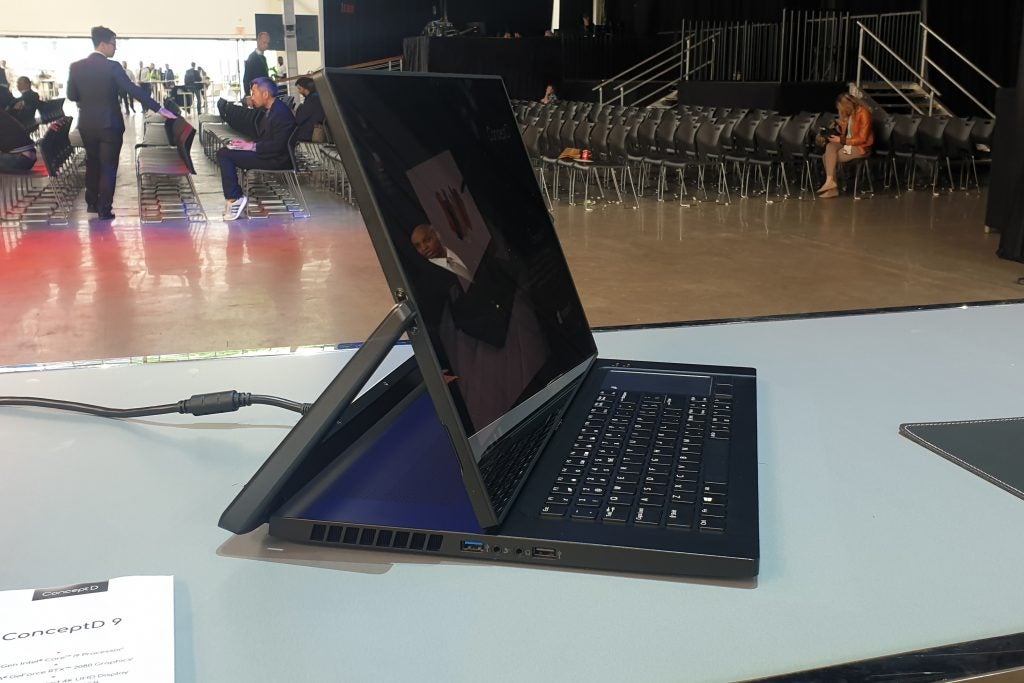 If you need to bring the screen closer to you for sketching or content viewing, then the hinged design lets you do just that

You can also flip the screen so it faces upwards while resting flat upon the keyboard. This essentially turns it into a tablet, making it delightfully convenient to start drawing on the panel with a stylus. It’s really easy to return it to its default laptop design too. Simply lift it up, and it will snap back into place. While it’s impossible to comment on durability after a brief hands-on, it does feel reassuringly solid so I reckon it’s going to take absolutely ages to wear this thing down.

My biggest surprise with the ConceptD 9 is its size. It’s a lot bigger in person than it looks like in press shots. With a 17.3-inch screen and a 428mm wide chassis, this hulking thing is going to take up most of your desk. Plus with a staggering 4.1kg weight, its better to think this thing as desktop substitute rather than a portable device – you certainly won’t be lugging this to and from the office every day. That’s no bad thing though. It’s a essentially a Microsoft Surface Studio 2 rival, but with the added benefit of being portable. 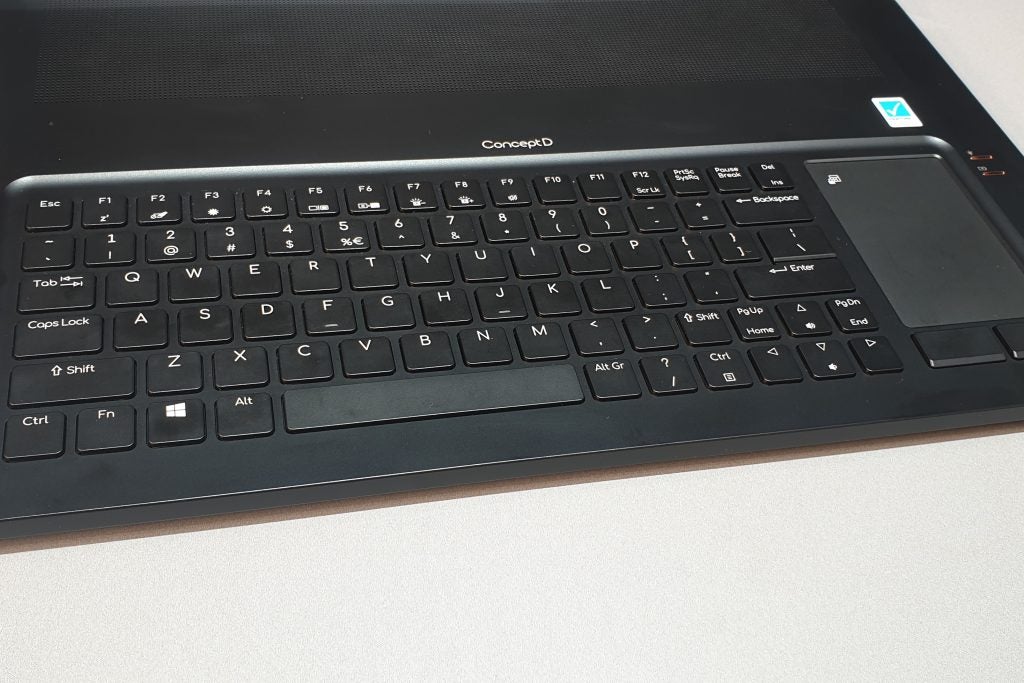 One bizarre design quirk is that the touchpad is found wedged next to keyboard on the right hand side. This has been done to give more space for the cooling system near the top-end of the chassis and so you don’t have the touchpad getting in the way of the screen once its pulled closer. This could well put some people off, but I’m sure people will get used to it eventually.

Being a creative laptop, its also got a staggering number of port options. Thunderbolt 3, USB Type-C, USB Type-A, Ethernet and DisplayPort are all present and accounted for.

The Acer ConceptD 9 boasts some marvellous specs, including Intel’s new not-even-been-officially-announced-yet 9th Generation Intel Core i9 processor. This means the ConceptD 9 should be zippity fast, although I can’t comment too much on performance since I was restricted to a demo experience at Acer’s event. 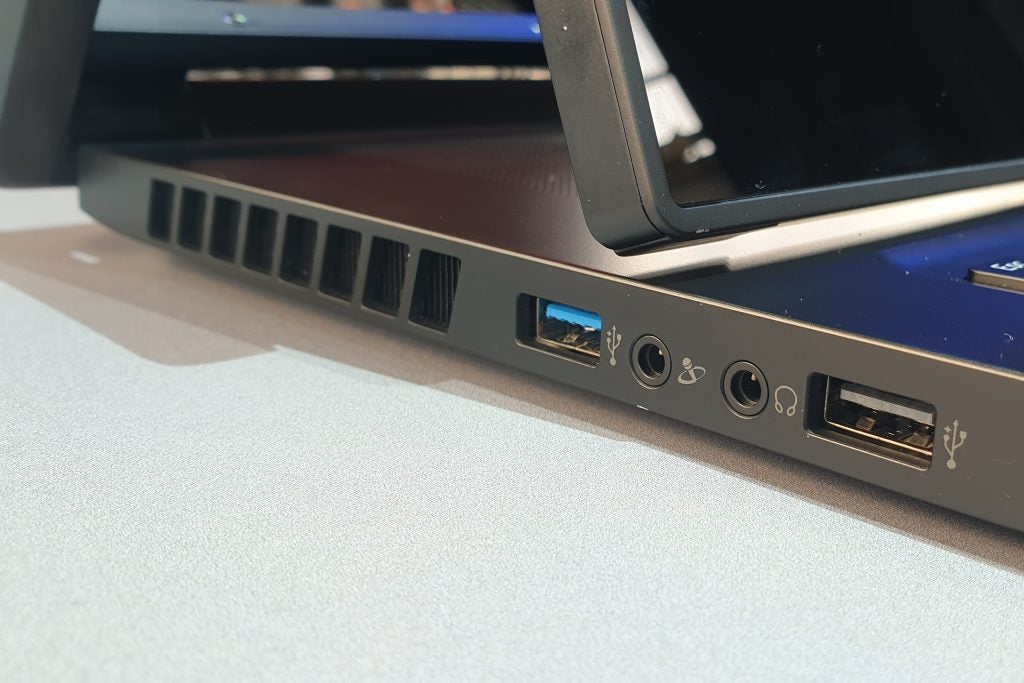 It’s a similar story with the Nvidia RTX 2080 graphics card, which should ably handle the like of animation and design work. If anything, you could argue the RTX card option is overkill, but this is a very high-end laptop we’re talking about here.

The rest of the specs look equally as impressive, with plenty of RAM and generous storage options. In term of actual benchmark results and our verdict on performance, you’ll have to wait for our final review.

Acer made a big deal of the ConceptD 9, especially when it came to colour accuaracy, as the company claimed a Delta E <1 score, which is superior to the MacBook Pro 2018. This means the ConceptD 9 should present photos and images how they look in reality, so there’s no colour distortion or the like.

The 17-inch screen also boasts a 4K resolution, 100% Adobe RGB colour gamut coverage and a peak brightness of 400 nits. That basically ticks every box that a creative could think up.

That said, I wouldn’t rely on these numbers until we’ve tested them ourselves. It’s also important to have a good look at the display, away from all the figures, but this was difficult to do during my hands-on as it was set up as a demo. I did notice a lot of glare on the glossy display, but to be fair it was a very bright room with all sorts of colours flashing around, so in a work environment, this might not be so much of a problem.

I unfortunately didn’t get the opportunity to use the Wacom Stylus on the touchscreen, so I can’t comment on latency or pressure levels yet either. All will be thoroughly tested once we get our hands on a review model though.

Related: Acer 2019: Everything announced at the Next@Acer event

The Acer ConceptD 9 looks to be a heartthrob for designers and professional creatives. It’s got all the specs needed to be a fantastic powerhouse, while that Ezel hinge makes it a curious competitor to Microsoft Surface Studio.

The only issue is the price. That €4999 figure is bank-bashingly expensive, but that’s the price you pay for an ultra-powered portable media savvy. I’ve reservations whether the portability factor is worth the extra cost though, especially since it weighs so much you won’t be lugging it in your rucksack.