The Acer ConceptD 3 offers decent performance and comes with an above-average screen – but the touchpad and keyboard should be better at this price.

The Acer ConceptD 3 is a 15-inch laptop aimed at creative professionals. For those who don’t have the budget for a MacBook Pro 16 or Razer Blade 15 Studio Edition, the ConceptD is a solid enough choice.

The Acer ConceptD 3 provides decent performance per pound, and for power its GPU is far better than that of the much more expensive base MacBook Pro 16. However, the ConceptD disappoints in a few significant areas, including a stodgy plastic trackpad and low-profile keyboard.

The MacBook Pro 16 and Razer Blade 15 Studio Edition set a fresh standard for what portable creative workstation laptops can, or should, look like.

Acer’s ConceptD line carries some, but not all, of the same ideas. It’s reasonably slim and light at 23.5mm thick and 2.35kg considering the powerful components inside. However, it sports a far simpler look.

The Acer ConceptD 3’s screen surrounds are slim and the casing is all-black. There are only brief flashes of deliberate styling. 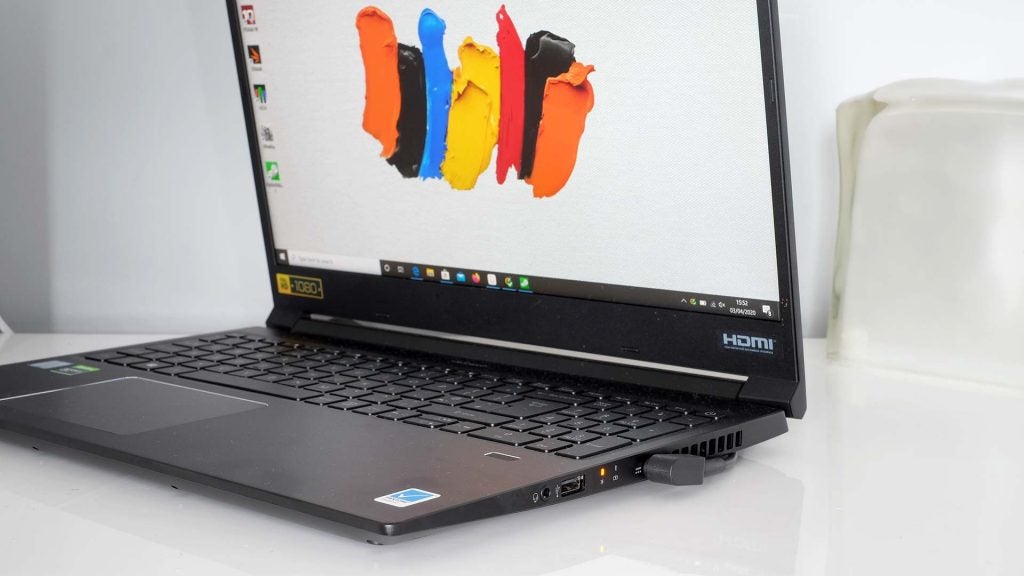 For example, the keyboard backlight is orange rather than white, and the bevelled edges of the trackpad and finger scanner are slivers of bright, bare aluminium against the black canvas. It’s a business suit with a funky pocket square.

In terms of build, it’s a bit of a mix. The ConceptD’s keyboard surround is aluminium, as is the lid. The underside, screen surround and outer parts of the hinge are all plastic.

Next to the MacBook Pro 16, first impressions of the Acer ConceptD 3 are that its appearance is bland; it isn’t what you’d call good-looking. However, its build is solid enough. The keyboard plate flexes only slightly under significant pressure, and the screen remains rigid. 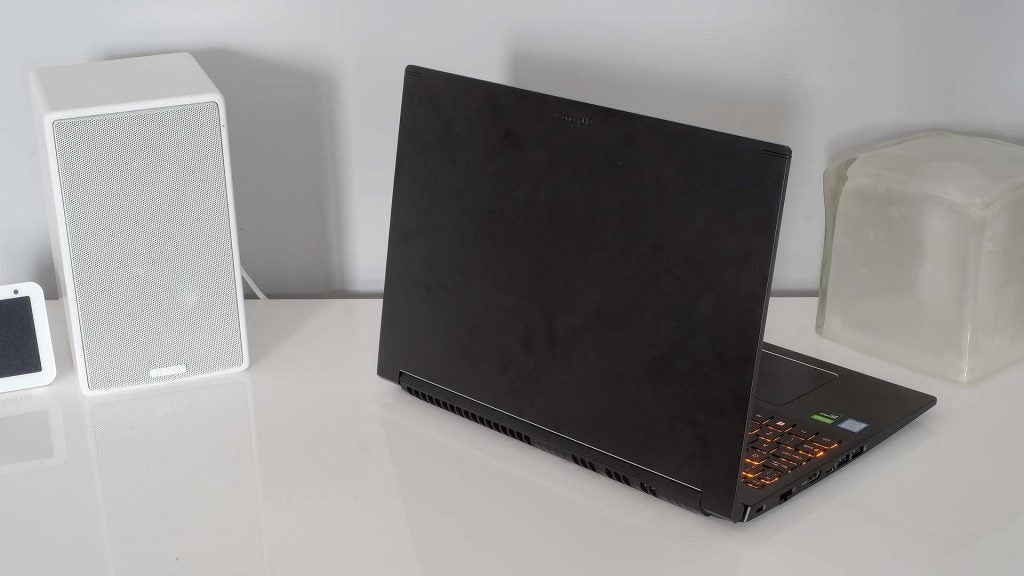 The expectation of such professional performance laptops is that they’ll include a greater number of connections than your average slim and light laptop. Overall, the Acer ConceptD 3 doesn’t disappoint in this regard – but it lacks Thunderbolt 3 port.

Instead, it includes a slower USB 3.1 spec USB-C port, alongside two “old style” USB-A 3.1 sockets. Personally, I’d much rather these than the all-USB-C connectors of a MacBook – but for some, Thunderbolt 3’s 40Gbps speed may be a necessity.

The ConceptD 3 also comes with an HDMI, RJ-45 network socket and a slower USB 2.0 on the side; handy for attaching a mouse. 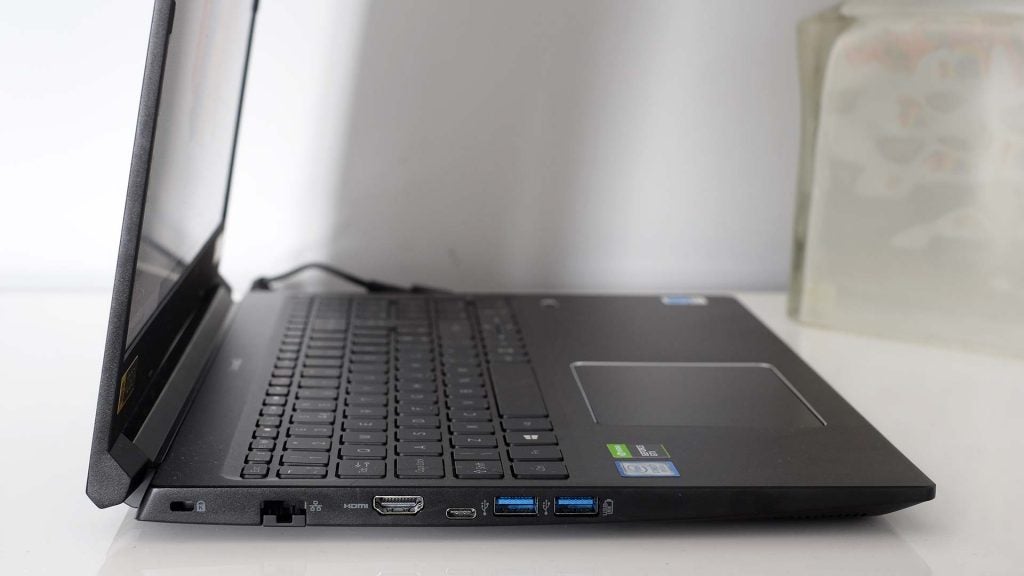 I’d recommend using a mouse with this laptop whenever possible, since not much of the budget has gone into the touchpad. It looks the part thanks to that silver border, but this is a basic plastic pad. I like to see textured glass pads in laptops above £1000.

The pad is an ergonomic nightmare because of the inclusion of a number pad. The pad sits to the left as a result, making it awkward to use. Perhaps number pads still have a place in laptops for spreadsheet-juggling – but in models for creative pros? I’m not convinced, particularly when it has such an effect on your hand positioning. 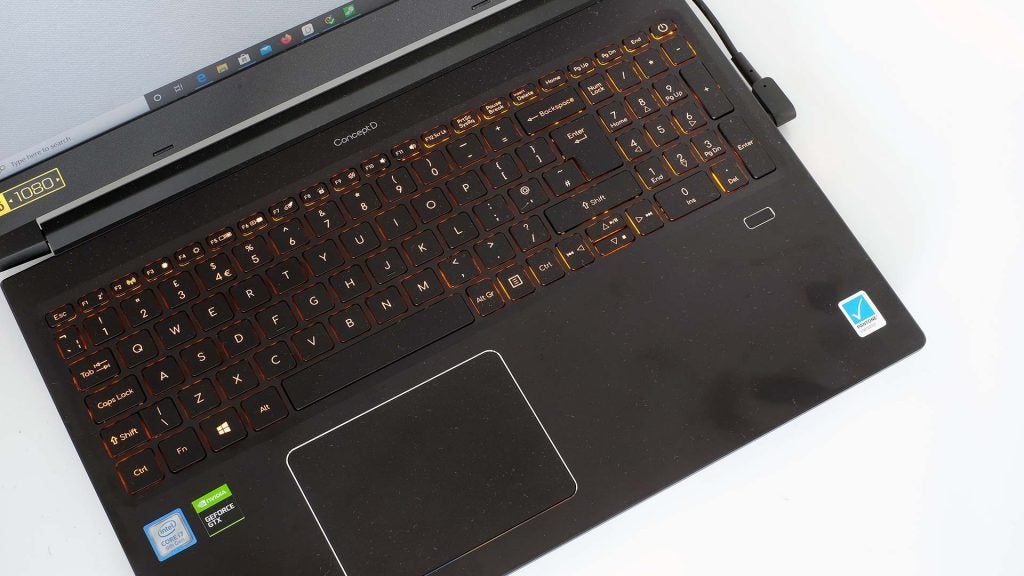 I forced myself to use the Acer ConceptD 3’s default touchpad setup for the first few days, and it was an uncomfortable experience. However, it can be improved by removing the pad’s L/R button zoning, so you can use the entire pad as a left click (this is a standard Windows 10 feature).

The clicker’s action is also quite leaden and squishy, not ideal for Photoshop work. It isn’t crisp or well defined; it just doesn’t feel that good. In use I noticed quite a few phantom clicks registered. Like the zoning issue, you can tweak these out in Windows 10 touchpad settings – but it suggests an under-optimised driver. 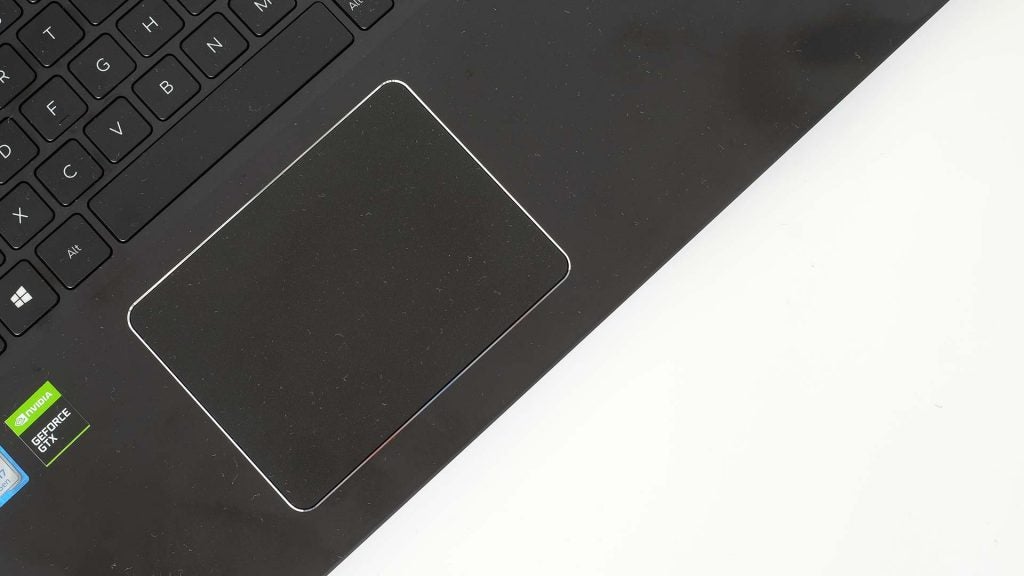 The saving graces of the touchpad are that there’s no pre-click slack to the depress mechanism, and that it’s quiet. So while this touchpad is  well below the standard of those included on some other £1299 laptops, its feel can be significantly improved with a fiddle around in Windows 10’s settings.

I had much less of a tricky time with the keyboard, but it’s far from stellar either. Its orange backlight has no intensity settings; it’s either on or off. And the key action is shallow for a “pro” laptop.

Keys don’t flex under normal typing pressure, but feel perfectly fine after the first few days. But my initial reaction to the Acer ConceptD 3  keyboard was one of disappointment. Its character a bit too light and shallow.

There’s a fingerprint scanner below the number pad, which works well as far as Windows 10 laptop pads go. It doesn’t match those units found in phones, but tends to need a second attempt less often than most.

You can use the webcam for face ID instead. This is a fairly poor 720p camera, which means it isn’t great for web conferencing. However, few laptops have good webcams these days.

The Acer ConceptD features a 1080p IPS LCD panel with “Pantone validated” colour – a seal of approval that indicates colour accuracy should be a notch above those units that come without.

I recorded an average Delta E colour accuracy of 0.15 – a great result, and one within Acer’s own claim of sub 0.2 fidelity.

The Acer ConceptD 3 covers 99.4% of the sRGB colour standard and 97% of DCI-P3, which is the standard gamut of the big movie studios. This is a great result for a £1299 laptop. For those who work with the Adobe RGB standard, the the screen covers 84% of it. 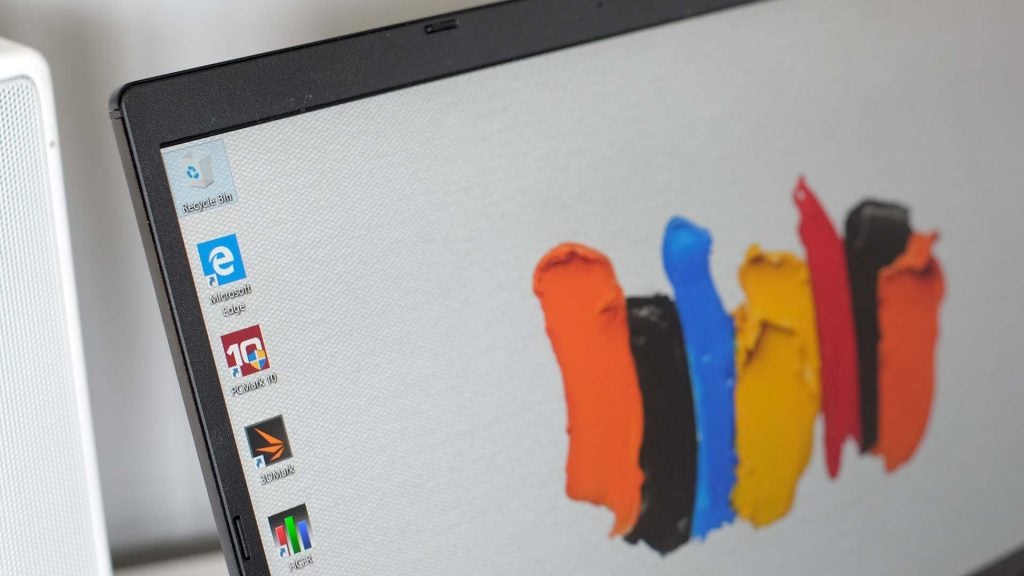 Maximum display brightness of 281 nits is far below that of the MacBook Pro 16 or Razer Blade 15 Studio, and a rather typical backlight power for a 15.6-inch LCD. It isn’t ideal for use in super-bright conditions, although the screen does at least have a reflection-minimising matte finish.

I measured contrast at 1423:1, which is excellent for an IPS LCD panel. And unlike some slightly fluffier laptops aimed at creative types, the Acer ConceptD 3 doesn’t have a touchscreen. 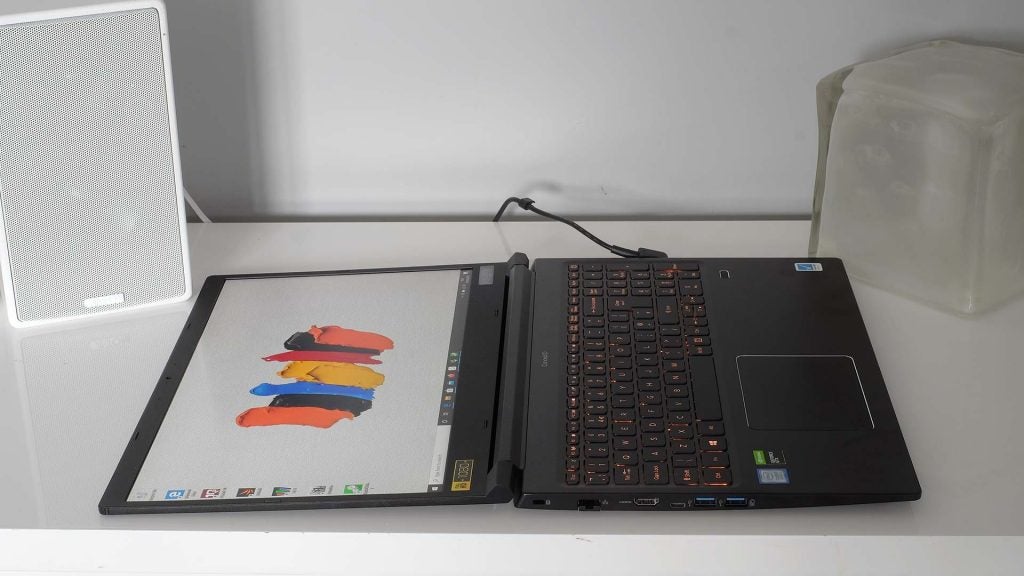 Acer ConceptD 3 performance – Can handle most tasks, but noise can be an issue

This particular version of the Acer ConceptD 3 (CN315-71 SKU) is interesting in that it’s a “pro” laptop that doesn’t include a “pro” graphics card – it comes with a standard gaming model instead.

An Nvidia Quadro-series GPU is the more common choice for a graphics workstation. But the GTX 1650 and Quadro T1000 (the obvious alternative) are both based on the Turing architecture and use CUDA cores. Neither have Tensor cores optimised for ray-tracing.

The performance of the GTX 1650 sits between the Quadro T1000 and T2000, and offers better raw 3D performance for your money; but a Quadro is still the obvious pick for certain pro applications. Quadro-specific drivers for certain industry-standard CAD/ modelling packages mean the T1000 will outperform the GTX 1650, despite being far less powerful on paper. 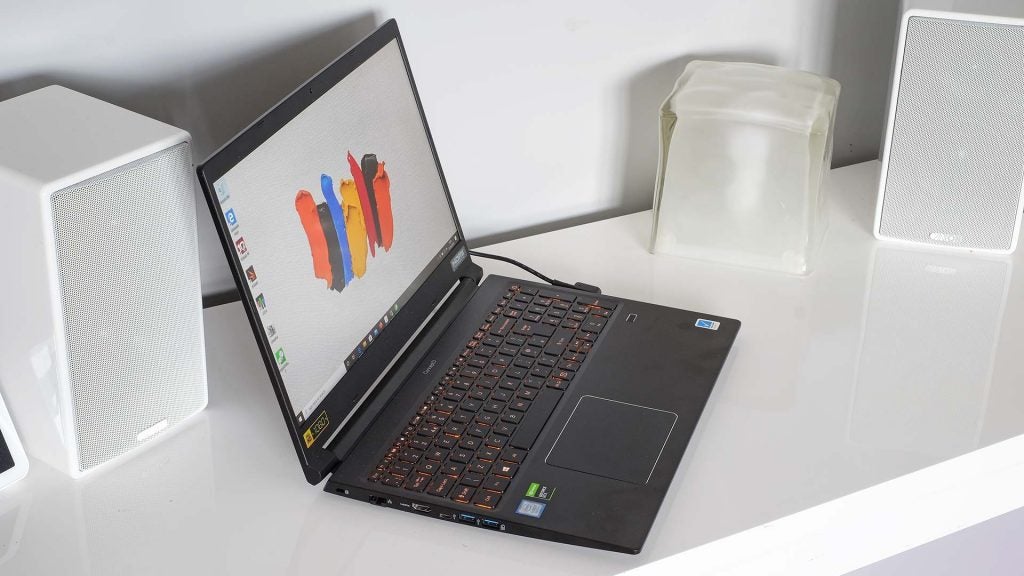 Applications such as Siemens NX, Catia and SolidWorks run far better with pro graphics cards. Wireframe rendering is superior with a Quadro than a GeForce GTX card, no matter how long you spend looking at their Nvidia CUDA core counts (these are the building blocks of Nvidia’s GPUs).However, for dabblers, video editors and those who work with photos, the Acer ConceptD 3’s Nvidia GTX 1650 should suffice.

It’s also a good card for Full HD gaming. Middle-earth: Shadow of Mordor runs at an average 71.22fps (Ultra graphics) and Shadow of the Tomb Raider 44fps (Ultra graphics). Triple-A 4K gaming is a write-off at this level; you’ll need to pay a lot more than £1299 to get that sort of performance in a laptop in 2020.

The processor – the Intel Core i7-9750H – is extremely powerful. It’s a six-core, 12-thread CPU designed for demanding tasks. This processor is also the very same model used in the MacBook Pro 16. The Acer ConceptD 3’s own heat management is only okay. You’ll notice that the fan will begin spinning intermittently, even while tackling light work loads. Its speed tends to cycle up and down whilst doing so, which makes its noise more apparent, and more distracting.

I also noticed the metal part of the case above the ConceptD’s keyboard would become warm after light work. No surprises here: Apple did a better job at handling this CPU’s heat creation.

The ConceptD includes a slower SSD than the best performance laptops. It’s a 512GB drive with read speeds of 1743MB/s and writes of 1446MB/s. That’s fast, but 1000MB/s below the speed of the fastest around at present.

The Acer ConceptD 3 comes with a standard-size battery. Acer hasn’t published the Wh ratings for this model, but does claim it lasts “up to 12 hours”. This is a very long time for a laptop with an Intel Core i7-9750H CPU.

In our tests, the ConceptD didn’t last that long. No surprises there; most manufacturer battery claims are way off the mark. I used this laptop as my work PC for a few days, writing and researching online. It lasted around 4hrs 20mins – which is far closer to the standard duration of a performance-led computer.

Taking the strain down, I set it to stream video. In this capacity it survived 5hrs 35mins. That’s a solid indication of the longest time you can expect the Acer ConceptD 3 to last without dimming the screen dramatically and doing little more than tapping into the Notepad app. 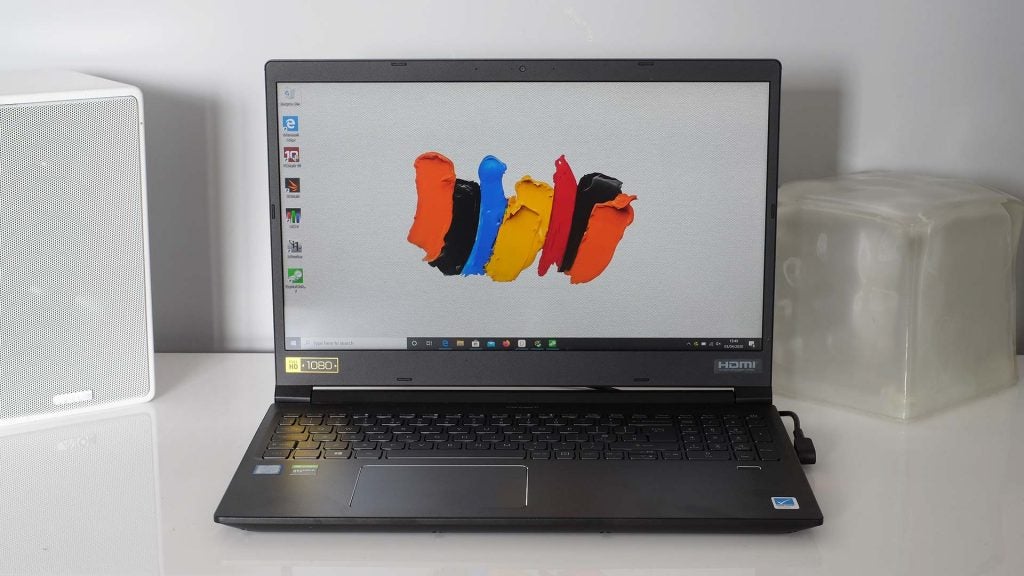 Should you buy the Acer ConceptD 3?

The specific version of the Acer ConceptD 3 (CN315-71) reviewed here works well for those who want to dabble in creative work and play games on the side. Its display colour is well above average, but this laptop doesn’t include the kind of pro-grade graphics card that excels at wireframe modelling.

This is good news in terms of general performance-per-pound, since Nvidia Quadro cards are specialised and expensive. They will not appear to be a good deal unless you actually use them for the jobs for which they’re designed. CAD designers should consider the CN315-71P configuration instead, which includes a Quadro T1000 for £100 more.

However, this also pulls the focus back to the essentials. The Acer ConceptD 3 has a disappointing trackpad, no Thunderbolt 3 port, and its keyboard could do with longer key travel. Performance is impressive thanks to the high-power CPU, but this laptop is a little more ordinary than it at first appears.