The Acer Chromebook Spin 514 (2021) has seen a boosted performance thanks to AMD's new chip, making this a seemingly great all-rounder ChromeOS laptop at a very attractive price point. Although there's no escaping the fact it looks a little bland compared to more expensive options.

The Acer Chromebook Spin 514 (2021) was announced at CES 2021, and while it’s hardly going to steal the spotlight from robots and self-driving cars, it’s still a very fascinating device in the laptop world.

This is one of the first Chromebooks of the year flaunting the new Ryzen 3000 C-Series mobile processors, as AMD hopes to propel the performance level of Chromebooks to a standard competitive with ultrabooks twice as expensive.

Acer kindly sent me a ‘marketing sample’ of the Chromebook Spin 514 (2021) to check out and, while my time with the laptop was limited and I was unable to conduct any benchmark tests, I was still able to mess around with it enough to form some initial impressions.

So check out my hands-on below, as well as everything else you need to know about the Acer Chromebook Spin 514 (2021).

The Acer Chromebook Spin 514 will launch in February for the US and in March for the UK.

The Chromebook will have a starting price of £499/$479.99, although that price will inflate once you start to upgrade the specs. 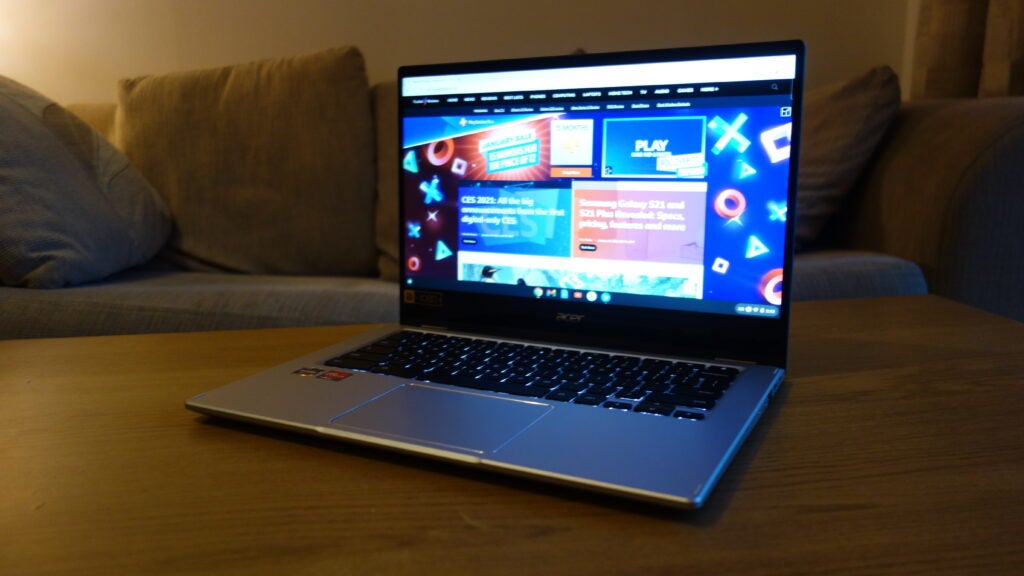 There used to be a time, not too long ago, that I’d groan if handed a Chromebook. They were a poor substitute for a proper Windows laptop with sluggish processing speeds and clunky designs that were a handicap on productivity.

The Acer Chromebook Spin 514 (2021) seems to be a leading example that those times are behind us. Featuring AMD’s new Ryzen 3000 C-Series mobile processor (specifically designed with Chromebooks in mind) this Acer Chromebook looks to boast significant performance gains on its predecessors.

Acer sent me over a sample to have a closer look, although the company did stress that I’m not allowed to conduct any benchmark tests since this is just a marketing model that won’t reflect the true performance of the final product.

However, I did spend some time flicking through web pages via Chrome and watching a few minutes of various Netflix shows, and everything loaded in a breeze with no noticeable slowdown. This is just the Ryzen 3 configuration too, with Acer offering models that climb as high as Ryzen 7 for an added performance boost.

I’m not talking about high-end ultrabook performance here like the Dell XPS 13 or Surface Laptop 3, but from what I’ve seen so far, I don’t think you really need anything more powerful than what this Chromebook offers when sticking to basic day-to-day tasks.

Of course, I’ve only been able to spend a few hours with this laptop and it is just a marketing sample, so it’s far too early to make any sweeping judgements. That said, I’m impressed with what I’ve seen so far.

I’m also unable to comment on the battery life at this stage. Acer claims the Chromebook can last up to 10 hours, but manufacturers have a habit of exaggerating the stamina so I advise some scepticism until our final review. 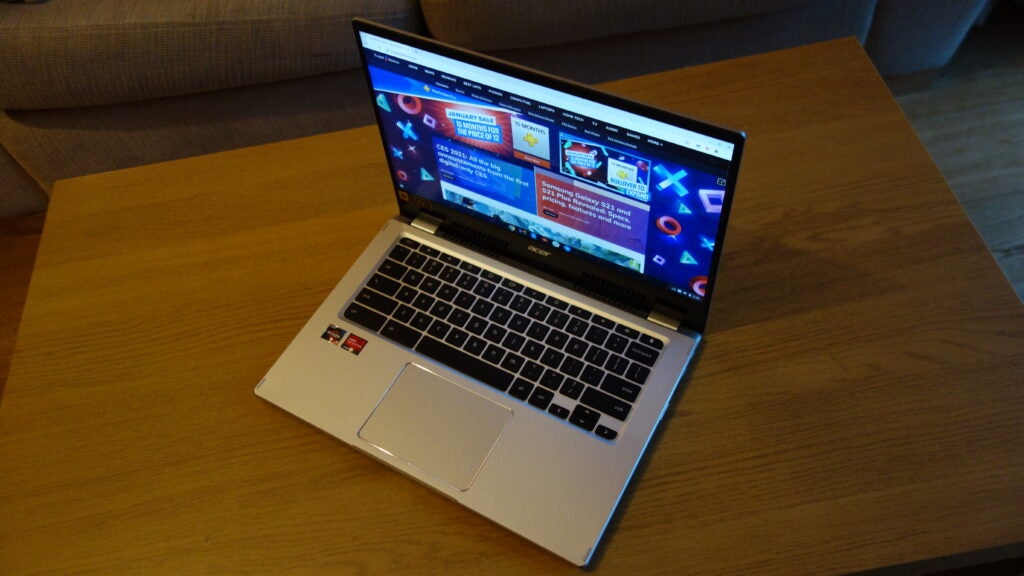 I’m equally impressed with the Chromebook’s design. The chassis feels durable and sturdy, while the bezel surrounding the screen has been squeezed down to adhere to modern trends. It’s incredible how a thinner bezel can drastically improve the visual appeal of a laptop.

The overall laptop design doesn’t look very flashy though, and can be accused of looking bland next to the likes of the Galaxy Chromebook 2 or Google’s PixelBook Go – the Acer is very much crying out for a splash of paint that isn’t silver or black.

On the plus side, the 360-degree hinge allows me to flip the laptop into a tablet mode, with ChromeOS instantly snapping into horizontal or vertical mode depending on how I’m holding it.

There’s no bundled stylus here, and the 1.55kg weight causes a slight strain to my wrist when holding it with one hand as I would a tablet, but I nevertheless appreciate the versatility. Propping up a laptop into ‘tent mode’ is great for watching the likes of Netflix after all. 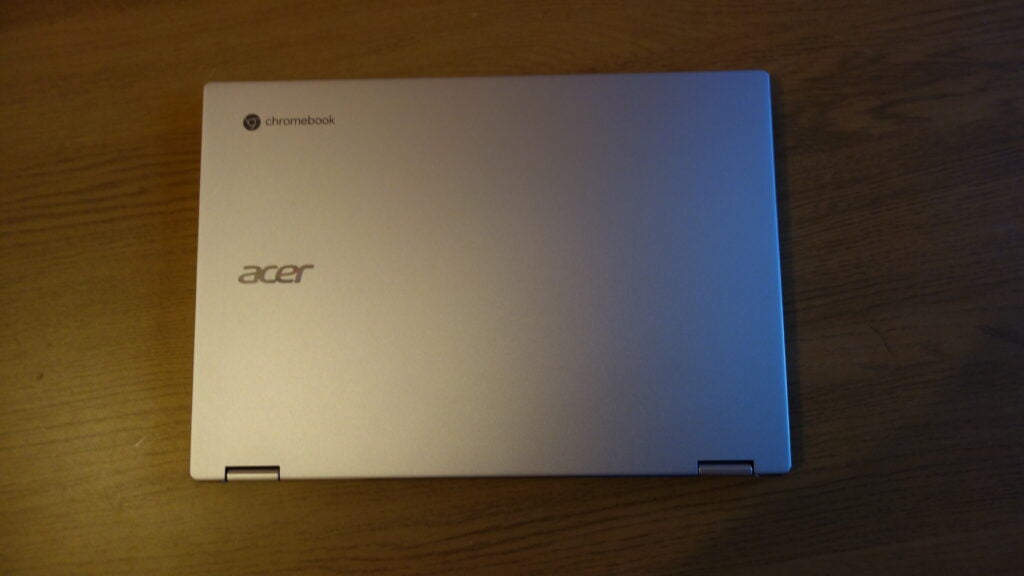 On the subject of Netflix, I’m really impressed with the 14-inch touchscreen display so far. Acer has opted for an IPS panel, which does a wonderful job at showing off vivid colours at various viewing angles.

Despite featuring a Full HD resolution, the image quality isn’t quite as clear as detailed as a high-end ultrabook. Netflix series Bridgeton appeared a tiny bit grainy for example. That said, the screen of the Chromebook Spin 514 is still superior to the majority of Chromebooks I’ve tested and perhaps the best I’ve seen yet at this price point.

The keyboard is excellent too, with concave keycaps making it more comfortable to prod each key. There’s a satisfying click to each key without being loud enough to irritate colleagues.

I’m typing out this hands-on on the keyboard right now, and I’d happily write several more, with the Chromebook showing great potential for both students and office workers. The keyboard’s backlight is not available with every configuration though, which is a shame. 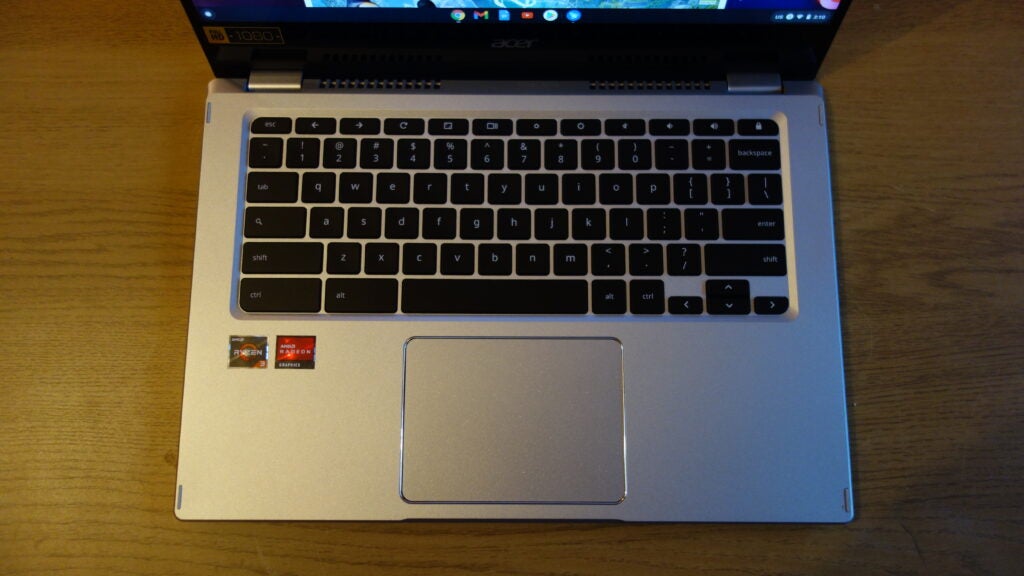 There’s also a surprisingly generous number of ports here, including the ultra-versatile USB-C, USB-A, headphone jack and a MicroSD card slot. HDMI is also included for the Ryzen 5 and 7 models, but cheaper configurations sadly miss out.

The Spin 514 is also limited to Wi-Fi 5 support, with most modern laptops moving onto Wi-Fi 6, but the majority of owners probably won’t notice the omission.

I’m quietly impressed by the Acer Chromebook Spin 514 (2021). There’s nothing about it that’s particularly exciting, but the introduction of the Ryzen 3000 C-Series mobile processors is a huge milestone for Chromebooks since you’re seemingly getting a nippy performance at a budget-friendly price.

The Spin 514 is solid in almost every other category too, proving to be a very attractive option at the quoted £499/$479.99 starting price. While the existence of the slightly more expensive Surface Laptop Go is certainly problematic, the Chromebook Spin 514 has enough selling points (namely its 14-inch Full HD display) for it to remain a worthwhile alternative.

Of course, since I’m unable to benchmark the performance or test out the battery life it’s far too premature for me to recommend this laptop, but it’s certainly giving me all the right signals at this early stage. Check back to Trusted Reviews in the coming weeks for full review and final verdict.