What is the Acer Chromebook R13?

Costing around £400, this laptop/tablet is a cheap and cheerful device that’s designed to tackle the basics with minimum fuss. You get streamlined access to Google Docs, Gmail and the Chrome web browser, alongside a handful of Android apps from Google Play, too.

If you’re a student or anyone on a tight budget who just needs to get some writing done (and not much more than that), then the Chromebook R13 will likely be just the device you need.

Be warned, though: it isn’t a powerful device, so don’t push it. Plus, since it’s dependent on a wireless internet connection, the level of performance will be determined by the strength of the Wi-Fi in your office/dorm/work area/Starbucks. 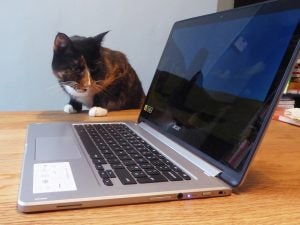 Acer’s Chromebook R13 is cut from very similar cloth to most other Chromebooks – that is, a skinny, lightweight plastic frame with metal accents.

Both the top and the underside of the Chromebook R13 sport a metal finish that’s cool to the touch, and lends the laptop a degree of prestige. Inside, it’s plastic of a similarly silvery hue, but decidedly less premium-looking.

While the Acer Chromebook 13 is quite compact (15 x 326 x 228mm), I was pleased to see that this didn’t equate to a bonfire of connectivity. There’s USB-A, USB-C, HDMI and a microSD card slot on the left, plus 3.5mm headphone jack and maglock on the right. Weighing in at 1.5kg, it’s a little more hefty than most laptops of this size, but it certainly isn’t a back breaker. 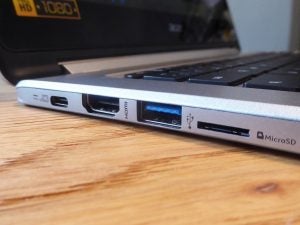 I noticed that our review unit had picked up a couple of nicks in transit, so I’m not confident about how pristine the Chromebook 13 will continue to look two years in. As with most lightweight laptops, I’d recommend picking up a protective case or a laptop bag with padding – and a screen protector, too.

Like the Acer Chromebook Spin 11, the R13 is reversible. You can open it, push that screen all the way back and turn it into a tablet. Or, from closed, push it 290 degrees and have it stand up on your desk in what Acer calls ‘display mode’.  Unlike the Spin 11, there’s one large hinge here, as opposed to two smaller ones.

As a tablet, it works well enough. However, it feels a little weird in your hands, as you’ll feel the keys depressing on the other side. Similarly, if you’re going to flip the screen around so that its in display mode, then be aware of the surface on which you’re resting it. 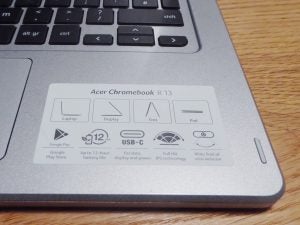 Keys on the Chromebook R13 have about 2mm of travel and are light and springy to the touch. It’s an odd sensation – one that isn’t entirely comfortable, but not unpleasant either.

What is slightly concerning is the degree of flex that comes with that plastic chassis. The whole board depresses slightly as you type, something that’s especially noticeable when your fingers are on the home keys. While touch typing is a breeze, you might want to go easy on this thing.

Chromebooks are still relatively new to the market, and it might take some time for you to become accustomed to their layout when coming from the standard Windows and Mac setups. More or less, the keyboard functions as you’d expect. Despite the springiness in the centre, it’s easy to type on for hours at a time.

The trackpad doesn’t suffer from quite so much flex and responds well to commands. Out of the box I felt that it was actually too responsive, so I had to reduce the sensitivity a notch before I felt comfortable.

The only real moan I have about the keyboard is that it isn’t backlit, which means working in a gloomy press room, study area or a corner of a library could prove tricky. 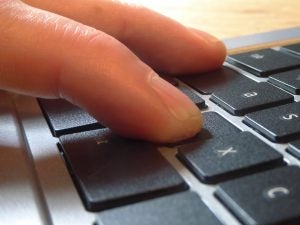 The 13.3-inch display has a native resolution of 1920 x 1080, but it’s set to 1536 x 864 by default. It can be cranked up to 2400 x 1350, if you wish. At this extreme it’s virtually impossible to read text, so we wouldn’t recommend this setting if you want to get any work done. But high-definition video looks excellent at this resolution, especially when you toggle full-screen mode.

Since it’s an IPS-type screen, viewing angles are decent, with only slight discolouration at the edges when two of you are trying to watch Netflix in bed.

Colorimeter tests were impressive, returning a colour temperature of 6495K, which is fractionally warmer than the 6500K sweet spot. While you won’t want to do any detailed photo editing on the Chromebook R13 as a result of the hardware limitations, this at least means any photos and video you sync to your Google Drive will look more natural than they would on an overly warm or cool screen.

Maximum brightness levels were just under 200 nits (196.1), while at its darkest, the panel dipped down to 0.89 nits. Those are pretty sub-standard levels. 300 nits of brightness is the ideal minimum, with 500 nits being the holy grail. Combined, those maximum light and dark levels add up to a not-exactly-brilliant contrast ratio of 220:1.

As such, night-time and dark interior scenes of video content will look gloomy – late-night Netflix and iPlayer sessions certainly did for me. 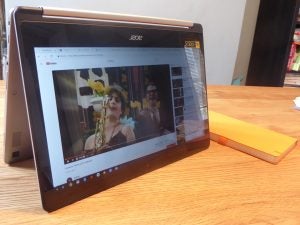 The R13 is a Chrome OS laptop, and therefore a workhorse designed mainly around Google’s free office suite, Google Docs, Gmail, and the Chrome web browser.

Powering everything is a 2.1GHz quad-core MediaTek M8173C CPU, with a 1MB cache and 4GB of RAM.

For the kind of work you’ll be doing on the Chromebook R13, this will provide more than enough power. Overall performance feels smooth and stable and, aside from when we were trying to get 4K video files to play and zoom in on high-res photos, we didn’t encounter any instability or stuttering.

Due to a lack of comparable benchmarking tools available, it’s hard to provide a baseline for comparison with other similarly priced and specced Windows laptops.

With Kraken, a simple JavaScript-based benchmarking tool that measures web browsing performance, the Chromebook R13 scored 3949, which is slightly better than the 3736 recorded with the Chromebook Spin 11. 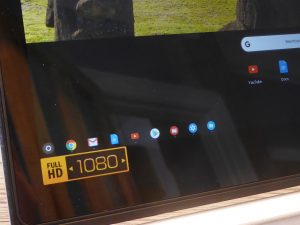 Considering much time on this laptop will be spent browsing the web via Chrome and using Google Docs, that’s a good indicator of how this will compare to other Chromebooks, but not much else.

In terms of third-party apps, Google Play provides access to tools such as Slack and Skype, so if your contacts and colleagues prefer using these to Google Hangouts, you’re golden.

At a push, we even found it was possible to do some basic photo editing on the Chromebook R13 with apps such as Google Photos and Pixlr. Don’t expect to be able to do more than simple cropping and resizing, however; if you want a laptop for intensive editing, look elsewhere.

On paper, you get 64GB of storage, but from fresh that’s actually closer to 45GB. Since the majority of your work will likely be stored in your Google Drive, this won’t be an issue. However, you’ll want to sync files with your Google Drive at some point, and here overall performance will be dictated by the quality of your internet connection.

If, for example, you’re trying to access a bunch of 1080p and 4K video clips shot with your Huawei P20 Pro on the Chromebook R13, and you’re doing so over crummy, congested, coffee shop Wi-Fi, expect things to move at a crawl. The Chromebook R13’s Wi-Fi module is an 802.11ac unit that supports beamforming, meaning if your home and office routers are relatively modern, things should move at a much nicer pace.

Overall, I’d say that a good watchword for Chromebook use is patience; don’t try to do more than a couple of things at once, and you’ll be fine. 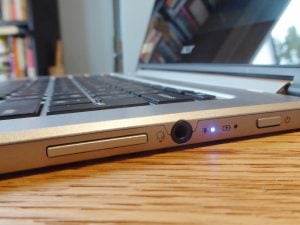 There are four speakers on the Chromebook R13, one on each side south of the keyboard, and two on the underside.

When in upright laptop mode, the sound is squashed and muffled, thanks in part to a lot of the low end being absorbed by the desk, table surface, your lap, etc.

Sound is best when the Chromebook R13 is upright in ‘tent’ mode, as the base speakers aren’t impeded and you get to actually hear more of what’s being blasted at you.

In general, though, audio isn’t that great. Mid-range sounds are nice and clear, but if you fully crank up the volume,  the Chromebook R13’s high end and bass limitations become apparent.

Things are far better when listening to music through headphones. Unlike the Spin 11, the 3.5mm jack doesn’t have any wonky connectivity issues. 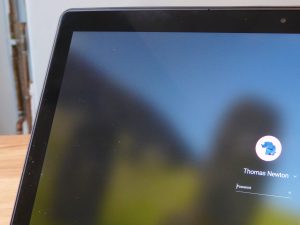 With the screen set to 150 nits of brightness, we were easily able to get a day’s use from the Chromebook R13, connected to Wi-Fi networks at home and at the office. Following a typical day’s use, we’d have about 20-30% of power left in the tank; after five hours, we’d have around 50-60% left. When streaming video, we got around eight and a half of playback, which is plenty enough for box-set binges.

This is typical of what we’d expect from a Chromebook with a relatively low-powered CPU. It’s unlikely that you’ll be asking anything too demanding of it, so battery life should be respectable. 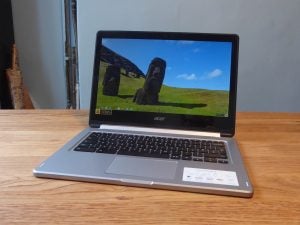 Why buy the Acer Chromebook R13?

If you want a laptop solely for word processing, whether that’s for school/college/university essays or whatever, and you’re happy to get to grips with the various quirks of Chrome OS, then the Acer Chromebook R13 will satisfy. It offers great performance for a reasonable price.

Much of the time, the Chromebook R13 was able to deliver in terms the work I needed to get done. A lack of a decent photo editing apps means that I wouldn’t swap this for a Windows laptop for day to day use, but if you only need to write and file essays and articles, this will suit you fine.

It’s not a high performance machine at all, so if you want to tinker with photos or play games in between work and streamed content, you should consider getting something like the Lenovo IdeaPad 720S.

The R13 costs about £80 more than the Chromebook Spin 11. For such a relatively small price increase, not only are you getting something that’s physically bigger, but it also has more ports and a slightly better battery, too.

Bringing a good Full HD screen and solid performance to the table, along with decent battery life, the Acer Chromebook R13 will happily suffice for students and those needing a device for basic day to day tasks.