The Acer Chromebook 315 is an excellent laptop for the price, capable of completing basic tasks without a hitch. The CPU performance, battery life and keyboard quality are far behind the standard of more expensive laptops, but that’s not really an issue if you’re sticking to the likes of casual web browsing, video streaming and basic apps

Chromebooks have long promised smooth performances and high-end designs at a budget price, but few manufacturers have actually delivered. That changes with the Acer Chromebook 315.

The Acer Chromebook 315 is an incredibly cheap device – retailing for £269.99 –  but it feels and looks like a laptop three times more expensive.

There are of course limitations such as the locked-down Chrome OS opposed to Windows and the Intel Pentium Silver processor that lags far behind flagship laptops. But Acer has managed to balance out all of these features to deliver a laptop capable of running basic day-to-day tasks without a hitch.

The Acer Chromebook 315 features a basic design. It’s nowhere near as impressive as more premium Chromebooks such as the PixelBook Go, but simultaneously looks and feels far superior to the plastic clamshells that once dominated the Chromebook market.

The slim aluminium casing feels smooth and sturdy. There is some noticeable flex if you push the chassis down, and some screen wobble if you give it a shaking, but nothing that really concerns me. The 15.6-inch version weighs 1.8kg. That’s fairly hefty, but you can still just about lift it up with one hand, albeit with some wrist strain. 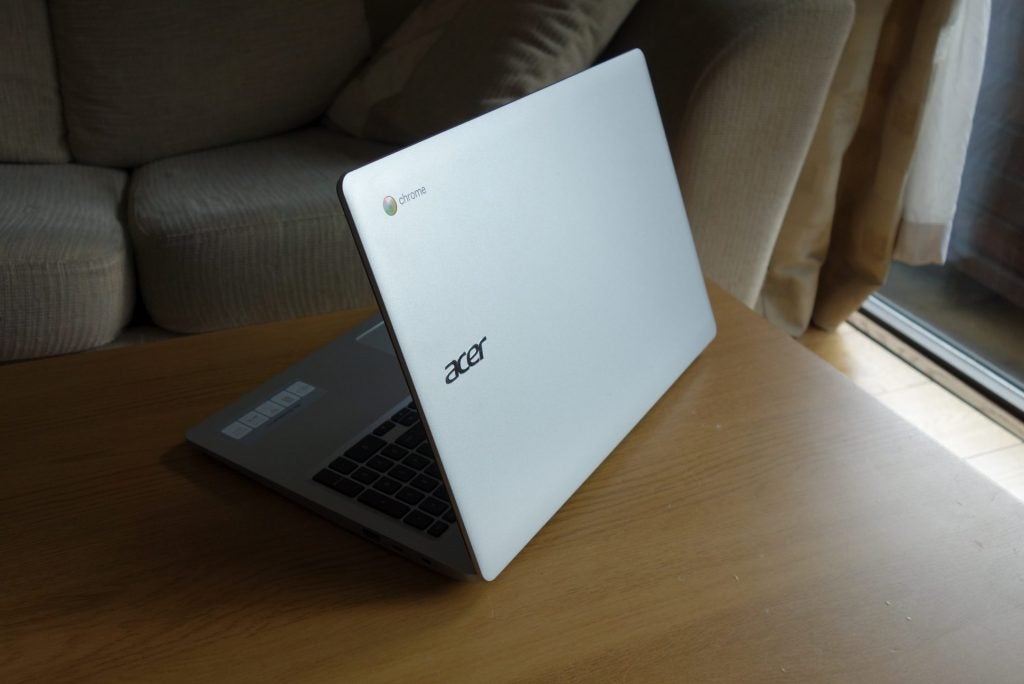 The black plastic bezel surrounding the screen is relatively chunky, but not to the extent that the Chromebook 315 looks ugly. Despite having a touchscreen, the Chromebook’s hinge can only be folded back to an 180-degree angle, so you won’t be able to use this as a tablet replacement.

The Acer Chromebook’s speakers can be found on the bottom of the laptop, which unfortunately does mean audio sounds a bit muffled when blasted into your desk. Despite the tinny quality and terrible bass, the speakers still proved adequate enough for Spotify playlists and video playback, especially since the volume can be cranked up to a loud decibel level. 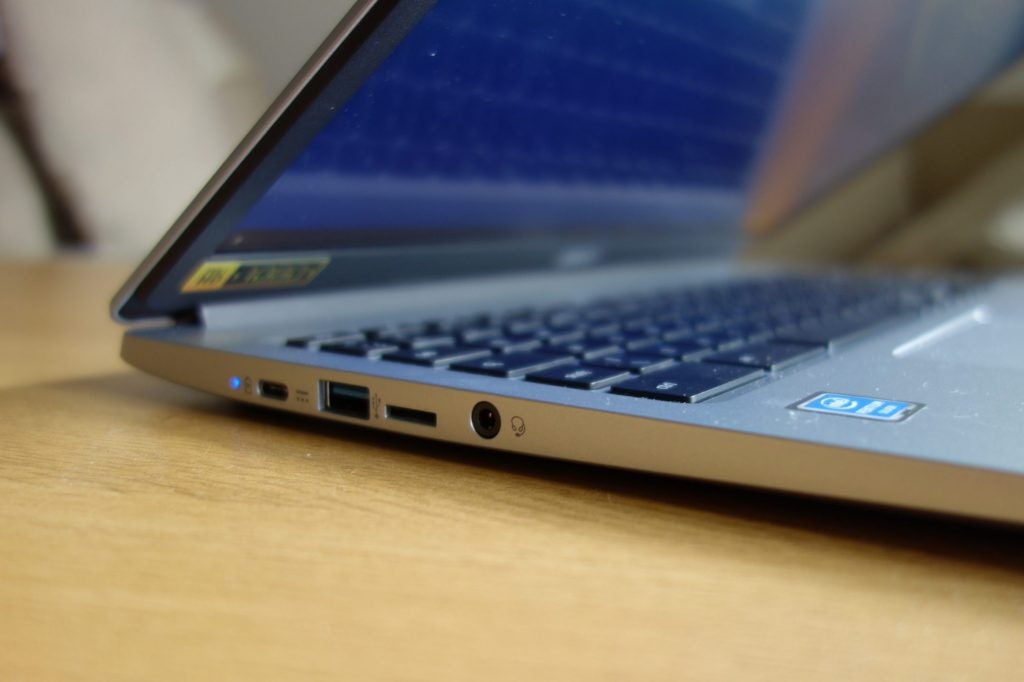 Connectivity is excellent with the device including 2x USB-C (one for power delivery), 2x USB-A, headphone jack and a microSD card slot. There are a number of modern omissions such a fingerprint scanner and support for Thunderbolt 3, but they can be forgiven considering the super-cheap price.

A webcam can be found above the screen with a green light notifying you when it’s active. The video quality is grainy, but it’s still good enough for work meetings and friendly video chats.

The Acer Chromebook 315’s keyboard is one of its weakest features. While key travel is decent, the keys feel noticeably spongy resulting in an unsatisfactory typing experience. There’s no backlight here either.

There are some oddly placed keys too, particularly the ‘delete’ key being adjacent to ‘backspace’, resulting in some infuriating mistakes when touch typing. The enter key is also smaller than usual, which I’m not a fan of. 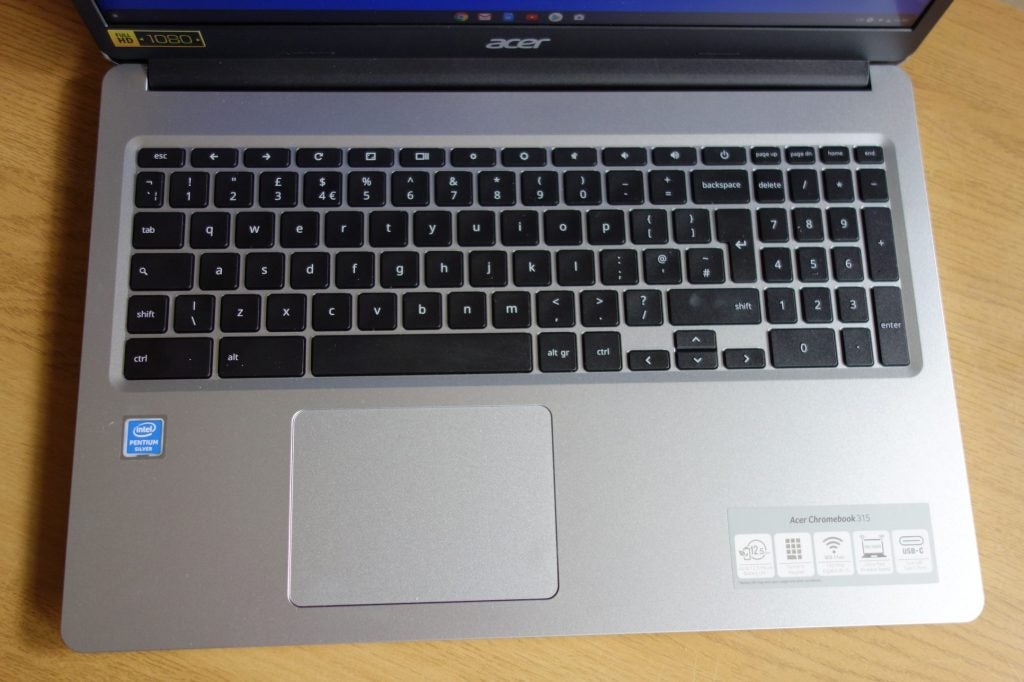 Being a Chromebook, there are some noticeable key differences to Windows laptops here too, including the lack of a ‘Caps Lock’ key. Instead, the Acer Chromebook 315 has lots of browser-focused keys, including hotkeys for ‘refresh’ and ‘search’.

The trackpad performs as well as you’d want it to, with fantastic sensitivity and an audible click when pushed down. However, having the trackpad positioned off centre is a bizarre design decision.

Manufacturers usually look to cut down on the costs of the screen when producing a budget laptop, and while that has clearly been done with the Acer Chromebook 315, the quality remains high enough to comfortably watch Netflix and YouTube content.

The Acer Chromebook 315 sees a huge 15.6-inch LCD screen with a Full HD resolution. Chromebooks aren’t usually this big, but it’s really handy to have the extra screen space. Contrast is decent enough with a 1102:1 ratio. The likes of The Witcher looked perfectly fine on the Acer Chromebook, even during gloomy scenes where other budget laptops may struggle. 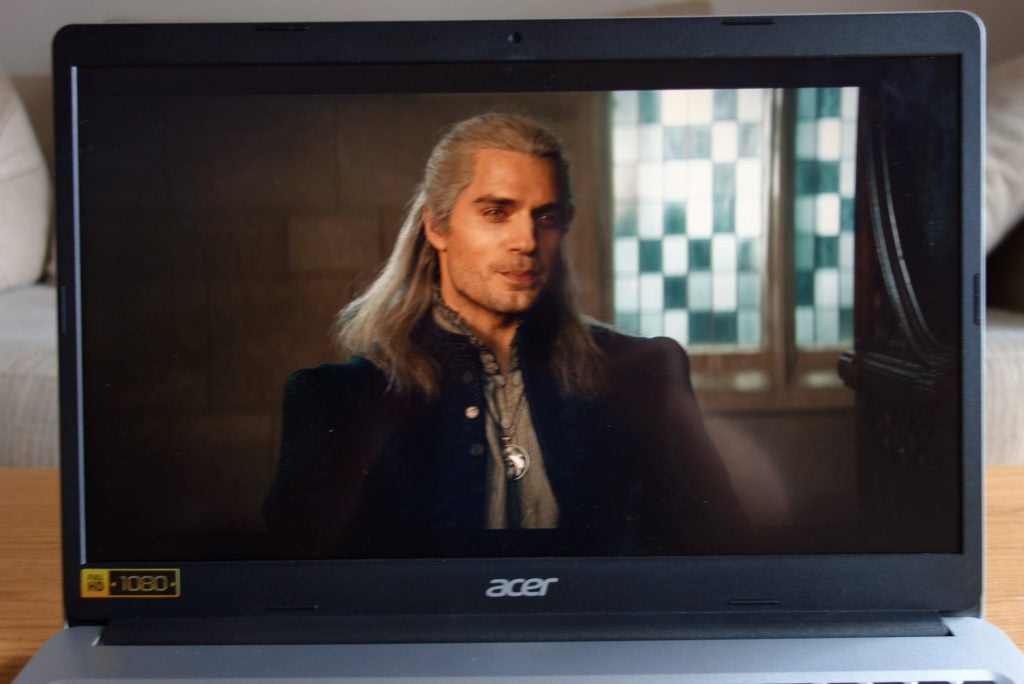 My biggest issue with the Chromebook 315 screen is the noticeable red tinge due to a below-normal colour temperature. It’s only really an issue with white backgrounds, but I spend a lot of time with Google Docs so it was hard to ignore.

The max brightness is also pretty low at 261 nits, which means sun glare can make it difficult to see the screen in sunny environments.

Colours aren’t very accurate – nowhere near the required standard for professional creative work – but that’s not really an issue for casual use. For a Chromebook at this price, the screen is as good as you could hope for.

The Acer Chromebook 315 processor comes in two flavours: AMD and Intel. The former seems to be a lot more common after doing a quick search online, but it’s roughly the same price as the Intel configuration that I have in for review so I don’t expect them to vary in performance drastically.

Either way, the Acer Chromebook 315 is not a powerful machine, ranking pretty low down in our Geekbench 5 benchmark tests. It’s important to remember that this is an incredibly cheap laptop though, so should only be judged on basic tasks such as web browsing and video streaming.

When using the Acer Chromebook 315 as my normal work machine, it comfortably handled word processing and web browsing without any slowdown. Then I decided to push it further by playing music via Spotify while opening 10 Google Chrome tabs – still no slowdown, aside from a few images that took an extra second or so to load, but it was hardly a problem.

I also saw no issues running YouTube and Netflix, proving this is a perfectly suitable Chromebook for video streaming. I’m sure there are apps on the Google Play Store that will make it struggle, such as games or photo-editors, but if you stick to the basics then this laptop should run fine.

Of course, the only reason Acer has been able to ensure such a smooth performance is because it’s using Chrome OS instead of Windows, which means you have to accept some compromises. Firstly, you can only really download Google-approved software, and while Chrome OS has matured over the years to build a comprehensive library, you’ll still likely be out of luck if you want to download some obscure software. 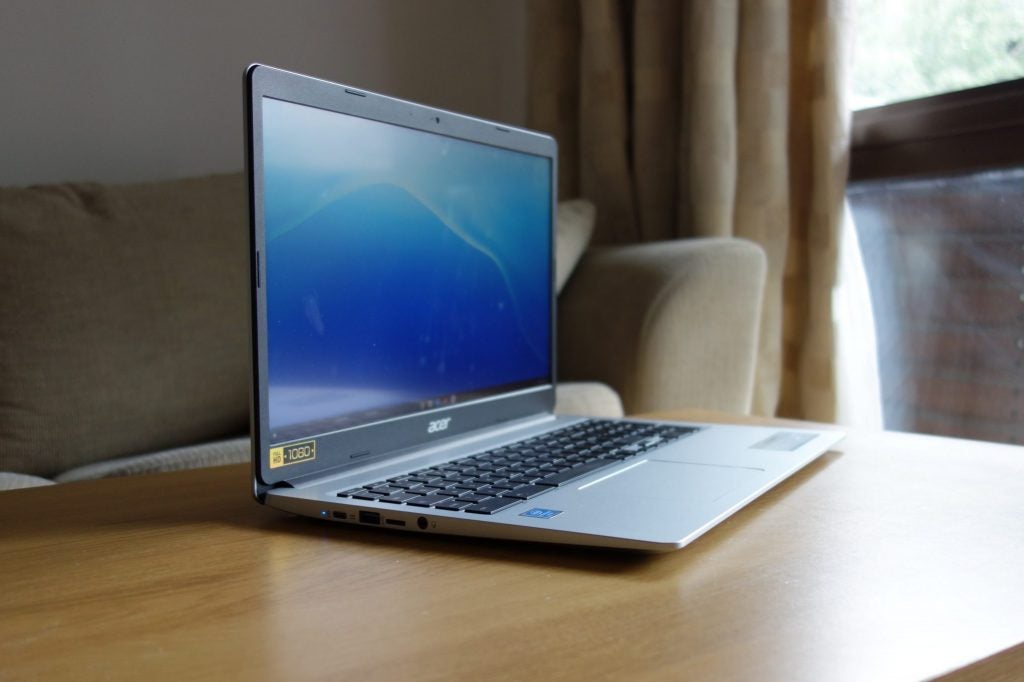 A lot of popular games are ruled out here too, including Minecraft and Fortnite. Google Stadia is a good workaround for gaming, but it currently has a small library and you’ll need a strong internet connection for a good performance. Otherwise you’re limited to the likes of Angry Birds and Clash of Clans.

To buy an alternative laptop running on Windows though, you’ll need to spend twice as much. If you’ve no intentions of pushing your laptop further than basic browsing and video streaming, then the Acer Chromebook 315 is a perfectly adequate option.

Acer claims the Chromebook 315 sees a battery life of up to 12.5 hours, which surpasses the 10-hour mark that most laptops and Chromebooks aim for. However, our own battery benchmark tests show very different results.

After conducting our own standard battery test (turning brightness down to 150 nits and looping a video) the Acer Chromebook only lasted 5 and a half hours. That’s a pretty poor result, and means you won’t get through the work day without needing to plug it into the mains.

Coupled with its unwieldy size and weight, this isn’t an ideal Chromebook for the on-the-go work. But if you’re planning on using it at home or in an office where a mains is always within reach, then the poor battery life shouldn’t be an issue.

Should you buy the Acer Chromebook 315?

The Acer Chromebook 315 is a great option for those on a budget, with the Intel model costing just £269.99. With a 15.6-inch screen, it’s a great option for video streaming and gaming via Google Stadia and is powerful enough to run basic applications smoothly.

Since it runs on Chrome OS, you are getting a restricted operating system compared to Windows. There are other shortcomings too, including a disappointing battery life, spongy keyboard and a performance only really suited to basic apps and workloads.

But when you consider the cheapest Windows laptop with a decent performance will cost you more than £500, then there’s no doubt that the Acer Chromebook 315 represents fantastic value – just as long as you’re content sticking to web browsing, video streaming and basic apps.