What is the Acer Chromebook 15?

While most Chromebooks are a bit on the dinky side for perfect portability, Acer’s latest Chrome OS effort is a proper beast, designed to live happily on a desk and occasionally be carried around the home. With the catchy full title of Chromebook 15 CB515-1HT, this 15.6-inch laptop serves up Full HD visuals and impressive usability. And all for a low asking price, you’ll be glad to hear.

Chrome OS is a simple affair, compared with the likes of Windows. If you’re happy to work in a browser, using services such as Google Drive, then you’ll enjoy the simplicity of Google’s operating system. You can download Android apps as well, although the majority aren’t designed for a laptop screen and setup, so your mileage may vary. 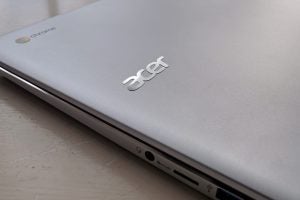 Many of the Chromebooks that I’ve tested in recent months have been on the compact side, such as the Spin 11 (which can convert into a tablet on demand) and Google’s own lightweight Pixelbook.

The Chromebook 15 bucks this trend completely, with a meaty 15.6-inch chassis that’s more reminiscent of Acer’s affordable Windows laptops. This machine breaks the scales at almost 2kg, so you’ll certainly notice when it’s stashed in your knapsack. If you can even get it in there, that is. Thanks to the 38cm width and 26cm depth, I only just managed to squeeze this notebook into my biggest backpack. 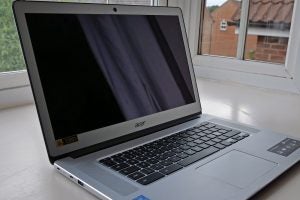 Like the Acer Chromebook 14 before it, this notebook sports a silver design that’s not too far off Apple’s MacBook stylings. Of course, as this is a budget-friendly laptop, you don’t get a premium metal chassis. All the same, the Chromebook 15’s plastic frame feels sturdy: it wasn’t too bothered at being chucked in a bag and generally knocked around. I couldn’t find any obvious flex points or weak spots, while the chunky lid does a good job of protecting the display.

Despite the beefy build, connectivity is pretty much bog-standard. You get a pair of full-sized USB 3.0 ports and a couple of Type-C USB ports, split between the two sides for an easy life. Besides that, all you get is a microSD memory card (for expanding the 64GB of storage) and a Kensington lock slot. There’s no dedicated video output, although you can always hook up a monitor or TV using one of those Type-C ports. And, as usual for a Chromebook, you don’t get any Ethernet. 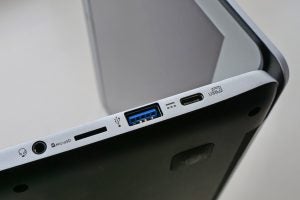 A 720p webcam is housed above the screen and it’s fine (just fine) for chatting online with cohorts. You can generally expect a dull and grainy image when sat indoors, while at night, I seemed to transform into a pale-faced ghoul. At this price point, I wouldn’t expect anything else.

The Chromebook 15’s biggest strength is its usability.

While that chiclet-style keyboard seems kind of squashed in the middle of the laptop’s frame, it’s actually a great size for fast typing. The keys are perfectly spaced and the board itself is pleasingly firm, with comfortable travel. I really enjoyed smashing out scripts, emails and this very review on the Chromebook 15, touch-typing a storm from the moment I started using it.

Even the cursor keys, which are normally always crushed up on these machines, are afforded enough room to avoid frustration. And, as usual, you have a row of dedicated Chrome OS shortcuts at the top of the keyboard. Sadly, there are still no media controls beyond the volume up/down/mute buttons. 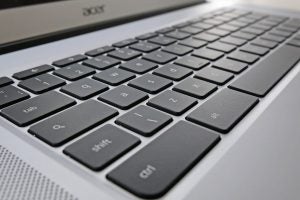 I was surprised to find that the Chromebook’s touchpad was actually pretty good also. It’s spacious enough so that you don’t have to constantly lift your finger, while pushing the bottom half to select something doesn’t send the cursor skidding across the screen. A double-tap of the pad acts as a right-click and I found that my multi-touch gestures were handled well.

All the same, you can ignore the touchpad altogether and simply poke and prod the touch-sensitive display instead. This is a Chromebook after all. 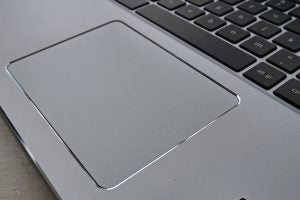 That 15.6-inch IPS touchscreen is rather good for the asking price. For one, the touch controls work well. You can zip through webpages and documents quickly and easily, while selecting text is a doddle. The display also supports multi-touch, for pinch zooming – although for some reason this never worked when I was messing around inside of Google Docs in the Chrome browser.

Viewing angles are rather narrow, as the picture darkens once you tilt the screen away from your face. Thankfully the Chromebook 15’s hinge allows you to tilt the display all the way back, 180 degrees, until the lid is touching your desk. So you shouldn’t have any trouble finding a comfortable working position, unless you’re crammed into a tiny train or plane seat. 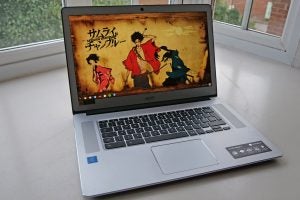 As for picture quality, I was impressed by this budget model. The Full HD resolution ensures that photos and video look nice and crisp, with plenty of detail on offer. Colour reproduction is typical for a simple Chromebook – vibrant photos don’t exactly pop, but the range is solid. Just don’t expect accurate hues for the purposes of photo editing and whatnot.

The sheer size of this laptop means that Acer has been able to position its dual speakers either side of the keyboard, rather than shoved away beneath the Chromebook. They throw out some quite powerful sound, certainly in terms of volume. Even when watching Netflix outdoors, right next to some particularly obnoxious building works, I had no trouble making out every word. 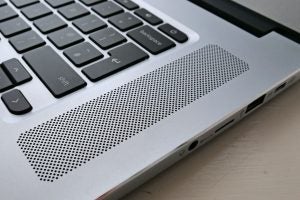 Of course, it’s no great surprise that the audio quality isn’t quite up to snuff for music. On top volume, rock and dance music sounded like a crackly cacophony. You’re much better off plugging in headphones.

Acer has stuffed an Intel Pentium N4200 chipset into the Chromebook 15, backed by 4GB of RAM. This proved to be absolutely fine for playing around with several apps at once. You can stream HD video at the same time as messing around in a web browser and messaging mates with no sign of a slowdown. 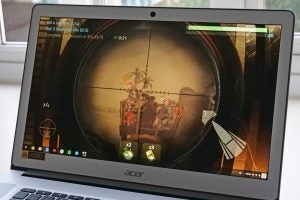 Games such as Cover Fire and other recent action titles play with a smooth enough frame rate, although using a Chromebook to play games designed for phones isn’t an optimal experience. Using a laptop touchscreen to play something that’s meant to be held in a hand is simply clunky. All the same, you’ll have no trouble with gentle-paced puzzle games and the like, but proceed with caution.

While the Chromebook 15 behaved itself for the majority of my time with it, it did completely lose the plot on one occasion. After four hours of non-stop use, the screen suddenly began flickering and warping. Rebooting the laptop thankfully resolved the issue and that little incident wasn’t repeated, although I was slightly on guard from then on. 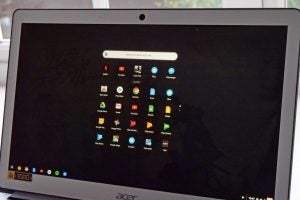 I wasn’t entirely convinced by the battery life reporting of the Chromebook 15. For instance, the laptop would drain just 15% in one hour, according to the Chrome OS meter, and then suddenly plummet by 25% the next hour. All with the same basic usage.

Overall I found that with mixed use (mostly working in a web browser while streaming music), the Chromebook usually survived for around six hours from a full charge. That’s on medium screen brightness too. In other words, if you’re going to be taking this machine on the road all day, you’ll need to plug it in at some point. 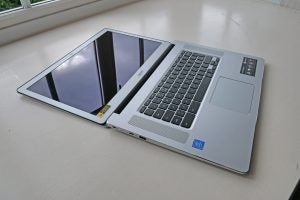 I also tried closing all apps except for Netflix and then streaming video non-stop, to see how the battery would cope. In this case, I managed to get just over seven hours of straight boxset bingeing done before the Chromebook died. Not a bad effort, although some of the smaller Chrome OS laptops offer an extra two or three hours on top.

Should I buy the Acer Chromebook 15?

If you’re after a Chrome OS machine to carry around all day, then the Chromebook 15 is far from the best choice. Acer and rivals such as Asus have launched plenty of Chrome notebooks that are more compact and considerably lighter – while this laptop’s battery life is also easily beaten.

Still, as a simple device for the family to share, the Chromebook 15 is perfectly fine. Strong usability means staying productive and browsing the web are a breeze, while the Full HD screen is good enough for kicking back with a movie. As long as you don’t mind the limitations of Chrome OS, and you don’t take it out much, there’s plenty to enjoy here. 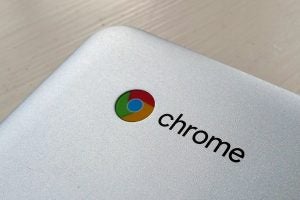 The Acer Chromebook 15 is a basic family laptop that’s best left at home, unless you know you’ll be able to keep its battery topped up wherever else you’re working.