Google’s web-based Chrome OS is at the heart of the C720 like every other Chromebook, so everything you do is tied to a Google account. It doesn’t cost you anything and it’s as simple as setting it up on an Android phone. Once you’ve used signed in with an existing account or created a new one, it’s time to get familiar with a desktop largely free from applications. Everything is based inside the Google Chrome browser. On the taskbar you’ll find the app launcher and shortcuts to the Google Chrome web browser and GMail.

Additionally, you can drag apps from the launcher straight onto the taskbar. There’s plenty of Office-style applications like Google Docs (Microsoft Word-lite) and Google Sheets (Excel-lite). Crucially, to get the full functionality you need to be hooked up to a Wi-Fi connection. Without the internet, the C720 like other Chromebooks is pretty useless, so it’s worth keeping that in mind.

As an operating system, it still has some growing to do specifically in the app department. The Chrome Web Store is improving, but big apps like Skype and Sky Go are still missing in action. A quick glance at the most popular apps category and Spotify’s web player is now supported and Microsoft’s SkyDrive is included, but Google’s own applications still dominate the storefront. Google has now added sections dedicated to apps for offline use like Google Keep, Pocket and games like Spelunky. The catalogue still significantly lacks in comparison to the Mac App store or even Google Play. 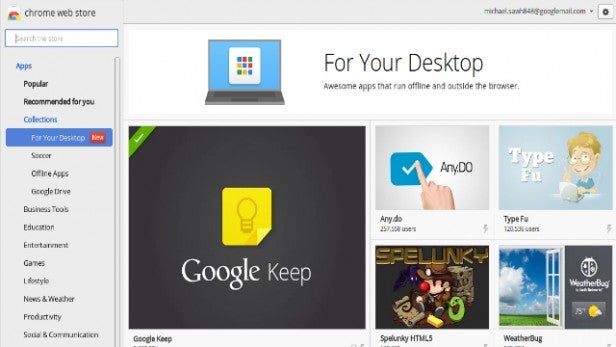 The good news is that with such a streamlined operating system, the Haswell-based 1.4GHz Intel Celeron 2955U CPU with 2GB of RAM is more than capable of keeping things running nice and smoothly. Unlike the first generation of Chromebooks, it handles running multiple tabs at the same time with ease. The boot-up times are nice and quick and it jumps back onto the Wi-Fi swiftly. Everything is geared towards the cloud so the 16GB of flash storage is not going to last long, but there is 100GB of free cloud storage with Google Drive that lasts for two years to tap into instead. 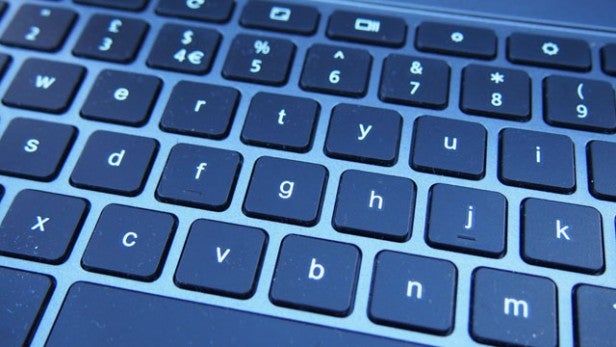 At first glance the keyboard looks around the same size as the one featured on the Samsung Series 3 but the keys are actually smaller just enough to make it more of a cramped area to type on. The Caps Lock and Delete keys have gone having been included in the C7 as well. The CTRL and ALT keys have reduced in size and even the direction keys feel squeezed into the body. The keyboard does offer decent travel, it’s just the smaller nature of the layout that will take some adjusting to.

It’s a more frustrating experience with the Touchpad, though. There’s smooth surface is free of buttons and is based on feeling your way to the left and right sides to replicate the buttons on a mouse. Responsiveness is not great and we found ourselves having to constantly re-swipe to scroll around web pages.