A couple of weeks ago we looked at Acer’s neoTouch S200, its latest high-end handset that features a ferociously quick 1GHz processor and a high resolution screen. The E101, however, sits at the other end of the scale in the firm’s new line-up of smartphones. You can pick it up online for around £165, which makes it the cheapest Windows Phone currently on the market. Obviously, to build a handset for that price Acer has had to make some significant compromises, but the question is, has it made the right choices in which areas of the phone to scale back? 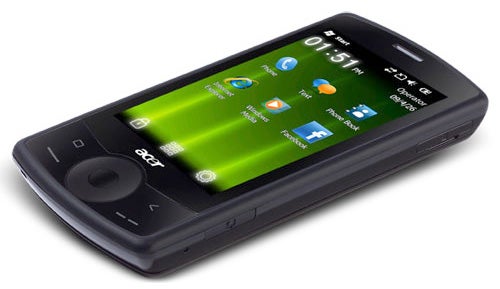 Certainly in terms of looks, the E101 doesn’t give off the air of a budget handset. Sure the body is made from plastic and doesn’t feel quite as sturdy as the iPhone or Nokia E52, but apart from the slightly flimsy battery cover it’s actually quite well built. It measures 113 x 56 x 12.8mm and weighs 118g, plus it’s pretty stylish, too, thanks to its clean angular lines and glossy black finish. And we like the way it’s not laden down with unnecessary buttons like some of the models in Acer’s previous range. On this one, you simply get a power button at the top, a volume rocker and lock switch on the left-hand side, and a button for the lowly 2-megapixel camera on the right-hand side. There’s even a stylus tucked away along the left side.

This is all pretty traditional stuff, but the controls on the front are a definite change from the norm. Instead of the usual four-way D-pad, the E101 has a touch scroll wheel. This acts much like the touch wheel on the iPod Classic, so gliding your finger around it moves up and down through the various menus. And as it’s also clickable, you can use it as a standard four-way D-pad if you want. Overall, we think the touch wheel works really well and is especially useful when you’re trying to navigate menus one handed. Along with the wheel there also the usual four Windows Phone buttons: Home, Back and two soft keys. Although these initially look like touch buttons, they’re actually traditional buttons, but as they’re very responsive this isn’t an issue.


Acer has kitted the handset out with a Qualcomm MSM 7225 processor that’s clocked at 528MHz. It’s similar to the processors that HTC has been using in its Windows and Android phones over the last year or so. While it’s obviously not in the same league as the 1GHz Snap Dragon CPU Acer uses on the high-end S200, it’s no slouch either and the handset felt reasonably sprightly to use. On the memory front, there’s 256MB or RAM and 512MB of ROM. Naturally, you can also add more storage space by sliding in a cheap microSD card into the slot hidden behind a small plastic flap on the right-hand edge of the phone.

So far so good, but unfortunately from here on in the E101 really starts to go off the boil. The most obvious failing is the 3.2in touchscreen, which really is shockingly poor. The resolution is quite low at 240 x 400 pixels, but we could accept this on a budget phone if it wasn’t for the fact that you can actually see the black lines between the horizontal and vertical pixels. It’s been a long time since we’ve seen grid structure on an LCD display, but sadly it’s very visible here. What’s more, onscreen colours are a tad subdued giving the display a rather drab look. And if this wasn’t enough the liquid crystal response rate also seem to be very low as you can see ghosting on the screen around icons and text when scrolling quickly. 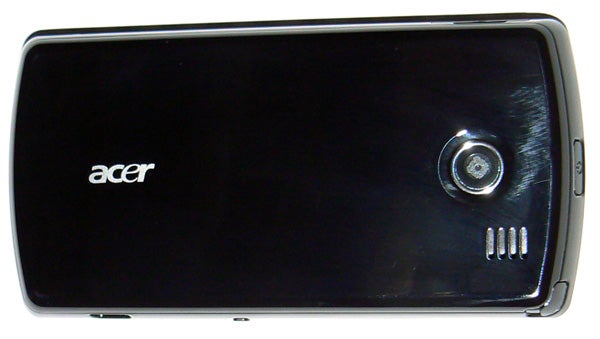 The phone’s connectivity is also shockingly poor. In an age when most manufacturers have long moved on from 2G handsets, the E101 is holding out against the tide of technology. This leaves you with just GPRS and EDGE for web browsing and picking up email. And what’s worse is that there’s no Wi-Fi support either, so you really are totally reliant on EDGE or GPRS for all data transfers. As a result, browsing is always a horribly slow experience and even though Acer has included a dedicated YouTube application it’s pretty much useless as there’s simply not enough bandwidth available on mobile connection to play video back without constant, long pauses for buffering.


Also, although the phone has onboard GPS, it was very slow to lock onto satellites even after we had downloaded the extra data that’s meant to speed up the process. This makes us think that Acer has probably used an older GPS chipset.


It’s a shame as there are other areas where the phone performs quite well. For example, its call quality was good, with crisp audio from the mic and callers sounding very clear on the loud earpiece. The speakerphone isn’t bad either, as long as you don’t push it all the way to full volume, as at this level it starts to sound a bit harsh and brittle. 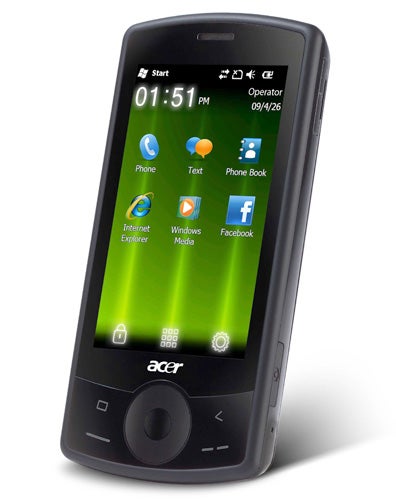 Battery life was pretty much in line with other, more expensive, Windows-based handsets. We got just under two days from the E101 – enough for a decent amount of calls and a fair bit of web browsing and GPS usage. The phone has a mini-USB port for charging and syncing rather than the micro-USB port that’s set to become standard over the next year or so. This port also doubles as the headphone jack for the supplied stereo headset, since there’s no standard 3.5mm headphone jack on the E101, unlike the higher end S200.


The supplied headset doesn’t sound too bad, although it is lacking a bit in bass and even when you try to compensate for this using the Windows Media Player equaliser the results still leave you wanting in the low frequency department.


While the Acer beTouch E101 looks like quite an attractive handset on the surface, unfortunately when you dig beneath you find it’s just lacking too many features that we now take for granted on smartphones.