Accustomed as we are to the almost bewildering rate of price cuts in the LCD world, it takes quite a deal to raise our eyebrows these days. But they’re well and truly raised right now, we assure you, thanks to Acer’s AT3720: a 37in LCD TV that’s yours for the astonishingly small sum of £800. But with previous TV efforts from traditionally PC brand Acer failing to inspire, will the cut-price AT3720 really turn out to be the bargain it first appears?


It’s rather drab aesthetically, that’s for sure. The dull grey of the speaker section, desktop stand and outer trim looks bland and feels plasticky, while the matt black of the screen frame lacks the lustre and robustness of the average LCD glamour boy.

There’s rather less to complain about on the set’s rear, though, as we find an unexpectedly well-stocked connections panel. Particularly reassuring is the presence of two HDMIs. But there’s also component video input for hooking up a progressive DVD player or analogue HD sources like an Xbox 360, along with a complement of two Scarts, a D-Sub PC input, and an RF aerial input. The only obvious disappointment is the lack of a dedicated four-pin S-Video input. 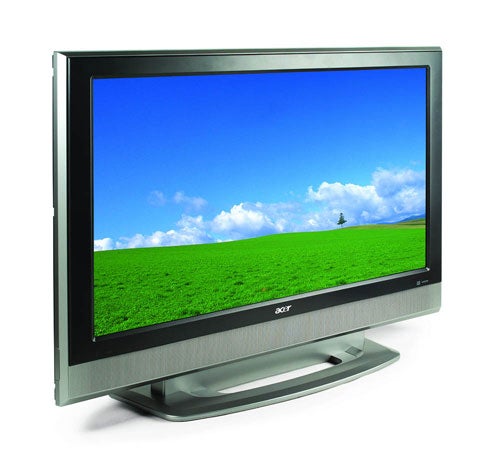 We stressed ‘obvious’ disappointment back there, though, with good reason. For it turns out that the aerial jack is only connected to an analogue tuner; Freeview reception is not on the menu. Still, sad though this is, we guess it’s a feature we can just about live without for £800, so long as there are suitable rewards in the performance zone.


The AT3720’s claimed specifications are solid enough. The 1,366 x 768 native resolution is sufficient to earn it its HD Ready wings; a claimed contrast ratio of 1200:1 is more than acceptable for such a cheap 37in TV; and although the claimed brightness of 450cd/m2 is slightly lower than normal, it shouldn’t present any problems in most normal living room environments.

Setting the AT3720 up is not exactly fun. The auto-tuning system kicks in immediately when you first turn the TV on, as you’d hope, but then makes seemingly no attempt to automatically put the channels it finds into the customary order. Even worse, it doesn’t dispose of any weak ‘ghost’ channels it may have picked up along the way. Grr. The level of manual input thus required to get the tuning sorted out hardly helps you forget the lack of a digital tuner!


Making operational matters still worse is the AT3720’s pretty dismal remote control, the buttons of which are rubbery, fiddly and unhelpfully laid out. Features turn out to be in pretty short supply generally. In fact, aside from a fairly basic noise reduction system, the only feature of significance is the set’s ability to take a 1080p feed from our Xbox 360 via the component video jacks. Oddly, however, we got no 1080p joy from our Marantz upscaling DVD deck when we hooked it up via HDMI. 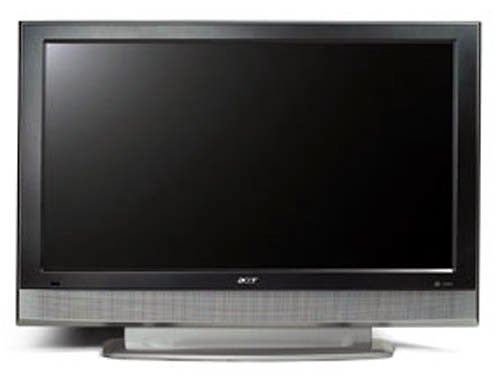 While we’re discussing the HDMIs, we also have to say that we weren’t impressed by how long it takes the AT3720 to shift gears from standard to high definition when switching between the two source types on our Sky HD receiver. Unleashed on our usual variety of HD and SD sources, the AT3720 is a solid performer in many ways undone by a couple of aggravating flaws.


Starting off with Gears of War in 1080i and 1080p from our Xbox 360 (well, we needed an excuse to play it, after all), things really aren’t bad. For starters, the set’s black levels get deep enough to just about cope with the game’s taste for darkness, meaning you don’t have to squint to make out what’s going on in dark corners as heavily as with some rival LCDs.


The picture also looks supremely sharp; in fact, at times it looks so crisp and detailed that you almost start to imagine the set is using a 1,920 x 1,080 pixel count. Colours are vibrant and solid too, with our only serious niggle at this stage being that stark edges can sometimes look over-emphasised, making the picture feel uneven.

Moving to HD video, it’s again impossible not to be struck by how sharp high quality sources like Later With Jools on BBC HD look. And by the fact that black levels continue to enjoy plenty of depth, and bright colours still look eye-catchingly well-saturated.


A couple of niggles do now make their presence felt, though. First, while dark areas are reasonably black rather than grey, they’re also a touch bereft of the sort of shadow detailing that gives them scale and depth. Also, while bright scenes look pretty authentic, darker scenes, especially those using naturalistic as opposed to studio lighting, exhibit colours that look slightly muted and unrealistic in tone. 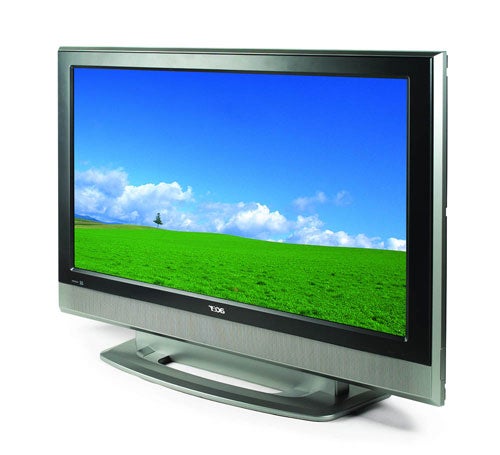 Moving down to standard definition sources, things become more problematic. The single greatest offender is the appearance of really quite substantial amounts of motion smearing. This is especially the case while watching the analogue tuner, but certainly also makes its presence felt with a good Sky Digital feed. The screen claims a response time of 8ms, but this figure seems optimistic to us. And actually, once we’d started looking for the problem, we spotted it during some high definition footage too.


The smearing as the screen’s LCD panel struggles to keep up with fast moving objects isn’t the only motion problem to be seen either, as the picture occasionally shears during standard-def camera pans.


These motion glitches really are unfortunate, for in many other ways the AT3720 surpasses our expectations of an £800 TV. But them’s the breaks, as they say.

Sonically the AT3720 is pretty average. It’s certainly got the raw power to go pretty loud, and sounds crisp, detailed and clear in the upper register. But the emphasis on the treble range isn’t counterbalanced by anything like enough bass depth, leaving the soundstage sometimes sounding over-bright and harsh.


The AT3720 just about does enough with its pictures and, especially, connectivity to rate as a decent stab at a truly budget LCD TV. But Acer needs to work on its operating system and motion handling if it really wants to win us to its cause.