Best known for its PCs and computer monitors, Acer was once quite into its TVs, too. But it seldom managed to bridge the PC-to-AV gap particularly successfully, so it didn’t really surprise us all that much when Acer TVs suddenly stopped arriving on our test benches way back in 2007.


Much more surprising as we head into summer 2010 is the fact that suddenly we’ve found an Acer TV back before us again! Admittedly at just 23in across the AT2356 is a small first step back along the TV road for Acer – but it’s a start. And we can only hope that if Acer has deemed the AT2356 worthy of running by us, then it might be a TV with plenty to say for itself.


Aesthetically it cuts a reasonably appealing dash. Its black frame is slender and glossy enough to look quite cute in an office, study, bedroom or conservatory, and the little circular desktop stand seemingly defies science with the way it supports the widescreen 23in frame on such a small base without leaving the TV feeling alarmingly wobbly. 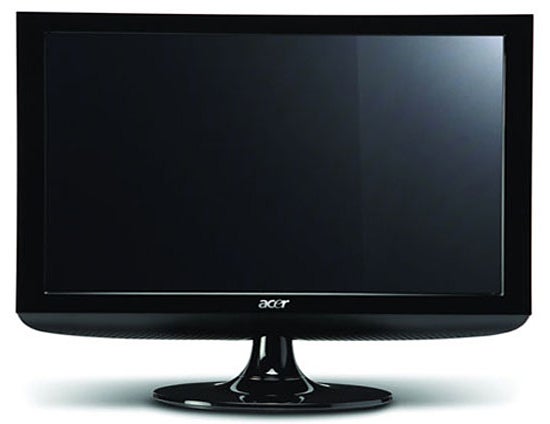 The only catch is that the bezel feels plasticky once you’re up close enough to touch it. But then let’s use this as the first of many opportunities to remind you that at just under £200, the AT2356 is remarkably cheap for a widescreen HD Ready 23in TV, so we can hardly expect it to be hewn from a chunk of gold.


The AT2356’s price becomes even more startling when it turns out that the screen isn’t just HD Ready, but actually crams in a Full HD resolution of 1920 x 1080 pixels. And it boasts a pretty effective-looking response time of 5ms, and an even more promising claimed contrast ratio of 20,000:1.


This latter figure doesn’t look much compared with the frequently preposterous figures bandied around in association with large LCD and plasma TVs, but it certainly stands out against most small-screen rivals.


Such figures always have to be taken with a large pinch of salt, however. So it’s nice to see our hopes reinforced by a claimed native (as in, not created by a dynamic backlight system) contrast ratio of 1,000:1, where many small TVs struggle to get above 500-800:1.


Connectivity isn’t quite so rosy. There are only two HDMIs, for instance – but then, will anyone buying such a cheap TV for a second room actually need more than that? Probably not.


There’s only one SCART, too – though again, we’re bound to say that if you’ve just bought yourself a Full HD TV and are then feeding it with a resolutely standard definition SCART source, you’re selling yourself very short.

On the upside, the TV does retain a VGA PC input, a headphone output, and a coaxial digital audio output – none of which can generally be considered dead certs on small, budget TVs.


We also had our hopes raised by the appearance of a USB input – but sadly, if hardly unexpectedly, this turned out to only be there for service use. You can’t play multimedia files through it.


In looking for further features of the AT2356, we should start by stressing that this is, most definitely, a TV, not a PC monitor. In fact, it sports a Freeview tuner as well as an analogue one. It actually carries an HD tuner, though this sadly isn’t compatible with Freeview HD’s DVB-T2 system.


As journalists, we’re taught from an early age that the word ‘nice’ is horribly wishy washy, and shouldn’t be used. But Acer has actually gone out of its way to use the word, coming up with the New Intelligent Color Engine (NICE) moniker for what is essentially a proprietary auto colour optimisation processing system. 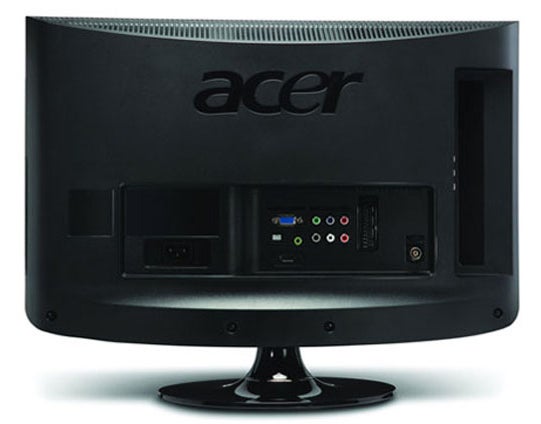 To be fair, despite its oddly bland acronym, the NICE does seem to be a bit more involved than similar systems on other brands of TV – certainly other affordable brands of TV. Among its elements are continual assessments of the image content, and an ability to adjust contrast, brightness, sharpness and noise reduction levels based on how far you sit from the screen.


The TV also supports 1080/24p Blu-ray feeds, and carries a handy suite of picture presets (including the NICE auto control system, plus Movie and Game modes).


At first glance, we have to say we didn’t really see why Acer might have been feeling particularly confident about the AT2356’s AV credentials. For we started out with a series of dark film and game scenes, and found all of them having to appear behind some quite marked evidence of LCD technology’s ‘grey clouding’ phenomenon.


We would expect to see some evidence of greyness over parts of the picture that should look black with almost any LCD TV, of course. But the greyness is more pronounced with the AT2356 than we’re coming to expect from the latest generation of LCD TVs.


As well as leaving dark scenes looking slightly unnatural, the grey clouding also means that subtle shadow details can be pushed out of the picture, leaving the darkest corners feeling a bit hollow.


The only real positive than can be taken out of the AT2356’s portrayal of dark scenes is the fact that the backlight is at least consistently grey right across the screen. In other words, you don’t have to put up with the far more distracting situation where some parts of the picture look obviously brighter than others.

Fortunately, the AT2356 leaps into life quite impressively when we switch to brighter, more colourful material. Now we’re free to note just how strikingly vibrant yet also realistic the AT2356’s colours tend to look. This gives them a real edge over the colours of the majority of other very affordable small TVs, especially since the colour tones don’t dip in naturalism as badly as expected when you switch down from HD to standard definition.


The AT2356’s HD pictures also score over those of most budget screens courtesy of their sharpness. Obviously, you have to question whether a Full HD resolution could ever truly be necessary on a screen as small as 23in, but that doesn’t stop the AT2356’s HD portrayal from doing a nice job of reproducing the detail and subtleties of a good HD image. 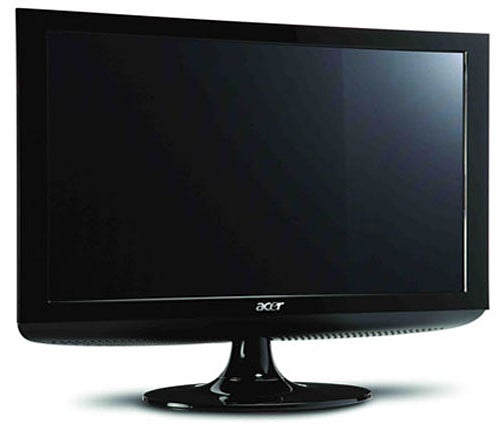 Playing a part in this sense of clarity is the AT2356’s surprisingly respectable motion handling. Blurring and smearing are only noticeable on a near-subliminal level during HD viewing, and judder is seldom distractingly troublesome.


Standard definition pictures on the AT2356 look a little more prone to motion blur and soft motion than its HD pictures, but not enough to prevent the AT2356 being much better at handling standard def images than your average budget TV.


One performance area where the AT2356 certainly doesn’t rise above the budget fray, however, is audio. For in keeping with so many other small, flat TVs, its sound really is desperately one-dimensional thanks to a near-total lack of bass. This leaves all of its treble information sounding over-exposed and thin, voices sounding nasal and compressed, and the soundstage generally sounding tiringly harsh when put under any duress at all.


The best that can be said about the AT2356’s sound is that it doesn’t distort into phutting and thudding, even when pushed to near-maximum volume (which isn’t actually very loud!).


The AT2356 isn’t going to win any awards for its AV performance, features or design. But nor does it completely mess anything up, as we’d half expected given the set’s price. So we guess overall it deserves a berth on any arch bargain-hunter’s audition list.