There are a couple of specifications available for this laptop in the UK. The cheaper, £900 model on review here comes with a quad-core Intel Core i5-7300HQ clocked to 2.5GHz, an Nvidia GeForce GTX 1050 with 4GB of graphics memory, 8GB of DDR4 RAM and a 128GB SSD paired with a 1TB hard disk. The £900 Dell Inspiron 15 Gaming is largely the same, although it makes the sensible swap of scrapping the hard disk and doubling the size of the SSD.

The more expensive, lesser-found £1100 VX 15 features a more powerful Core i7-7700HQ processor, more powerful GTX 1050 Ti graphics, 16GB memory and a larger, 256GB SSD. That’s identical to the £1100 Dell Inspiron 15 Gaming, whose performance you can check out in the review.

What sort of performance does that £900 get you? Well, the processor paired with speedy memory and a relatively fast SSD results in perky performance in everyday tasks, and can even handle processing photos and videos. It doesn’t have the grunt of an i7, and you’ll notice the difference in intensive tasks such as rendering videos, but it won’t hold back your games by much.

In the benchmarks, it scored 3833 and 9995 in the Geekbench 4 benchmarks and 3509 in PCMark Home, which is what you’d expect from this specification and compares favourably to the similarly specified Asus ROG GL553V, another 15-inch gaming laptop. 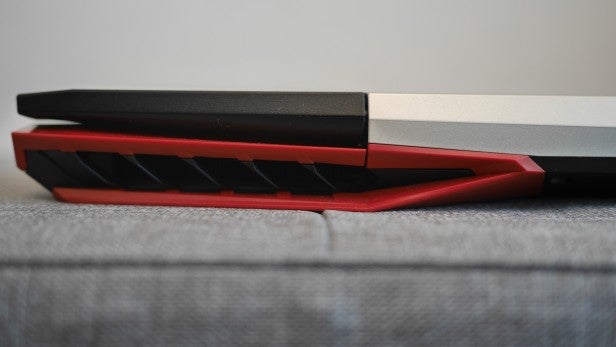 The GTX 1050 acquitted itself well in gaming benchmarks, too, managing 42.9fps in Rise of the Tomb Raider at High settings in Full HD. In Middle-earth: Shadow of Mordor, it put in an average frame rate of 46.9fps at Ultra settings. In Ghost Recon: Wildlands, a game that came out very recently, you can expect around 45fps if you play the game on Low settings in Full HD, or about the same if you drop the resolution to 1366 x 768 and step it up to Medium. The game looks fine at these settings, although you’re pushing what’s possible with this GPU and might consider saving a little more cash for a 1050 Ti-powered laptop.

The 1050 is a friendly card for eSports, so if you’re planning on to play games such as DOTA and Overwatch, you’ll be very well served indeed with 150fps plus in both games.

Doing all this work, you’d probably expect the VX 15 to be fairly noisy. It’s actually a little quieter than Dell’s Inspiron 15 Gaming, which is pretty impressive – although this could simply be down to its lower-power graphics hardware. Either way, it isn’t noisy enough to be a distraction, especially if you’re wearing headphones.

Battery is a weak point on the Aspire VX 15. It isn’t awful by any means, but up against the long-lasting Dell Inspiron 15 Gaming, its 7hrs 11mins of stamina in the light-use Powermark test – which involves web browsing and video playback – is disappointing. In my own real-world use of web browsing and music streaming, I managed a maximum of four hours before it needed to be plugged in. The Dell, by comparison, could go for six or more hours. 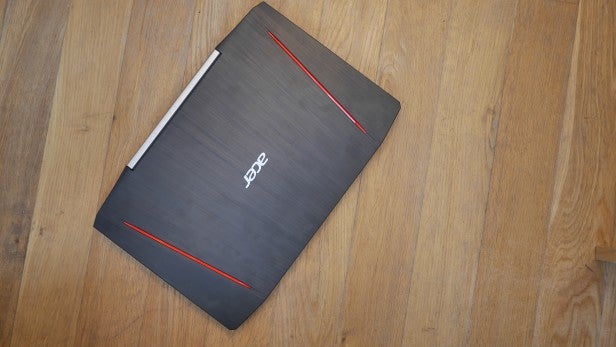 Should I buy the Acer Aspire VX 15?

The Aspire VX 15 is a competent gaming laptop and is good value at £900, with solid Full HD gaming performance and an attractive, albeit gamer-focused, design. However, it’s let down by its screen and battery life, plus it’s saddled with a small SSD. The £900 version of the Dell Inspiron 15 Gaming is, for me, a better deal. But keep an eye out for special offers on the Acer, because any price cuts will make this a good-value machine.

A solid gaming laptop let down by a poor-quality screen.