Window 8 may not be the most popular piece of software Microsoft have ever released, but one of its key benefits is the way (in theory at least) it straddles the touch screen worlds of tablets,  and the more conventional bread and butter keyboard and mouse kingdom of laptops and desktops. To make the most of this, we’re seeing a bunch of hybrid laptops that offer both keyboards and touch screens, and the Acer Aspire V5-571 Touch is another such hybrid.

It isn’t a tablet with a keyboard dock, though – the screen half of it doesn’t have any of the innards that will allow you to detach it, meaning that most of the time you’ll find the tried and tested traditional computer inputs are not only sufficient, but actively desirable.

Priced somewhere between the budget end of the market and the Ultrabook end, at £600 on the surface it sounds like a compromise between power and the finger swiping world of Windows 8, while not saying goodbye to the traditional benefits of portable computing. But can it offer a worthwhile experience to make the ultrabooks sweat? 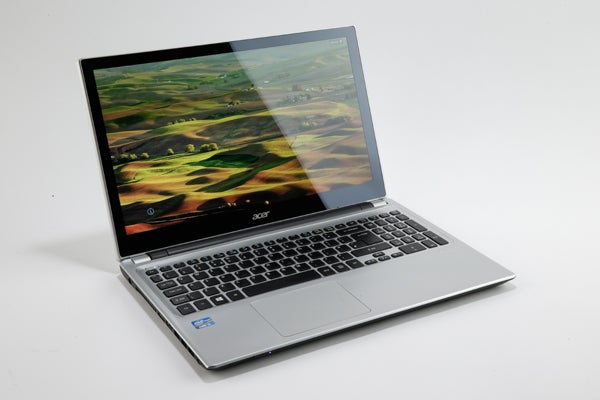 The V5 Touch doesn’t deviate from standard laptop aesthetics. A plasticky silver shell on the screen side, with a black undercarriage. It’s not exactly thick, as 15.6” laptops go, but at 2.4kg it’s quite weighty to be taken around everywhere with you.

Lifting the lid reveals a spacious full sized keyboard, complete with a full number pad on the right hand side and a generously sized touch pad, slightly offset to the left (in order to be underneath the letters, rather than caught between them and the numbers). With the silver frame, and backlit black keys with a black rim around the screen, it’s vaguely reminiscent of the Macbook Pro, when in its open state, if it weren’t for the tell-tale signs that OSX is nowhere near this: the Start button, and the big ‘Acer’ label being the most obvious clues.

It feels solidly built, and that it could take some of the knocks and scratches that life will inevitably hand it quite comfortably, and the screen, which allows you to tilt surprisingly far back doesn’t feel like it’s going to be easily moved – though of course this may well deteriorate over time. 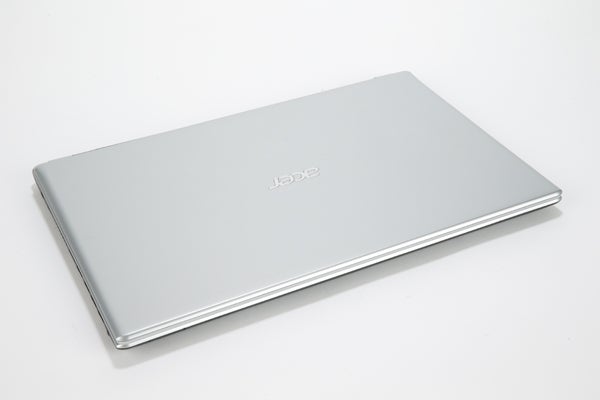 Like with the S7 Ultrabook we looked at recently, Acer has taken the sensible decision to move all the connectivity ports from the back to the more easily accessible sides, which we heartily approve of. Along the left hand side, you have the power in jack, VGA/ethernet, HDMI out, and 3 USB slots (2 x USB 2.0, 1 x USB 3.0) and a headphone jack, while along the right hand side you have a Kensington lock and a DVDRW drive. Wirelessly it supports WiFi N and Bluetooth 4.0, though I found during testing that the WiFi in my house was prone to dropping even while a Macbook, Note 2 and iPad were having no such difficulties. 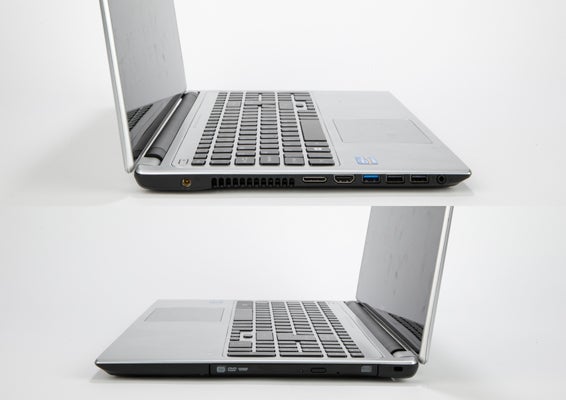 The V5 boasts a 15.6” screen, packing a 1366×768 resolution. In practice the resolution is fine for most things, but as consumers increasingly spoiled by spiralling mobile phone resolutions and the retina screen of recent iPads, it’s a touch disappointing. What’s not disappointing is the touch, which allows 10 point multi-touch, should you wish to give all of your digits a workout, and it certainly allows you to get the most out of Windows 8’s navigation functions, though this understandably gets a bit more fiddly when in ‘classic desktop’ mode. Pleasingly, it doesn’t seem hugely prone to getting noticeable smudgy fingerprints that even non-touch laptop screens seem to accumulate over time.

Other than the tactile nature of it, there’s not much else really outstanding about the screen. Some of the icons in Windows 8 look quite fuzzy, and the viewing angles aren’t as good as some of its rivals, but it’s perfectly serviceable. 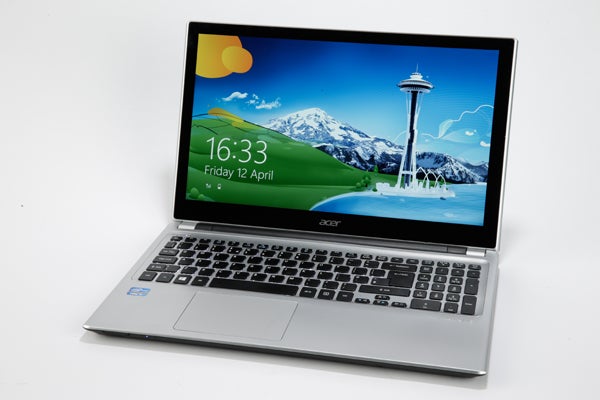 Used as our main laptop for the review period
Tested for at least a week
Used consistent benchmarks for fair comparisons with other laptops
Reviewed using respected industry benchmarks and real world use
Next
Acer Aspire V5-571 Touch – Keyboard, Speakers, Battery life and Value Review