What is the Acer Aspire V Nitro Black Edition VN7-791G?

The Acer Aspire V Nitro Black Edition VN7-791G is, according to Acer’s own blurb, the apex of the
Aspire V Nitro line. What that means in reality is it’s a premium, large
but slim, 17in laptop that can serve both as a modest gaming machine
and a workstation, much like Apple’s 17in MacBook Pro line used to be.

The
Black Edition also includes Intel’s new RealSense 3D camera that can be
used for gesture capture and facial recognition, which again has uses
for both work and play. A 15in model also exists, with the primary extra
feature of the 17in model being the inclusion of an optical disc drive,
as well as the larger screen size and extra connectivity.

This
is a nice enough looking machine, assuming you like black. All but the silver
hinge section is covered in a soft touch matt black finish that looks
and feels better than your typical laptop plastic.

SEE ALSO: Our pick of the best laptops and convertibles 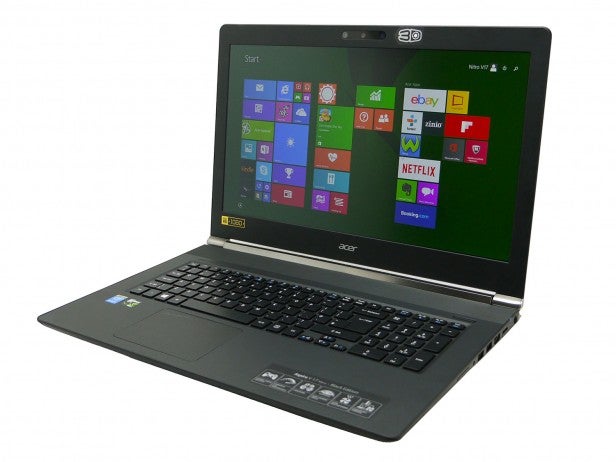 The overall
design, though, is certainly not at the level of something like a
MacBook Pro. Obviously there’s the lack of the unibody aluminium chassis
but it’s also the little things like the bezels round the screen all
being different sizes and the otherwise quite nice ridge vertical line
pattern on the lid not being reflected on the underside – it’s a
smart-dressed mid-range machine rather than a truly premium model.

It
is, however, reasonably slim and light for such a large and
feature-packed machine. At 23.9mm thick and weighing in at 2.9kg (plus
630g for the power supply) it certainly doesn’t break any records – the
MSI GS70 Stealth Pro takes the crown for those measurements – but it’s compact
enough and has a relatively small footprint of 389.6 x 287.5mm. 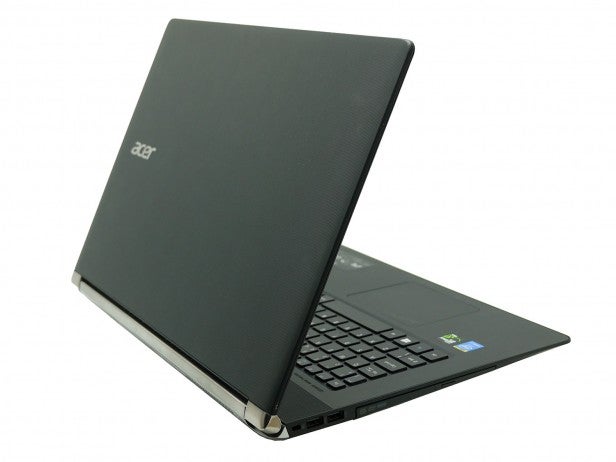 This is all particularly impressive given the inclusion of a DVD drive, which takes up a huge amount of internal space.

Overall
build quality is okay with that soft touch matt finish giving the whole
machine a nice feel. The screen is also stiff enough not to bend as you
open and close it, and while there is some flex in the base as you type
it’s not enough to be a concern. However, we did notice a couple of
areas where the black finish had already been scratched off, which is
often the downside to that style of finish.

As
you’d expect of such a large machine, the Acer Aspire V 17 Nitro has
plenty going on. However, one thing it can’t boast is a particularly
spec-busting screen. With a resolution of 1920 x 1080, it’s no higher
than the 15in equivalent. Instead Acer is relying on its quality and
overall size to win customers over.

SEE ALSO: Why Windows 10 proves Intel RealSense is a must-have 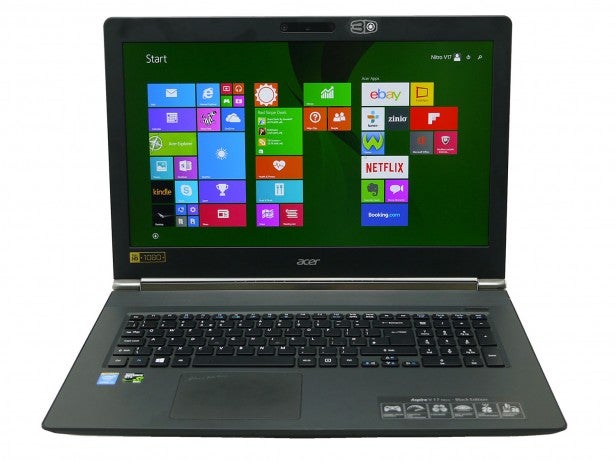 It’s also notable that this
is the highest spec screen Acer offers, so it’s not like you can
upgrade to a higher-resolution screen – currently no-one makes higher
resolution 17in panels.

Otherwise, though, it wants for little. As mentioned,
there’s the inclusion of a DVD writer drive, which is an ever rarer
occurrence these days. Take the step up to the even higher spec NX.MUFEK.002 model and you get a Blu-ray drive. If we were looking at this machine as being a complete all-in-one family laptop we’d take the Blu-ray upgrade but it is quite a bit more expensive so it’s worth weighing up whether you do actually ever watch them.

Dotted round the edges is a decent selection of
connections. On the right there’s an Ethernet port, an HDMI, two USB 3.0
ports, a headphone jack and an SD card reader. Meanwhile on the left is
the optical drive and two more USB 2.0 ports.

You do miss out on the
latest USB 3.1 with its Type-C connector, but that is only just
appearing on machines that have just been announced, with most not yet
available – the new MacBook being the main exception. Internally there’s
also ultra-fast 802.11ac Wi-Fi along with Bluetooth 3.0.

Powering
everything along is an Intel Core i7-4710HQ, which is a powerful,
quad-core processor running at 2.5GHz. This is backed up by 8GB of RAM, a
128GB SSD and a 1TB hard drive. A very capable overall system that’ll power through just about anything most home and office users can throw at it.

On the gaming/graphics side,
there’s an Nvidia GeForce GTX 860M, which is a reliable mid-range gaming card. The higher-spec model offers a very slight upgrade to the 960M, which is a smidgen faster – it’s not going to revolutionise your gaming.

This being such a big
machine you of course get a full keyboard, including a numpad, and it’s
backlit too in an interesting choice of red.

Used as our main laptop for the review period
Tested for at least a week
Used consistent benchmarks for fair comparisons with other laptops
Reviewed using respected industry benchmarks and real world use
Next
RealSense, Keyboard and Trackpad Review