When Acer first launched its Timeline-branded range of laptops last year they were based on Intel’s new CULV processors. These frugal processors, combined with high-capacity batteries, resulted in machines like the Acer Aspire Timeline 4810T, which could last close to eight hours on a single charge. This year the company has revamped the range and renamed it TimelineX, but has abandoned low-voltage CPUs in favour of Intel Core i3, i5 and i7 processors and powerful dedicated graphics. 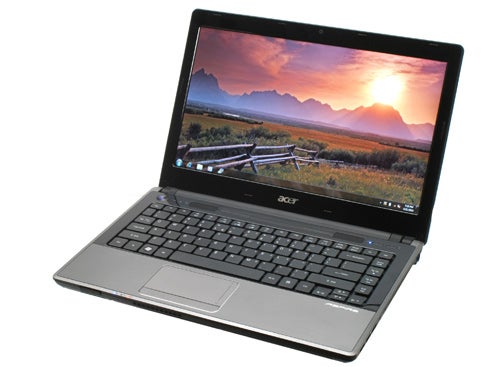 Despite these changes, Acer still reckons the Aspire TimelineX 4820TG we’re reviewing can manage eight hours of battery life using the standard six-cell battery and up to 12 hours with the optional nine-cell unit. It’s not as if the 4820TG is any less portable than its predecessor, either, weighing a reasonable 2.0kg. While not ultra-portable, it’s the kind of form-factor that can be carried around without too many complaints.


Inside, the 4820TG utilises a dual-core Intel Core i5 processor running at 2.26GHz that has a 3MB cache. It’s supported by a plentiful 4GB of DDR3 RAM and a 500GB hard drive, while graphics are supplied by a dedicated 1GB ATI Mobility Radeon 5650 graphics card and Intel’s integrated HD Graphics chip. It’s the latter that’s key to the 4820TG’s battery life claims, as it will switch between the dedicated graphics and Intel’s low-power alternative when starved of mains power. 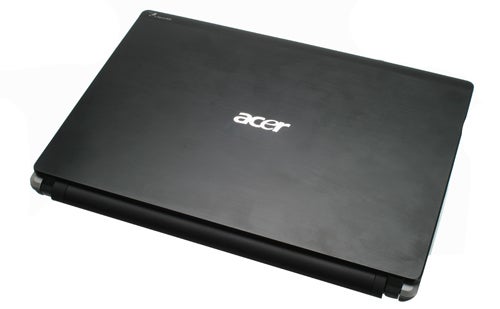 On paper, then, it’s a powerful machine, but like the original Timeline’s the exterior of the 4820TG is quite unassuming. Its lid is finished in black, brushed aluminium, an effect that’s repeated on the palm rest but in a tasteful gunmetal grey. This makes a nice change from the glossy black plastic so often seen, but it’s still present around the screen and keyboard.


On the whole, the design is pleasant in an unremarkable kind of way, but we have serious reservations about the build quality of the machine. There’s more flex than is desirable throughout the machine, including in the keyboard and in the base of the machine, and applying pressure to the lid revealed that the LCD panel has very little protection. It all feels far from reassuring, especially in how the screen wobbles markedly when you adjust it. 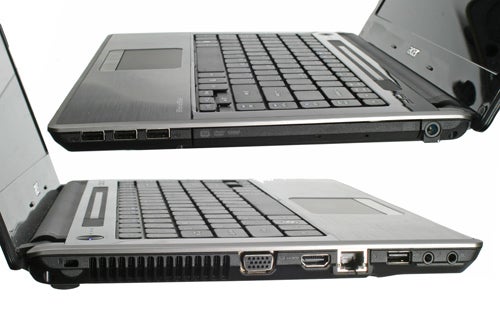 For wired connectivity you get a generous four USB ports, but none of them support eSATA or standby charging. These are joined by HDMI and VGA for video, a Gigabit Ethernet port, two audio jacks (1x microphone, 1x headphone/SPDIF) and a memory card reader. You get both Wireless-N Wi-Fi and Bluetooth 2.1 + EDR for your wireless needs as well, in addition to a 1.3-megapixel webcam. There’s also a standard, tray-loading 8x DVD+/-RW optical drive, its eject button sitting to the top right of the keyboard.

One of the significant causalities of the 4820TG’s patchy build quality is the keyboard. It’s far from terrible, thanks mainly to the good layout and sizeable keys, but the key actions feel muddy in comparison to many laptops that pass through our office. Even recent Acer laptops have fared better than the 4820TG, making its relative weakness all the more disappointing. 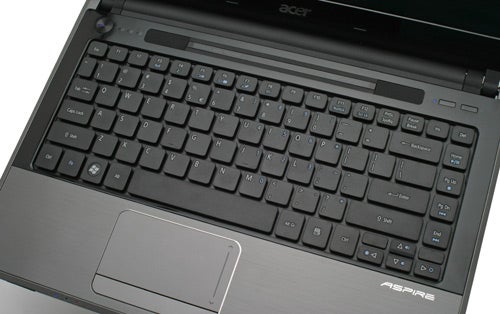 By comparison, the touchpad is much better. Unlike last year’s Timelines its positioning doesn’t interfere with typing at all, and the rocker-style buttons offer decent feedback. It also supports the full gamut of multi-touch gestures, including two-finger scrolling, pinch-to-zoom and rotate. Its chromed border is a nice visual touch, too.


Like a lot of laptops, the 14-inch screen on the 4820TG has a 1,366 x 768 native resolution. It’s a good resolution for a laptop this size and the screen itself is among the better ones we’ve seen of late. Viewing angles aren’t anything to write home about, but the screen is both bright and sharp. In videos, it produces a good amount of detail and colours are generally rich and fulsome. 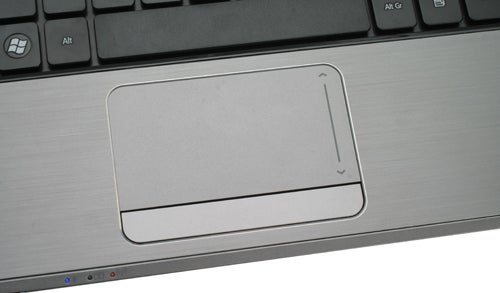 These are things that can’t be said for the integrated speakers, despite being ‘enhanced’ by the third generation of the Dolby Home Theatre audio tech. It does a surprisingly good job improving the output and applying virtual surround sound to the stereo speakers, but it can’t make up for their otherwise complete lack of bass and clarity. It should have greater success with a good set of headphones or speakers, though, and it’s a nice value-add for anyone who watches lots of films and TV on their laptop.


Another potential problem with the 4820TG is its graphics switching implementation. Since ATI has yet to develop anything as nifty as Nvidia’s Optimus technology, which makes the switch seamless, it suffers all the usual problems encountered with this technology. This includes the screen flashing on and off as the graphics switches, which happens automatically when you unplug the system. 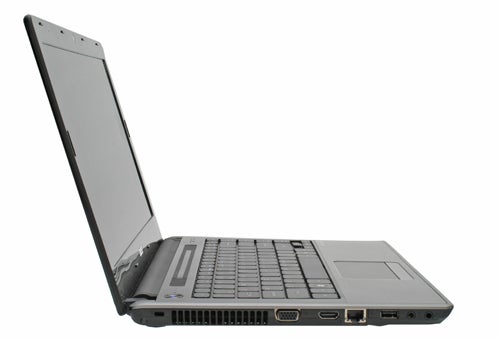 Unfortunately the feature is quite poorly advertised, with no hardware switches or buttons available to control it. As such, anyone who didn’t know their laptop had the feature would probably find it quite alarming, not least as an error message pops up if any graphics enabled application (even Solitaire) is running when the switch is made. Neither will the switch be made automatically after you close the program, necessitating a trip to the driver settings. It all smacks of a feature that hasn’t been properly thought through; one that will surely confuse a lot of consumers.

While there may be some issues surrounding the build quality and graphics switching system on the 4820TG, one thing it does have in abundance is speed. Our model, which has a mooted retail price of £899, goes toe-to-toe with large desktop replacement systems like the Acer Aspire 5942G and the Samsung R780, even outperforming the latter in PCMark Vantage.

This is very impressive, showing that the 4820TG can tackle all the most demanding tasks you’re likely to throw at a laptop. Be it HD video editing and encoding or photo editing, it should cope quite comfortably. Given the size and weight of the machine, it shares a similar power-to-weight ratio as the Sony VAIO Z Series, though it doesn’t get quite as noisy as it does.


Gaming isn’t beyond the 4820TG, either. In both TrackMania Nations and STALKER: Call of Pripyat it performed well, producing results extremely similar to our two comparison systems. This should be enough to play many modern titles, such as COD4: Modern Warfare 2, at reasonable settings, though it doesn’t quite classify it as a gaming machine.

While the performance has been quite evenly matched thus far, where the 4820TG stands out is with its battery life – as it ought to, given Acer’s claims. In the Productivity segment it lasted a good 320 minutes (5hrs, 20mins), while 195 minutes (3hrs, 15mins) of DVD playback is long enough for even the longest films.

It’s a far cry from Acer’s claims of eight-hours from the standard six-cell, 6,000mAh battery though, which is disappointing but hardly surprising given the switch from CULV to Core i5 processors. Quite why Acer felt the need to cling onto this unrealistic claim is beyond us, but clung to the claim it has.


Despite delivering performance and battery life to satisfy any demands, the 4820TG is a difficult laptop to recommend outright. Its design lacks refinement and the build quality could be better, while its implementation of graphics switching leaves a lot to be desired. It’s a great laptop for a power-user who understands its ins and outs, but regular users may find it frustrating.