Considering both versions of its smaller 14in sibling (the dual-core 4810T and single-core 4810T-353) won recommended awards, we’re expecting good things from Acer’s new 15.6in Aspire Timeline 5810T. Arguably an Ultra-Low Voltage (ULV) processor and thin-and-light chassis don’t make quite as much sense in a form factor this large, but let’s see how it actually holds up.


In terms of style the 5810T is identical to its smaller siblings, meaning you get a subtle, conservative look. As ever the outer part of the lid is constructed using brushed aluminium, lending not only a high-quality feel but excellent durability for the part of a laptop that’s usually exposed to the most abuse. 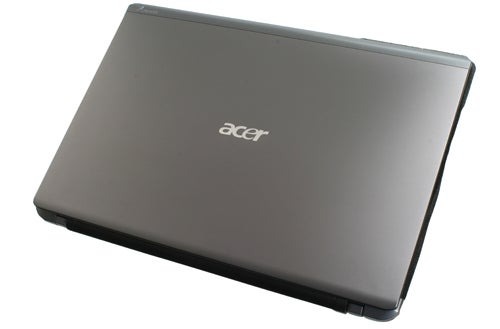 The matte finish persists once you open the laptop up, but though the materials used are now plastics, build quality remains excellent with not a hint of creak or flex anywhere. All this while maintaining a slim profile (with a maximum thickness of 30mm) and weighing in at a mere 2.4kg – both impressive figures for a 15.6in machine. The only unfortunate exceptions to the generally strong build-quality are the hinges, which could be sturdier.


Though the 5810T won’t win any beauty awards, its combination of carbon grey with a matte black screen bezel and semi-glossy keyboard is fairly stylish. Were it not for this keyboard and the reflective screen, the Timelines could easily be mistaken for business machines, but to be honest we’d far rather have this than the constant care and maintenance of a glossy finish, so can only commend Acer for its decision. 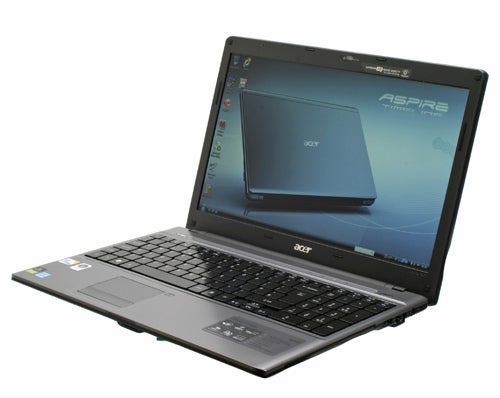 Just below the screen’s matte black bezel nestles a thin grey strip containing a few sensitive touch-controls including Wi-Fi, instant back-up and eco mode. To the left of this resides the small chromed power button sporting an unobtrusive white LED, while on the right is a disc-eject button which operates the tray-based optical drive. This is far easier than having the button along the side and, like the metal lid, is yet another of those touches that sets the Timelines apart from many other laptops in their price-range.


Connectivity is the only minor negative so far, in that the 5810T lacks not only eSATA but also any form of ExpressCard slot. It’s one of the sacrifices of the slim profile, but at least all the essentials are there. At the left we have a lock slot, USB port, VGA and HDMI, followed by another two USB ports close together and finally 3.5mm microphone and headphone jacks, the latter of which doubles as S/PDIF. The last four connections are also marked by small icons along the top to make plugging cables in even easier.

Along the front we find a memory card reader and a large colour-changing LED that indicates if the 5810T is charging or the battery is getting low. To the right is the optical drive, a fourth USB port and Gigabit Ethernet socket.

Getting onto usability, the isolation-style keyboard is both attractive and practical. Layout is excellent: everything is where you’d expect it to be and there’s a proper UK-style Return key. Acer has also taken advantage of the larger form factor to add a full number pad with large 0/Insert key. Despite their semi-glossy finish and flat profile the keys aren’t too slippery and feedback is fairly good, with a positive click and decent amount of travel. 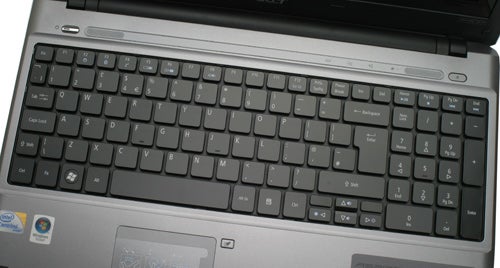 One of the few complaints we had with the 4810T was that due to the central location of the touchpad it was easy to move the cursor accidentally, making the pad’s dedicated deactivation button (for which the orange backlight is much dimmer on this larger model) an occasional necessity rather than a feature. With the 5810T this issue is easier to avoid, for though the touchpad is still in the same location relative to the letter keys it’s been moved over to the left because of the number-pad. 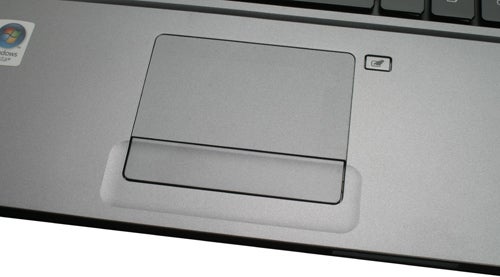 As with the other Timelines the touchpad itself is a pleasure to use. Its large, matte yet smooth surface makes navigation effortless and gives you room to execute its supported multi-touch gestures easily. The touchpad’s buttons are integrated into a single large moulded rocker switch which also offers good feedback, though it does feel slightly loose – a pity considering the superior build quality elsewhere.


One area that could have done with some improvement was the 4810T’s speakers, but unfortunately the ones found on the larger 5810T are just as poor. With an utter lack of bass, muddy trebles and even slight distortion at higher volumes, the occasional YouTube video is about all you’ll want to use them for. Thankfully Acer has supplied Dolby Sound Room technology to enhance listening through external speakers and especially headphones thanks to Dolby’s excellent headphone surround sound virtualisation. 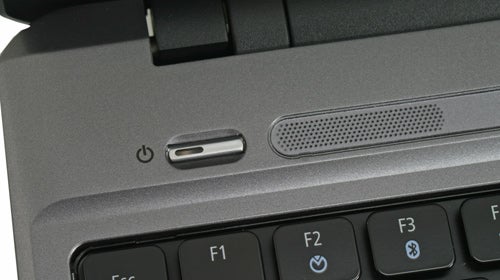 Acer hasn’t taken advantage of the larger screen to up the resolution, so we get the same 1,366 x 768 pixels as on the 4810T and 3810T – not much of a criticism really since it’s the most common resolution offered on 16:9 laptop displays, but we can always hope, right?


Once you get past the reflections which mar the experience in bright ambient lighting, image quality is decent enough for a laptop. The usual failings of limited viewing angles and black levels do apply, and in fact the 5810T didn’t cope as well with our greyscale test as some. On the other hand banding was negligible and backlighting very even, with excellent sharpness making even small fonts perfectly legible.

Generally the screen is a bit muted but this does result in a more realistic colour palette – though not even close to accurate enough for any kind of graphical work, for which the RGB-LED display of the Dell Studio XPS16 is still one of the few affordable options.

Naturally, one of the highlights of the Timeline series is its use of Intel’s Consumer Ultra-Low Voltage (CULV) processors. At the heart of the 5810T-354G32Mn beats a Core 2 Solo U3500 CPU running at a relatively pedestrian 1.4GHz. Though this single-core part is far faster than a higher-clocked Atom and will run 720p content with consummate ease, not only did efficiently-encoded Full HD content leave it struggling in our tests, but even HD YouTube posed a challenge. This is something that the dual-core version would alleviate and which a more powerful GPU with HD-video decoding (using compatible software) would solve altogether. Of course, you can get a dual-core version of this Timeline – if you’re prepared to dole out the £170 premium that demands. 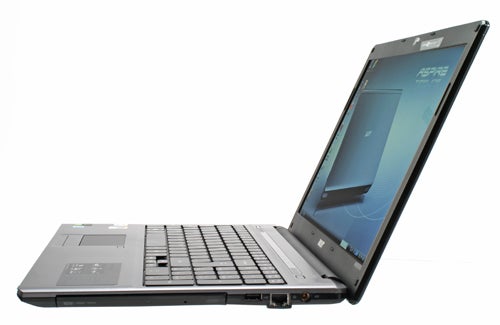 As you might have guessed from the above, the graphics side of the 5810T is fairly weak too, with Intel’s good old integrated GMA 4500MHD returning an utterly unplayable 4.34fps in TrackMania Nations Forever on medium detail at the screen’s native resolution. However, while they’re no great performers, it’s worth keeping in mind that Intel’s integrated graphics solutions are very frugal on the battery.


There’s also nothing weak about the rest of this Timeline’s specifications. Starting off with 4GB of RAM despite only coming with a 32-bit version of Windows Vista Premium, the 5810T continues on with a very generous 500GB hard drive, the highest capacity you’ll find on a notebook until 640GB drives begin to hit the market. Nor has Acer skimped on wireless connectivity, with Draft-N and Bluetooth 2.0 plus EDR rounding things out nicely. 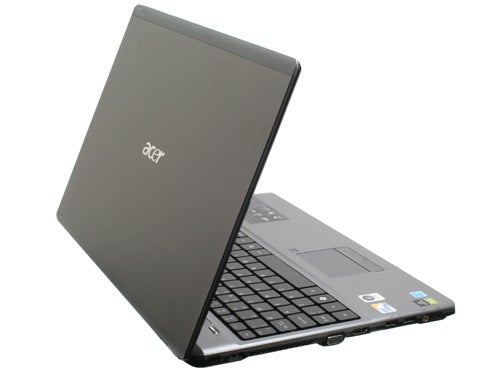 As you can see in our PCMark Vantage results, the 5810T-354G32Mn performed slightly better than the 4810T-353 despite sharing the exact-same CPU and chipset. This slight hike can be attributed to the different hard drive used, but keep in mind that in real-world use the performance-difference is negligible.

Last but hardly least we come to the machine’s battery life. This is almost the same as the 4810T-353 (despite the extra screen acreage) thanks to its high capacity 5,800mAh (63 Watt-hour) battery. Both machines give an excellent result of over six and-a-half hours in the non-intensive Reader test with Wi-Fi turned off and screen brightness at a very usable 40 per cent, and since the screen is still perfectly legible at minimum brightness you can easily get even longer out of it.


Best of all, at a very reasonable £599 the 5810T is just as affordable as the other Aspire Timelines. However, the question remains if a slightly underpowered system with excellent battery life makes sense at this size. In terms of chassis, the only advantages you get are the full number pad, an extra USB port and arguably the bigger screen. Just on the basis of these we’d recommend going for the smaller and lighter (1.9kg versus 2.4kg) 4810T-353 despite its smaller hard drive. 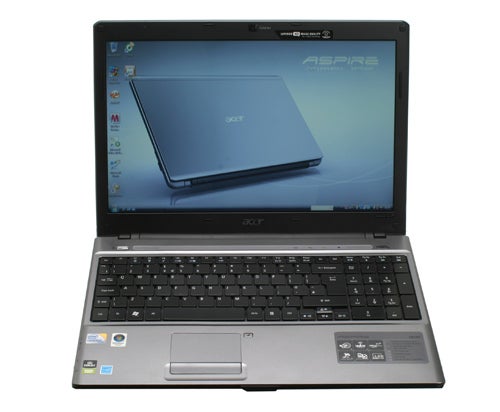 If you’re looking for something of an all-rounder, the 5810T isn’t quite that easy to recommend either, since the likes of Samsung’s R522 offer more for less in everything but battery life. The R522 features a regular Core 2 Duo which can handle Full HD and more strenuous multitasking, and connectivity is also improved with the addition of eSATA. However, if you must have the bigger form factor and demand the best battery life, Acer’s largest Timeline is still worth considering.


Acer once again shows off the potential of Intel’s CULV processors with its conservative-looking Aspire Timeline 5810T-354G32Mn. Some of the best battery-life we’ve seen on a 15.6in laptop joins superb build quality, intelligent design and good ergonomics to form a generally well-specified laptop that is only held back in intensive usage and HD entertainment by its single-core Core 2 Solo CPU. It’s still a decent laptop, but if true portability is what you’re after, you’re better off with the 14in or 13.3in models in the Timeline range.

Again, dual-core (in the 4810T) shows a significant performance advantage over single-core (5810T) with Intel’s ULV processors, but there’s a price difference to match.

Battery life is in line with the Dual Core 4810T-353, but doesn’t hold up quite so well against its 14in sibling sporting the same Core 2 Solo processor.

Nevertheless, well over six hours is an incredibly strong result, and the screen is perfectly usable at its minimum brightness rather than the 40 per cent setting used here.