What is the Acer Aspire Switch 12?

Most of us are now familiar with two-in-ones and convertibles, but Acer’s tried to take versatility to a whole new level with the Aspire Switch 12. Marketed as a ‘five-in-one’, you can use it as a laptop and a tablet, though its detachable keyboard and versatile base offer even greater flexibility.

However, considering its competition, the Switch should be cheaper than it currently is. Its special design is certainly eye-catching, but performance and specs are in line with models that cost £100 less. 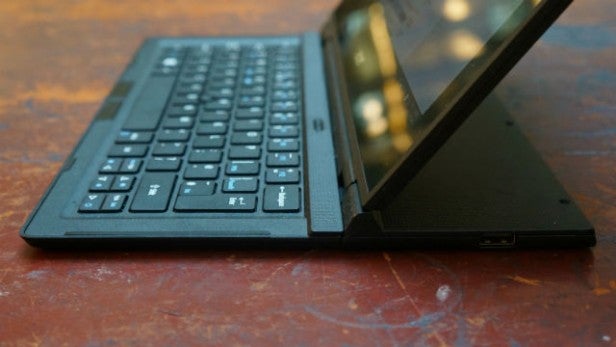 The Acer Aspire Switch 12 looks unlike any laptop you’ve ever seen.

While traditional laptops feature a base that juts out in front of the screen, the base of Acer’s left-field creation sticks out from the back. It caused me a great deal of confusion when I first opened the box.

The Switch’s special hinge also swings the screen the opposite way to what you’d normally expect. Instead of rotating so that the screen meets the keyboard, it goes the other way, leaving the display completely exposed. It’s more flummoxing than cutting edge.

That’s not all though. While half of the base is fixed to the display, the portion featuring the keyboard can be detached and re-attached to the Switch at the foot of the screen. You can do this through the use of dual magnetic connectors, which are solid and work slickly, though it’s definitely a two-handed job. 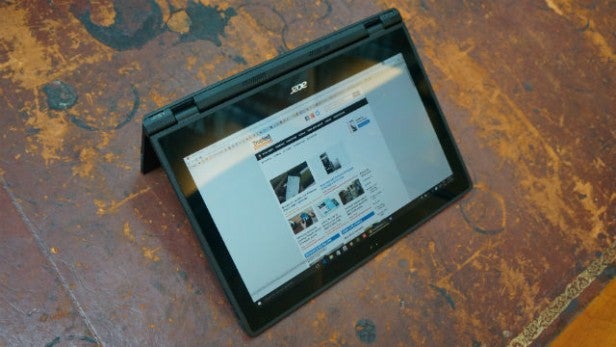 Acer recommends using the Switch in five different modes. Three of these – pad, display and tent – cast the keyboard aside. Notebook and desktop, meanwhile, involve having the keyboard either attached to the front of the unit or detached but still connected via Bluetooth.

Weighing 1.4kg, the Switch is surprisingly hefty, despite measuring in at a sleek 16.5mm thin. As a tablet you’ll do well to hold it for any more than 30 seconds, which is why the multi-functional base is so important, allowing you to prop it up on a table or your knees.

Form factor aside, the Switch isn’t the most attractive laptop I’ve ever seen. Clad entirely in angular black plastic, it’s pleasantly low-key but ordinary-looking. Quirkiness is provided in the bucket load by the weird hinge and keyboard, but Acer’s not quite managed to crack the aesthetics brief.

The power button sits on the top side, though it’s far too shallow for my liking, making it tricky to seek out with your fingers alone. Instead, you have to peer over the top just to double-check your finger’s in the right place. There are fortunately no such problems with the protuberant Start and volume buttons, which are robust and click down with a pleasantly loud snap.

Most users will be able to squeeze it into a rucksack or messenger bag without any issues. Whether you’d want to, considering the screen is constantly open to the elements, is another matter. 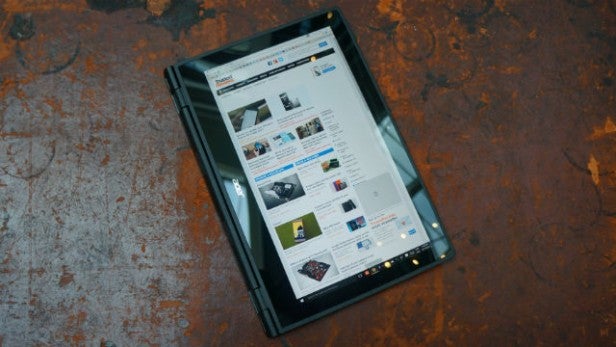 Fortunately, as it’s protected by Gorilla Glass, the Switch is capable of standing up to most everyday impacts. I spent a week carrying it around in my congested bag and I’m pleased to report that it survived the ordeal without suffering so much as a scratch.

Be prepared to brush it down on a regular basis though, since the display can’t be covered up.

The 12.5-inch, 1,920 x 1,080 touchscreen is also generally impressive. With a pixel density of 176ppi, it’s pleasantly sharp, narrowly beating off competition from the Toshiba Satellite Radius 11 (135ppi). It’s still no match for the Asus Transformer Book T100 Chi (226ppi) though. 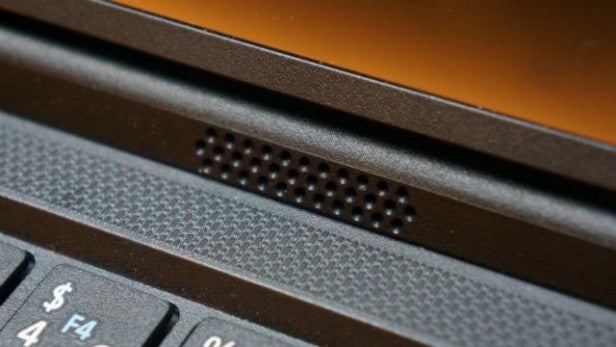 The anti-fingerprint coating successfully minimises the effects of greasy digits, while viewing angles are also generous, making the Switch a good laptop for watching movies on. The display is responsive too, reacting flawlessly to swipes and finger taps.

However, it’s not all sunshine and rainbows. The most glaring issue with the display is brightness. You’ll struggle to use the Switch outdoors on a sunny day because the maximum setting is poor.

As tends to be a problem with the majority of affordable laptops, colours also appear lifeless. Bright reds and greens are reduced to pale, washed out imitations of themselves, making vibrant pictures and movie scenes look dull.

On the other hand, there’s plenty of life in the speakers. They’re pleasingly loud, and since they’re front-facing, sound good even when you place the Switch on a soft, muffling surface, like a bed. Still, audiophiles will still be best off investing in a good Bluetooth speaker. 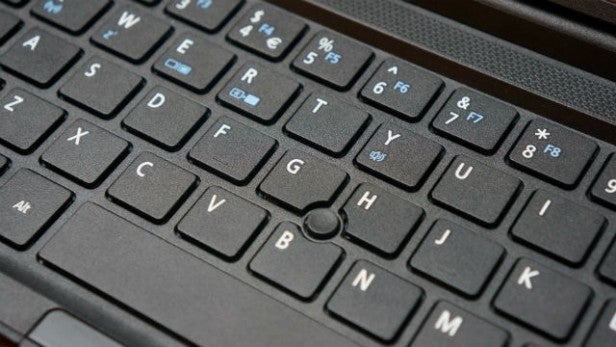 As there’s no room for one on the detachable keyboard, Acer’s done away with the trackpad, replacing it with a trackpoint. Unlike the ThinkPad series’ iconic red nipple, Acer’s concave version is stiff, shallow and as dark as the surrounding keys.

It delivers an awkward user experience, especially as there’s no space on the keyboard to rest the base of your palm. You instead need to park your hand on your desktop, which sits at a level around a centimetre below the trackpoint. I often avoided the trackpoint completely, opting to use the touch display instead. 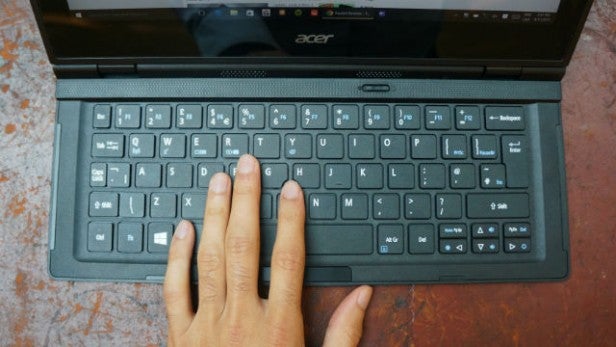 The left- and right-click buttons aren’t a great deal better. They’re small and sit flush with the surrounding plastic. Only their baby-smooth texture distinguishes them from the rest of the keyboard. Fiddly and uncomfortable.

Thankfully, it’s not all bad. The keys are well-spaced, clearly labelled and, on the whole, large. They’re a little on the shallow side, but still offer a satisfactory amount of travel.